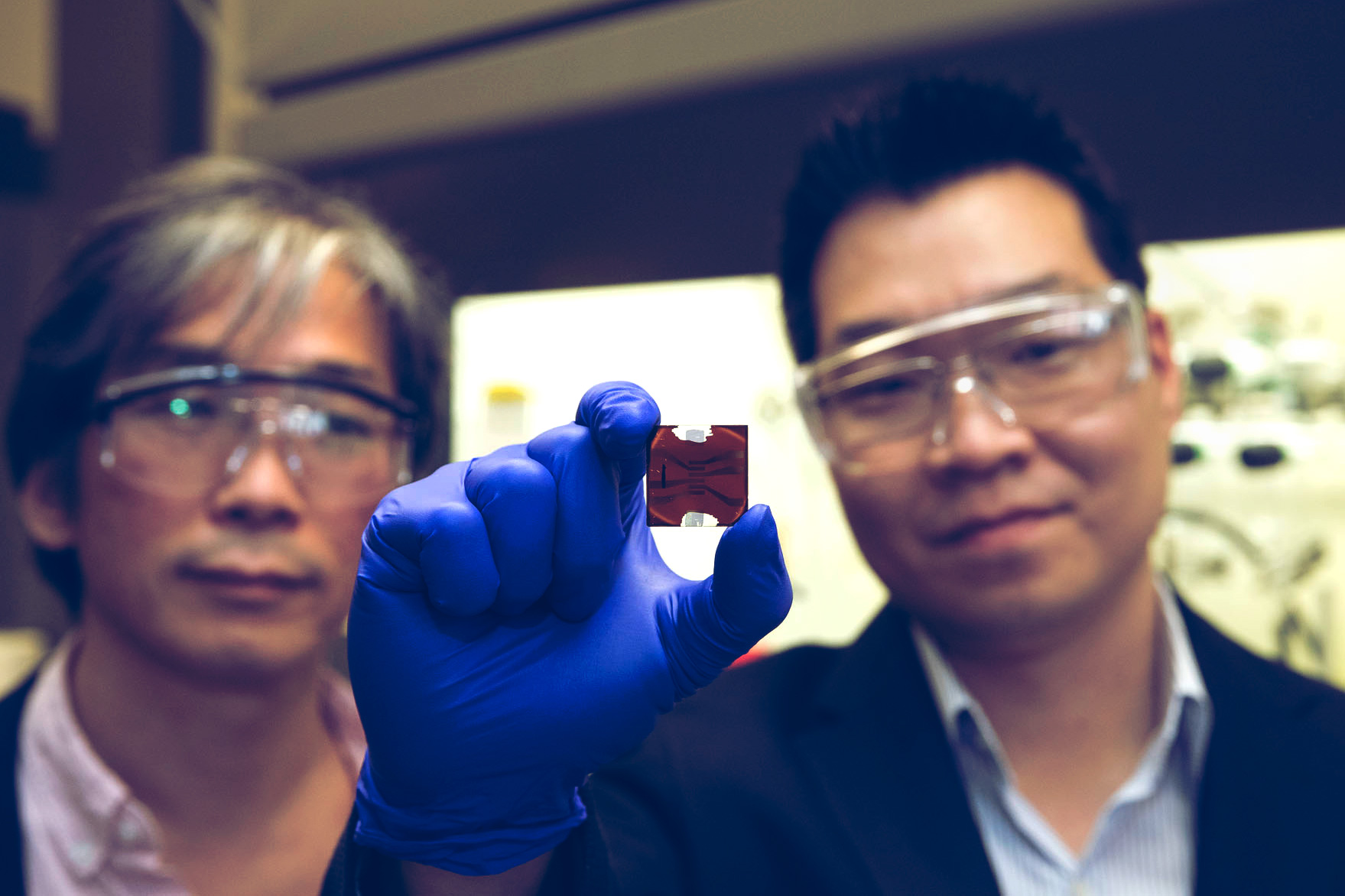 Despite the potential for powering the world with energy from the sun ­– the most abundant source of renewable energy – only about 1 percent of the world’s energy production currently comes through solar cell technology. That’s because solar cells are expensive to produce and are susceptible to efficiency reductions over time.

For this reason, scientists continue to seek new solar cell materials that will overcome these deficiencies. One of the most promising is a class of materials discovered in 2009: hybrid organic-inorganic perovskites, or HOIPs.

These are extremely lightweight and flexible materials that are inexpensive to produce, compared to traditional silicon-based cells. At 22 percent (or better) efficiency at converting energy from the sun into electricity, they are approaching the 25 percent energy-producing efficiency of silicon cells. HOIPs also are unique in that they can be applied to surfaces as a thin spray-on or paint-on coating, which could be used, when connected electrically, in a variety of settings and applications, from roofs to vehicles to backpacks. 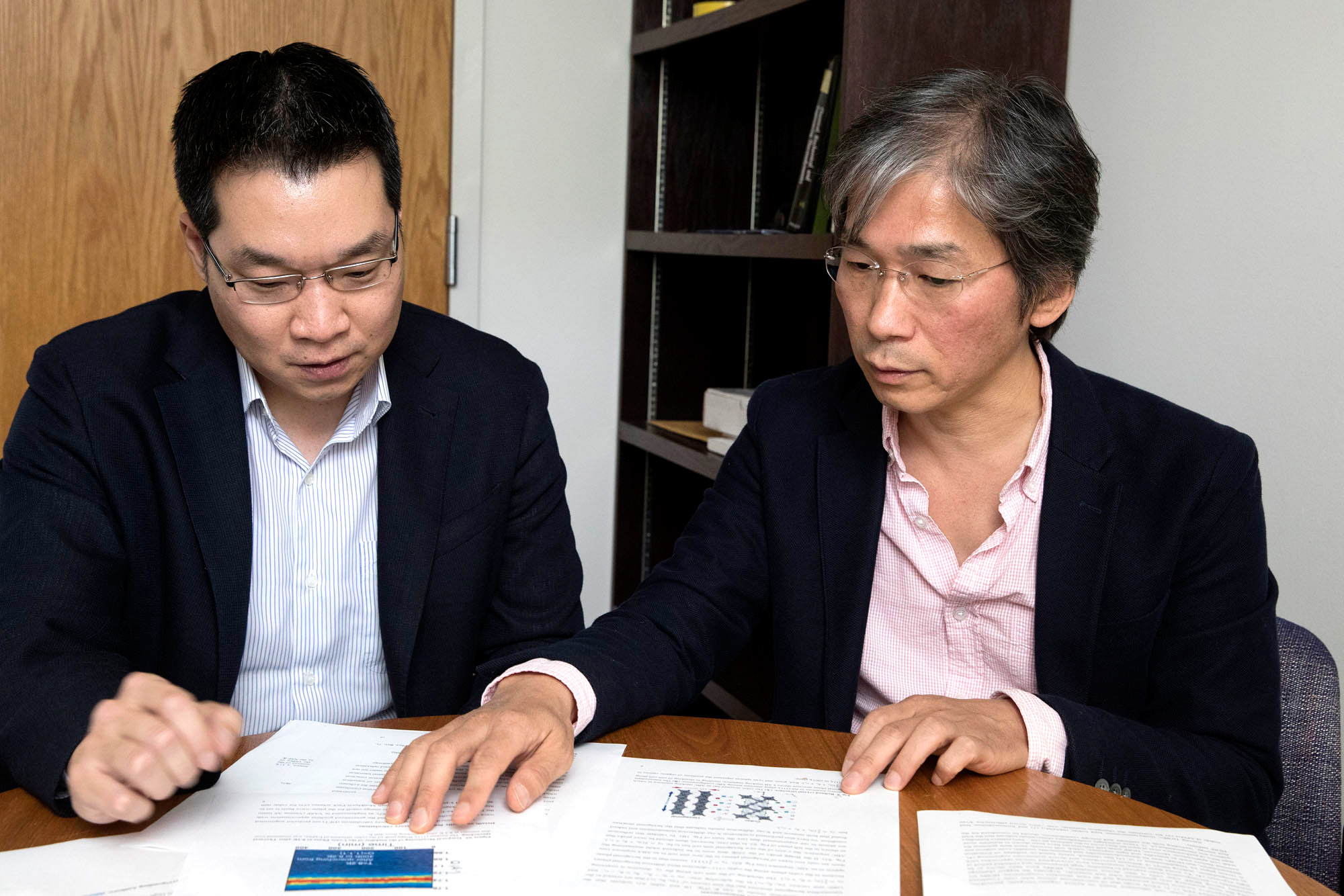 But – there’s always a “but” – HOIPS are somewhat unstable, in that they degrade in quality fairly rapidly and are particularly susceptible to temperature changes. This is because these materials’ atomic structures change when the temperature changes, and only particular types of molecular structures can work as solar cells – having the ability to capture energy from the sun and convert it into electricity.

However, scientists and engineers at the University of Virginia, with colleagues at the NIST Center for Neutron Research, the Oak Ridge National Laboratory and Cornell University, have made new inroads on understanding the fundamental physics behind how these cells work in a variety of “structural phase transitions.”

They detail their findings in a paper published Oct. 21 in the journal Science Advances, where they identify how organic molecules in the structures play a crucial role in how the phase transitions occur.

By microscopically probing the materials using neutron-scattering experiments and computer simulations, they have discovered ways to markedly expand the stable range of the desired structure for the solar cell during temperature changes. The results could potentially revolutionize solar cell technology by speeding the process of designing solar cell materials that are both efficient and stable over a wide range of temperatures, while remaining inexpensive to produce in large quantities.

The physical insight at the molecular level allows the researchers to stabilize the properties of the material in various structural phases.

“The improved stability over wider ranges of temperatures will enable application of HOIP solar cells even in extreme conditions such as on spacecraft and aircraft that operate in colder environments,” Choi said.

HOIPs may have particular applicability for situations where lightweight solar cell material is needed, such as to power electronic equipment for infantry on the battlefield, for backpackers, for autonomous or remotely controlled high-altitude drones, and for satellites.

Lee and Choi believe that HOIPs, or some variation of these materials,  will be available someday in the near future as inexpensive inks that could be printed onto rolls of paper or plastic and then used as flexible lightweight solar cells for a range of personal electronics uses.

Their research initially was funded by UVA’s College of Arts & Sciences, School of Engineering and Applied Science and Office of the Executive Vice President and Provost, and now is funded by the Department of Energy Basic Energy Sciences.

Q&A: Assessing the Risks and Rewards of Pelosi’s Plan to Visit Taiwan END_OF_DOCUMENT_TOKEN_TO_BE_REPLACED

These Giant Wind Turbines, Inspired by Palm Trees, May Be the Future of Renewable Energy END_OF_DOCUMENT_TOKEN_TO_BE_REPLACED