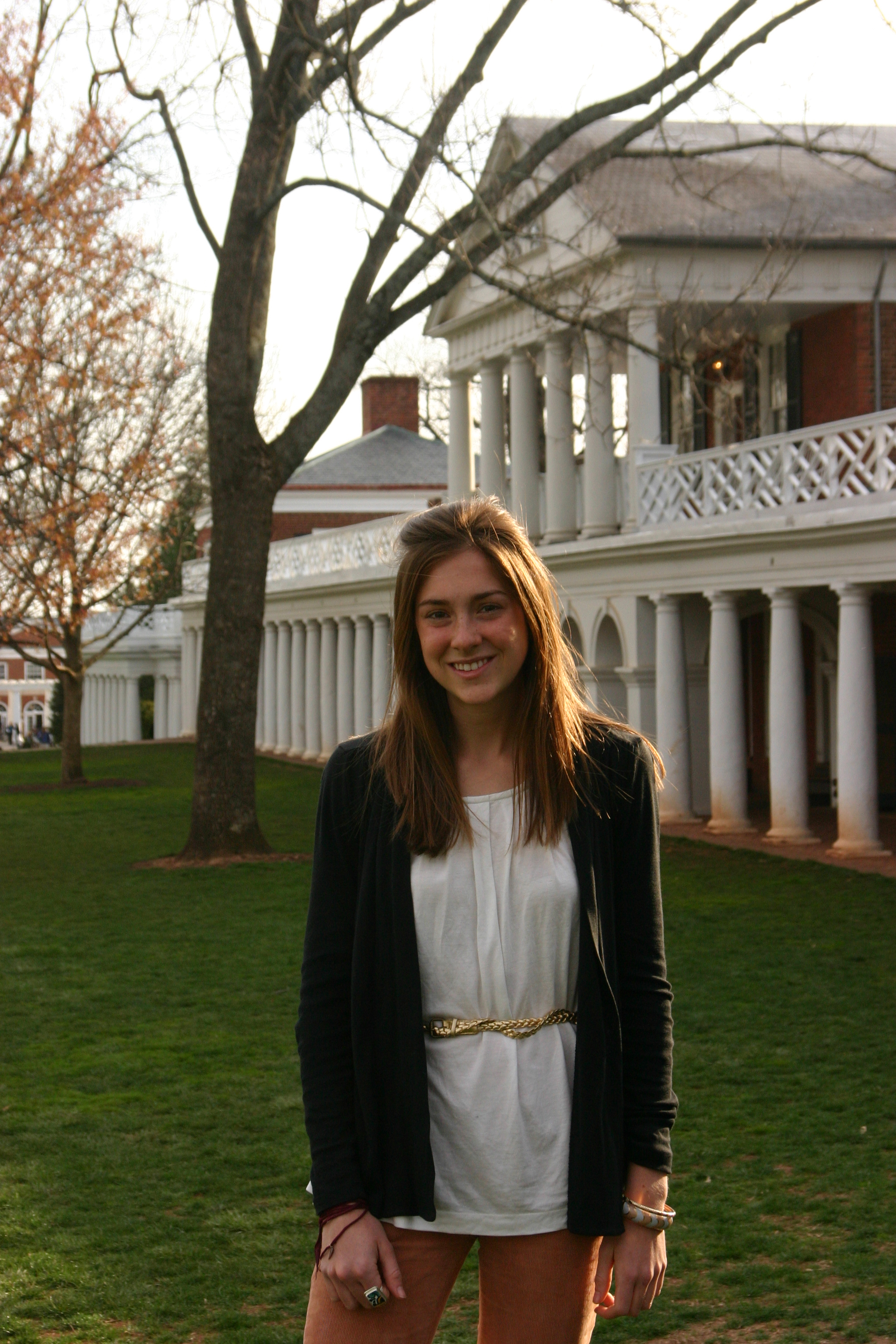 November 22, 2010 — Laura Nelson, a fourth-year political and social thought major in the University of Virginia's College of Arts & Sciences, has been awarded a Rhodes Scholarship.

She was one of 32 students nationwide to win a scholarship, and the 47th student from the University so honored since the Rhodes program was created in 1902. The scholarships, valued at between $50,000 to $175,000, fully fund two or three years of study at the University of Oxford in England, and may allow funding in some instances for four years.

"This is a total surprise," said Nelson, 22, of Westwood, Mass. "I didn't really expect it to happen and I think I am still in a state of shock. I've always had a dream of studying literature at Oxford. I am beyond thrilled to meet my future classmates and dive into life at Oxford."

Nelson said she has not yet worked out a specific course of study. An avid reader, she has taken many English classes and is writing her senior thesis on the Bloomsbury Group, a collection of writers, artists, philosophers and intellectuals, such as Virginia Woolf, John Maynard Keynes and E. M. Forster, who influenced 20th-century Western thought.

"It's impossible to know exactly what this scholarship will mean for my career and life, but I hope it will trigger new questions and ideas," Nelson said. "I look forward to reading incredible books with some of the world's top literary scholars, traveling in and around the United Kingdom and slowing down to appreciate such a special opportunity to learn and connect with others."

Nelson said there are many questions she wants to explore at Oxford, including "how to get people excited about learning outside of the formal classroom structure."

Nelson has already worked on this by being the driving force behind U.Va.'s "Flash Seminars," which gather students and faculty for a single-event discussion of one idea. The seminars, which are announced one to two weeks ahead of time, are taught by various professors and are open to students, faculty and community members.

"They can teach on any subject that excites them," Nelson said. "We want to get people to learn and discuss things. They fill up fast."

The seminars are not for credit, but simply for the love of learning.

"She sees learning itself as a practical thing," said William Wilson, an associate professor of religious studies in the College,  from whom she took courses on religion in the modern state and Faulkner and the Bible. "She wants people to see the whole scholarship mission here as a practical thing."

While Nelson wants to expand the life of the mind, Wilson said she is also "an engaging and outgoing person who is always glad to see you. She is always eager to know what you are doing and how she can help."

Michael Smith, director of the Program in Political and Social Thought– an interdisciplinary program in Arts & Sciences – praised Nelson's work ethic, her "boundless energy" and her commitment to community service.

"She's a dynamo," he said. "She will thrive in the intellectual atmosphere of Oxford. She will be fresh energy in an ancient place."

"She's a great student and a valued member of the Political and Social Thought program," Smith said. "She is interested in increasing organic learning and creating a intellectual community."

At. U.Va., Nelson is a Jefferson Scholar, a Robert Kent Gooch Scholar, an Echols Scholar and a Lawn resident. She is a member of Phi Beta Kappa, Public Service Fellows and EngageUVA, and she played varsity field hockey as a first-year student.

"I am so happy that Laura has been recognized with this honor," Lucy Russell, director of U.Va.'s Center for Undergraduate Excellence, said. "Laura is a wonderful student who has made huge contributions to life at the University."
Nelson said she will probably spend much of her life around schools and universities,

"I think I will always be learning and reading," she said. "I don't have a plan for my life. There is no perfect answer to that question. I'm excited not to know."

Created in 1902 in the will of Cecil Rhodes, British philanthropist and African colonial pioneer, the scholarships are awarded on the basis of high academic achievement, integrity, a spirit of unselfishness, respect for others, potential for leadership and physical vigor.

Rhodes Scholars go through a two-stage selection process, with the candidates first being nominated by their schools, then being interviewed by selection committees in 16 different districts across the U.S. This year, 837 candidates were endorsed by 309 different colleges and universities. These, in turn, were winnowed down to the 32 eventual winners, two from each district.

U.Va.'s last Rhodes Scholar was Tyler Spencer, a 2008 graduate who was awarded his scholarship in 2009.