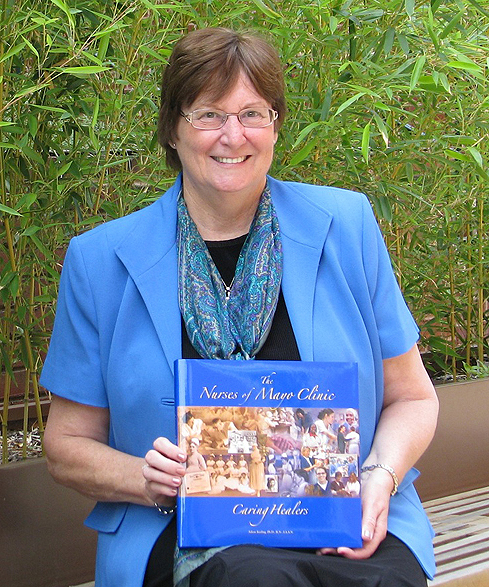 Arlene Keeling was pleased when she received word in 2012 that she’d been chosen to write the definitive history of nursing at the esteemed Mayo Clinic. But the seasoned nurse historian felt some trepidation when told she had just one calendar year to pull together a manuscript documenting 150 years of nursing at the clinic.

But she soon learned she had help. A team of Mayo historians, archivists, nurses, administrators and graphic designers was already assembled, and Keeling’s job would be to collect the historical data, synthesize the history and write a compelling narrative. Working together, Keeling and her colleagues completed the book, “The Nurses of Mayo Clinic: Caring Healers,” earlier this month. A free copy was provided to each of the clinic’s 13,000 nurses.

For Keeling – U.Va. School of Nursing’s Centennial Distinguished Professor, director of the Bjoring Center for Nursing Historical Inquiry and chair of the Nursing School’s Department of Acute and Specialty Care – the process was both exciting and emotional.

“After immersing myself in the primary data from the Mayo Historical Unit, the archives of Saint Marys Hospital and the Methodist Kahler Alumni Room, I began to see nursing’s role in the story,” she recalled. “By the time I was writing that Sister Mary Joseph, Dr. Will and Dr. Charlie Mayo died in 1939, I was in tears. Mayo Clinic’s nursing history had come to life for me, and I wanted to share it.”

Keeling’s book offers an expansive portrait of the Mayo family’s very humble beginnings as a two-person team (Dr. W.W. Mayo and his wife and first “nurse,” Louise Abigail Wright) who mortgaged their home to purchase a $600 microscope. She tells how, after a massive 1883 tornado flattened more than a third of bustling Rochester, Minnesota, the Mayos and the Sisters of St. Francis partnered to build a full-fledged hospital – Saint Marys Hospital, established in 1889 – which became the headquarters of the Mayos’ practice and played an integral role in the education and expansion of professional nursing.

Poignant, anecdotal and firmly based on a large volume of primary source data, the book documents stories meant to resonate with alumni, visitors, patients and current nurses and other health care providers, painstakingly chronicling Mayo nurses’ many accomplishments against the backdrop of social and political events from the Civil War to World War II, from the 1918 influenza epidemic to the use of iron lungs to battle the ravages of polio.

She is also the author of “Nursing and the Privilege of Prescription, 1893 to 2000”; co-editor of “Nurses on the Frontline”; co-author of “Rooted in the Mountains, Reaching to the World: Stories of Nursing and Midwifery at Kentucky’s Frontier School, 1939 to 1989.”

Keeling is currently researching nursing history as it relates to the 1918 influenza pandemic, as well as the history of nurses in migrant camps through the Great Depression. She serves as co-chair of the American Academy of Nursing’s expert panel on nursing history.

What Is the ‘4th Side’? END_OF_DOCUMENT_TOKEN_TO_BE_REPLACED