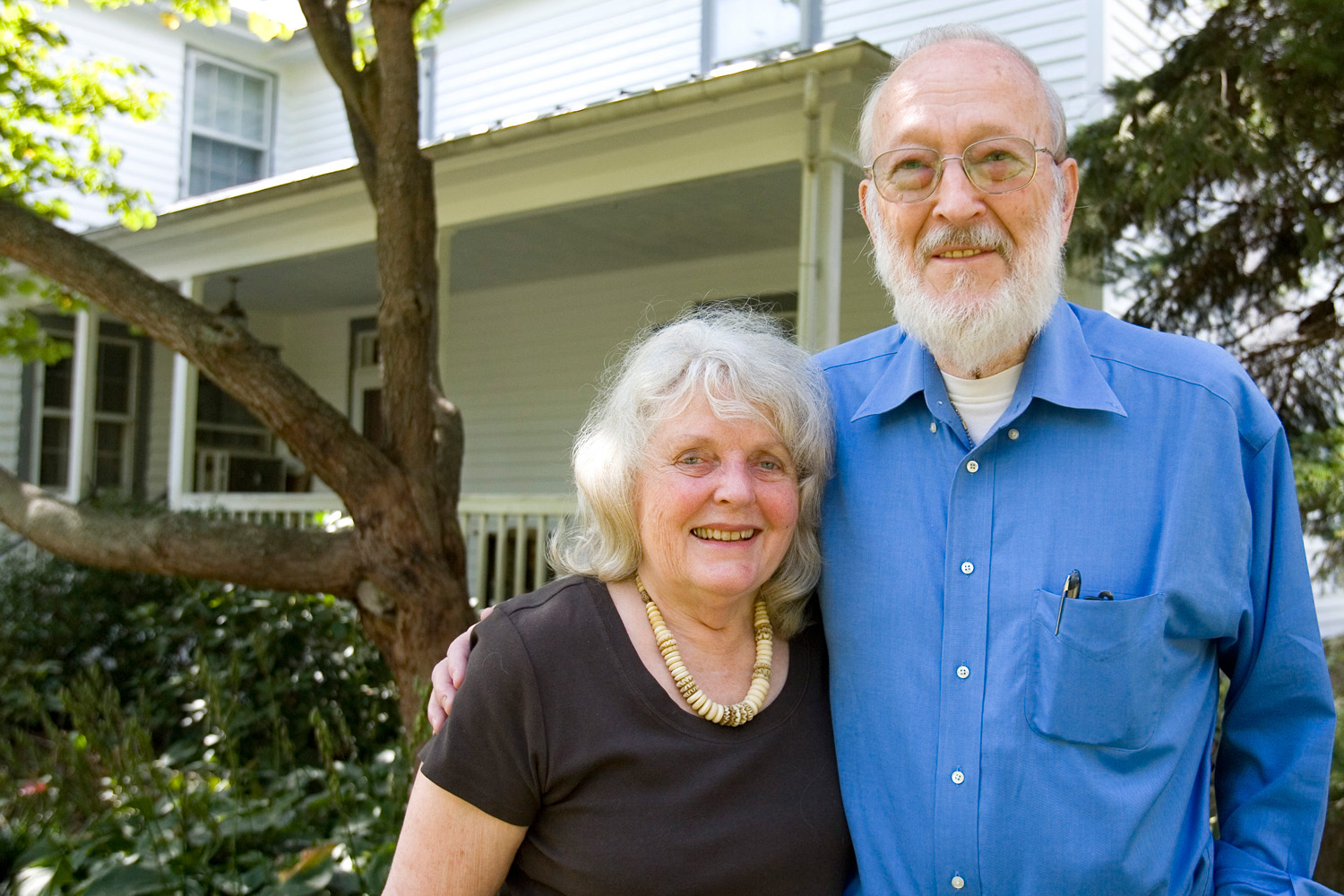 Oct. 8, 2007-- Charles Perdue is a storyteller, a farmer's son, mechanic, cryptographer, folk singer and geologist who documents the lives of working people not unlike himself. His work will continue to benefit the University and the study of folklore and music for years to come.

Because Perdue’s interests defy the tidy compartments of the University, he simply carved out a singular niche on Grounds — one part anthropology department, one part English.

Perdue’s friend and colleague in the English department, Raymond Nelson, said, “Chuck has always puzzled people. Where do you put him?”

Throughout his professional life, Perdue’s consuming interest has been the lives of others — their stories, customs and songs. In particular, he has sought to document the lives of rural working people. When he isn’t recording oral histories on his own, he is compiling and editing records and interviews from other sources: narratives on the lives of Virginia slaves, Depression-era workers, dispossessed mountain folk.

“When I first knew him, I think he was attending a black congregation up there near Culpeper and listening to the music,” Nelson said. “That takes quite a bit of doing. It’s a matter of going there for a long period of time and sitting aside and behaving. But he had done that and recorded some of the music.”

An Ivy League-educated professor studying the lives of Depression-era poor or the worship habits of Southern African-Americans could easily have resulted in something full of saccharin and starch.

But Perdue is not a typical Ivy League-educated professor. As he said, he “came in with the Depression” and spent his childhood on a Georgia farm. “My mother sang ballads and folk songs, and I grew up being rocked to sleep with the ballad about the murder of Mary Phagan, which may account for my twisted personality.”

Even as a boy, Perdue felt that he didn’t fit in. “See, if you’re too smart, or not smart enough, you’re a behavior problem,” he said. “I was too smart. I was always getting into trouble.”

When Perdue graduated from high school, he faced stiff competition for jobs. “I got out in ’47, which more or less coincided with about 10 million servicemen having been released from all the services, filling every damn job in the country.”

Perdue worked at a grocery store, rebuilt carburetors and “one thing or another tried to figure out some way of making some money.”

At a military college in Georgia, Perdue soon found his earliest calling: troublemaker. “I set a record for walking off more hours of guard report for various incendiary offenses — conduct unbecoming a cadet, failure to salute an officer, goose-stepping in ranks. I couldn’t stand it. I goofed off.

"I shouldn’t have been in college. I wasn’t ready for that. So I had the good sense not to go back.”

Perdue ended up working as a cryptographer in the U.S. Army Security Agency in California, where he later attended Santa Rosa Junior College. This time, college focused Perdue’s intellect and turned the youthful mischief-maker into something of an iconoclast. He also met his future wife and collaborator, Nancy Martin, at Santa Rosa.

“I walked into French class, and Nan was sitting in there, and I decided that was it. All I had to do was get a date with her. Never asked her to marry me, just told her we were going to, and I guess she agreed.”

Nan and Chuck — rarely mentioned separately and then never called doctors or professors or even Nancy and Charles. It is always Nan and Chuck, and they are as much professional colleagues as husband and wife.

“I think that seems to be a key to both of them,” Nelson said. “They live their interests. It’s not something they sit down at night and write down. It’s their work. It’s their lives. That’s why it can’t be Charles Perdue and Nancy Perdue; it’s Chuck and Nan. They’re inseparable.”

Nan and Chuck married and moved in 1955 to University of California-Berkeley, where he earned a degree in geology. The young couple began singing in the local folk-music coffee houses. “The Kingston trio recorded ‘Tom Dooley.’ Nan and I heard it and said, ‘We can do that.’” Perdue called their performing “good therapy.” Soon they were holding “therapy” sessions at legendary venues like the Troubadour Club in Los Angeles and the Ash Grove in Hollywood.

The world’s only husband-and-wife-geologist-folk-singing duo soon found themselves in Washington, D.C., where Perdue worked for the U.S. Geological Survey. Perdue founded the Washington Folklore Society, while once again he and Nan were playing in clubs and living rooms in the metro area.

One of Perdue’s greatest collaborations began as a chance encounter. In 1964, he had stopped at a service station in Fairfax, Va., and ran into a musician named John Jackson.

“Jackson was holding a guitar, so I said, ‘Do you play that thing?’ He said, ‘Yeah, I can hit a couple of chords.’” Perdue asked him to hit a few, and the man played “Candy Man,” legendary bluesman Mississippi John Hurt’s signature song. Jackson went on to become a blues great. Nan and Chuck introduced him to the world, acting as his unofficial managers and promoters. They also became his close friends.

After Perdue completed his Ph.D. in folklore at the University of Pennsylvania in 1971, he drew the attention of U.Va. English department professor and chairman E.D. Hirsch, who was interested in socio-linguistics, then a new field of theory being taught at Perdue’s alma mater.

Perdue said, “I had just come from Penn and could rattle off all the latest, hot bibliography and stuff that was happening. Hirsch hired me on the spot. I didn’t send in a vita. I didn’t interview with anybody else in the English department.”

The University was fortunate to get him. Perdue has been a prolific writer and a wise teacher. His books, “Talk about Trouble: A New Deal Portrait of Virginians in the Great Depression,”  “Pigsfoot Jelly & Persimmon Beer: Foodways from the Virginia Writers’ Project” and “Weevils in the Wheat: Interviews with Virginia Ex-Slaves,” are considered classics and standard issue in history, anthropology and folklore classes.

The University was also fortunate to get Nan Martin-Perdue in the bargain. When Chuck came aboard in 1971, appointments for professor’s spouses were considered nepotism. (Today, the practice is commonplace). Over the years, Nan served as a de facto scholar-in-residence for the University, although she received no salary and no pension.

In 1980, the Perdues established the Kevin Barry Perdue Folklore Archive at the University. Named for their son who died in 1979, the archive is a collection of folk songs, histories and documents from the Depression-era Virginia Writer’s Project.

“Talk about Trouble,” which they co-edited, won the National Oral History Association Award for best book on oral history for 1997. It consists of oral histories recorded by members of the Virginia Writer’s Project, which Chuck and Nan discovered hidden in the Virginia State Archives. By copying them, they saved these narratives from imminent disintegration due to age, moisture and acidic ink.

Edward D.C. Campbell Jr., editor of the Virginia state library’s Virginia Cavalcade history journal, said, “‘Talk about Trouble’ is a remarkably moving testimonial. No other first-person collection reveals as much about how ordinary Virginians, and by extension Southerners and other Americans, confronted the palpable threats raised every day by the Great Depression.”

While Perdue’s writing established his scholarly reputation, Nelson believes that teaching has been an equally important part of Perdue’s legacy. “The really dangerous thing about academics is they get very lofty in their interests and concerns, but Chuck’s very earthy. He teaches people to be curious and that’s the best thing you can teach someone.”

Perdue’s earthy beginnings and his own curiosity have taken him from a Georgia dirt farm to legendary folk clubs, to the University of Pennsylvania and finally to the University. In “Talk about Trouble,” Chuck and Nan wrote, “Life as an academic in a university setting was not, then, among the options either [editor] recognized as desirable or thought to be attainable. But both editors were also products of the same changing cultural values and rising expectations with regards to higher education that affected so many of the people interviewed as part of the New Deal life history projects in Virginia.”

The lives of the ex-slaves and Depression-era workers Perdue wrote about were much like his own. Sometimes — like folk songs and blues — out of the chaos and struggle of individual lives, something unique and artful emerges.

Here Is What You Need to Know About the New Coronavirus Variant, Omicron END_OF_DOCUMENT_TOKEN_TO_BE_REPLACED

Fall Is in the Air on Grounds END_OF_DOCUMENT_TOKEN_TO_BE_REPLACED

Meet the Cats and Dogs Your CVC Donation Supports END_OF_DOCUMENT_TOKEN_TO_BE_REPLACED