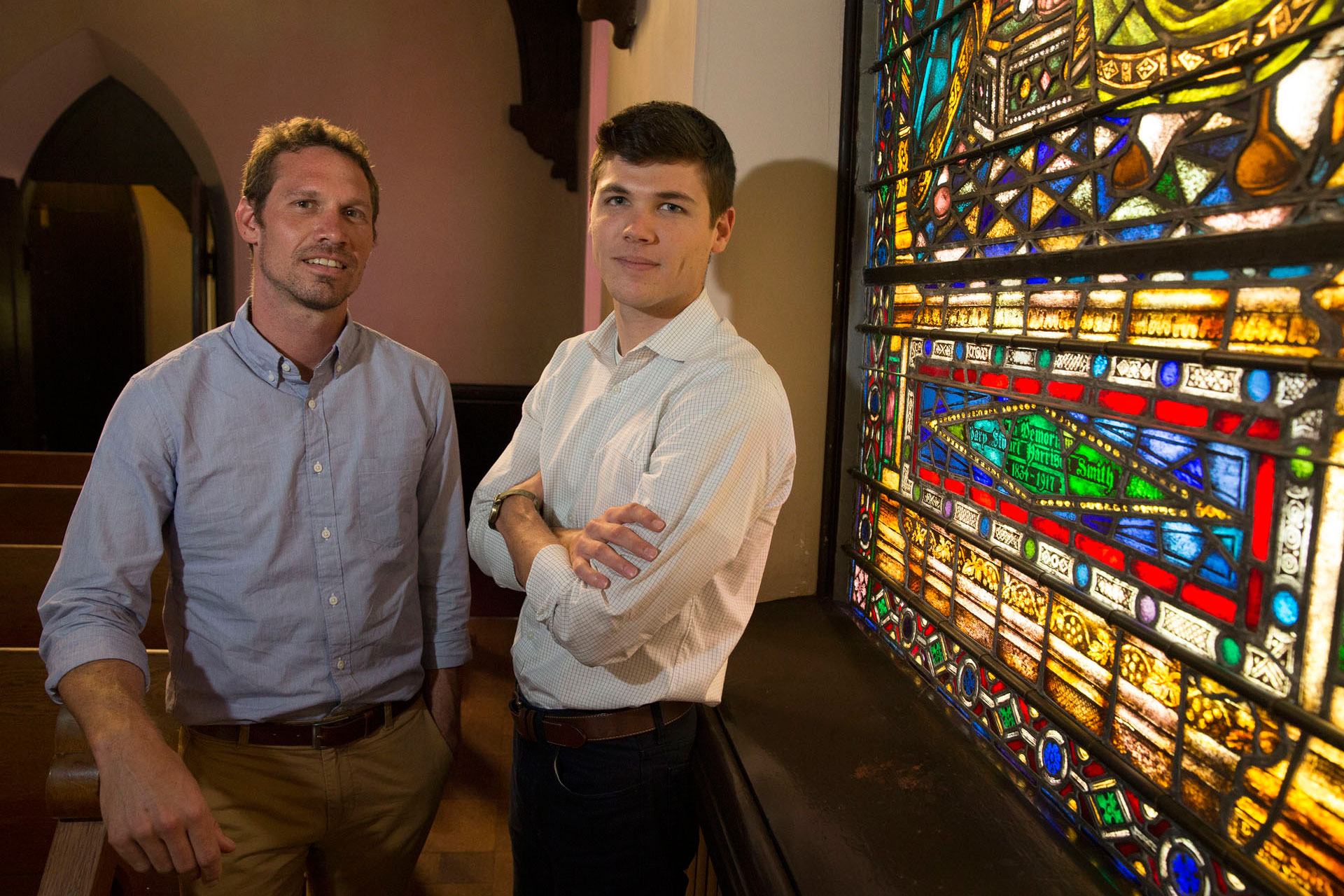 Two University of Virginia researchers traded desks for pews, journeying to Protestant churches across America to better understand the role they play in today’s political climate. Their new book, “Kingdom Politics,” examines how churches can transcend partisan politics as they approach the 2016 election and face declines in America’s Christian population, as indicated by a recent Pew Research Center study.

“In the wake of the religious right and the decline of the mainline church, churches need to consider how we engage with politics and think about ourselves as a political body, from minute local practices to bigger national issues,” said researcher Kristopher Norris, a religious studies doctoral student. “We want to work on how to do this in faithful ways that are not co-opted by partisan politics.”

Funded by a grant from U.Va.’s Project on Lived Theology, Norris and co-author Sam Speers, who graduated in 2014 with a bachelor’s degree in religious studies, traveled to five churches spanning the political spectrum. Each began the journey concerned about divisive political rhetoric and declining church attendance.

“I have always been really averse to ideologically charged, partisan bickering, and I thought that meant I would never go into politics,” Speers said. “Instead, I have learned to channel that energy into finding new ways to improve or change the way we engage in politics.”

“I came into the project wary of the ways that churches engage in politics and worried they often go too far,” he said. “What we found changed my perspective on what is possible.”

“Far from simply trying to get the right person in the White House,” Norris said, “they saw the church as being able to eliminate poverty on its own, without the state.”

The next stop on their cross-country trek revealed a different approach. At Solomon’s Porch in Minneapolis, which belongs to the postmodern Emergent Church movement, church members openly discussed politics during services or activities, but mandated that each perspective be countered with an opposite viewpoint.

A small-town Mennonite church in Indiana, part of a denomination known for avoiding the political fray, began advocating for local and national immigration reform once they encountered a growing local population of Latino immigrants.

Other stops had a lengthy history of political engagement. First & Franklin Presbyterian Church in Baltimore made gay rights a centerpiece of its ministry decades ago. In Atlanta, Ebenezer Baptist Church – the home church of the Rev. Dr. Martin Luther King Jr. – has long embraced politics and counts Barack Obama, then a presidential candidate, among its guest orators.

Even amid such activity, Norris and Speers found many churches hesitant to brand themselves as political, concerned about being perceived as divisive or extremely partisan. They believe this worry springs from a narrow definition of politics focused on hot-button issues; instead, they offer a broader definition based on three components: allegiance, citizenship and values.

Churches, the pair argue, can understand their politics within an allegiance to a higher power that sometimes aligns with the state and sometimes works outside of it. They can use that understanding, which Norris and Speers term “kingdom politics,” to live out a day-to-day political mission independent of any particular party.

“When you are confident in where your allegiance lies and what your values are, you can carry out political actions in your worship or on a local level, and also engage in certain partisan issues without being completely co-opted by a Republican or Democratic agenda,” Norris said.

Norris recalls how the Baltimore church, during the 1980s HIV/AIDs crisis, instituted a “passing of the peace” ritual, in which each parishioner embraced his neighbor during the service. That simple change ensured that parishioners afflicted with the disease and associated stigma would feel the comfort of a human embrace at least once per week.

Other examples include a community garden at the Mennonite church bringing together community members from diverse backgrounds and a church prayer list that notes the deaths of both Iraqi civilians and American soldiers.

“Using your daily church activities and worship to shape your politics allows you to engage in state politics, but understand it as something that is not bound by partisanship,” Norris said.

The pair predicts that these independent, micropolitical actions will become more important in the polarized climate of the 2016 election.

“People are so wary of churches being engaged in politics,” Norris said. “I wonder if you may see less overt statements or endorsements from churches and more localized efforts.”

Speers agreed, pointing out that the growth of America’s non-religious population, as indicated in the Pew survey, creates less pressure for Americans to identify as culturally Christian if they do not believe in Christian teachings.

“I think that, on the left and on the right, you are going to see less lip service to broadly Christian language and vocabulary,” he said. Given that shift, churches need to seek new ways to engage with the community politically.

Speers and Norris hope that, by offering lessons learned from their five case studies, their book will help other churches navigate the boundary between overtly partisan politics and perceived political apathy.

What Is the ‘4th Side’? END_OF_DOCUMENT_TOKEN_TO_BE_REPLACED