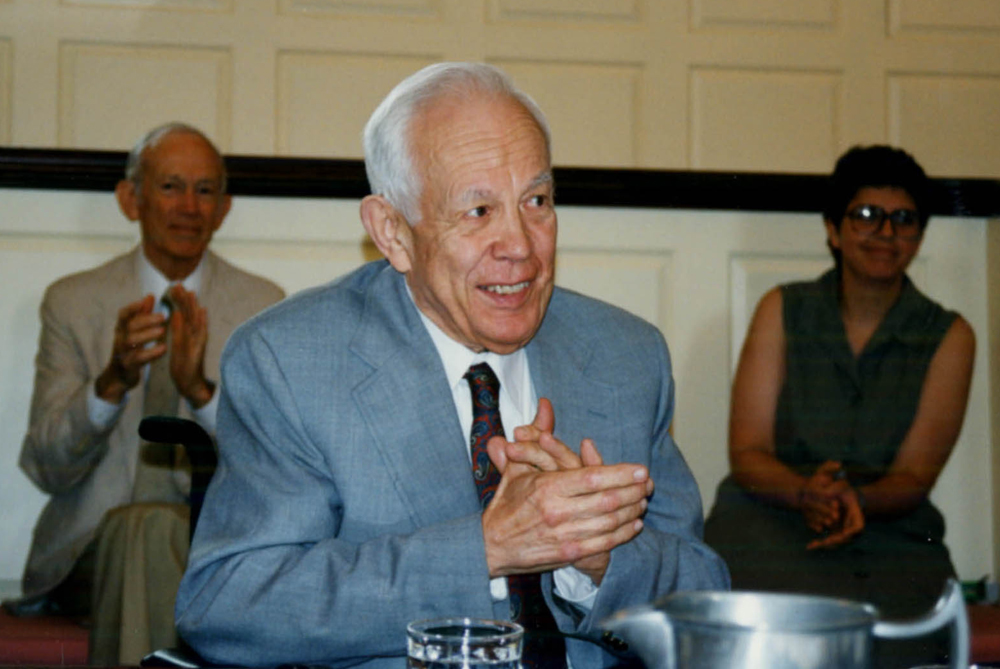 Kenneth W. Thompson, 91, a pivotal figure in the history of the University of Virginia’s Miller Center, died Feb. 2. A scholar of international relations and the American presidency, Thompson served as the Miller Center’s director from 1978 to 1998.

“The Miller Center would not be what it is today without the inspiration and passion of Ken Thompson,” said Gov. Gerald L. Baliles, director and CEO of the Miller Center. “Ken initiated much of the work that continues to this day. Because of him, presidential history that might otherwise have been lost will be preserved for generations to come. Ken will be greatly missed, but his legacy will live on as we carry on what he started.”

Having received his Ph.D. from the University of Chicago in 1950, Thompson taught there and at Northwestern University. He began teaching at U.Va. in 1975, the year of the Miller Center’s founding, as Commonwealth Professor of Government and Foreign Affairs. In 1978, he became White Burkett Miller Professor of Government and Foreign Affairs, and was appointed director of the Miller Center of Public Affairs, devoted to advancing the understanding of the American presidency.

After his retirement as director in 1998, Thompson continued to chair the Forum Program until 2004. In recent years, he had provided guidance on forum operations and scheduling. The Miller Center’s Kenneth W. Thompson wing, which houses its Scripps Library, was built in 2003 and named in his honor.

Thompson received eight honorary degrees and held endowed lectureships at Riverside Church in New York City, Duke University and New York University, among others. He is the author of numerous books and has served as vice president for international programs at the Rockefeller Foundation as well as director of higher education for development at the International Council for Educational Development.

Thompson earned his undergraduate degree from Augustana College in 1943, and was a U.S. Army veteran of World War II, serving in the infantry and in counter-intelligence.

He is survived by three sons, Kenneth C. Thompson, Paul A. Thompson and James D. Thompson; and a stepdaughter, Carolyn C. Thompson.

The Miller Center is working with the Thompson family to plan a memorial service in his honor in the coming weeks.

Fall Is in the Air on Grounds END_OF_DOCUMENT_TOKEN_TO_BE_REPLACED