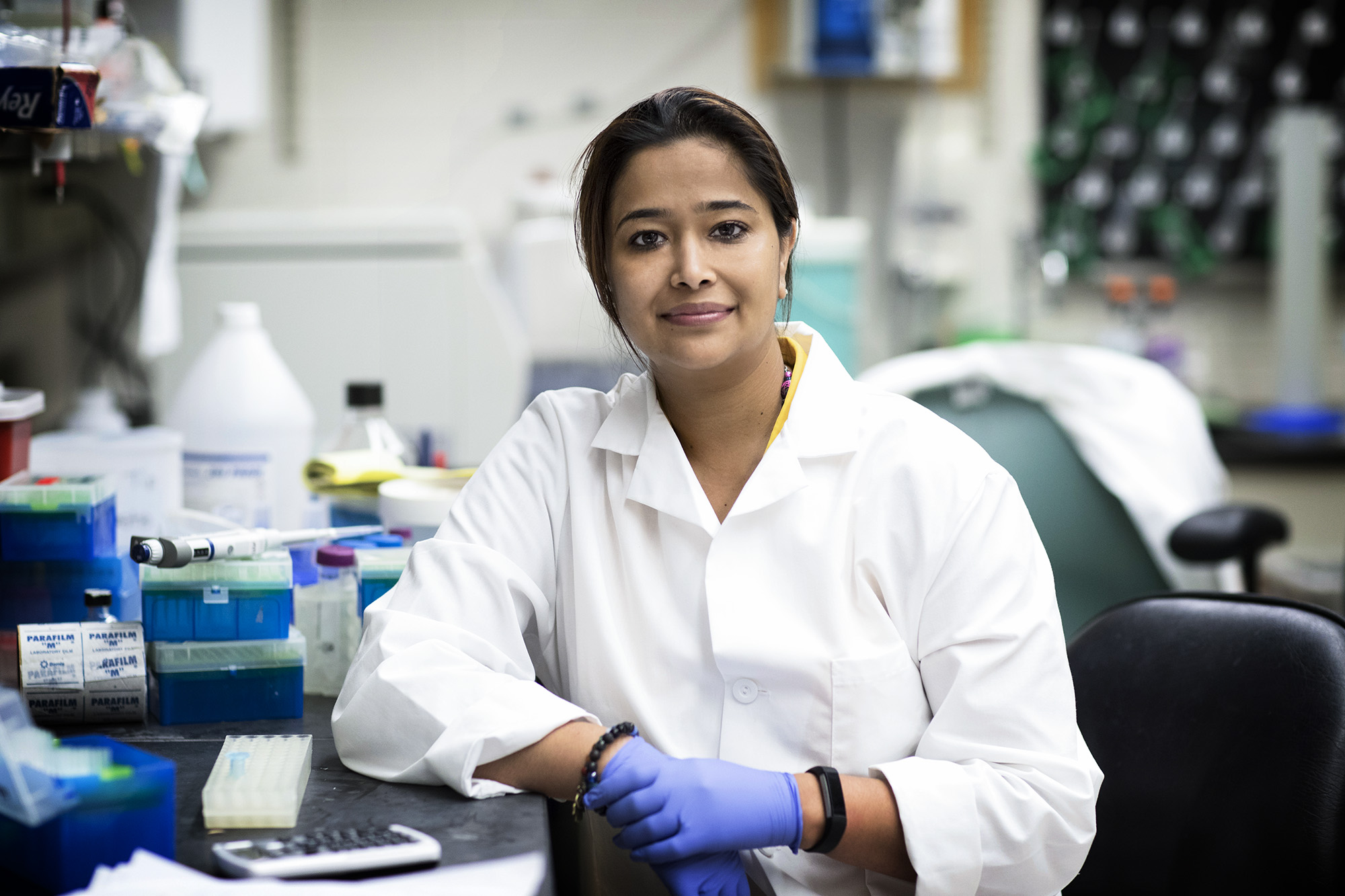 A University of Virginia School of Medicine scientist is developing an innovative gene therapy she hopes will slow disease progression and improve movement, coordination and communication in children with Rett syndrome. The approach also may be useful for battling other genetic disorders involving the X chromosome.

UVA researcher Sanchita Bhatnagar discovered that tiny bits of RNA, called microRNAs, play an important role in Rett, a rare genetic disorder that can impair children’s ability to speak, move and even breathe. Based on that finding, she is seeking to sop up those RNA bits, called microRNA, using absorbent particles called microRNA sponges.

Early work in lab models has produced promising results, and she hopes the approach could lead to a better quality of life for children with Rett.

“We are seeing that lab animals treated with this gene therapy are more mobile. They’re moving faster, they’re smarter,” Bhatnagar said. And if that translates into even modest improvements for children, it could make a big difference, she said: “If we can help a child to move more independently, or improve their ability to communicate, I think for a parent, that’s a big win.”

Rett syndrome affects approximately 1 in 10,000 children, almost exclusively girls. That’s because it’s caused by a mutation in the MECP2 gene found on the X chromosome. Girls have two X chromosomes, while boys have an X and a Y.

Bhatnagar’s discovery of the role of microRNA in Rett came as a surprise, because it was the first time microRNA had been linked to X chromosome biology. That finding dovetailed perfectly with her lab’s expertise in creating microRNA sponges that can target microRNA, absorbing it and then breaking it down.

“We are not altering the genomic DNA,” Bhatnagar emphasized. “We are just using them [the microRNA sponges] as inhibitors that are delivered through [adeno-associated viral] vectors. These vectors do not go and integrate into the genome, so we hope for minimal secondary effects.”

Bhatnagar hopes her new approach could be useful both for treating Rett and other genetic disorders that involve the X chromosome, such as Fragile X syndrome, a condition that causes learning disabilities, developmental delays and behavioral problems. To advance her research toward patient impact, she works with the UVA Licensing & Ventures Group to navigate patent protection and industry partnerships. After disclosing her discovery to the Licensing & Ventures Group in 2019, Bhatnagar presented her research and attracted a top expert in developing new gene therapies, Kathrin Meyer of the Abigail Wexner Research Institute at Nationwide Children’s Hospital, as a research collaborator. Massachusetts-based Alcyone Therapeutics Inc. is sponsoring the research at both UVA and the Wexner Research Institute to support its transition to clinic.

The research collaborators hope to begin clinical trials in the near future. If the initial trials prove safe and successful, that would lead to larger trials to evaluate the effectiveness of the approach. The federal government would then consider the trial results to determine if the approach should be approved as a treatment.

“We think what Dr. Bhatnagar has come up with is very elegant, and we are excited about its potential to improve the lives of many patients,” PJ Anand, CEO of Alcyone Therapeutics, said. “The beautiful part is that this gene therapy is what we call in the industry a ‘pipeline in a product.’ The exact same gene therapy product can be used to potentially address diseases that are caused by other genes on the X chromosome. Once we have the initial proof of concept in the clinic for the first disease, we can use much of that same information to move toward clinical trials in other X-linked diseases as well, so it will really be an efficient path forward.”

Bhatnagar, of UVA’s Department of Biochemistry and Molecular Genetics, said she feels “very emotional” about the potential clinical implications of her work, especially knowing the dramatic impact Rett has on the affected girls and their families.

Rett syndrome leads to severe impairments, affecting nearly every aspect of a child’s life. “It’s often a full-time job as a parent, because these girls need assistance with all their living skills,” Bhatnagar said. “I don’t know if this therapy is going to fix all of that. But it may be able to help them, and any help will be a big step forward.”

The early-stage studies for the project in Bhatnagar lab were supported by the Hartwell Foundation and the UVA Brain Center.

When Less Is More: How Harnessing the Power of Subtraction Can Add to Life END_OF_DOCUMENT_TOKEN_TO_BE_REPLACED