UVA Scientists Use Synthetic Gene and Magnets to Alter Behavior of Mice, Fish 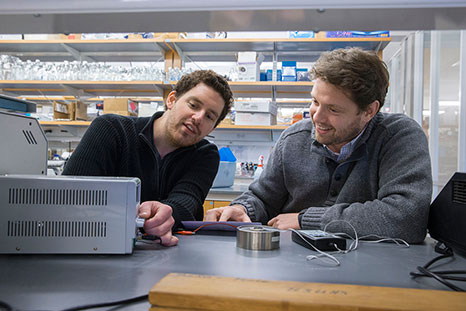 Michael Wheeler, left, and Ali Deniz Güler engineered a synthetic gene that, used in conjunction with a magnetic field, allows them to control neural circuits. (Photo by Dan Addison)

University of Virginia scientists have demonstrated that neurons in the brain that have been supplemented with a synthetic gene can be remotely manipulated by a magnetic field. The finding has implications for possible future treatment of a range of neurological diseases, such as schizophrenia and Parkinson’s disease.

“We may have discovered a major step toward developing a ‘dream tool’ for remotely controlling neural circuits, by manipulating specific cells using engineered gene products that respond to magnets,” said Ali Deniz Güler, a UVA biology professor who led the study in his neuroscience lab.

The finding is published online this week in the journal Nature Neuroscience.

“We wanted to activate with magnetism a specific set of neurons in the brain responsible for pleasure,” Güler said.

Using gene therapy to insert the gene, they expressed the synthetic gene in adult mice or in zebrafish embryos, and witnessed remote activation of neurons the presence of a magnetic field through the altered behavior of the animals.

“We have validated that we can turn on cells in the brain with simple magnets, something that has not been achieved before,” Güler said. “We are actually magnetically evoking behavioral responses in animals by creating a cell that can sense magnetic fields. This could pave the way toward eventually treating neurological diseases through magnetism. It is precise and noninvasive.”

Güler and Wheeler call their synthetic gene “Magneto,” after a Marvel Comics cartoon character who can alter magnetic fields.

Mice without the Magneto gene did not display any behavioral changes in the presence of magnets.

“The mice were hanging out in the magnetic chamber because they were experiencing some pleasure there, since we were remotely turning on the neurons that signal reward,” Wheeler said.

In the team’s studies on zebrafish embryos, the embryos responded to a magnetic field by twirling, which they generally do in response to pressures in the water. When the magnetic field was removed, the embryos greatly reduced their twirling behavior.

“These response behaviors, in two separate species of animals, validate that the cells containing the synthetic gene turn on in a magnetic field,” Wheeler noted. “This field can penetrate the brain regardless of tissue density – like MRI – and can turn on specific circuits at a specific time, whenever the test subject is within the magnetic field.”

Güler added, “If we can use gene therapy to exert control over neurons, the potential exists to modify or eliminate the effects of certain neurological diseases by controlling ill-firing neural networks. Our method may be one possible approach.”

He emphasized, however, that at present the method is being used to better understand brain development, function and pathology.