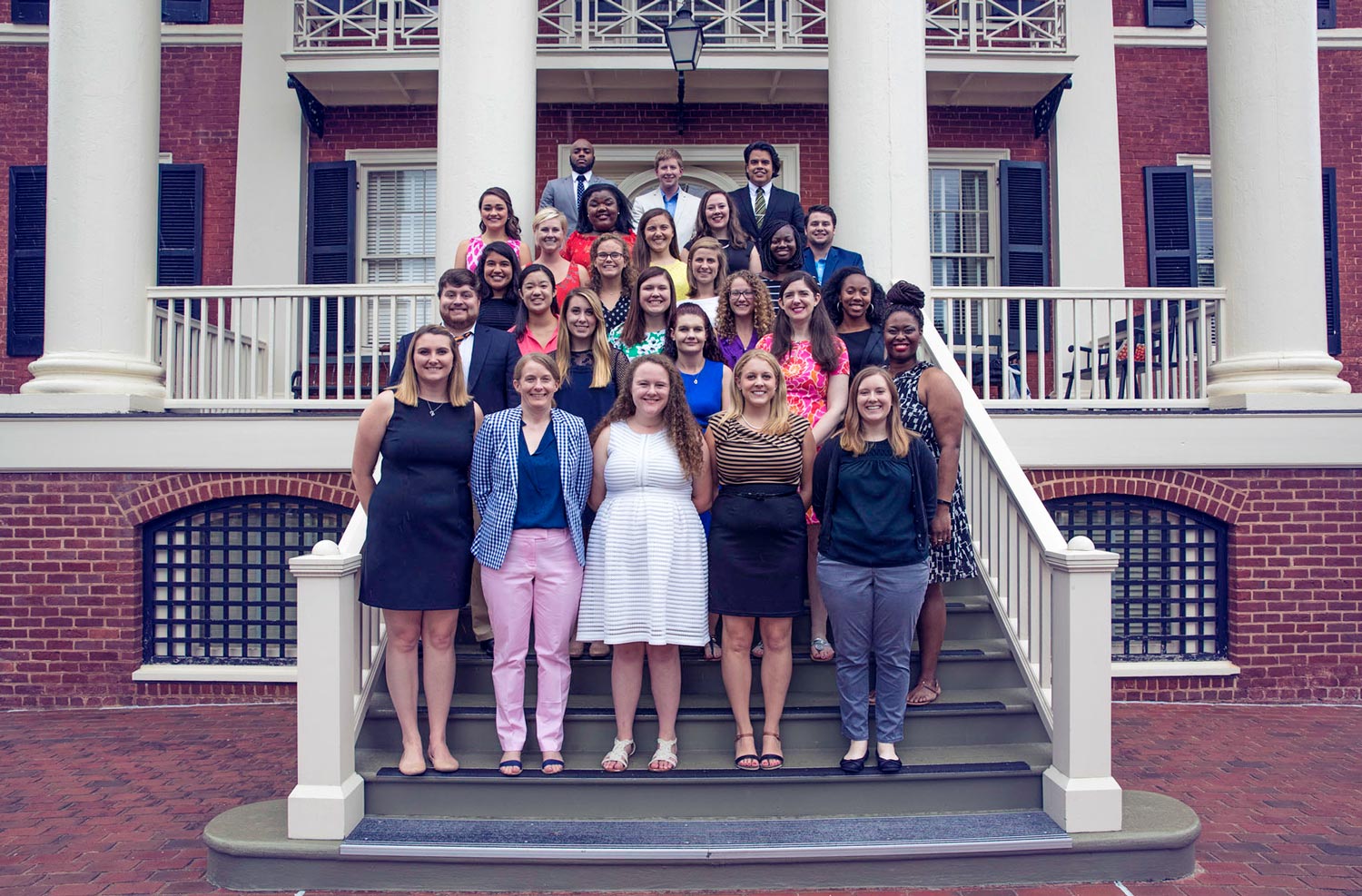 Members of the Virginia College Advising Corps will work with high school students who might not otherwise consider going to college. (Photo by Dan Addison, University Communications)

Those who have just finished their own college experiences are some of the best to guide their slightly younger peers to higher education.

This is the philosophy behind the Virginia College Advising Corps, though which recent graduates of the University of Virginia, UVA’s College at Wise and Radford University will spend the next year guiding high school students toward college.

Twenty-four recent graduates including 21 from UVA, make up the corps. They will spend the next academic year in Virginia high school counseling offices, working with students who might otherwise not think about higher education. The advisers help students navigate financial aid questions, arrange college visits and assist with college preparation.

“Statewide, the trend has been for postsecondary enrollment rates to remain steady. However, we see an increase in enrollment rates from our partner high schools,” said Joy Pugh, director of the Virginia College Advising Corps. “This amounts to thousands more low-income and first-generation students going to college who wouldn’t have without the support and assistance of a college adviser.”

In 2016-17, Virginia College Advisers served 5,184 seniors and 1,126 parents, tallying 2,667 financial aid submissions, a leading indicator of whether or not students will proceed to college.  The advisers helped students to secure more than $39 million in institutional aid, and more than $6 million in scholarships. According to National Student Clearinghouse, advisers’ partner high schools have seen an average increase in post-secondary enrollment anywhere between 2 and 17 percentage points, with a program average of 6 percentage points.

According to the State Council of Higher Education for Virginia, postsecondary enrollment rates remained between 71 percent and 72 percent during the period of 2008-2014. Schools with advisers saw more than a 6 to 9 percentage point increase during that same period.

The program started 12 years ago at UVA and has since grown into a national non-profit organization that operates in 14 states. This year in Virginia, the two dozen college advisers will serve 28 high schools; since the program’s inception, more than 120 UVA graduates have fanned out across the commonwealth to assist high school students in their higher-education decisions. The advisers make a two-year commitment to the program.

“Our program works because of the incredible people who become college advisers,” Pugh said. “The dedication that they have to their students, and to serving these communities, is genuine and tireless. They are providing information, advice and encouragement at a critical turning point in a young person’s life.”

Some advisers said they want to offer students some of the advantages they had.

“I grew up with a supportive family and school system where it was normal and expected to go to college directly after high school,” Yorktown native Robin Yeh said. “However, I know that isn’t the case for every student, so I want to help fill that gap and be the resource for students to understand the importance of college and how to succeed there.”

Many advisers, such as UVA-Wise graduate Allie Robinson Brickey of Clintwood, can identify closely with the students they will mentor.

“I applied to be an adviser because I want to give high school students the help and information about college that I didn’t receive when I was in school,” Brickey said. “I hope to be able to work with a college or with students after my time with the Advising Corps.

“Every student deserves the opportunity to access higher education,” Pugh said. “There are many paths available – a four-year school, two-year school, certificate programs, trade schools, etc. – but executing the steps to make that plan a reality is essential. We work with each individual student to determine the best path for them, taking into account academic match, cost of attendance and many other factors. And then we ensure that each step is completed, whether it is taking the SAT or ACT, filling out college applications, submitting the Free Application for Federal Student Aid, or anything else necessary for that student’s success.”

This year’s College Advisers are: