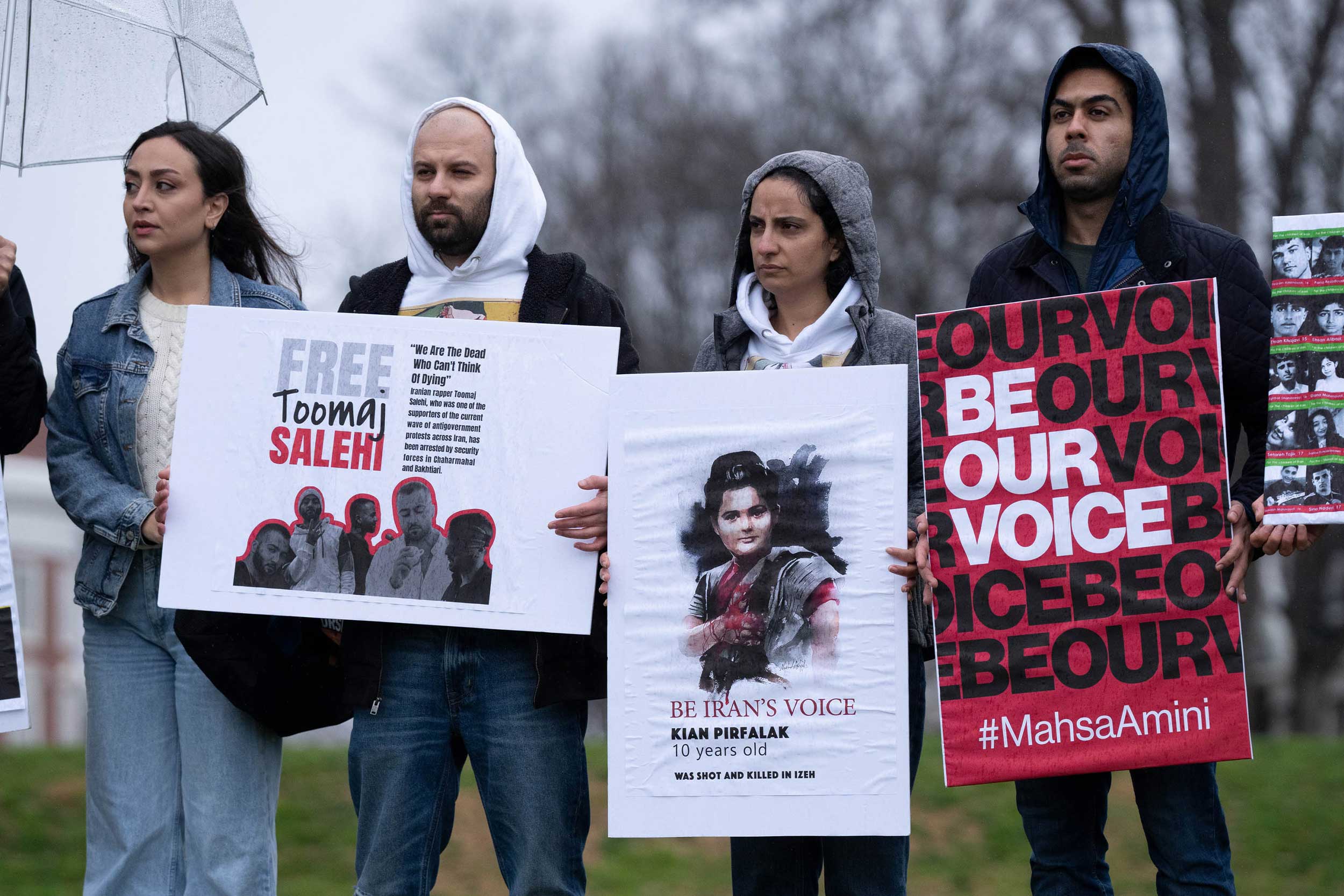 Members of UVA’s Iranian Student Association stand up for those arrested and killed in two months of protests in Iran. (Photo by Sanjay Suchak, UVA Communications)

Spirits undampened by a chilly rain, dozens of University of Virginia students gathered on the Lawn at noon Wednesday to show support and solidarity with Iranians arrested or killed while protesting their country’s restrictive, female-specific morality laws. 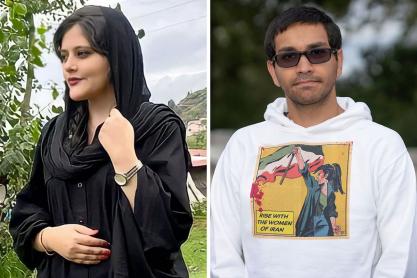 Wielding signs emblazed with “women, life, freedom,” the slogan used in demonstrations across Iran and the world, the UVA protesters joined an international day of protest organized through the Iranian Scholars for Liberty.

“We’re doing it because we love Iran and we want to make our people heard,” said Abtin Afshar Shandi, president of the Iranian Student Association at UVA. “Iran has been under this dictatorship for 40 years and want Western countries to hear us and apply more pressure to the [Iranian] government. 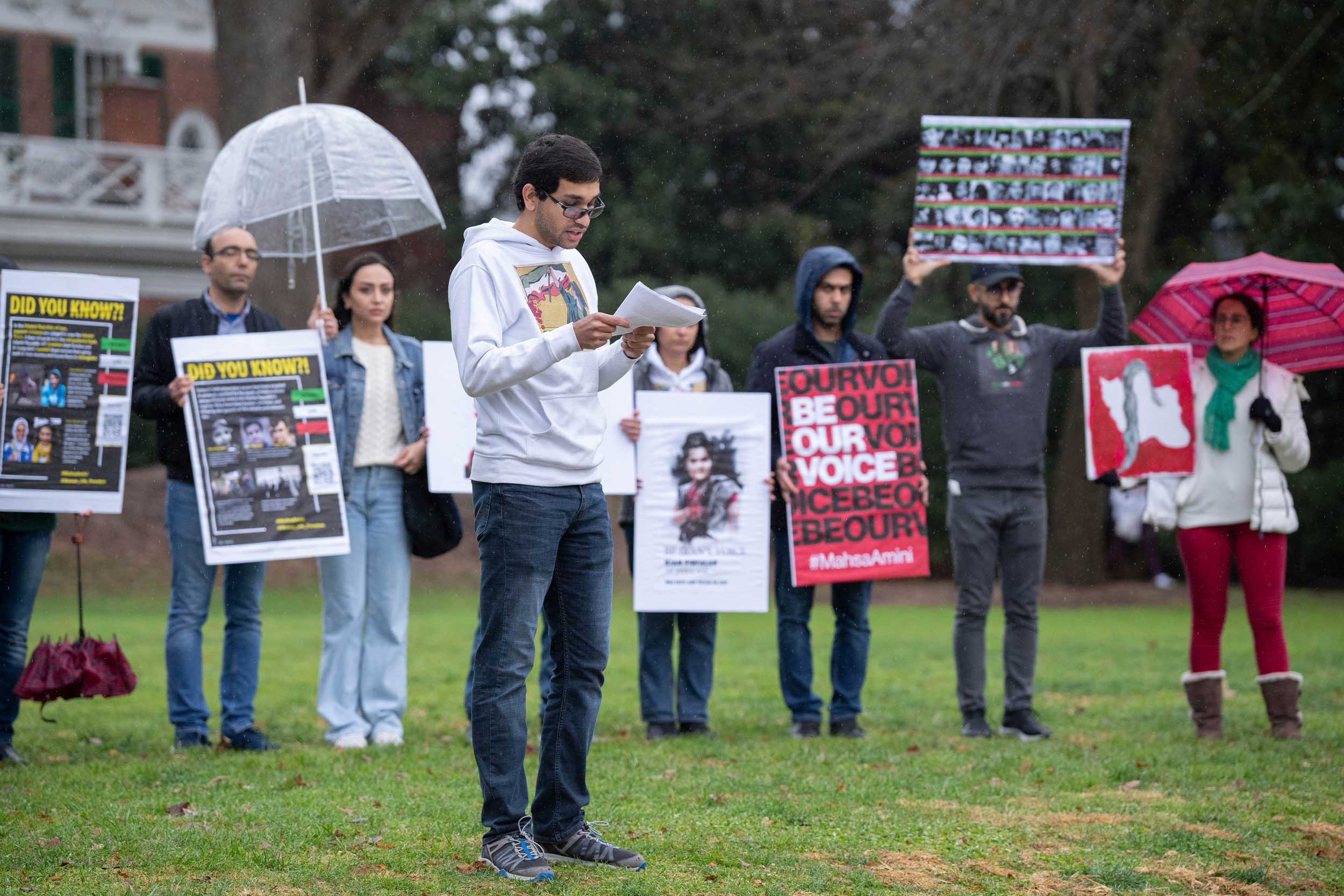 About three dozen students stood on the south end of the Lawn, holding signs and singing songs of protest in Farsi. Similar events took place on 135 college campuses across the globe, from Istanbul to Lisbon and Salt Lake City to Charlottesville.

“This isn’t the first time we’ve rallied at UVA. We’ve done this four or five times,” Shandi said. “But this is the first worldwide effort and we think that will make us heard more than we were before.”

The international protest and its UVA component are the latest in a series of events that began with the Sept. 16 death of Mahsa Amini, a 22-year-old Kurdish Iranian woman detained by Iran’s morality police for not wearing a proper hijab. She was arrested on Sept. 13, reportedly beaten by police, slipped into a coma and died three days later. 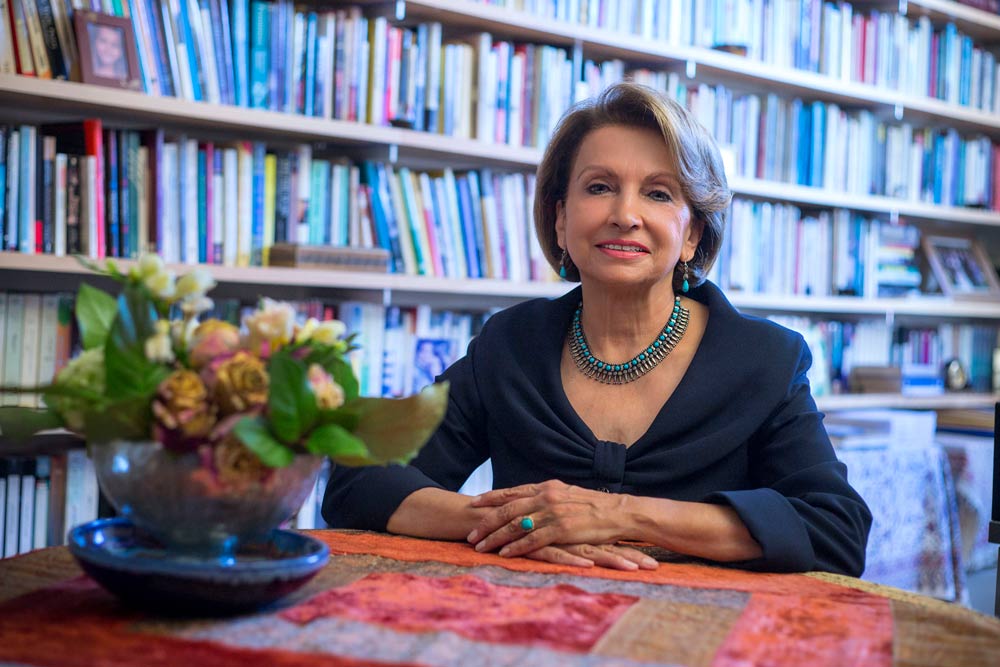 Farzaneh Milani, a UVA professor of Middle East and South Asian languages and cultures and a professor in the Department of Women, Gender &amp; Sexuality, said Iranian women have been at the forefront of the struggle for human and equal rights for more than a century. (Photo by Sanjay Suchak, UVA Communications)

Women doffed their headscarves at Amini’s funeral in protest, an act that was met with immediate violence from police. That sparked more protests across the country and on college campuses. Even grade-school girls have joined in.

That the demonstrations would be started and led by women should be no surprise for those familiar with Iran, said Farzaneh Milani, a UVA professor of Middle East and South Asian languages and cultures and a professor in the Department of Women, Gender & Sexuality.

“The awe-inspiring, women-led revolution we are witnessing in Iran has been long in the making,” said Milani, who is currently on sabbatical and could not attend the UVA protest. “As early as 1848, an Iranian woman, also a poet, named Tahereh Quorratol’Ayn unveiled herself publicly and caused a furor.” 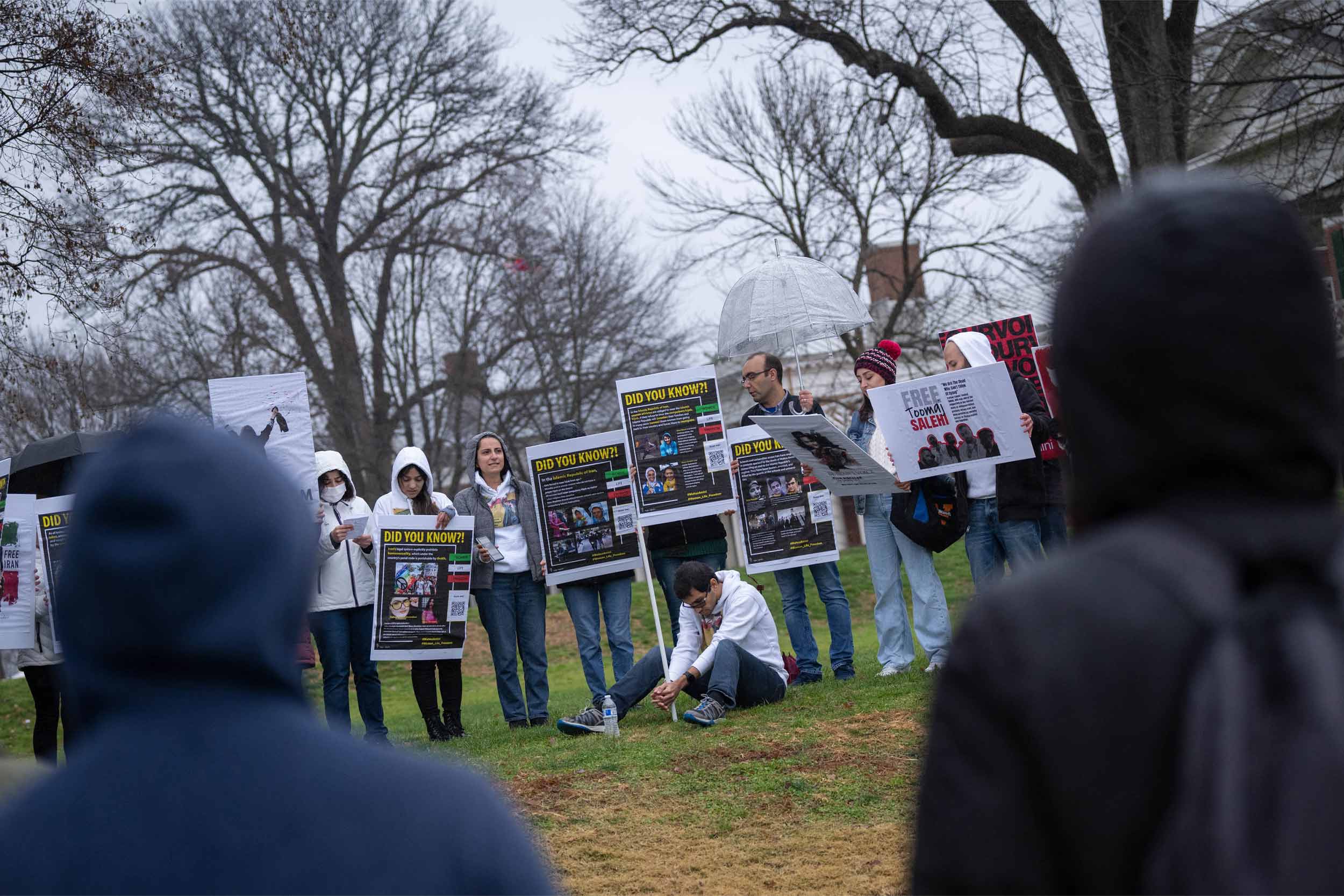 The poet’s move came a week before the first U.S. women’s rights convention in Seneca Falls, New York. Her actions, however, had dire consequences.

“Tahereh was declared a dangerous woman – a heretic, a harridan. She was strangled with her own headscarf and thrown into the deep of a well,” Milani said.

That did not stop the struggle.

“For more than 170 years, Iranian women have sacrificed life and limb for visibility, voice and mobility,” Milani said. “Women writers and poets were at the forefront of this desegregating movement, which shifted age-old hierarchies of power. It redefined masculinity and femininity in millions of homes and hearts and minds.”

Demonstrations in Iran have proved dangerous. The Iranian Scholars for Liberty, the international group that organized Wednesday’s worldwide protest, say police, paramilitary militia and the Islamic Revolutionary Guards have “raided campuses, dorms and high schools and have assaulted and arrested a vast number of students.”

This week, an Iranian general estimated more than 300 Iranians have been killed since the protests began. The UN Human Rights Office agrees with that total, noting that at least 40 of those deaths are children and that 12,000 people have been arrested.

That number is far lower than the 451 protesters and 60 security officers the U.S.-based Human Rights Activists in Iran has reported as killed. The organization estimates 18,000 have been detained.

“The imminent risk to students’ lives and safety in Iran is extremely dire [and] requires immediate action and attention from all who have the freedom of speech,” the international Iranian student organization wrote in a statement. 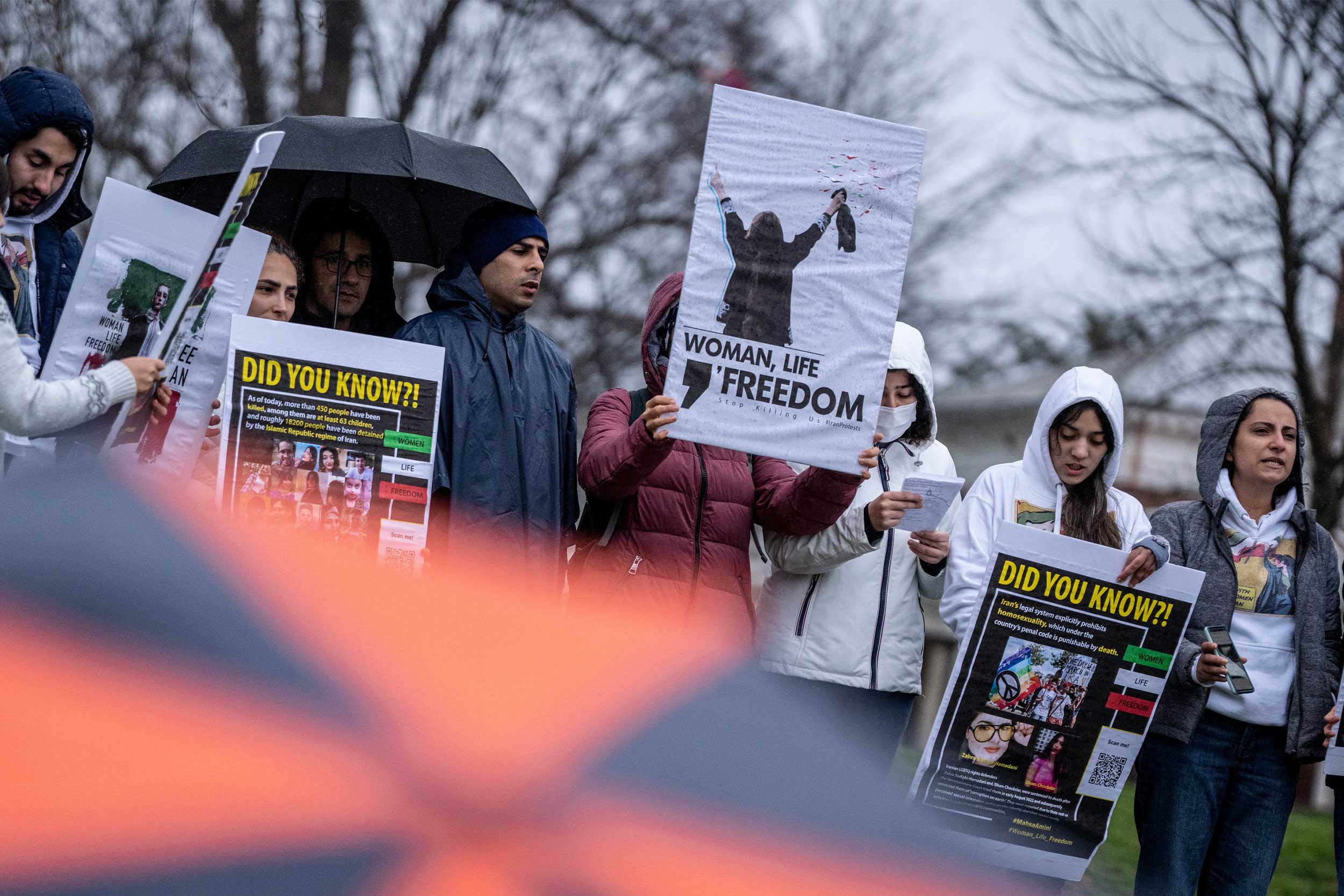 About three dozen students stood on the Lawn Wednesday as part of a worldwide protest of the Iranian government’s violent crackdown on pro-women’s rights demonstrations. (Photo by Sanjay Suchak, UVA Communications)

“It’s a lot more dangerous for people inside Iran to protest, of course, but it’s important for us to be here,” Shanti said on the Lawn. “Even though we are very far away and even though our families may not be in immediate danger, it is still our country. We are still concerned.”

Shanti said the restrictive laws on women need to be changed.

“Women have been the victims of this repression for many years,” he said. “We cannot stay quiet. We must take the risk and speak out.”

Milani said the movement toward women’s freedom in Iran will likely continue.

“No leader, no regime can stop this renaissance, this rebirth of an old and resilient culture,” she said. “In the prescient words of the iconic poet Forugh Farrokhzad, who was banned after the 1979 revolution: ‘This is not about fearful whispers in the dark. It is about light and open windows and fresh air. It is about everything useless burning in the fire. It is about a field pregnant with a new crop. It is about a rebirth.’”