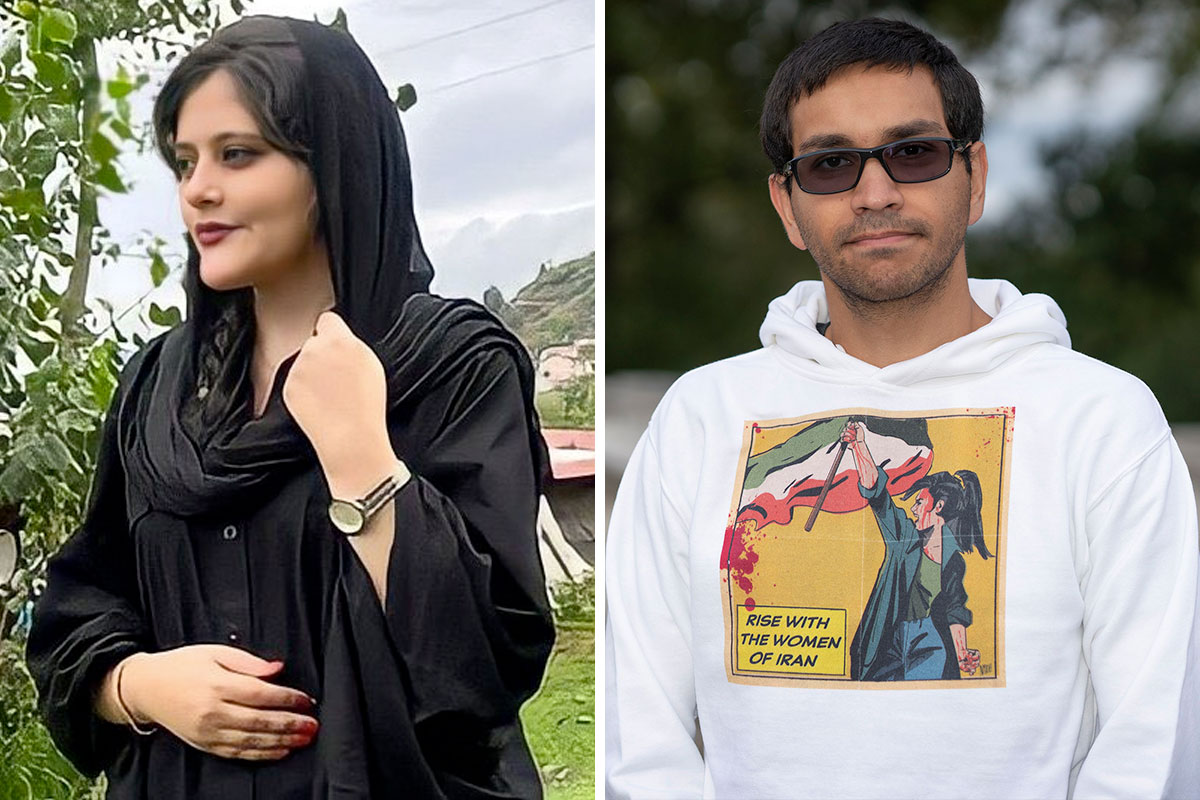 Iran has been in upheaval since Sept. 16, when Mahsa Amini died after being detained by the country’s so-called “morality police” for allegedly failing to cover her hair with a hijab.

Since then, thousands of women have been leading street protests, refusing to wear hijabs, defiantly cutting their hair and dancing in the streets, breaking the Islamic republic’s strict rules on morality.

The morality police, a special force tasked with enforcing the country’s strict Islamic law, pulled Amini off the streets of Tehran on Sept. 13 for her supposed hijab violation. More than 100 people have died since the protests began.

A female graduate student at the University of Virginia from Tehran agreed to speak with UVA Today, but only on the condition of anonymity – “because I don’t want my family in danger,” she said. 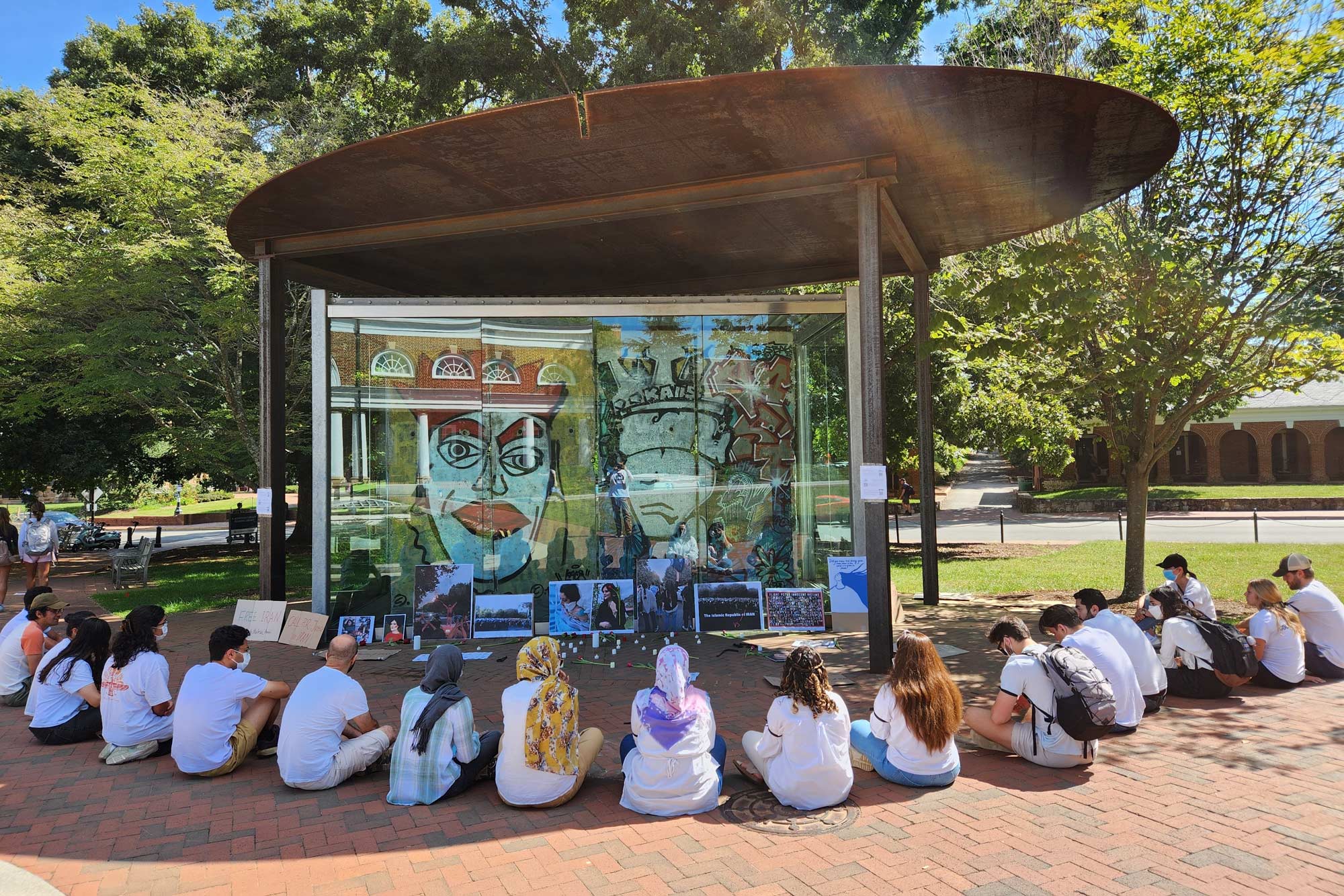 Iranian students recently gathered in solidarity in their call for human rights in Tehran. (Photo by Abtin Afshar)

About five years ago, her younger, high school-aged sister had a terrifying experience after being arrested by Iran’s morality police. The UVA student said she was required to provide her signature asserting that her sister would not engage in additional behavior that offended the morality police, who also told her to “bring some clothes for her that they considered a proper hijab.”

The student said the experience for her highlighted the lack of human rights in Iran, especially for women. “We don’t have simple rights,” she said.

When asked what the world can do, her response was simple and straightforward: “Just spreading the news,” she said.

Abtin Afshar is another Iranian graduate student and the leader of UVA’s Iranian Students Association. He echoed his classmate’s call to spread the word about the protests and the lack of human rights in his country, especially when it comes to women.

“The war in Iran is the front line of the war for human rights, women rights, LGBTQ+ rights and minority rights,” he said. “Our main slogan, ‘Women, Life, Freedom,’ is the most progressive slogan of any recent movement.

“We want to make awareness in our society regarding what is happening in Iran,” he continued. “We want everyone, especially women, to know that the people of Iran are fighting for humanity. We want everyone to help Iranians get their voices heard. We want politicians to stop negotiations and making deals with Iran. All these deals make the Islamic Republic stronger and enables them to suppress people more brutally. We are calling for global support at this point.” 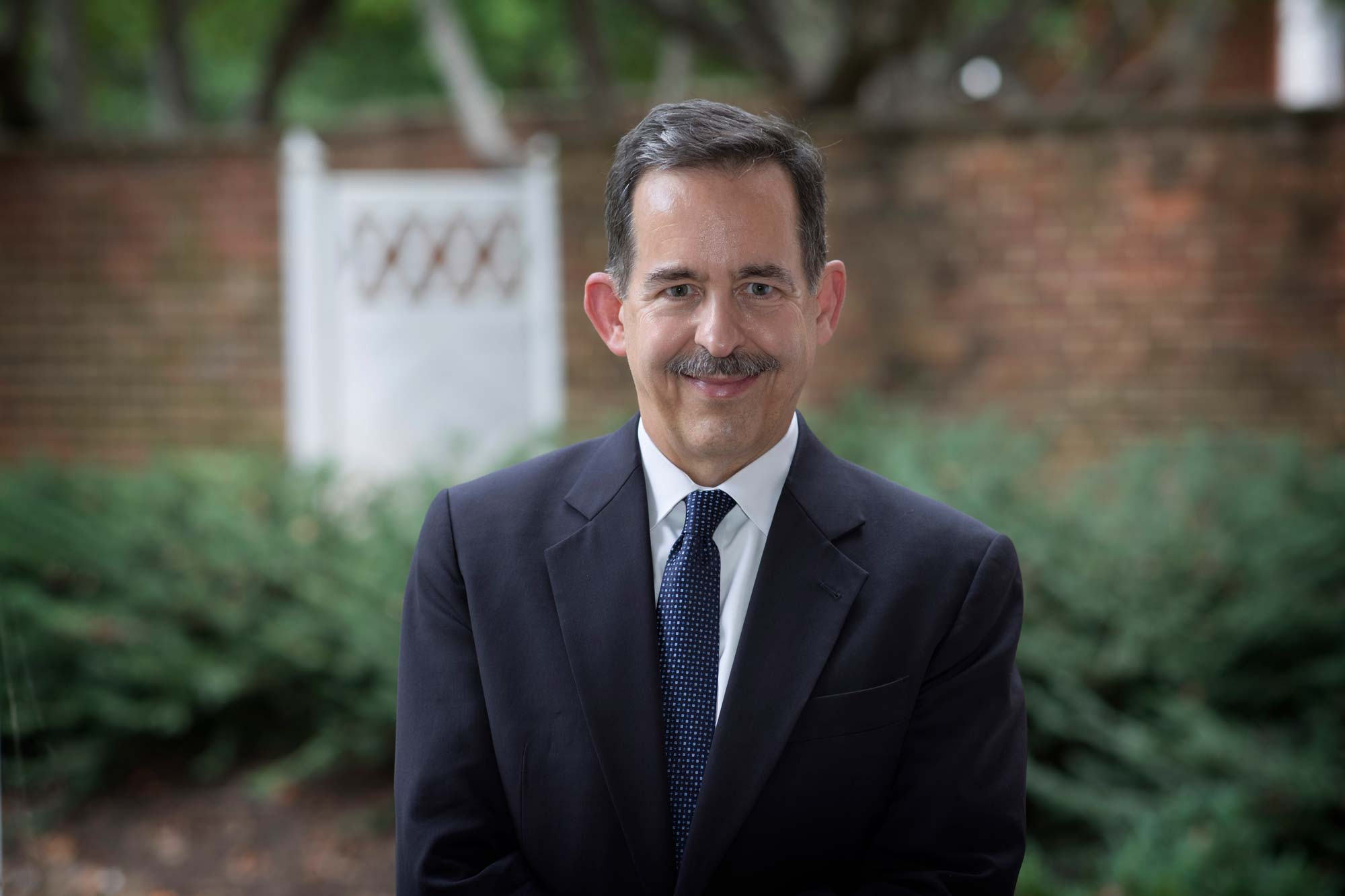 Stephen Mull, Iran expert and UVA’s vice provost for global affairs, said the death of Amini “was a particularly egregious example of overreach that sparked a critical mass of protest in more than 80 cities across the country.” (Photo by Dan Addison, University Communications)

Stephen Mull, UVA’s vice provost for global affairs, wrote to every Iranian student and employee at UVA on a student or work visa to express concern on behalf of UVA leadership and offer support. He said the University is ready to help its Iranian community through counseling or other support during the crisis.

“The rising violence and actions against women and protestors in Iran are gravely concerning,” UVA President Jim Ryan said. “As these events unfold, and as we learn of the stories of brave Iranian citizens expressing dissent, we are working to support members of UVA’s Iranian community.

“I am grateful to Steve Mull and others who are lending their expertise and assistance, as we all hope for an end to the Iranian government’s violence against people advocating for basic rights,” Ryan said.

“For many years, there has been steadily increasing resentment among Iranian women and their allies over the Islamic Republic’s frequently capricious and occasionally brutal treatment of women, including arrests of women on the street by morality police for what they consider immodest appearance,” Mull said.

He would know. The Iran expert led the United States’ implementation of the Iran nuclear deal from 2015 to 2017, and before that was President Obama’s senior adviser to the undersecretary for political affairs in managing U.S. diplomatic engagement with Iran.

He said the death of Amini “was a particularly egregious example of overreach that sparked a critical mass of protest in more than 80 cities across the country.”

Mull said the broader political context of the current protests is an important factor. “Current President Ebrahim Raisi, infamous for the execution of thousands of political opponents as a prosecutor in Tehran in the 1980s, won the presidency in 2021 with the strong support of Iran’s Supreme Leader Ayatollah Ali Khamenei in a tightly controlled election that featured the lowest turnout in the history of the Islamic Republic,” he said.

Since coming to power, Raisi “has moved to reverse some of the reformist tendencies of his predecessor Hassan Rouhani and adopted a more authoritarian style of government,” Mull said.

This has further empowered the morality police at home and the Iranian Revolutionary Guard overseas in its support of proxy forces across the region, from Yemen through Lebanon and Syria.

“Growing public dissatisfaction with Iran’s rapidly deteriorating economy, as a result of sweeping U.S. sanctions combined with mounting corruption, and increasing repression produces a fairly toxic mix that contributes to this much broader scale of protest,” Mull said. “Supreme Leader Khamenei’s recent hospitalization for a reportedly serious illness has increased the temperature even further, as the country’s security forces and advocates for greater liberalization become jittery and more aggressive over the prospect of a transition at the top.”

“The best case would be an immediate and peaceful end to the repression and a decision to hold the morality police accountable for Amini’s death, while signaling greater liberalization,” Mull said. “But I am not optimistic such an outcome is in the cards.”

The vice provost, who also served as the U.S. ambassador to Poland from 2012 to 2015, said “history is too full of examples of authoritarian regimes like Iran’s moving to become even more authoritarian when under threat, and there is nothing in Khamenei’s or Raisi’s background to suggest any interest in liberalization.”

He said the worst-case scenario “features even bloodier repression and, at least in the short term, strengthening of security forces in running Iran. But this, too, has substantial risks, as we saw in the 1970s when the shah’s steadily tightening repression in the end resulted in his violent overthrow in 1979.”

Challenges to the United States

Mull said the U.S. government faces a “significant challenge” in addressing the crisis.

Khamenei regularly blames the United States and Israel for protests in the country and did so again earlier this month, saying, “These riots and insecurities have been engineered by the U.S. and the fake Zionist regime while those on their payrolls and some expatriate Iranian traitors helped them.”

Mull said, “While the Biden administration and Americans in general strongly support the efforts of Iranians to liberalize and democratize their society, there is also a risk in feeding the Iranian government’s propaganda that the U.S. and other Western powers are behind the protests.”

“That risk led the Obama administration to adopt a much more cautious line in response to the last great wave of protests in Iran in 2009,” he pointed out. “This time, the Biden administration has not been afraid to take a more pronounced stand in support of Iranian democrats, including by loosening sanctions to allow American tech companies to provide internet connectivity to the Iranian protestors.” 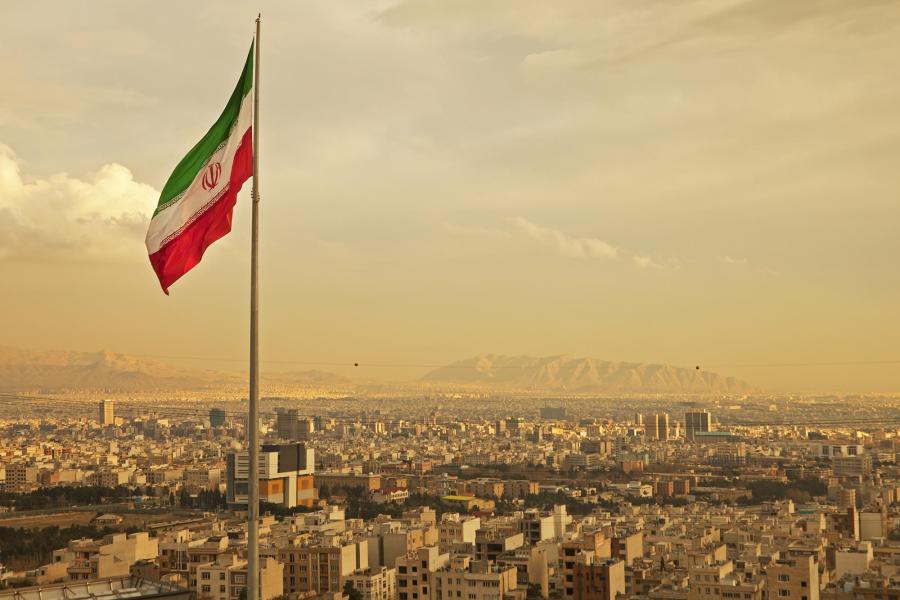 Expert on US-Iran Nuclear Talks: ‘One of the Riskiest Tightropes in Diplomacy Today’ 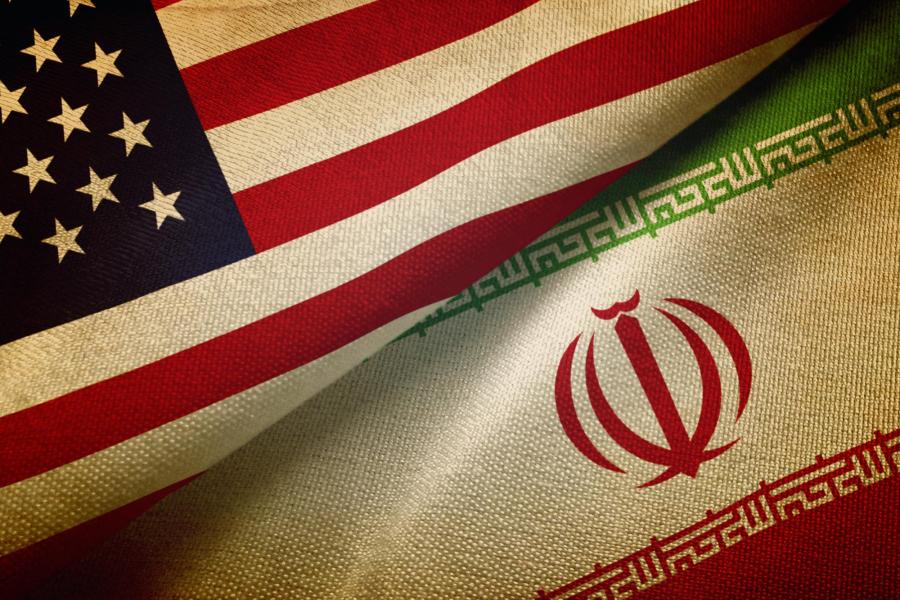 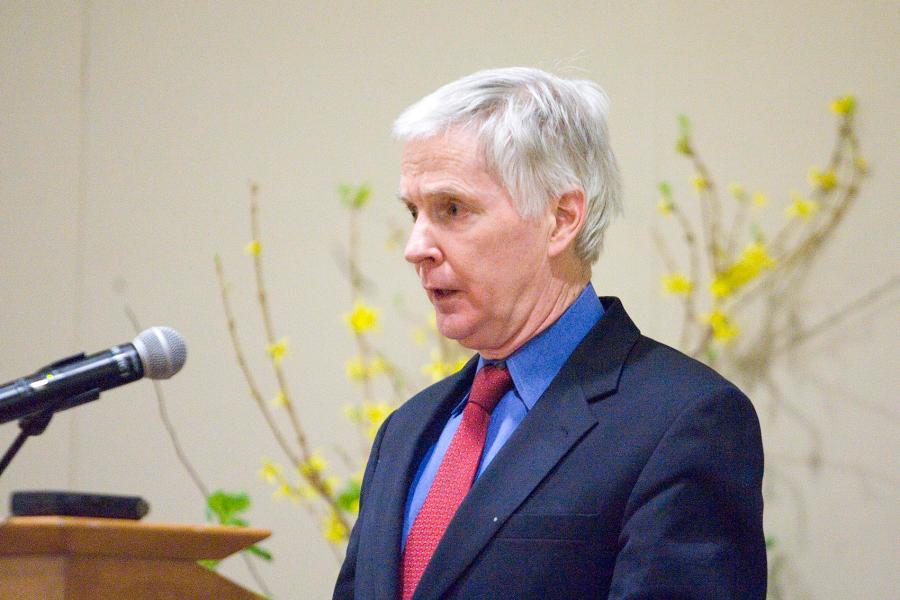