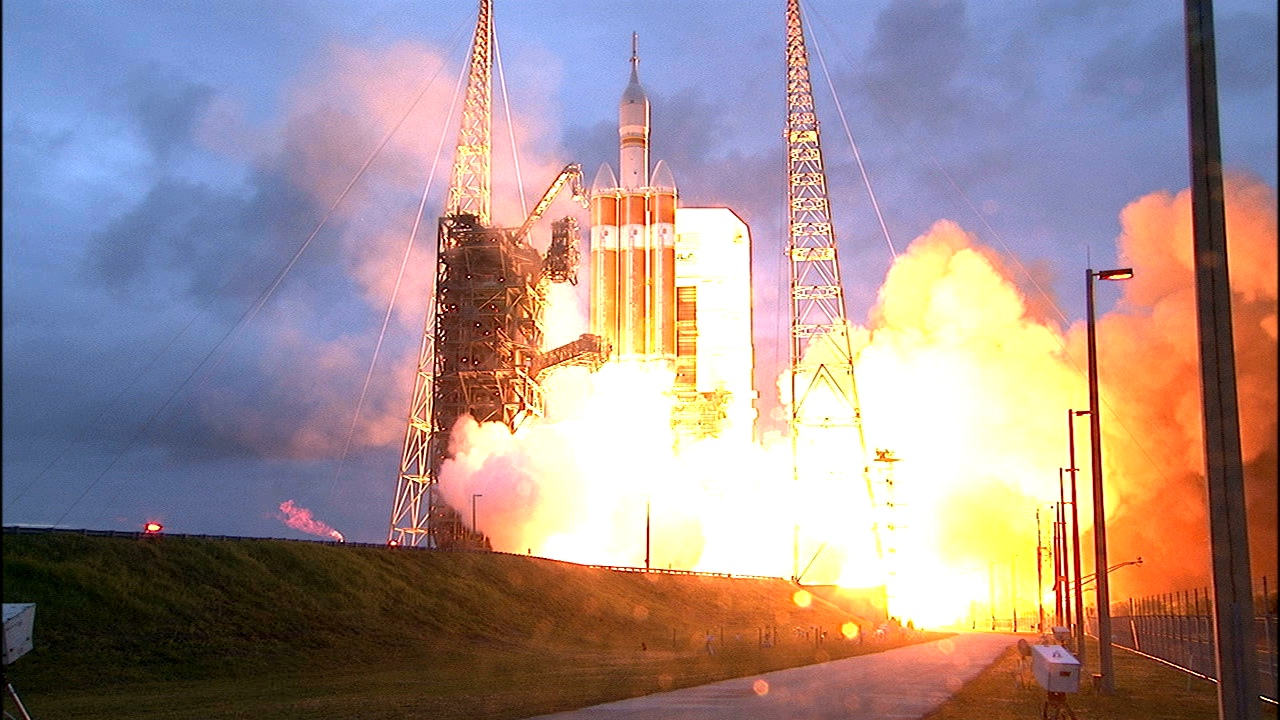 University of Virginia first-year students Danny McNamara and Sajan Sheth are at the Kennedy Space Center in Florida, where they observed this morning’s launch of NASA’s Orion spacecraft, which the agency plans to eventually use to carry astronauts to Mars.

They are there for good reason.

Sheth and McNamara are part of a team of young engineers who designed and built a radiation shield for the spacecraft. As students at the Governor’s School for Science and Technology in Hampton, the U.Va. duo and their collaborators – called Team ARES – won a NASA-sponsored competition, the Orion Exploration Design Challenge, to build the component. They competed against high school teams from across the country, and their work was evaluated by NASA, Lockheed Martin and the National Institute of Aerospace.

“This whole experience has been incredible. … I mean, something we created actually gets to fly into space!” Sheth said from Cape Canaveral.

The Orion Exploration Design Challenge was developed to engage students interested in science, technology, engineering and math by inviting them to help tackle one of the most significant dangers of human space flight: radiation exposure.

During its brief space flight, Orion is traveling through the Van Allen Belt, a dense radiation field that surrounds the Earth in a protective shell of electrically charged ions. Understanding and mitigating radiation exposure during Orion’s flight test can help scientists develop protective solutions before the first crewed mission. Following the flight, the students will receive data indicating how well their design protected a dosimeter, an instrument used for measuring radiation exposure.

The shield is one of the most important components to be tested during the flight, as future shields on Orion missions will protect astronauts from radiation.

“Our experiment is a cube-like shape comprised of different metal layers and a polyethylene core,” McNamara said. “Several radiation-sensing devices, dosimeters, were placed in the component in order to give information as to how well the design protects against radiation during the flight.”

The idea to put together a Governor’s School team to enter the Orion Exploration Design Challenge came from Gregory Hajos, a retired NASA scientist who is a volunteer mentor at the school. NASA’s specifications were quite specific, calling for a shield that would fit into a seven-inch cube, but Team ARES came up with a slightly smaller product to meet the weight requirement.

“We brainstormed and came up with this shield, which fits all of their requirements,” Hajos said. “Its structure can stand up to a large amount of radiation.”

On a Facebook posting in April, McNamara, Sheth and the other Team ARES members, who now are all attending different colleges, stated:

“We all considered ourselves to be pretty smart high school students, yet we learned first-hand that designing and building spacecraft components is hard. Really, really hard! That’s why we’re extremely surprised and excited to be the winners of NASA’s Exploration Design Challenge.”

McNamara is an engineering student, and Sheth is a student in the College of Arts & Sciences.

What Is the ‘4th Side’? END_OF_DOCUMENT_TOKEN_TO_BE_REPLACED