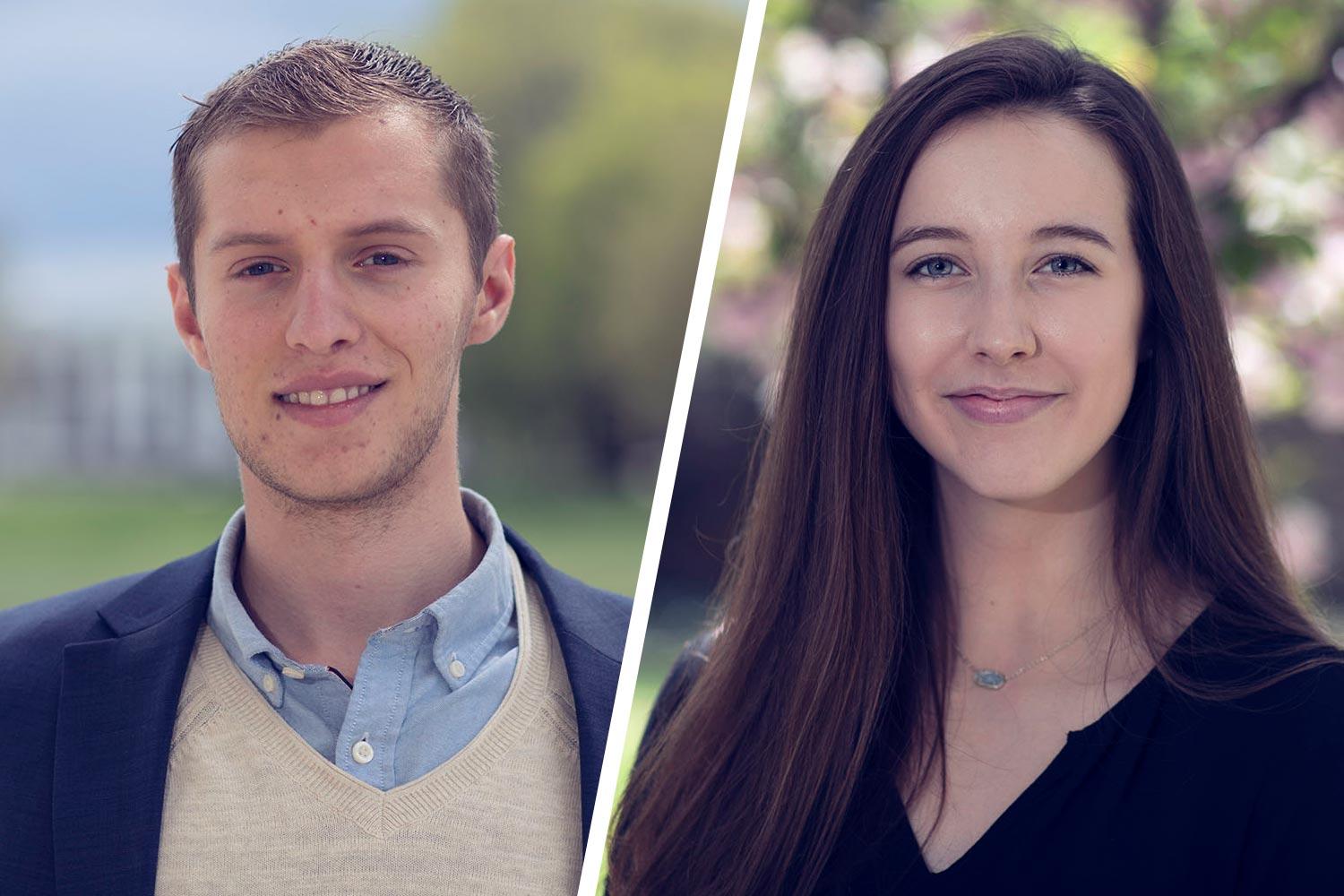 Joshua Zabin of Ashburn and Geneva, a second-year Chinese language and literature and history distinguished major, will study Persian Farsi at the University of Dushanbe in Tajikistan next spring and summer. Katherine Gasser of Vienna, a first-year Russian and East European studies major, will study for a year at the Jagiellonian University of Krakow, Poland.

Boren Scholarships, an initiative of the National Security Education Program, provide unique funding opportunities for U.S. undergraduate students to study less-commonly taught languages in world regions that are critical to U.S. interests, but underrepresented in study abroad, including Africa, Asia, Central and Eastern Europe, Eurasia, Latin America and the Middle East. The program provides up to $20,000 for a one-year program and recipients commit to one year of federal government service.

Zabin hopes to follow his father’s career path into the foreign service.

“As a foreign service officer, your job is to advance American interests, but you can’t do that without the relevant language skills and a nuanced understanding of a country’s history and culture,” he said.

Zabin has been focusing his undergraduate research on Iranian public policy and Iranians’ perceptions of America, working with a Ph.D. candidate and a few other undergrads. He will be studying Persian Farsi in the Central Asian nation of Tajikistan because Iran is currently not a suitable place for Americans to study.

“Hopefully that reality will change soon,” he said. “For now, American views of Iran remain overly colored by the Islamic Revolution, even though our two countries actually could share a number of mutual interests.

“In Tajikistan, I’ll live with a host family and receive four hours of daily language instruction, and will also get to experience the Persian New Year, Nowruz. I hope my language skills can eventually make a small contribution toward the normalization of U.S.-Iranian relations.”

Hsin-hsin Liang, associate professor of Chinese and director of the UVA-in-Shanghai Chinese language program, has taught Zabin for two semesters of fourth-year Chinese.

“His work ethic and intrinsic motivation have impressed me,” Liang said. “He seeks to go beyond the requirements of the course; his essays demonstrate that he is a broad thinker with an equally broad knowledge set.”

Liang added that Zabin’s international background should serve him well in his future endeavors.

“Josh has a clear professional path,” Liang said, adding that Zabin hopes to become a diplomat in order to “bridge Americans and the rest of the world. He has also studied advanced Indonesian with the prestigious Critical Language Scholarship and is most deserving of this very competitive and prestigious Boren Scholarship.”

Mahshad Mohit, a lecturer in the Department of Middle Eastern and South Asian Languages and Cultures, compared Zabin’s work with language to a mountain climber inexorably ascending to the summit.

“For Josh, language learning is an endeavor and a labor of love,” Mohit said. “Josh is unassuming, but kind and curious. He lives in the International Residential College, and many of his friends are students from diverse backgrounds. He certainly enjoys learning about different people and cultures.”

Zabin, a photographer for the Cavalier Daily student newspaper, has been a member of the UVA Model United Nations team. He studied Indonesian in Malang, East Java, on a Critical Language Scholarship. He has interned at the U.S. Embassy in Jakarta, working on the embassy’s commercial ties with Indonesian companies, and will intern this summer at the U.S. Mission to the United Nations in Geneva, Switzerland. A graduate of the Jakarta Intercultural School, he hopes to join the Marines or State Department. He was also a volunteer on Hillary Clinton’s presidential campaign and Ralph Northam’s campaign for Virginia governor.

Gasser became interested in Eastern Europe when an older sister was studying Polish. In the summer of 2016, she and her sister spent six weeks studying the language at the Catholic University of Lublin.

“While I was there, I began to appreciate the culture and history more than I initially imagined I would, and my studies became a serious interest,” she said. “After that summer, I decided I would study the languages, history and politics of the region as my main focus in college. I began to study Russian at UVA because Russia, as a political and cultural presence, has had a significant impact on the rest of the region and the world.”

While Gasser is not yet committing herself, she said careers in the military or in diplomacy are possible.

“Receiving this scholarship will allow me to study abroad in Poland for a full academic year,” she said. “Receiving this award means I can continue studying Polish at a more advanced level. The scholarship offers a professional network to its recipients and access to a variety of career opportunities.”

Gasser is currently taking second-year Polish with Dariusz Tołczyk, professor in the Department of Slavic Languages and Literatures.

“She is a model student – very motivated, hard-working and dependable,” Tołczyk said. “She definitely has a special talent for languages. In addition to Polish, she is also taking first-year Russian. With all the illusive similarities and treacherous differences between these two languages, it is not easy at all to learn both at the same time and not get them confused. And I have to add that she is also advanced in Spanish.”

Tołczyk said Gasser is very well-suited for the career she is considering in national security with a view toward American relations with Poland and Eastern Europe.

“Kate is not only an excellent student, but a truly delightful person, a real joy to work with,” he said. “She is friendly, personable, likable, engaging, well-mannered, empathetic and she has a great sense of humor.”

Anna Borovskaya-Ellis, an assistant professor in the Department of Slavic Languages and Literatures, described Gasser as an inquisitive student with an acute mind and phenomenal memory.

“Katherine is one of the most motivated and diligent students in my Russian 1010 and 1020 courses,” Borovskaya-Ellis said. “She is a bright, able person with a lot of energy and enthusiasm for her studies. Katherine’s dedication and hard work, as well as her genuine interest in Slavic languages and cultures, makes her stand out against the rest of her classmates.”

A graduate of the Oakcrest School, Gasser is a member of the Burke Society, a conservative philosophical and debating society, and the Slavic Student Association.

The Boren Scholarships were created by former U.S. Sen. David L Boren, currently the president of the University of Oklahoma.