U.Va. Study: One in Nine Virginians is Foreign-Born 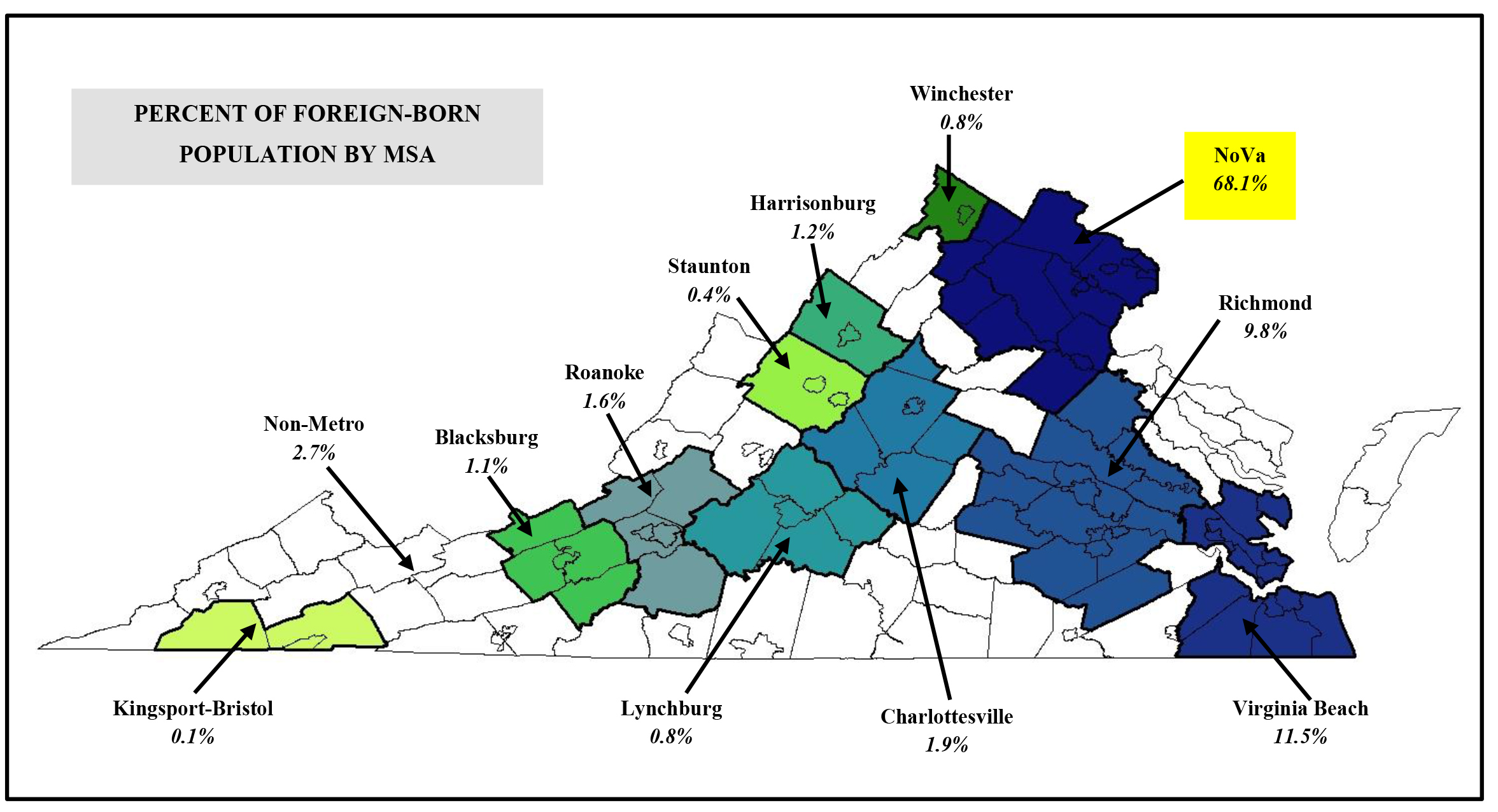 One in nine Virginians was born outside of the United States, while 40 years ago that was true of only one in 100 Virginians, according to University of Virginia researchers in the Weldon Cooper Center for Public Service’s Demographics Research Group. Foreign-born Virginians make up 15 percent of the state’s workforce.

This finding and others related to immigrants in Virginia are detailed in a Census Brief released today, the third in a series of short publications depicting trends in census and other data of interest to the commonwealth.

The top five countries of birth for immigrants to Virginia are, in order, El Salvador, India, Mexico, the Philippines and South Korea.

While only a little over 3 percent of the foreign-born reside in the Charlottesville and Harrisonburg MSAs, they make up 9 percent of the local population, largely due to the strong presence of international students, faculty and staff in the universities, as well as refugees and migrant workers.

“Foreign-born Virginians and their children contribute to diversity in Virginia,” Qian Cai, director of the Demographics Research Group, said. “Culture, customs, languages and cuisines from other countries are increasingly a part of the template of life in the commonwealth.”

In addition to their diverse backgrounds, the foreign-born population has a much larger proportion of working-age adults who participate in the labor force: 73 percent, in comparison to 65 percent of native-born working adults.

“The relatively younger population of foreign-born people in Virginia is perfectly positioned for two activities: production (in the labor force) and reproduction,” said researcher Shonel Sen, who prepared the brief. “It is also interesting to note that almost one-fifth of native-born children under the age of 18 in Virginia have at least one foreign-born parent.”

Monkeypox Is Spreading, But University’s Risk Believed To Be Low END_OF_DOCUMENT_TOKEN_TO_BE_REPLACED

Q&A: Assessing the Risks and Rewards of Pelosi’s Plan to Visit Taiwan END_OF_DOCUMENT_TOKEN_TO_BE_REPLACED

These Giant Wind Turbines, Inspired by Palm Trees, May Be the Future of Renewable Energy END_OF_DOCUMENT_TOKEN_TO_BE_REPLACED