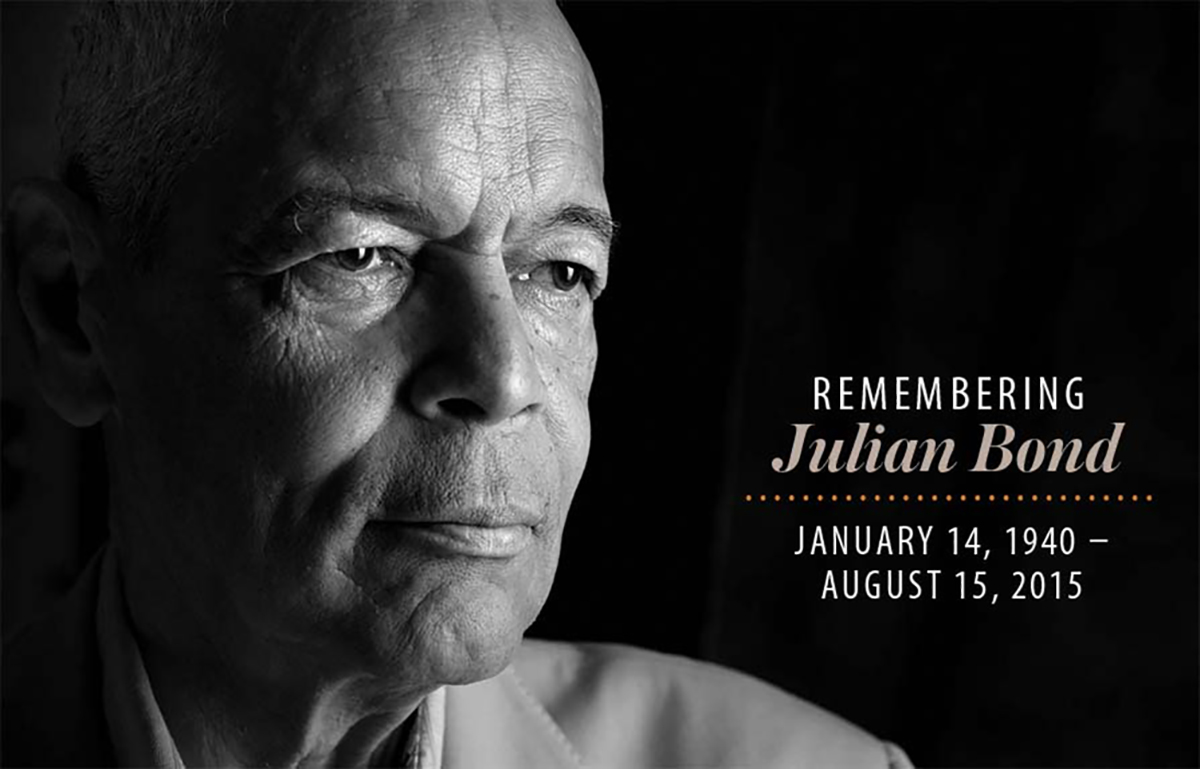 A University of Virginia symposium organized in remembrance of the late Julian Bond – one of the most prominent social justice advocates to emerge from the American Civil Rights Movement and a UVA professor emeritus of history – will be held next week. Scheduled for Oct. 20 and 21, the “Keep the Movement Coming On” symposium will feature a series of panel discussions exploring the history of the Civil Rights Movement as well as its contemporary and global impact.

“In organizing this event, we were guided first and foremost by the ‘road map’ that Julian Bond left us through the words he wrote, the speeches he delivered, and the stances he took – in public and private – against myriad and intractable forms of injustice,” said Deborah McDowell, director of UVA’s Carter G. Woodson Institute for African-American and African Studies and chair of the symposium’s organizing committee.

Panelists will include documentary filmmakers, former NAACP president and CEO Benjamin Jealous and officials from the Student Nonviolent Coordinating Committee that Bond helped to found in the early 1960s, as well as historians and scholars from the University of California at Berkeley, Princeton University, Duke University and other universities. Historian Taylor Branch, author of the award-winning “America in the King Years” trilogy, is scheduled to appear for the closing panel discussion, titled “From ‘Freedom Now’ to Black Lives Matters: Legacies of the Civil Rights Movement in Contemporary Social Protest.”

Bond died in 2015 at the age of 75. His wife, Pamela Horowitz, is scheduled to attend the symposium.

“While some panelists will consider the arc and touchstones of Bond’s impressive 50-year career, others will provide a critical overview of the Civil Rights Movement, assessing its achievements, measuring its failures and formulating new strategies for continuing the never-ending struggle for freedom, justice, and social change, including in the classroom,” McDowell said.

Free and open to the public (though online registration is recommended), the panel discussions will be held in the auditorium of the Harrison Institute/Small Special Collections Library. The series of events scheduled for Oct. 20 concludes with a musical performance at the Paramount Theater, titled “Written in the Key of Justice, ” featuring John D’earth, director of the Department of Music’s Jazz Performance program, and members of the original SNCC Freedom Singers (8 to 9:30 p.m.)

During his time on Grounds, Bond also co-directed the University’s “Explorations in Black Leadership” oral history project and continued to contribute to University initiatives after his teaching tenure concluded. In 2014, he led his ninth Civil Rights South Seminar, a popular tour that took participants to Atlanta; Birmingham and Selma, Alabama; and other landmark sites from the Civil Rights Movement.

In the early 1960s, he emerged on the national scene as one of the leaders of a series of anti-segregation protests against public facilities in Georgia. The first president of the Southern Poverty Law Center, Bond chaired the National Association for the Advancement of Colored People from 1988 until 2009. He narrated the critically acclaimed PBS documentary series, “Eyes on the Prize,” and hosted the television show, “America’s Black Forum.” He also served for 20 years in the Georgia legislature, in both the state House of Representatives and the Senate, beginning in 1965.

The recipient of numerous honors and awards, Bond received the Library of Congress Living Legend Award in 2008.

The symposium’s theme, “Keep the Movement Coming On,” is excerpted from “Faces at the Bottom of the Well,” a speech Bond delivered at the Massachusetts Institute of Technology in February 2003, in celebration of the life of the Rev. Dr. Martin Luther King Jr. In that speech, Bond chose to focus his remarks on an aspect of King’s legacy often lost in popular discourse: his consistent efforts to foreground economics and his advocacy on behalf of workers and the poor.

Following Bond’s death, UVA President Teresa A. Sullivan praised him for shaping the course of history through his life and work.

“He made significant contributions to the University of Virginia, teaching thousands of our students while serving as a mentor and role model for all of us,” Sullivan said in 2015. “Martin Luther King Jr. told us, ‘The arc of the moral universe is long, but it bends toward justice.’ Julian Bond devoted his life to bending our world toward justice, and all of us should be grateful.”

For information and a complete schedule of events, visit the symposium website.

A Year We Will Never Forget: 2019-20 in Review END_OF_DOCUMENT_TOKEN_TO_BE_REPLACED

‘What Will You Carry With You?’ Remarks From UVA President Jim Ryan END_OF_DOCUMENT_TOKEN_TO_BE_REPLACED