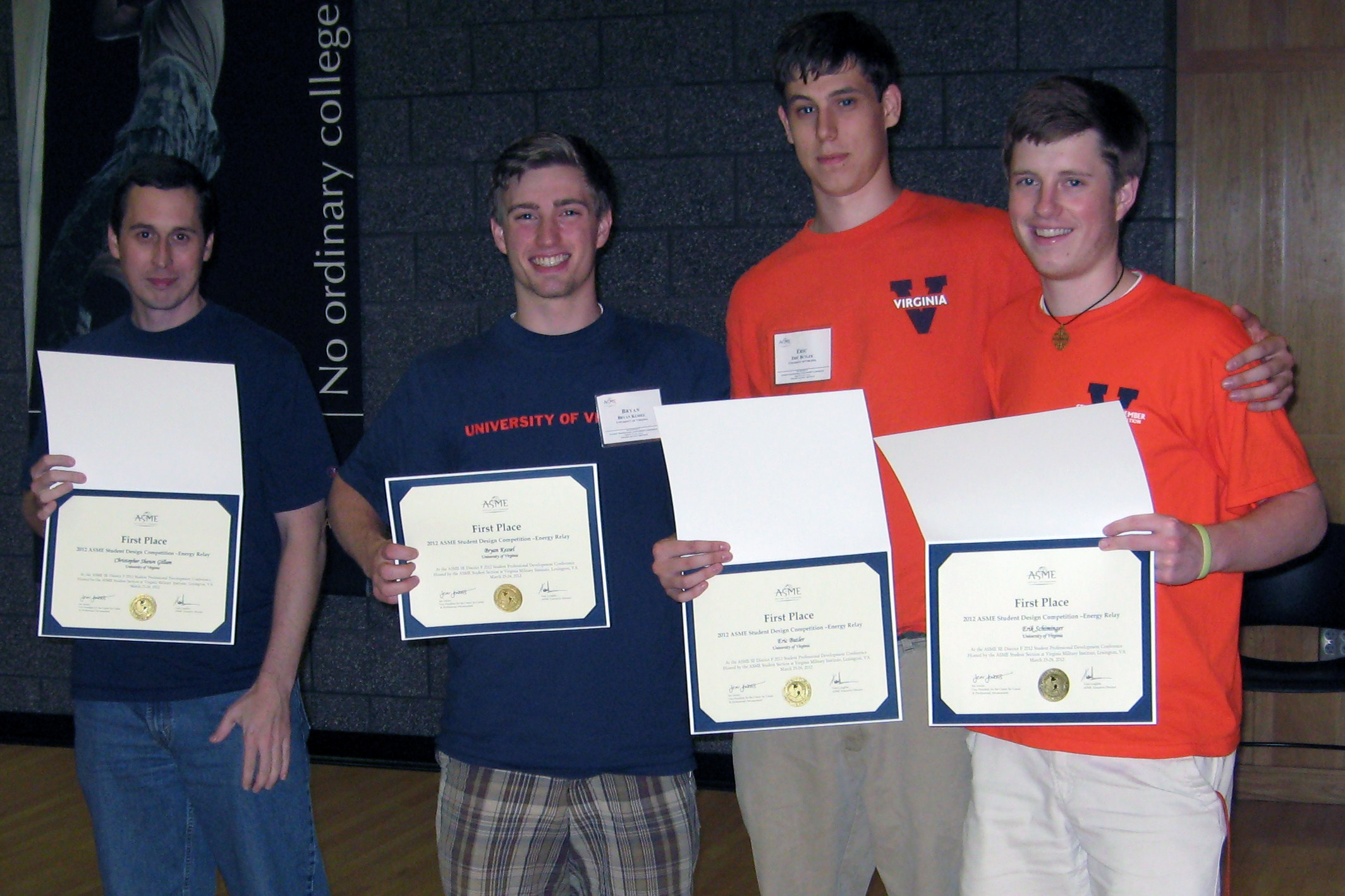 Gavin T. Garner, assistant professor of mechanical and aerospace engineering in the School of Engineering and Applied Science, is the adviser for both teams. He said that U.Va.'s showing in the competition has steadily improved over three years.

"When U.Va. first started participating in these competitions three years ago, they placed third in this regional competition out of about a dozen other teams. Last year, they placed second, and defeated Virginia Tech," he said. "This year they placed first. Not only that, they were able to field an additional team that placed second. I'm very proud of their performance."

The centerpiece of the event is a design competition. This year's involved developing a relay team of four small, autonomous cars propelled by different energy sources. The U.Va. teams used energy sources such as fuel cells, supercapacitors, batteries, springs and compressed air.

The first-place "Cap Busters" design team is made up of fourth-year mechanical and aerospace engineering students Eric Butler, Bryan Kessel and Erik Schiminger and third-year student Shawn Gillum. They will advance to the national finals, which will be held in November during ASME's annual International Mechanical Engineering Congress & Exposition in Houston.

Also during the ASME regional conference, Alex Russomanno, a fourth-year student majoring in mechanical engineering, won gold medals for best oral presentation and best technical content for his lecture on micro-actuators, which he has been researching with Carl Knospe, associate professor of mechanical and aerospace engineering. Russomanno will advance to the finals during the event in Houston.

Garner said U.Va. will host next spring's regional student conference. "It'll be a great opportunity for the U.Va. community to come out and support our students as they create imaginative and cleverly-designed solutions to difficult design challenges," he said.

Do You Know the History of Your Favorite Corner Spots? END_OF_DOCUMENT_TOKEN_TO_BE_REPLACED

Netflix to Add Ads. Why This Could Be a ‘Game-Changer’ for Your Viewing Experience END_OF_DOCUMENT_TOKEN_TO_BE_REPLACED

What’s Next for UVA’s Class of 2022? END_OF_DOCUMENT_TOKEN_TO_BE_REPLACED