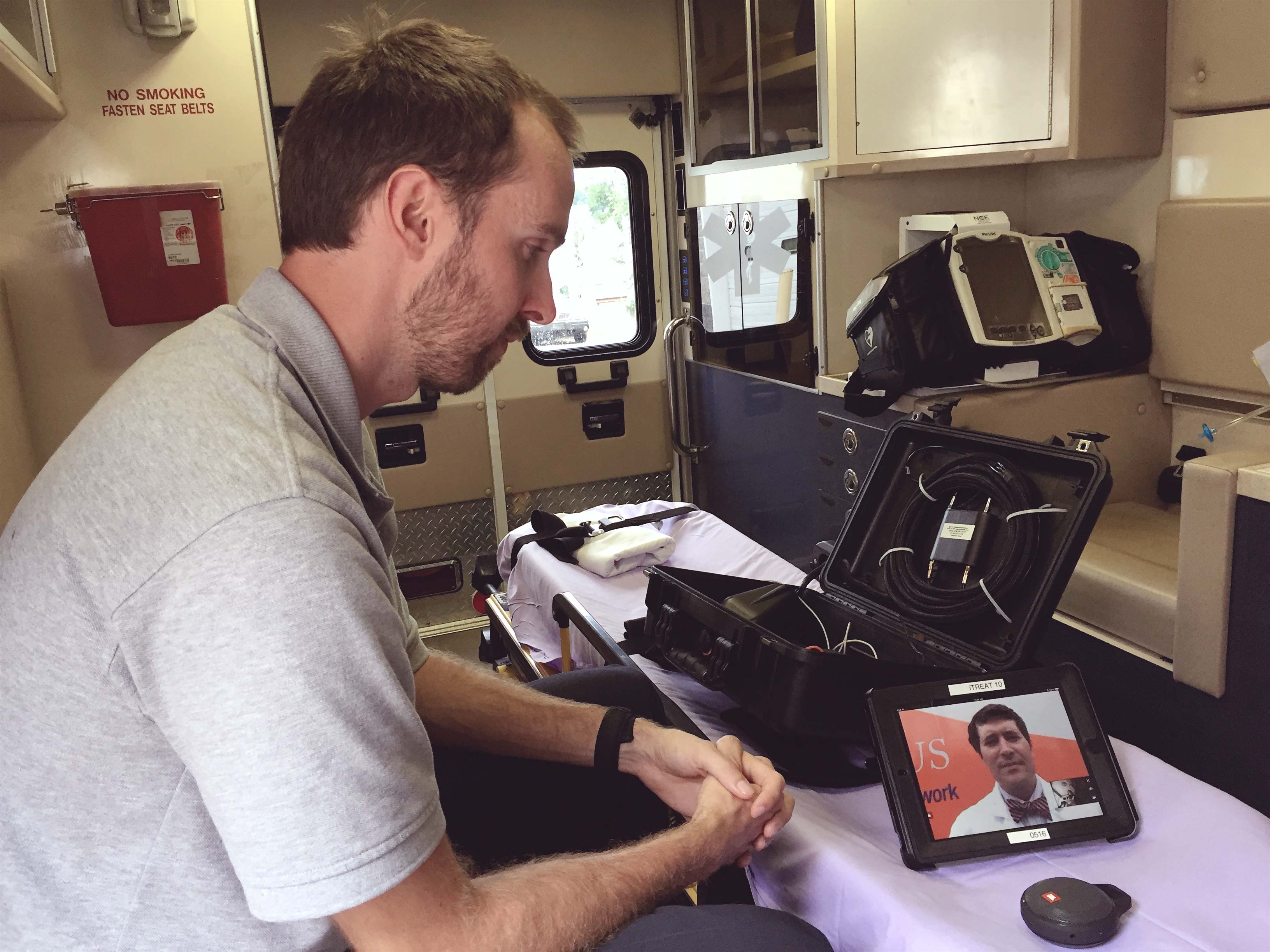 A clinical trial testing mobile videoconferencing as a means for physicians to diagnose stroke patients while they’re being transported to the hospital has found that a tablet-based system produced diagnoses highly correlating with a bedside assessment – a finding that could have important implications for the early treatment of stroke and for preventing the disabilities it causes.

The University of Virginia study, called Improving Treatment with Rapid Evaluation of Acute Stroke via Mobile Telemedicine, or iTREAT, used a low-cost, tablet-based system that allows physicians to be in the ambulance – virtually – with patients who are being transported. The iTREAT kit contains a tablet suction-mounted to the wall of an ambulance, a portable modem and antenna, which allow an encrypted form of video consultation between a neurologist, a stroke patient and an emergency medical services provider.

“In our initial feasibility testing, we partnered with rural ambulance agencies to allow enough time for the stroke assessment and tested our mobile telestroke system in simulated stroke scenarios,” said Dr. Andrew Southerland, head of the UVA Health System team that conducted the study. 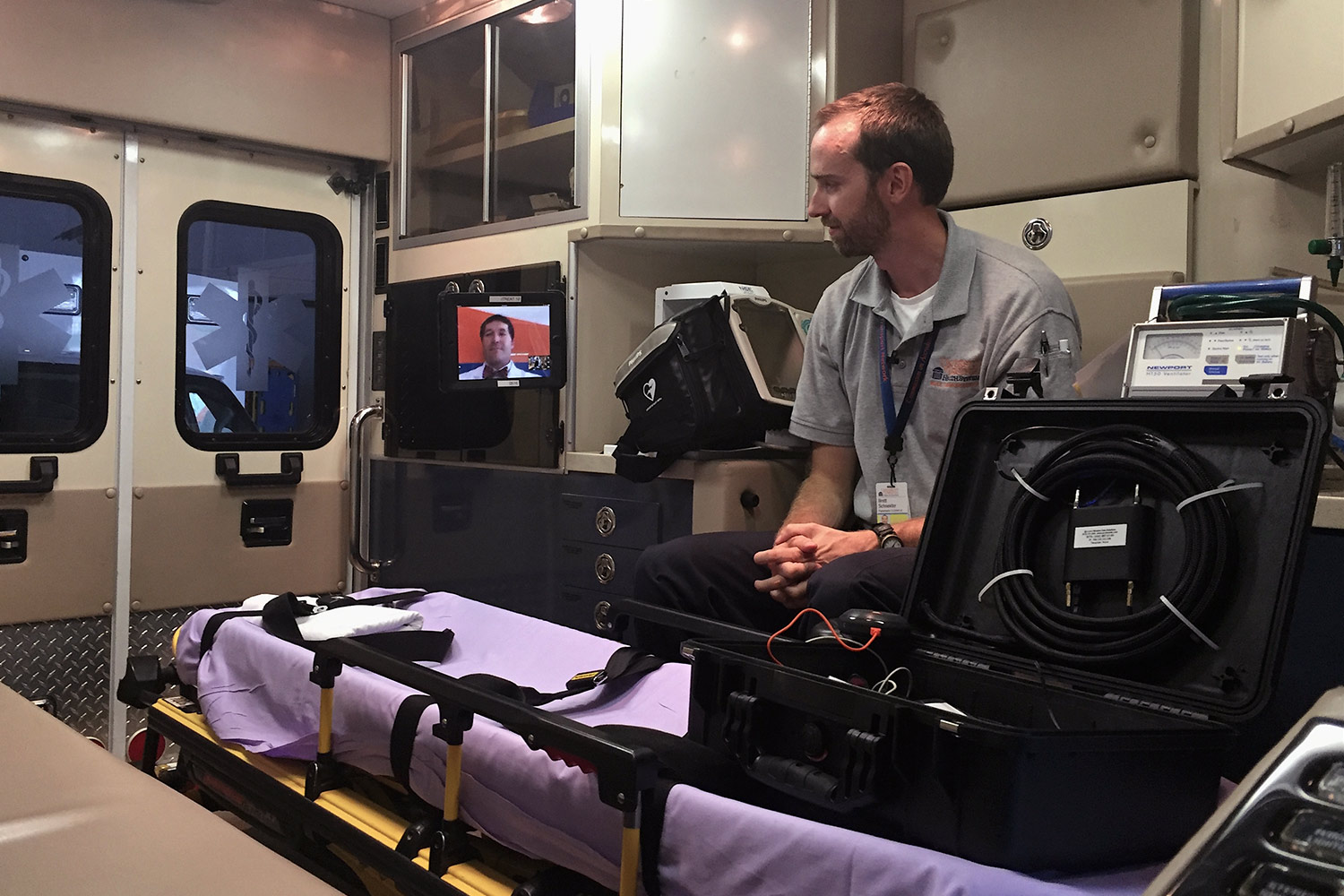 The study found that more than 90 percent of the test runs conducted locally had sufficient quality and audiovisual connectivity to perform the consultation. The researchers determined that stroke-testing results were 98 percent correlated with assessments that would have been done at the bedside. In other words, iTREAT was just as accurate as a bedside assessment by a neurologist, which would allow for better transport decisions by the EMS team and potentially faster treatment of the patient once at the hospital.

The standard neurological screening exam in a stroke evaluation is the National Institutes of Health’s Stroke Scale, performed by neurologists and emergency medicine physicians. The ability to have a neurologist assess the patient extensively during the trip to the hospital could help save time in assessing the patient once at the hospital and would inform important transport decisions such as whether the patient should be brought to a tertiary center for specialized care or simply taken to the nearest hospital.

“Acute stroke is a very time-dependent illness,” Southerland said. “Specifically, in acute ischemic stroke, if you can remove the vascular obstruction and re-vascularize the injured part of the brain in a timely way, you can potentially prevent disability and death.”

The treatment for ischemic stroke, the most common type of stroke, is administering a clot-busting medication and/or performing an endovascular procedure that can resolve the obstruction in the artery that is preventing blood flow to the brain. But these treatments must be administered as quickly as possible, within a few hours after the onset of the stroke. Many stroke patients do not arrive at the hospital quickly enough to receive beneficial treatment, so the ability to earlier identify a stroke is crucial for better treating stroke patients.

“The goal of our study is to advance the assessment of acute stroke to the pre-hospital setting – to the ambulance transporting the patients to the hospital,” Southerland said.

The study results have been published online by the scientific journal Neurology. Continuing their research, Southerland and his team are conducting a trial enrolling real stroke patients, with the goal of eventually implementing a study across the nation in a multi-center clinical trial.

The UVA team includes key members in the departments of Neurology and Emergency Medicine and the Center for Telehealth. The ambulance agencies participating in the study include UVA Medic V and regional partners in the Thomas Jefferson EMS Council, including the Western Albemarle, Greene, Fluvanna, Louisa, Buckingham and Augusta county rescue squads.

Here Is What You Need to Know About the New Coronavirus Variant, Omicron END_OF_DOCUMENT_TOKEN_TO_BE_REPLACED

Fall Is in the Air on Grounds END_OF_DOCUMENT_TOKEN_TO_BE_REPLACED

Meet the Cats and Dogs Your CVC Donation Supports END_OF_DOCUMENT_TOKEN_TO_BE_REPLACED