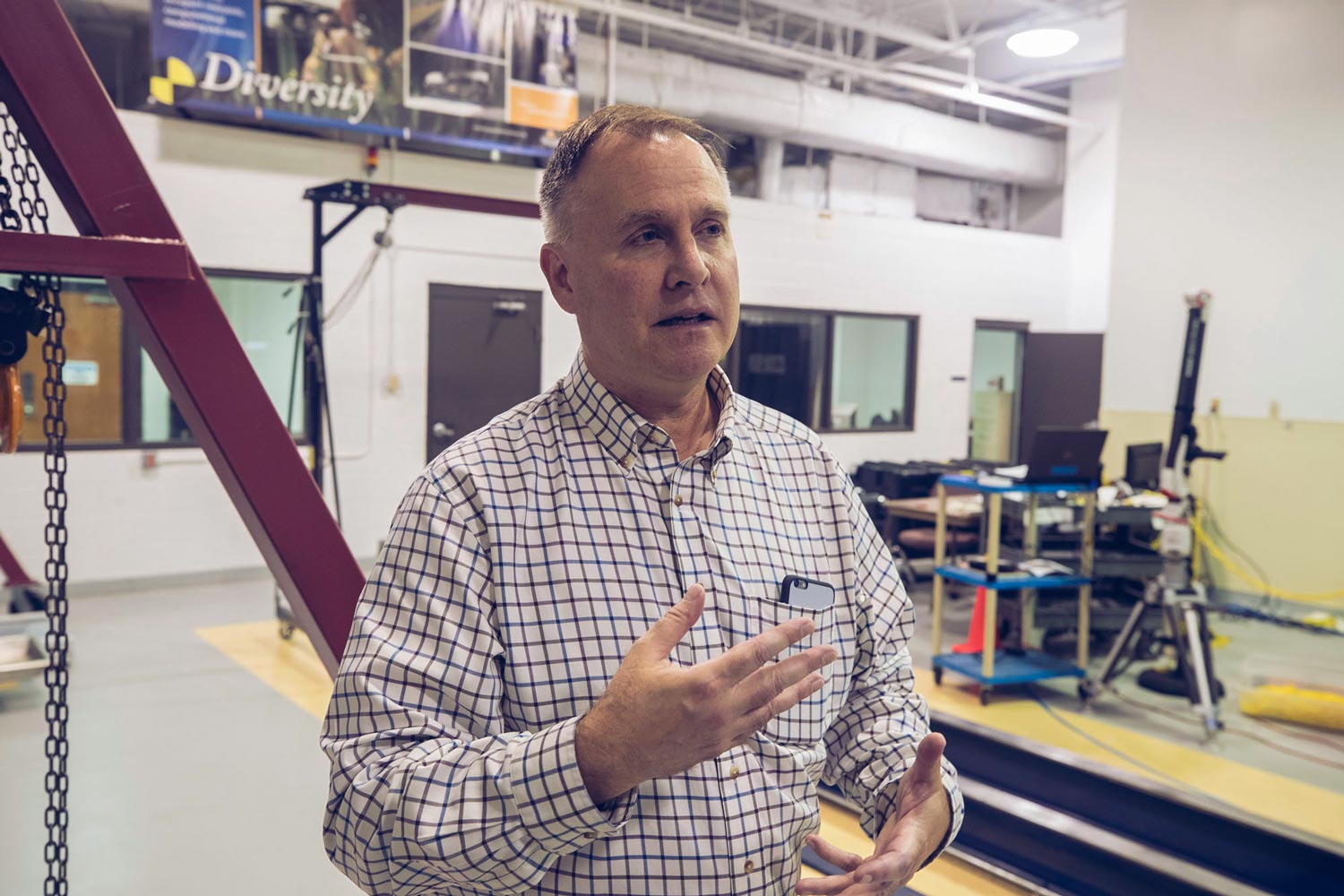 The University of Virginia took a significant step forward Friday in efforts to protect soldiers in vehicles targeted by land mines or bombs.

UVA is one of seven universities working with the U.S. Army to develop crash test dummies that can closely predict how the human body would behave during an under-body blast – the type of blast generated when land mines or improvised explosive devices, or IEDs, explode beneath a vehicle.

Though current levels of protective armor beneath military vehicles help diffuse and deflect the effects of the blasts, the Army sought to further decrease the occurrence of injuries to vehicle occupants. They turned to university labs to help solve the problem.

Over the past five years, mechanical engineer Robert Salzar, a principal scientist at UVA’s Center for Applied Biomechanics, and his team have been working with groups from the University of Michigan, Wayne State University in Detroit, Wake Forest University, Duke University and the Medical College of Wisconsin to gather data on how the human body responds to under-vehicle blasts.

The combined data from the seven universities went into the development of a dummy – called the Warrior Injury Assessment Manikan, or WIAMan – that was tested for the first time at UVA’s labs on Friday.

The tests, Salzar explained, were quite different from others done in his lab, where he and his team historically studied injuries that occur in car crashes. Most existing test dummies were designed to estimate the human response to those crashes, which differ in both magnitude and direction from those produced by IED blasts.

“Until this project, we really had not researched how the human body, in a seated position, responds to high-speed vertical loading,” he said, referring to forceful blasts from beneath a vehicle. “This is the first crash test dummy of its kind, and we will use these tests to see how well the dummy is performing.”

Frederick Hughes, the director of the WIAMan Engineering Office with the U.S. Army Research Laboratory, was on hand for Friday’s test. He said the project is extremely important to the Army’s ongoing efforts to protect its soldiers.

“We constantly develop new equipment for the military, specifically vehicle hardware, and it has to be designed to make our soldiers as safe as we can,” said Hughes, who retired from active duty in 2016 after 20 years of service. “These tests will help us better understand what is happening inside vehicles struck by IEDs so that we can build safer systems for our soldiers.”

Universities, Hughes said, have played a critical role in advancing toward that goal.

“We have the best biomedical minds that are currently supporting the automotive industry, being brought into the military world to make our vehicles safer and help the young men and women serving our country come home safely,” he said. “The faculty and the students are putting so much energy into something that will really impact national security, and I think that’s so impressive.”

The WIAMan project is among the most complex of its kind ever undertaken. Salzar called it the largest biomechanics test program in the world to be conducted outside of government facilities. Completing a research program at that scale required not just one university, but seven.

“This is a very large program, and it was clear that no one university could do this alone,” Salzar said.

Program Manager Mark Angelos, who is based at the Johns Hopkins Applied Physics Laboratory, agreed.

"We plan to keep this team of universities together for a long time," he said, speaking from UVA's labs. "What we are doing here today, testing the first of this next generation of mannequins, will provide valuable biodata for not only this progrma, but also for the advancement of biomechanics."

To conduct the tests, Salzar’s team – including three UVA engineering graduate students – positioned the dummy in a horizontal sled system they created to simulate the force generated when an IED explodes beneath a vehicle. Using a highly concentrated impact to the seat and floor of the seat system, the blast simulator subjects the dummy to realistic accelerations similar to those seen in live-fire testing.

“The system can deliver 2,000 Gs of accelerations in 1.5 milliseconds, which is well beyond what one can usually do in a laboratory setting,” Salzar said.

While Salzar’s team is finishing with this round of tests, teams at other schools are simultaneously conducting similar experiments, often focusing on specific variables or parts of the body, to paint a holistic picture of how IED blasts affect soldiers sitting in the vehicles.

Then, in the next phase of the project, the Army will use the dummies to test how protective seating systems and vehicle designs will perform in the field.

“The ultimate goal is to be able to predict injury patterns so that we can tell, in great detail, which vehicle designs will best protect the soldiers,” Salzar said.

Do You Know the History of Your Favorite Corner Spots? END_OF_DOCUMENT_TOKEN_TO_BE_REPLACED

Netflix to Add Ads. Why This Could Be a ‘Game-Changer’ for Your Viewing Experience END_OF_DOCUMENT_TOKEN_TO_BE_REPLACED

What’s Next for UVA’s Class of 2022? END_OF_DOCUMENT_TOKEN_TO_BE_REPLACED