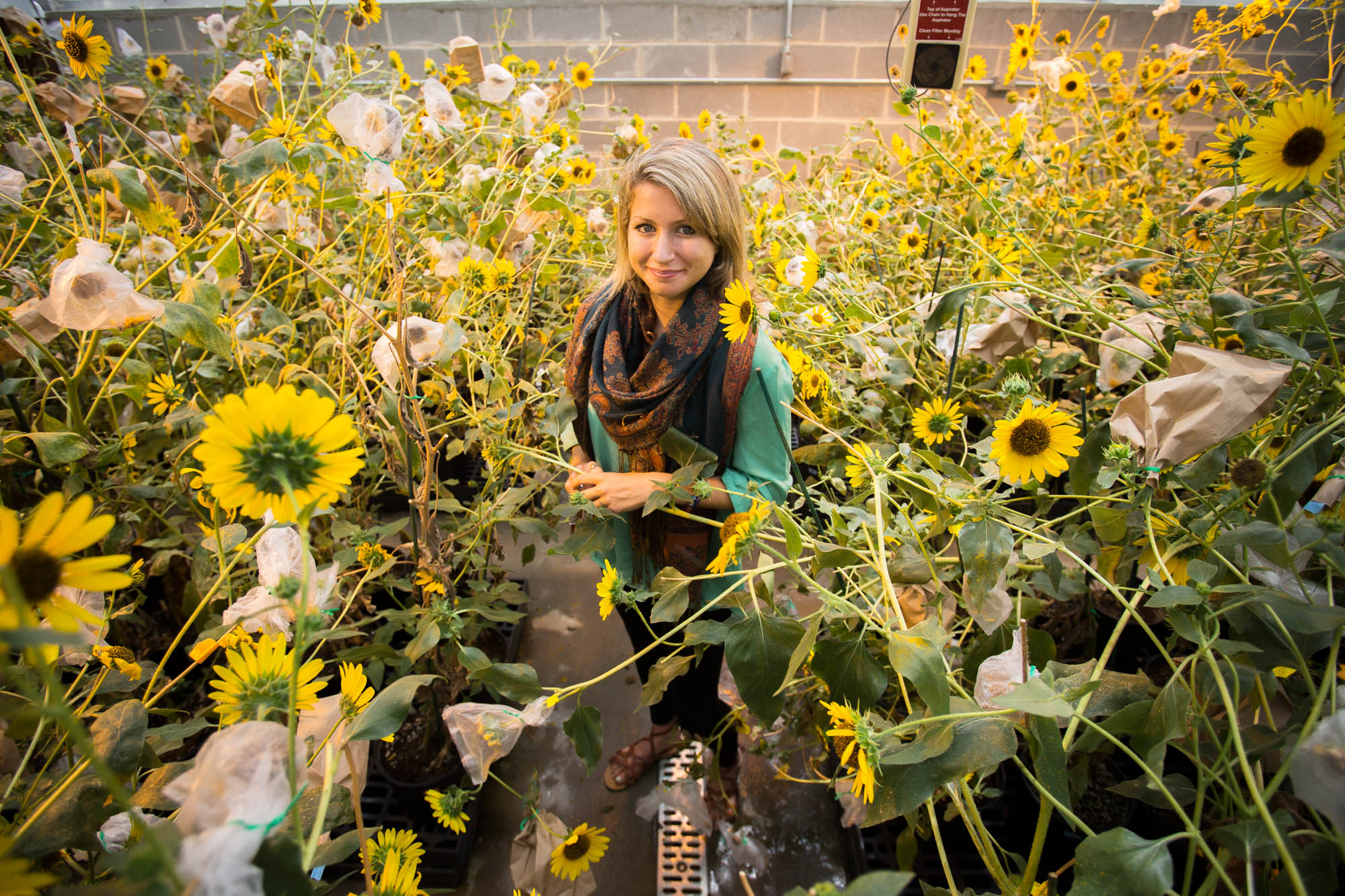 Call it the wonder plant – a flower that can either absorb toxic metals and radiation out of the soil or prevent most of them from entering its system and be safe to consume, depending on the variety.

It’s also beautiful, native to the Americas and begins to bloom in July. It’s the sunflower, and its ability to heal the environment has inspired one U.Va. undergraduate researcher to spend her summer examining the soil-absorbing properties of the stalky plant with the showy yellow flowerheads.

Rising fourth-year student Catie Kitrinos, a biology and anthropology major from Springfield is researching genetic variation in the sun-loving plant as part of her Harrison Undergraduate Research Award, with the aim of mapping the ability of the sunflower to absorb heavy metals across its genome.

The project has a huge relevancy and the potential to contribute better information about how best to use sunflowers, Kitrinos said. She noted that after both the Fukushima and Chernobyl nuclear incidents, sunflower fields were planted across the affected areas in an effort to absorb radiation, then were harvested and disposed of safely.

“[Sunflowers] are able to take heavy metals from contaminated soil in a way that’s completely natural and un-harmful to the soil and its surrounding ecosystems,” Kitrinos said. “They’re called ‘phytoremediators.’”

Other plants can be phytoremediators as well, but sunflowers are particularly effective because they’re so large, she said.

Over the course of the next year, she’ll help plant close to 1,700 sunflowers in the lab of Assistant Professor of Biology Benjamin Blackman, testing between 250 and 280 genotypes. That will map out 85 to 90 percent of the genome, an important step in finding the best sunflower breed to use in environmental cleanup.

Kitrinos is testing sunflower absorption of zinc and eventually copper, common elements found in fertilizers, pollution and runoff that are easy to measure over a large data set, according to Blackman, Kitrinos’ faculty mentor for the project. Blackman has published several studies on the evolutionary processes of sunflowers.

“Sunflowers are hyper-accumulators, which means they uptake metals from soil in large quantities,” he said. “In general, phytoremediation provides a much less invasive way to clean soil than digging it all out of the ground or using other treatments – and it’s certainly much cheaper.”

But the sunflower types that refuse to absorb metals are important too, for reasons that affect American consumers.

This summer she’s working with lab technicians and a high school assistant to manage the menagerie of sunflowers that have filled the biology department’s greenhouse. To carry out the experiment, they infuse the soil with different levels of zinc, grow the plants over four weeks, and then carry them to the lab for testing.

Kitrinos uses a photospectrometer to measure the amount of metal absorbed by the plant, and also examines where it happens – the root, stem or leaf.  “If you’re looking for a leaf that’s going to tolerate the zinc well for farming purposes, you don’t want a genotype that’s going to allocate it in its leaves, because that might hurt its ability to undergo photosynthesis and grow,” she said.

She plans to turn the findings into a paper with Blackman and other postdoctoral researchers who helped get the project on its feet.

The Harrison grant and support from the Miller Agricultural Fund have paid for her supplies, including the zinc sulfate, soil and photospectrometer materials, as well as living expenses.

It’s Copperhead Season in Virginia. Here Is What You Need to Know END_OF_DOCUMENT_TOKEN_TO_BE_REPLACED

What’s Next for UVA’s Class of 2022? END_OF_DOCUMENT_TOKEN_TO_BE_REPLACED