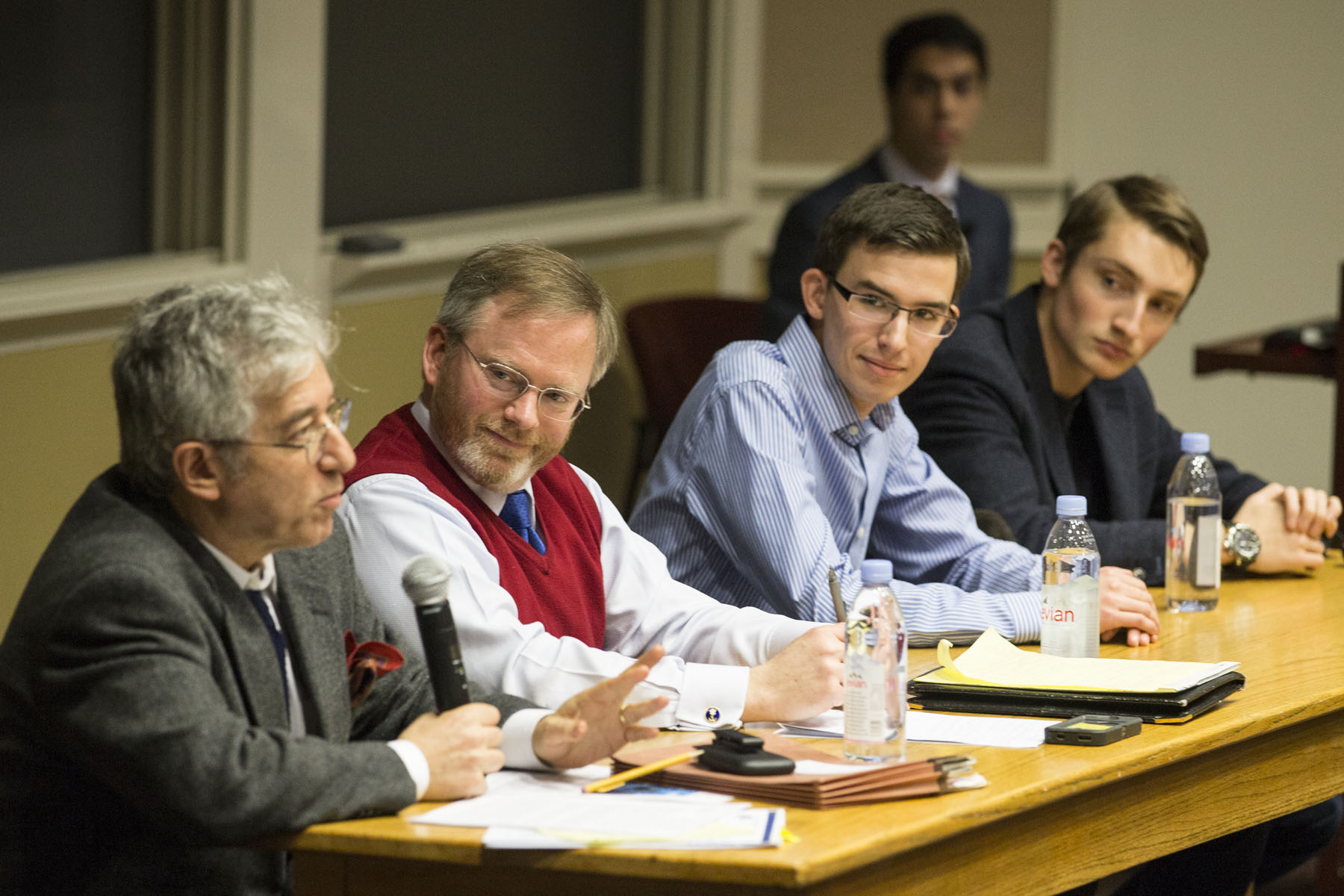 When the University of Virginia’s Slavic Student Association decided weeks ago to stage a forum about antigovernment demonstrations in Ukraine, the group’s members had no way of knowing their event would take place just as the crisis in Kiev came to a head.

“It was one of our planned events for the semester,” said Slavic Student Association president Anna Buynova, a fourth-year student in the McIntire School of Commerce.

The four-person panel featured two students with ties to Ukraine and two experts in post-Soviet politics. Roman Gryniv, a fourth-year student majoring in mathematics and economics, and Mateo Diachok, a third-year student who majors in urban planning and foreign affairs, spoke at the event.

Gryniv and Diachok spoke alongside Leon Aron, resident scholar and director of Russian studies at the American Enterprise Institute, and James Greene, senior adviser for the U.S.-Ukraine Business Council. Greene, who lives in Charlottesville, is also the president of Effective Engagement Strategies, a firm that focuses on international business development.

The event was entirely planned by students, said Gabriel Noronha, a third-year foreign affairs and economics major who moderated the discussion.

Protests in Ukraine began in November when the Ukrainian government suspended plans to sign a trade agreement with the European Union. For the next three months, demonstrators decrying human rights violations and abuses of power by President Viktor Yanukovych camped out on the Maidan, Kiev’s central plaza. The Maidan is also known as Independence Square.

Tuesday evening, days before the already-scheduled U.Va. panel discussion, protesters set fire to barricades around Independence Square in an attempt to ward off riot police. Police had shot several protesters that day.

Violence continued to escalate. Thursday was the bloodiest day since the protests began.

The morning of the U.Va. event, news broke that Yanukovych had signed an accord with opposition leaders. He agreed to hold elections in December and reduce presidential powers. The Ukrainian Parliament also voted to release former Prime Minister Yulia Tymoshenko, Yanukovych’s political rival, from the penitentiary in eastern Ukraine where she had been imprisoned for more than two years.

The panelists found themselves commenting on a rapidly developing situation.

“As a moderator, I’d designed all the questions ahead of time,” Noronha said Friday. “[But] it basically got decided this morning.”

The outbreak of violence drove student interest in the Ukraine crisis. The attendance of about 100 audience members exceeded the expectations of the event’s organizers, Buynova said.

Yuri Urbanovich, a lecturer in the department of Slavic Languages and Literatures, introduced the panel.

“My heart is bleeding when I see what’s going on in one of the most beautiful European cities, the city of Kiev,” Urbanovich said. The students asked him to give opening remarks because he teaches “a number of courses related to the post-Soviet region,” he said after the panel. Urbanovich also holds lectureships in the School of Continuing & Professional Studies and the Woodrow Wilson Department of Politics.

“We have students who come to U.Va. from Ukraine, and we have many American students of Ukrainian descent,” he said. “In the U.S., we have a huge Ukrainian diaspora.”

Gryniv was the first panelist to present. He began his remarks by calling for a moment of silence to acknowledge the protesters who had died in the days before.

He then offered a brief history of Ukraine, which in the Middle Ages was a powerful economic and cultural center bearing the name Kievan Rus. “Ukraine is a pretty young state, but it is a really old country,” he said.

Gryniv discussed divisions between the eastern and western regions of the country. Western Ukraine is, in general, more pro-European and contains more Ukrainian speakers, Gryniv said. The eastern region, from which Yanukovych drew most of his support, leans more toward Russia.

He showed a photo – also published in The New York Times – of a nurse who had been shot through the neck while tending to wounded protesters. Gryniv mentioned his girlfriend, a medical student in Hungary who went to Ukraine for the protests.

“It could have been her,” he said.

Diachok spoke next. He had visited Kiev in December, while the protests were peaceful. He shared photos he had taken observing the demonstrations on Independence Square.

Gryniv and Diachok have strong ties to Ukraine. Diachok comes from a Ukrainian family. He was born in New York and has lived in Washington, D.C. – both cities with vibrant Ukrainian populations, he said.

Gryniv was born in Lviv, a city in Western Ukraine. U.Va.’s international reputation lured him to Charlottesville, he said. After he graduates in May, he plans to return to Ukraine to pursue a career in banking.

“In my short lifetime, I’ve already taken part in two revolutions,” Gryniv said after the panel. “I vividly remember taking part in the Orange Revolution,” protests that followed allegations of vote rigging in the 2004 Ukrainian presidential elections.

Aron discussed Ukraine’s relationship with Russia. Russian President Vladimir Putin, trying to preserve hegemony over post-Soviet states, involved himself closely in Ukraine’s internal unrest – whispering into Yanukovych’s ear and pressing him away from cooperation with the European Union.

This was a “huge strategic error,” Aron said. “He owns Yanukovych now. A defeat for Yanukovych is by extension a defeat for Putin.”

Last week’s events marked a turn that could have far-reaching geopolitical effects, Aron said. “I think this regime is dead,” Aron pronounced during the event’s question-and-answer session.

Greene, who lived in Ukraine for seven years, criticized the U.S. for not imposing sanctions on the Ukrainian regime.

“We have not effectively used the instruments of power to support the values we have inspired,” Greene said.

Caroline Weakland, a first-year student in the College, was one of the students in attendance.

“The makeup of the panel surprised me – that two of the four were students who had pictures and personal stories and connections,” she said. “That made it seem a lot more real, and it was more of the U.Va. community instead of ‘across the Atlantic Ocean there’s this problem going on between this group and this group.’”

Buynova said she hoped students came away from the event with a richer understanding of the situation unfolding in Eastern Europe.

“I think that any educated individual needs to strive to understand what’s going on in the world,” Buynova said.

Do You Know the History of Your Favorite Corner Spots? END_OF_DOCUMENT_TOKEN_TO_BE_REPLACED

Netflix to Add Ads. Why This Could Be a ‘Game-Changer’ for Your Viewing Experience END_OF_DOCUMENT_TOKEN_TO_BE_REPLACED

What’s Next for UVA’s Class of 2022? END_OF_DOCUMENT_TOKEN_TO_BE_REPLACED