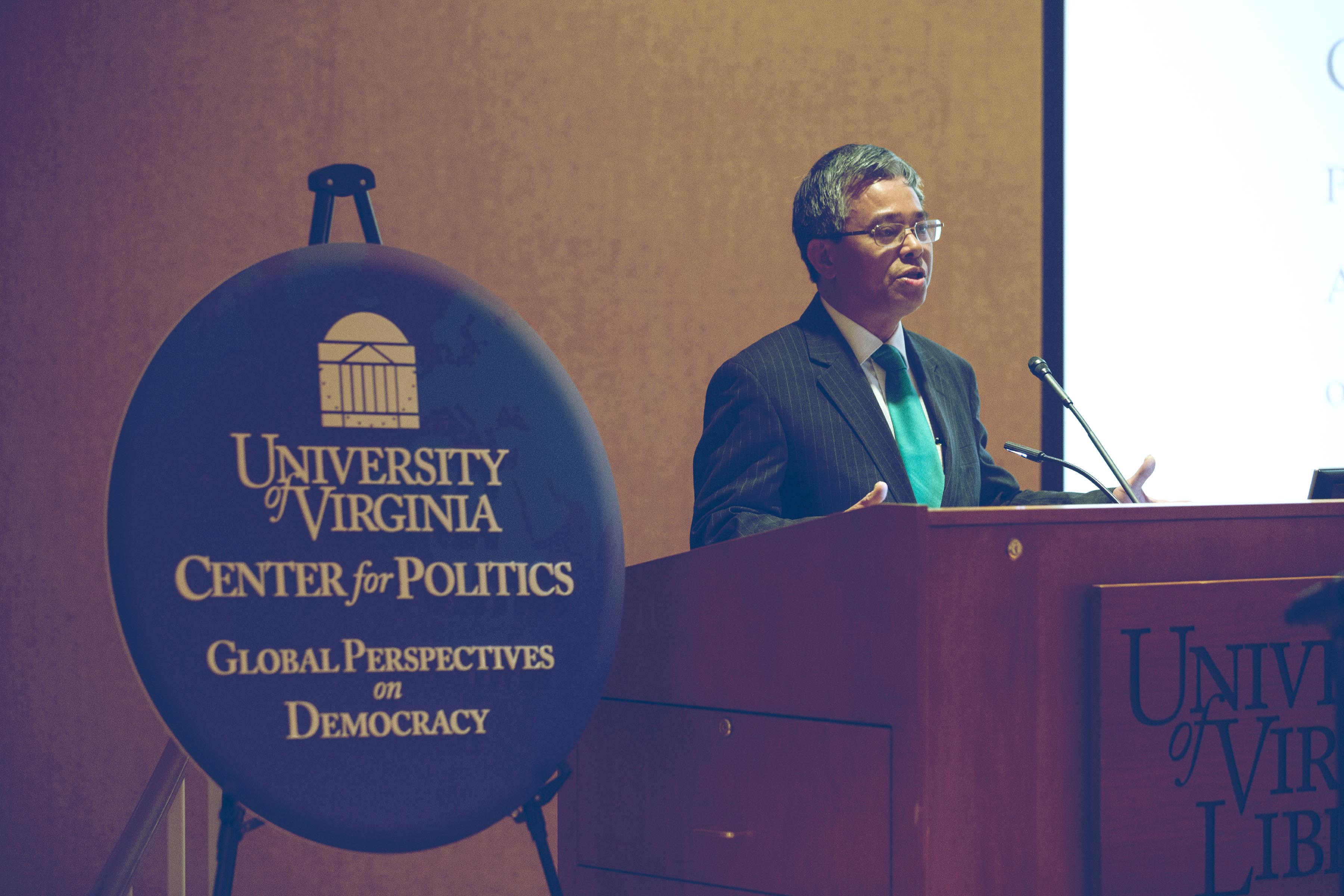 While serving as the United States’ minister to France in 1787, Thomas Jefferson met Prince Canh, the 7-year-old son of Prince Nguyen Phúc Ánh of Vietnam. Canh was in France as a part of a mission seeking French assistance in restoring Ánh to power in the Southeast Asian country, which had been taken over by a rebel faction.

On Tuesday, almost 230 years after Jefferson encountered Vietnamese royalty in Paris, Vietnam’s ambassador the United States, Pham Quang Vinh, spoke to around 100 students, faculty and guests on the Grounds of the academic institution that Jefferson founded.

“Smaller countries, like the ASEAN countries, don’t want a major power to dominate the region. We want the major powers to work together in stable manner.” -- Pham Quang Minh, Vietnam's Ambassador to the U.S.

Vinh’s visit to the University of Virginia came at an important time in U.S.-Vietnam relations. As the ambassador put it, the interactions of the two countries can be broken into three distinct periods, each 20 years long: war and conflict from 1955 to 1975, reconciliation from 1975 to 1995, and reestablished and burgeoning relations from 1995 to 2015.

If anything, 2016 may mark the beginning of a period in which the two countries are even more closely linked. As a part of the Association of Southeast Asian Nations, Vietnam is an important strategic partner. In February, President Obama hosted the ASEAN summit as a part of demonstrating the United States’ rebalanced foreign policy outlook toward that part of the globe.

U.S.-Vietnam relations have changed dramatically in a relatively short period of time. In April 1975, the Vietnam War ended when the North Vietnamese captured Saigon, the capital of South Vietnam (today called Ho Chi Minh City), concluding a conflict that saw millions of Vietnamese die, 58,220 American service members killed, and hundreds of thousands of others in the U.S. military left with physical and/or mental wounds.

Fast forward 40 years: The United States is now Vietnam’s top export market and the Southeast Asian nation imports many American products. Vinh highlighted the fact that the two nations’ trade relationship grew from about $500 million in 1995 to more than $40 billion in 2015. And that partnership is only likely to expand further: In October, the United States and 11 Pacific Rim nations, including Vietnam, reached a final accord on the Trans-Pacific Partnership, the largest regional trade deal in history, with the nations involved accounting for nearly 40 percent of the global economy. The final treaty language was signed Feb. 4, but awaits ratification by all signatories.

In the U.S., the pact has become a major part of the debate over trade in the 2016 presidential campaign. Democratic frontrunner Hillary Clinton previously supported the deal while serving as secretary of state, but now opposes it, likely due to pressure from Bernie Sanders, her primary opponent, who has long opposed international free trade agreements because he believes them to be harmful to American workers. On the Republican side, Donald Trump has described the deal as “insanity.” Together, Sanders and Trump represent a protectionist strain in U.S. politics that has been particularly prevalent in the 2016 cycle. 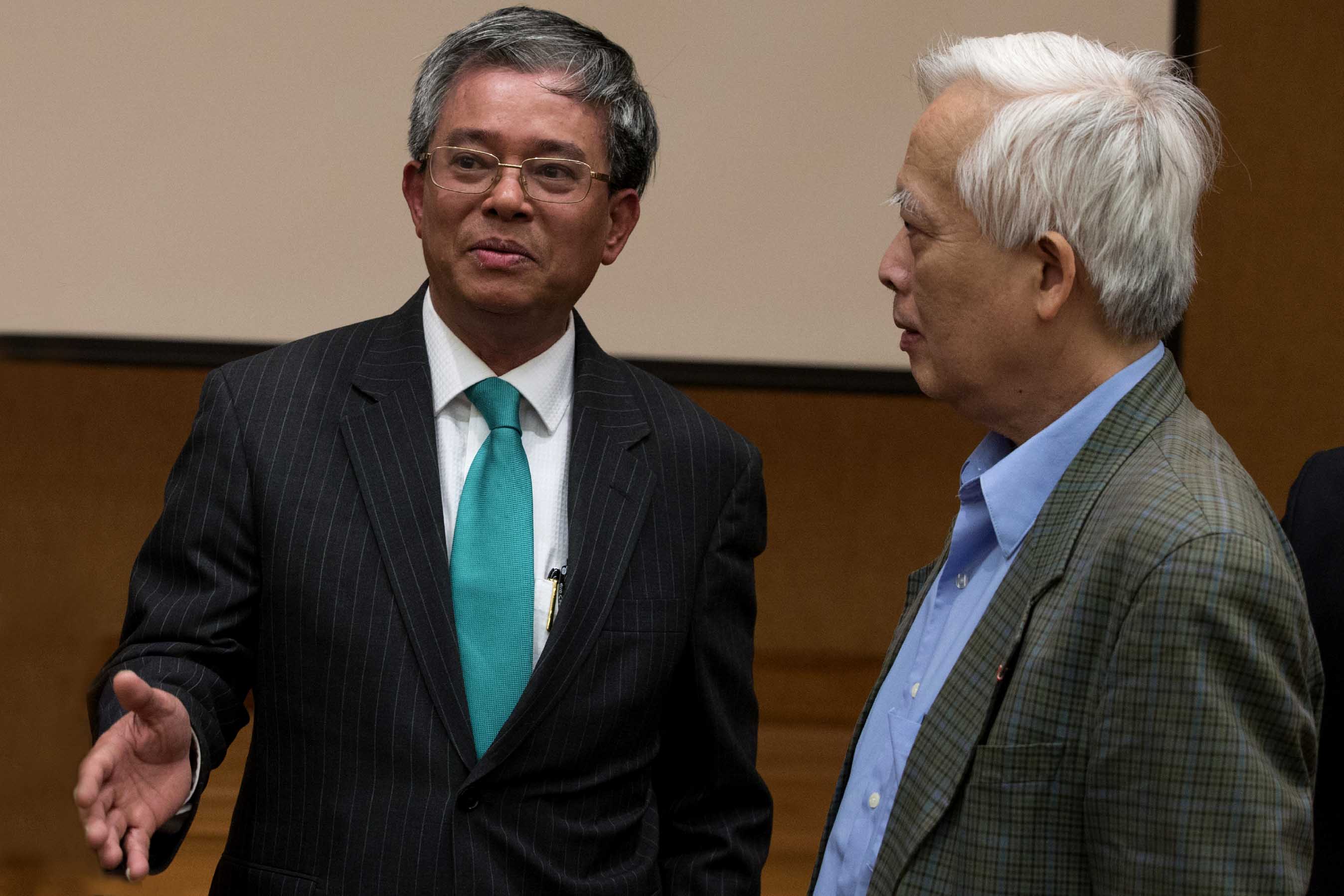 In light of these developments, Vinh had some advice – hopeful in tone, if perhaps hopeless in reality – for American politicians warily eyeing the Trans-Pacific Partnership. “My recommendation for the U.S.: Don’t look at the politics in the U.S., especially this year’s elections. Let’s work independently.” The ambassador said that Vietnam is working toward the full implementation of the agreement, and he hopes that the U.S. will ratify it as well.

Vinh said that in his meetings with members of Congress, he felt there was “strong support from both parties for improving and enhancing the [United States’] relationship with Vietnam.” The Washington Post reported earlier this week that Congress probably will not vote on the Trans-Pacific Partnership until after the November general election. Vinh, acknowledging resistance to past trades deals in Congress, said he was hopeful that members of Congress would assess the pact on its own merits and approve it.

One overlying aspect to the trade deal is the United States’ pivot toward Asia during the Obama administration, reflecting America’s economic and security interests in the Pacific Rim region. Vinh said that Washington’s increased focus on Asia has been welcomed by Vietnam and that the country’s rebalance must be sustained in the long run for the benefit of both nations.

Beyond just economic issues, the rise of China has raised security concerns for the U.S. and other Asian nations. Chinese incursions in the South China Sea, where China has built installations on small islets and challenged United Nations laws governing the freedom of the seas, have sparked disagreements between the U.S., Vietnam and China.

Regarding the role of global powers in the region, “Smaller countries, like the ASEAN countries, don’t want a major power to dominate the region,” the ambassador said. “We want the major powers to work together in stable manner.”

Appointed Vietnam’s ambassador to the United States in July 2014, Vinh has had a long diplomatic career. He has held various diplomatic positions since the late 1980s, including spending time in New York City as a part of Vietnam’s mission to the United Nations. His long and distinguished service has earned him the title of senior ambassador, the highest rank for a Vietnamese career diplomat.

Vinh’s visit was coordinated by the UVA Center for Politics, in partnership with the International Residential College and Asia Institute, as well as the Office of the President. The event is a part of the Center for Politics’ Global Perspectives on Democracy program’s Ambassador Series, which has also featured talks by the ambassadors of Argentina, Austria, Germany, Russia and the United Kingdom. Global Perspectives on Democracy is focused on fostering dialogue between the U.S. and other countries through public events and international exchanges.

Monkeypox Is Spreading, But University’s Risk Believed To Be Low END_OF_DOCUMENT_TOKEN_TO_BE_REPLACED

Q&A: Assessing the Risks and Rewards of Pelosi’s Plan to Visit Taiwan END_OF_DOCUMENT_TOKEN_TO_BE_REPLACED

These Giant Wind Turbines, Inspired by Palm Trees, May Be the Future of Renewable Energy END_OF_DOCUMENT_TOKEN_TO_BE_REPLACED