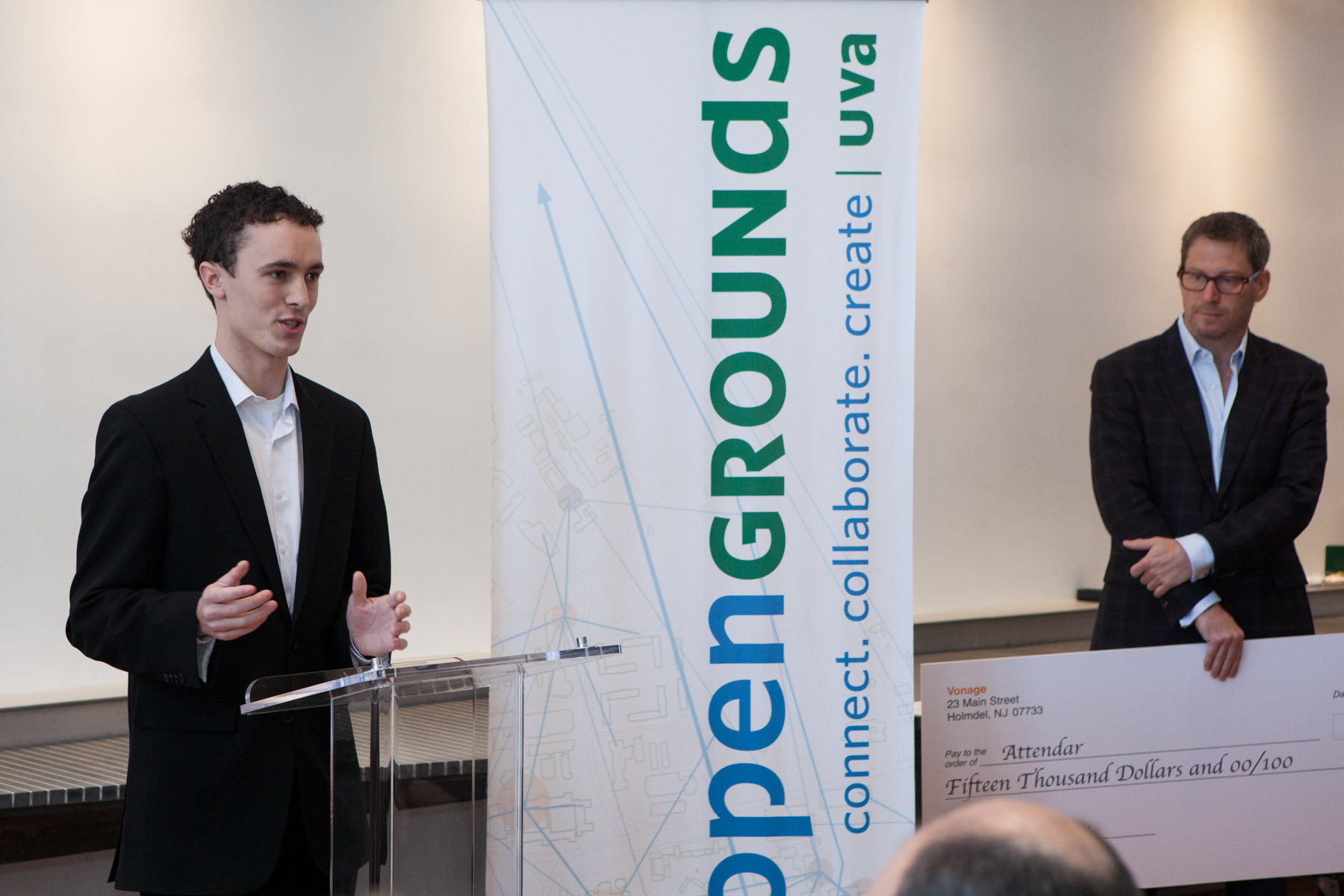 A visitor to a museum fires off a quick message asking for recommendations of the best exhibits to visit in under an hour. At a conference, dozens of audience members share reactions to a presentation. At a college football game, fans share video clips from the sidelines and tips on which bathrooms have the shortest lines.

Making that happen more easily is the goal of two complementary ideas for location-based social messaging that took home the top prizes – checks for $15,000 and $7,000 –­ in the University of Virginia’s Future of Social Messaging Concept Competition, sponsored by Vonage. The winners were awarded at a ceremony Friday morning at U.Va.’s OpenGrounds, a collaboration hub and think tank launched earlier this year that hosted the competition.

The first-place check went to Brent Baumgartner, a first-year computer science major in the School of Engineering and Applied Science, for his “Attendr” concept. Damian Warshall, a first-year MBA student at the Darden School of Business, took the second prize for his “Listen-In” concept.

The field of seven finalist teams was so strong that after hearing all the presentations over seven hours on Thursday, and deliberating for another three hours, the five judges couldn’t narrow the field to just the top three, as planned, and opted instead to name two teams as tied for third place, judge (and Vonage CEO) Marc Lefar said. Adding another third prize worth $3,000 boosted the total prize money to $28,000

The “Planr” and “Sort” concepts tied for third place. Planr, created by Ben Terner, a third-year computer science major, and Nik Phillipsen, a third-year systems engineering major, is a social messaging platform for events that enables users to seamlessly discover and organize dinners, concerts, movies and other activities with friends. Sort belonged to Murali Varadaraj, a first-year pre-med and pre-commerce student in the College of Arts & Sciences. It conveniently and intelligently aggregates social media and extracts social views as they develop.

“We challenged U.Va. students a little more than 10 weeks ago to develop ideas that could define the next evolution in social messaging,” said Lefar, a 1985 graduate of the McIntire School of Commerce, “and they delivered.”

The competition, launched in September, was open to any U.Va. student and drew 38 entries from students ranging from first-years through doctoral students, representing five of U.Va.’s 11 schools. Roughly 50 judges whittled the field down to the finalist teams, who presented their concepts Thursday.

The panel judged the teams primarily on three criteria, Lefar said to about 40 students and faculty packed into OpenGrounds Friday. They looked for a concept that identified a meaningful consumer need; presented a unique solution that not only solved the problem posed, but also had reasonable likelihood of customer adoption; and was technically feasible and scalable.

The panel had the technical expertise and experience to make those calls, noted judge Thomas C. Skalak, vice president for research at U.Va. Along with Lefar and Skalak, the other three judges were Chris Holden, a partner at Court Square Ventures, focused on technology investing; Baruch Sterman, a scientist and vice president of technology research at Vonage; and Von Wright, a consultant and former vice president for AT&T Consumer & Mobility.

During Thursday’s final presentations, the judges asked probing questions, but also offered lots of constructive feedback and advice on how best to further develop these ideas, Lefar said. “This was an opportunity to truly collaborate,” bringing together the expertise of industry veterans and students with fresh ideas, “to make these ideas better.”

The students’ energy and passion in bringing their concepts to life was matched with surprising poise and professionalism, Lefar said, comparable to the business pitches that venture capitalists see regularly.

“All of these were great ideas,” Holden said. “Two or three of the ideas have strong commercial potential, such that venture investors will take them very seriously.”

Vonage will closely review the finalist ideas, Lefar said, and may partner with the students to develop them further. Even if Vonage takes a pass, Holden and others will work to help these students take the next steps, Holden said.

One of those next steps should be a partnership between the two winners, Baumgartner and Warshall, Holden said. Both students agreed.