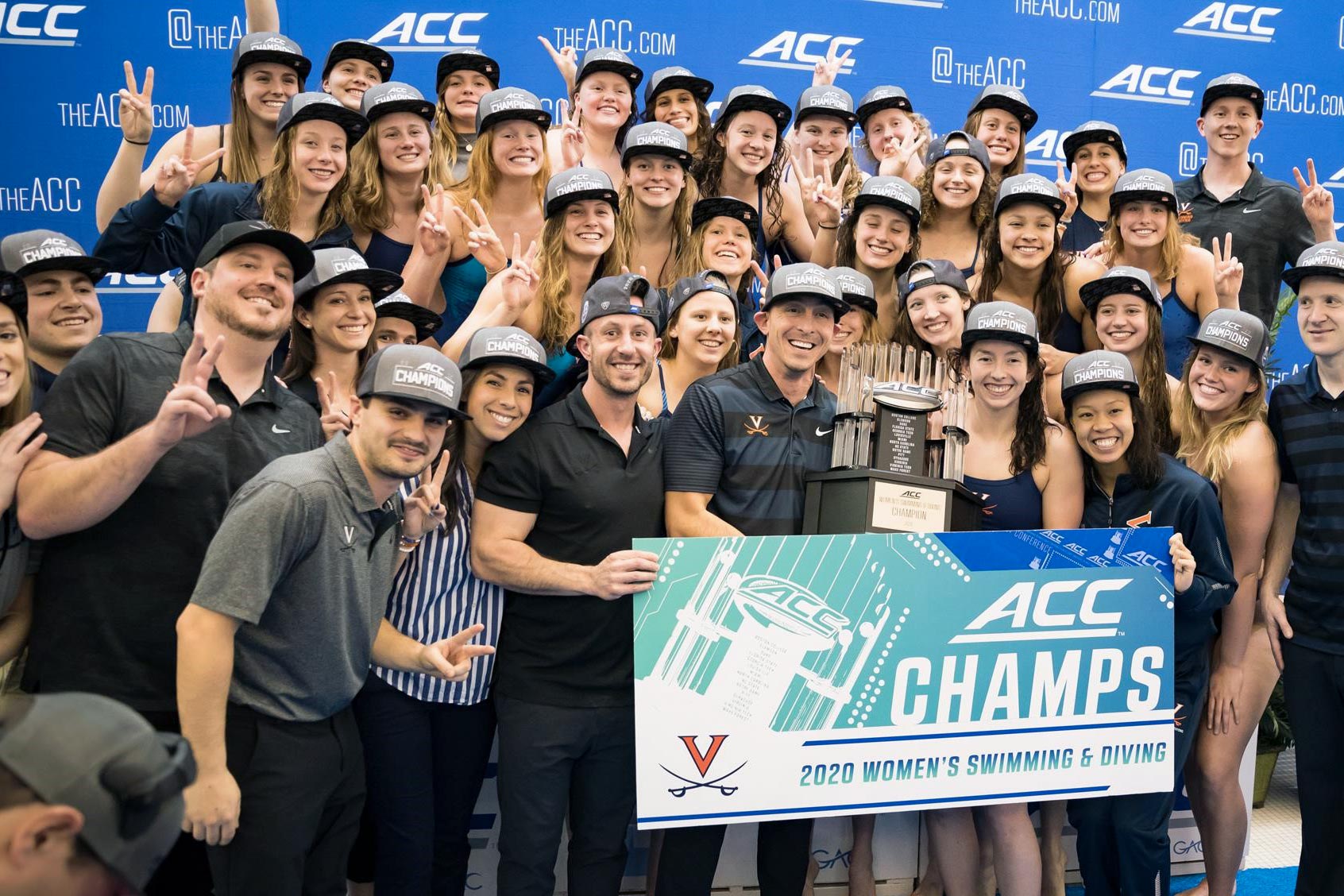 The University of Virginia women’s swimming and diving team won its 16th Atlantic Coast Conference Championship on Saturday at the Greensboro Aquatic Center, recording the best score in meet history with 1,492.5 points.

The win was the team’s 11th ACC team championship title since 2008.

“I couldn't be happier for this team of young ladies,” head coach Todd DeSorbo said. “They have been working together all year toward a common goal, and that goal was not necessarily to win the ACC championship, but outdo ourselves. I told them that I believed this was the best team in the history of the University of Virginia. So, the goal here at ACCs was to score more points than this team has ever scored. Day-to-day, event-to-event, we set out to do that, and they accomplished that. It was exciting to see.”

Third-year student Paige Madden, from Mobile, Alabama, was named the ACC Championship’s Most Valuable Swimmer. Madden won five ACC titles during the meet – three individual championships and two as part of relay teams – and scored 96 points. Madden is the first Cavalier to win the honor since Lauren Purdue won the award for her third time in 2013. Madden’s ACC Championship MVP award is the 14th in program history, which leads the ACC for most by a conference school.

DeSorbo called the championship “a full team effort,” with strong showings across the board.

“We had 21 athletes here –18 swimmers and three divers – and every single one of them contributed a large amount to that, whether it was points, support, cheering, excitement, energy. They all performed really well, and in the end that’s what won the title for us,” he said. “And we did score more point than any team in the history of the ACC. It’s a true testament to their hard work. We were just trying to have a lot of fun, and I think they did. When they are having fun, they perform really well.”

Dropping nearly eight seconds off her career-best time in the event, Madden swam a time of 15 minutes, 50.38 seconds to win the ACC title in the mile. Her time ranks second in UVA history and is the third-fastest time in the NCAA this season. Madden topped Saturday’s final in the 1,650-yard freestyle by more than 10 seconds, to record her fourth career individual ACC win. She won the 200- and 500-yard freestyle and was a member of the 400- and 800-yard freestyle relay teams at the meet. She now holds a total of eight career ACC titles, tying for 10th-most ACC championships in UVA history.

Hill won the 100-yard freestyle with a time of 47.47 seconds and aided the 400-yard freestyle relay team to a victory during the Saturday’s finals. Hill captured her 11th career ACC title, and ranks fifth in UVA history for most ACC championships. Including this year’s championship, she has finished first in three individual and eight relay events.

Douglass, Cuomo, Madden and Hill battled for a time of 3:10.57 in the 400-yard freestyle relay. The Cavaliers won the event by a second and captured their fourth ACC title in a relay at the meet. The time ranks third in program history.

Additionally, the Cavaliers concluded the meet with a combined 37 All-ACC honors.

Third-year Abby Richter, of Henderson, Nevada, earned a spot on the podium, finishing second in the 200-yard butterfly. She recorded a time of 1:54.09 in the finals of the event.

Third-year Emma Seiberlich, of Audubon, Pennsylvania, placed third in the 200-yard backstroke, recording a time of 1:53.13. She earned her first All-ACC honor of the week with the swim.

The Cavaliers will return to action for the men’s ACC Swimming Championships on Wednesday at the Greensboro Aquatic Center. The Cavaliers enter the meet in fifth place with 116 points, as the Virginia men’s divers concluded their conference championships at the women’s swimming and diving meet.

With their championship in hand, the women’s team is looking ahead to the NCAA Championships in March.

“We also talked about how this is just a steppingstone for NCAAs,” DeSorbo said. “We are not necessarily focused on this competition. It’s always great to win, and I don’t think it will ever get old to jump into the pool at the end of the competition with a conference championship, but the ultimate goal is moving toward contending for national titles.

What it Means to Be a Cavalier Baseball Player END_OF_DOCUMENT_TOKEN_TO_BE_REPLACED