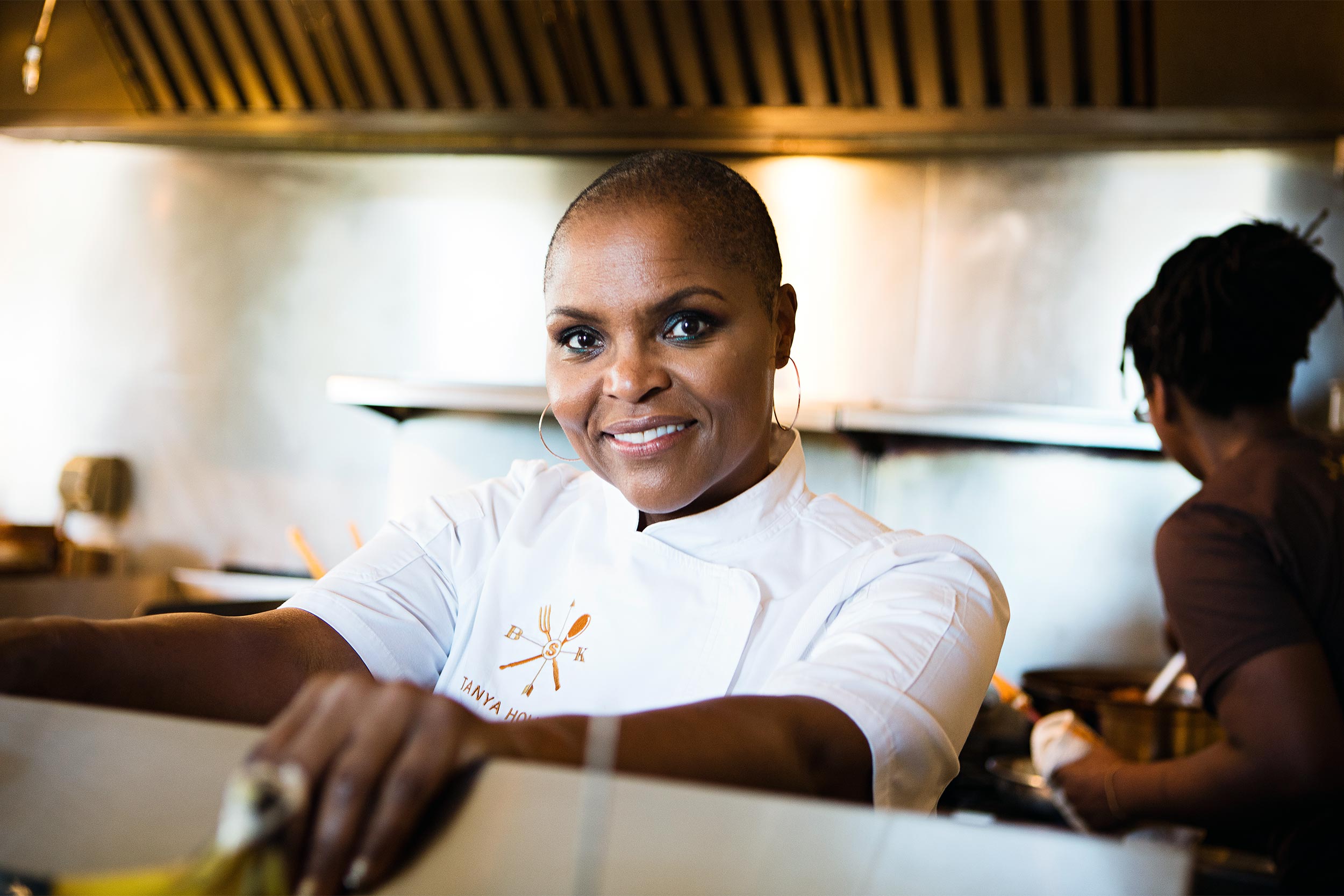 Tanya Holland is an award-winning chef, author and restauranteur who has appeared on Bravo TV’s “Top Chef” and hosted her own show, “Tanya’s Kitchen Table,” on Oprah Winfrey’s network. (Photos contributed by Tanya Holland)

Tanya Holland has made numerous appearances on NBC’s “Today” show, “Good Morning America” and The Food Network; was a contestant on Bravo TV’s “Top Chef”; and hosted her own show, “Tanya’s Kitchen Table,” on Oprah Winfrey’s OWN network.

But this celebrated Black celebrity chef and 1987 University of Virginia graduate started her food service career not in the grand kitchens of Europe, but on the Corner, working at two long-gone restaurants in the 1980s.

The first was Sophie’s. “They were training me to be a server,” Holland recalled. “And the managers there ended up opening St. Marteen Café a few years later. I worked at a place my third year called Snickers, which was like ridiculous.”

With such humble (and ridiculous) beginnings, it would be hard to predict that Holland, now an award-winning chef, author and restauranteur, would be prominently featured recently in The New York Times after the publication of her latest cookbook, “California Soul.” 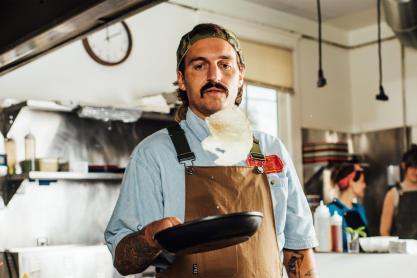 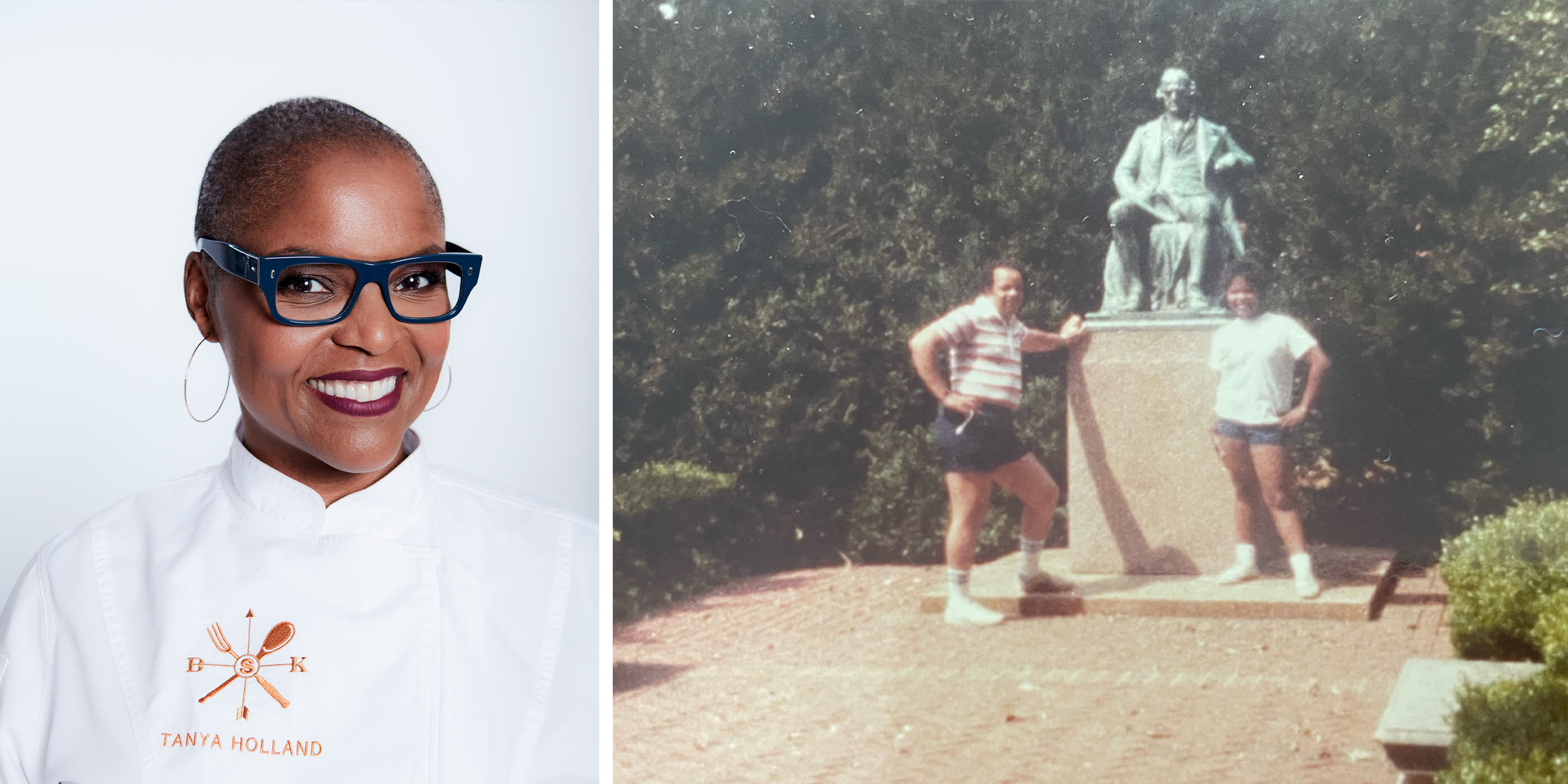 Holland, right, graduated from UVA in 1987 with a degree in Russian language and literature.

The splashy profile was no coincidence. Holland is dogged in her cooking and networking and had a previous relationship with the Times reporter, Korsha Wilson.

During the pandemic, the Times was looking for “new voices to be contributors for recipes,” Holland said. But she was intensely focused on running her celebrated, modern soul food restaurant, Brown Sugar Kitchen, in Oakland, California. “I just couldn’t see my way to it,” she said.

Still, she managed to write “California Soul” and asked Wilson if she would write a blurb for the cookbook. “And she said, ‘You know, I don’t want to do that because I want to be able to actually write about you.’”

With the sign-off from her editors, Wilson reached out to Holland later for a feature story that ran in November. “I had no idea. That spread they gave me, I mean, they don’t do that for just everyone,” Holland said. “I don’t think I’ve ever seen something like that.” But it’s not surprising, given her breadth of skills that range from excellent business management to a natural presence with the media.

Holland’s love of food can be traced to her parents, Annette and Hollis. They were born in Louisiana and Virginia, respectively, and created a gourmet cooking club with five other couples “from the time I was 7, so 1972 to 1992,” Holland said.

“So, when I got to college, it was my first year living off Grounds on Wertland [Street]. We were shopping for our own groceries and my roommates were buying mac and cheese in a box and tuna fish, and I was like, ‘Wait, what?’

“So I started cooking and we hosted a few dinner parties and I just loved that as a format for entertaining, for socializing,” she said.  Holland and a neighbor worked through the entire classic vegetarian Moosewood Cookbook during her fourth year at UVA.

Thinking back on all the good memories from La Varenne Ecole du Cuisine & from my time in France. Meeting Julia Child was...well, you can see it written all over my face. Here’s to all the women out there today, especially in kitchens and restaurants. #InternationalWomensDay pic.twitter.com/GdBbqTyAIR

After earning her degree in Russian language and literature at UVA, Holland went to France to study cooking at La Varenne Ecole du Cuisine. One day a surprise instructor arrived: Julia Child.

“Julia came to visit the cooking school that I attended in France – she was coming to give a lesson and we were thrilled because we just didn’t think that you’d ever meet Julia Child,” Holland said on “Welcome to Inside Julia’s Kitchen,” a production of the Julia Child Foundation for Gastronomy and the Culinary Art.

“She was just really charming and gracious and that’s what struck me the most. She was very accessible. … Everything she did, she was a very, from what I know, strong woman, strong-willed, determined as well. She’s still an inspiration,” she said.

“I came out west to California in 2001 and haven’t really looked back,” she said. “Even though it’s a pretty temperate climate, we really know when food is in season because it appears in the farmer’s markets and you know, just paying attention to that. I’ve gotten to know a lot of my local producers, and so some of them are featured in the book,” she said.

“California Soul” also includes historical sidebars about the migration of African Americans to California. The forward for the book is by writer Alice Walker, best known for her novel, “The Color Purple.”

“Reading it I was constantly thinking: I may never make these great dishes, but I will reread this cookbook for years to come, for the stories of the incredible gutsy, resourceful, intrepid Black people who not only came West to California from the South to begin new lives, but continued living lives of bravery, will, creativity, and inspiration for generations, following their initial arrival here, and continuing to this day.”