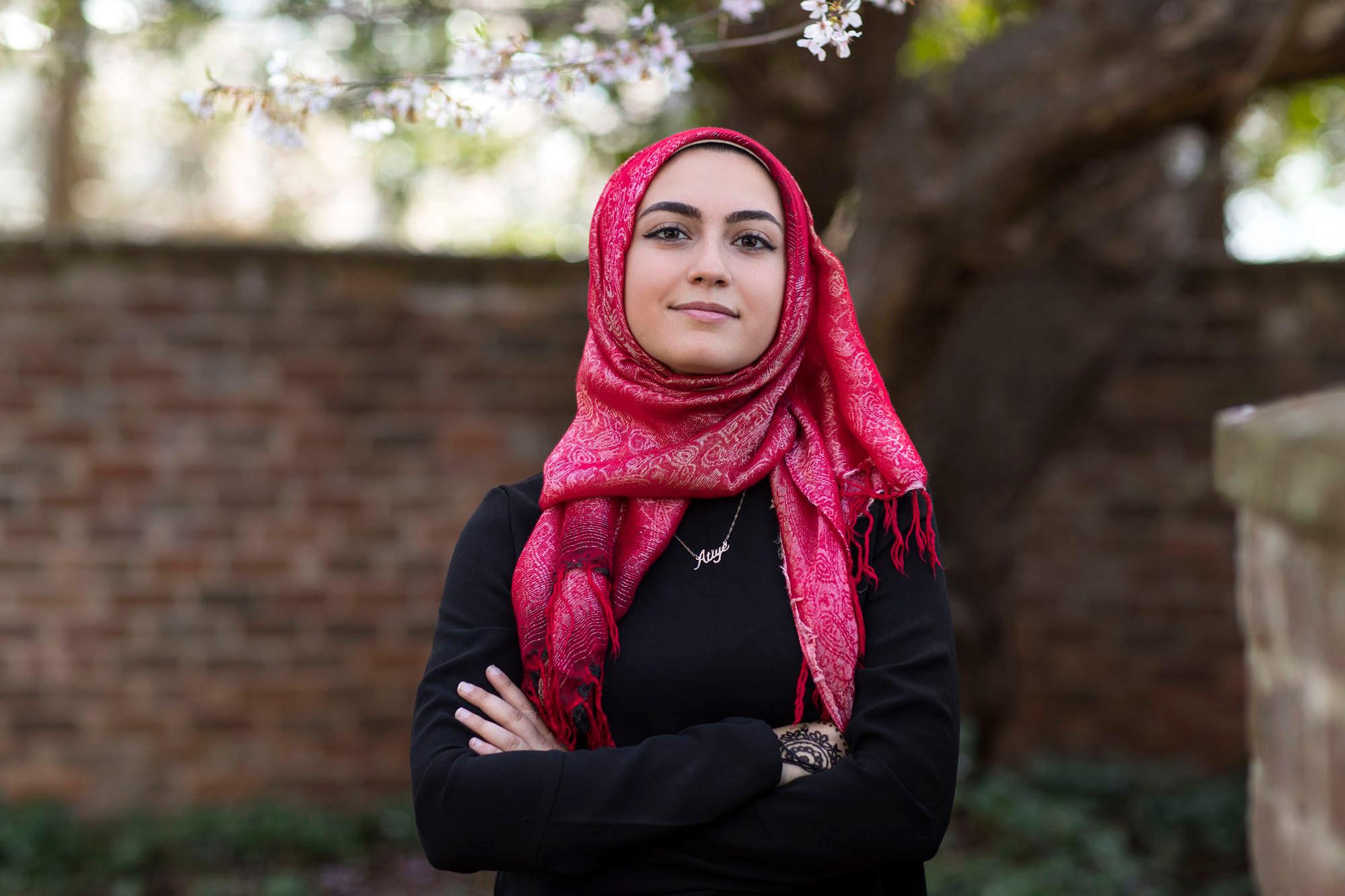 University of Virginia undergraduate Attiya Latif has been named a Harry S. Truman Foundation Scholar and will receive $30,000 toward graduate school and the opportunity to prepare for a career in public service leadership.

Latif, of Hagerstown, Maryland, is a Jefferson Scholar and an Echols Scholar. The third-year political and social thought major is concentrating on Islam, politics and gender in the Middle East. She sees herself as a social activist and an advocate for the legal rights of Muslim women, she said.

In October, Latif found the word “terrorist” written outside her dormitory room and decided to do something positive about it.

“I decided to channel student energy by spearheading a two-week campaign against hate speech, entitled ‘Eliminate the Hate,’” Latif told the Truman Scholarship judges. “The next day, I reached out to 70 minority organizations, both undergraduate and graduate, to mobilize students who were tired of apathy toward bigotry.”

Latif is student director of the Multicultural Student Center, represents the College of Arts & Sciences on UVA’s Honor Committee and is a member of the Raven Society. She received a Harrison Undergraduate Research Grant and a Meriwether Lewis Fellowship. She served as an ambassador for the Middle Eastern Leadership Council and writes a blog for the Huffington Post.

An intern at Karamah, a non-governmental organization for Muslim women that advocates for human rights, Latif also interned at UVA’s Center for Politics and with the “Kerning Cultures” podcast about the Middle East.

Latif brought the annual World Hijab Day to UVA in her first year on Grounds to educate her fellow students about Muslim women’s experiences with prejudice and violence. She presented a TEDx talk on challenging expectations and stereotypes of Muslim women and defending “A Feminist’s Choice to Wear the Hijab.”

Farzaneh Milani, Raymond J. Nelson Professor of Middle Eastern and South Asian Languages and Cultures in the Women, Gender and Sexuality Department, said she was impressed with Latif from the first day she met her.

“In 35 years of teaching, I have come across exceptionally few students who match Attiya in her brilliance, rigorous work ethic, sharpness of mind, dignity and dedication to the welfare of the community,” Milani said. “In Attiya, one can see neither one extreme nor another, but a most harmonious balance of seemingly incongruous opposites. She is wise beyond her years and combines a generous supply of pragmatic wisdom with visionary perspectives. She is able to take risks in a state of perfect calm and grace. She holds certain principles non-negotiable, and at the same time is flexible and tolerant in the best sense of the word – full of humility, passion and compassion.”

Kim Forde-Mazrui, Mortimer M. Caplin Professor of Law and the director of the Center for the Study of Race and Law, said Latif is driven by empowering others.

“Attiya’s leadership manifests in so many forms that it is difficult to describe her leadership succinctly,” he said. “She engages in public speaking and advocacy; writing periodical articles and grant applications; producing video, radio and podcast programs; collaborating; organizing; mobilizing; training and mentoring. She does so, moreover, while excelling in her studies.

“There is also a special quality about her, an inner force and light, which is difficult to capture in words. She is confident, yet humble; bold, yet sweet; unfailingly proper, yet willing to describe injustices with gruesomely graphic candor.”

Michael J. Smith, Thomas C. Sorensen Professor and director of the Program in Political and Social Thought, views Latif as a remarkable woman who combines political activism with extraordinary gifts of analysis, insight and compassion.

“From our first Political and Social Thought seminar, Attiya stood out as the intellectual leader of this exceptionally strong class,” Smith said. “Attiya is among those rare students who seem always to push the discussion to a deeper level, and her fellow students recognize this, treating her with great respect, bordering on deference. Weekly essays from Attiya all year have been lucid, intelligent and deeply engaging. It rapidly became clear to me that in Attiya Latif, we have a young woman of exceptional intellectual gifts and grace.”

Latif said she is excited about the prospect of meeting other Truman Scholars and learning about what it means to be “a true change agent.”

“It’s exciting to be part of a family of empowered individuals who are committed to public service and who are working to make the world a better place, and I have so much to learn from my peers,” she said.

The rigors of applying for a Truman Scholarship have helped her refine her outlook.

“I learned a lot about my willpower and my firm belief in legal advocacy for Muslim women, and I feel like the process has equipped me with better tools to use when approaching my future career,” she said.

A graduate of Smithsburg High School, Latif wants to pursue concurrent degrees at law and divinity schools, because she wants to understand the legal and political systems in the United States, as well as within South Asia and the Middle East, to advocate for Muslim women’s rights.

Learning that she had won the Truman Scholarship left her “shocked and so humbled,” she said. “I was in tears and so stunned. I feel so blessed and so grateful to God and to my family, professors, colleagues and friends, who constantly support me.”

Monkeypox Is Spreading, But University’s Risk Believed To Be Low END_OF_DOCUMENT_TOKEN_TO_BE_REPLACED

Q&A: Assessing the Risks and Rewards of Pelosi’s Plan to Visit Taiwan END_OF_DOCUMENT_TOKEN_TO_BE_REPLACED

These Giant Wind Turbines, Inspired by Palm Trees, May Be the Future of Renewable Energy END_OF_DOCUMENT_TOKEN_TO_BE_REPLACED