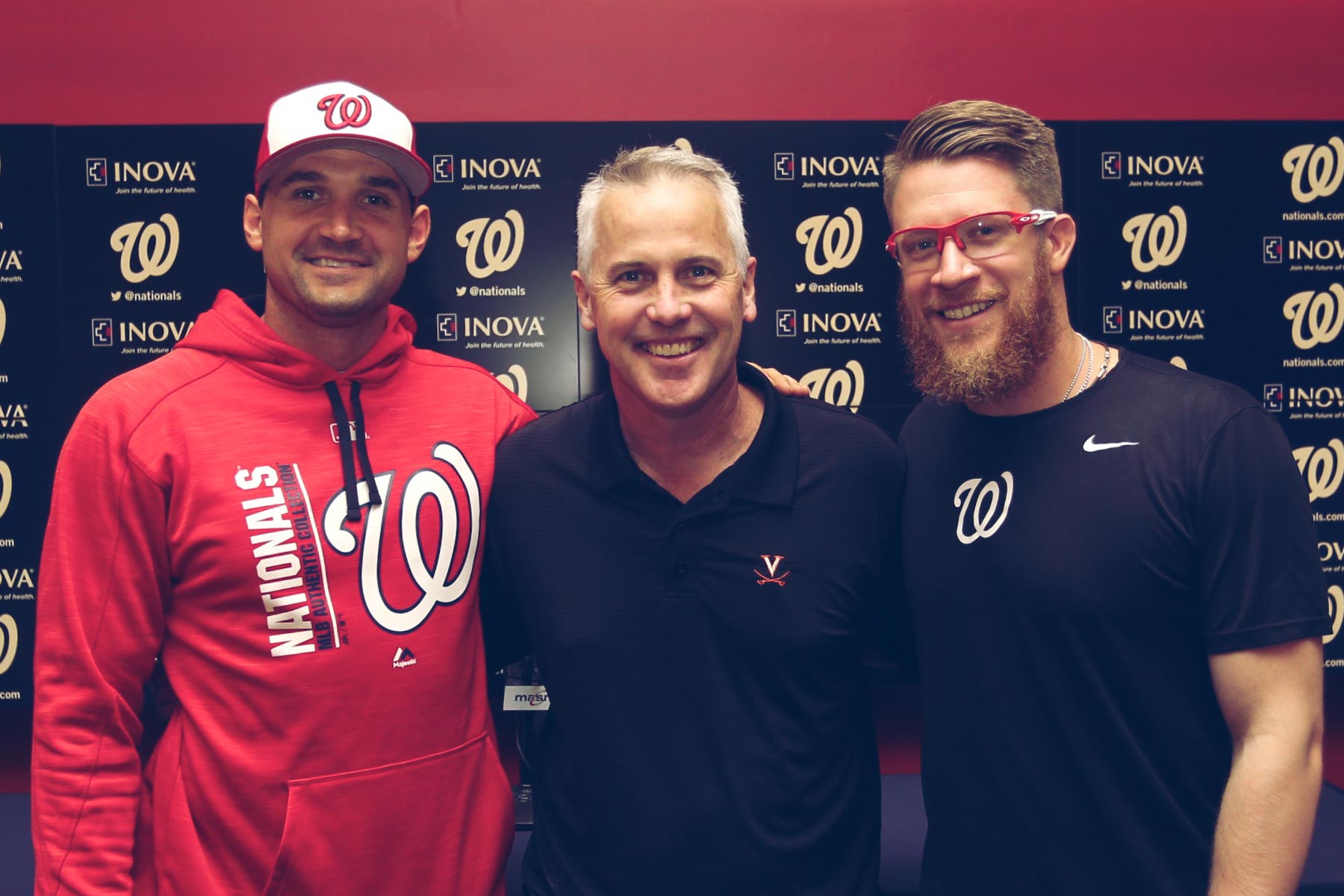 They spent most of the past decade on opposite coasts, in different leagues, on baseball teams that rarely met. But when the Oakland Athletics traded him to the Washington Nationals this month, Sean Doolittle almost immediately thought of one of his former University of Virginia teammates.

Ryan Zimmerman, 32, has become an institution with the Nationals, for whom he made his debut in September 2005, only a few months after concluding his illustrious UVA career.

That he would be reunited with Zimmerman, a National League starter in the All-Star game this month, “was one of the first things that dawned on me once the initial shock [of the trade] started to wear off,” said Doolittle, 30, who began his professional career as a first baseman but has been a relief pitcher in his six Major League Baseball seasons. 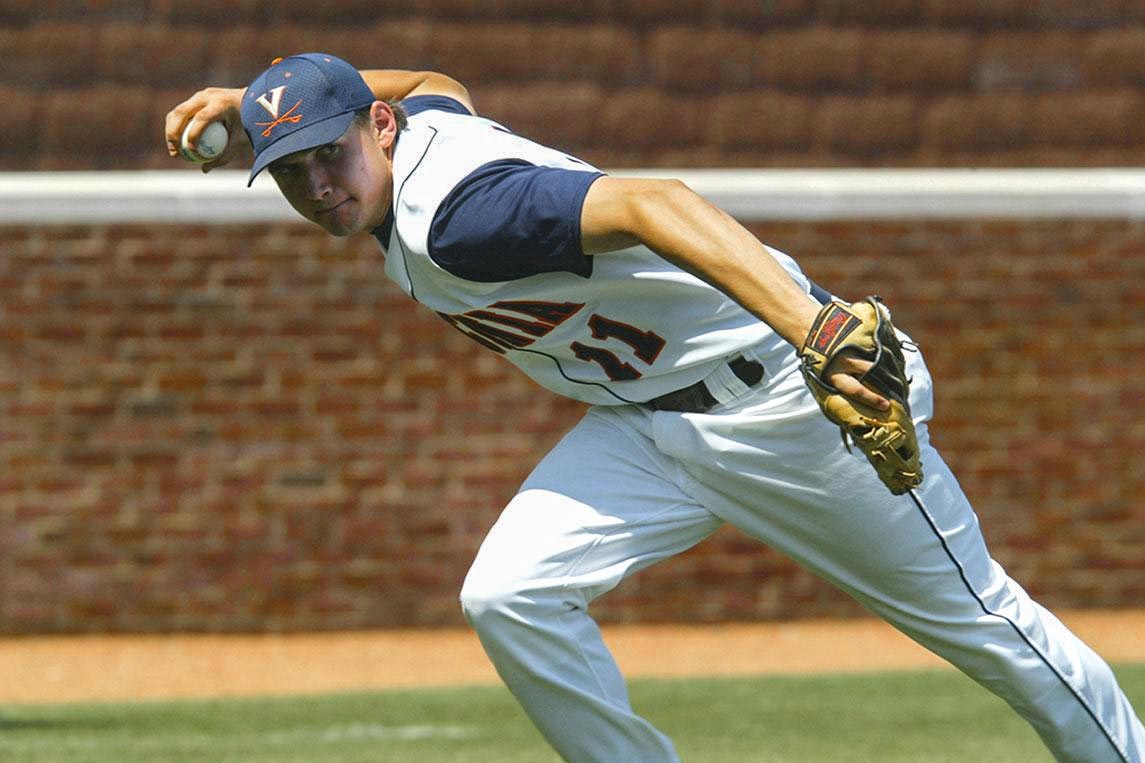 “You hear your name in the rumors, but nothing really prepares you for when you finally do get that news. You kind of have this flood of every emotion. You’re happy, you’re excited, you’re sad. It’s really bittersweet, especially for me, because [Oakland] was the only place I’d ever known. And then I started to think of all the positives, and that was definitely one of them: getting to play with Zim again and being closer to where I grew up and where I went to school.”

Zimmerman and Doolittle played together at UVA in 2005. Zimmerman, from Virginia Beach, was a junior, and Doolittle, from Tabernacle, New Jersey, was a freshman. On a team that finished 41-20 after losing in an NCAA regional in Corvallis, Oregon, Zimmerman played third base, batted third in the lineup and hit .393, with six home runs and 59 RBI. Doolittle batted cleanup and hit .313, with a team-high 11 homers. With 57 RBI, Doolittle was second on the team, and he excelled as a reliever (1.64 ERA) when he wasn’t playing first base.

“Honestly, I don’t remember too much [about 2005],” Zimmerman said, smiling, on a recent afternoon in the home clubhouse at Nationals Park. “I barely remember anything about me back then, let alone him.”

Doolittle said: “That was a long time ago, but for me, shoot, that was awesome, my first year in college. I really wasn’t sure how I was going to be able to contribute to the team. I was a kid from a small town in South Jersey. I wasn’t sure where I was going to stack up in the ACC. But it was a year where I developed a lot. I learned a lot, and Zim was a big part of that. 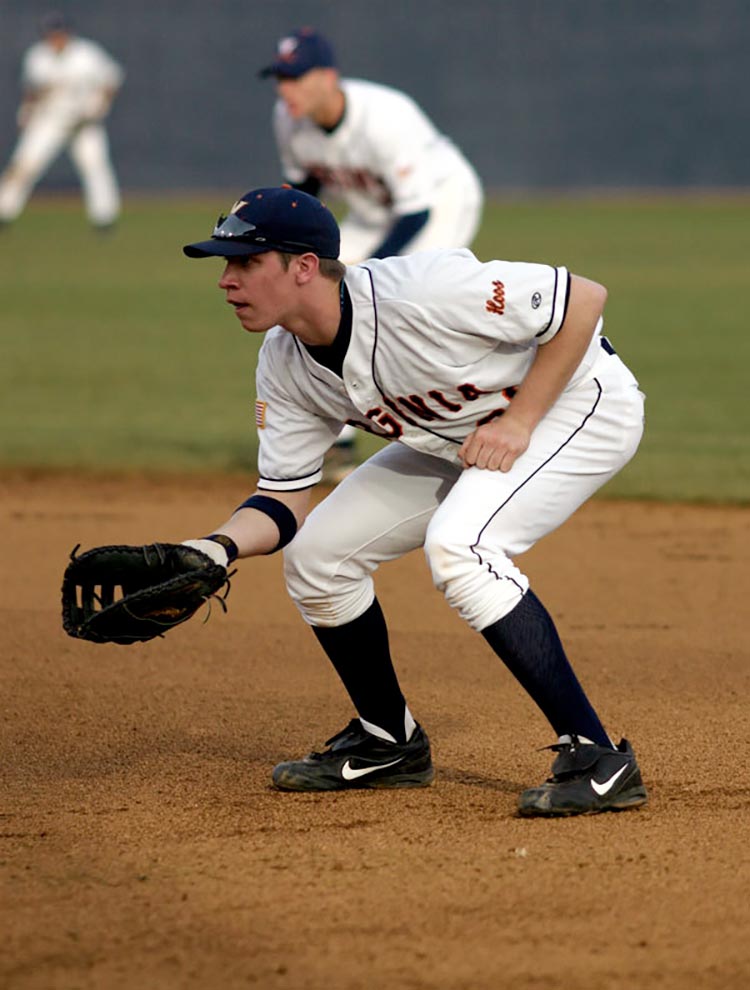 “But I think the thing that I remember about that team was how we were playing for recognition. We were kind of playing to put ourselves on the map. There were a lot of people that weren’t expecting anything out of us, not only across the ACC, but the country. In college baseball, Virginia wasn’t quite on the map yet, at least as a perennial contender. We kind of had a chip on our shoulder.”

The 2005 season was Brian O’Connor’s second as the Cavaliers’ head coach. In 2004, when their standouts included slugger Mark Reynolds, who’s now with the Colorado Rockies, the Wahoos advanced to the NCAA tournament for the first time since 1996.

The streak has yet to end. The ’Hoos have made 14 consecutive trips to the NCAA tournament under O’Connor, who guided them to a College World Series title in 2015. They were NCAA runners-up in 2014 and also advanced to the CWS in 2009 and 2011.

Zimmerman, who was recruited by O’Connor’s predecessor at UVA, Dennis Womack, admits he might not have predicted such a run of success for the program. Still, in his two seasons under O’Connor and assistants Kevin McMullan and Karl Kuhn, “I think a lot of us obviously noticed how good of coaches they were and how they got the best out of their players,” Zimmerman said.

Doolittle said he noticed “the kind of energy and commitment, the vision that Coach O’Connor and his staff had when they were recruiting my class. We were the first recruiting class that came through there [during O’Connor’s tenure]. That’s the kind of vision they had for the program. That’s the direction they were talking about taking things in. They didn’t just want to win now. They wanted to build something, and I’m so incredibly proud to be a part of the program, to be one of the recruiting classes that laid the groundwork for where they’re at now. It’s so cool to see where they’ve taken the program.”

It’s become common for former UVA players to reach the majors, and O’Connor was in Washington last week for the opening game of the series between the Nationals and the Rockies, for whom Reynolds has hit 22 home runs this season.

To see Zimmerman and Doolittle together again after more than a decade delights O’Connor, who called them “transformational players” in UVA’s rise to national prominence in the sport.

“Certainly they’re terrific baseball players and they’re representing us well at the highest level,” O’Connor said, “but in the end we’re most proud of the men they were here and what they’ve become.

“They represent the University with total class at the highest level. Both of those two guys are totally engaged in their community and making their communities better.

“I would classify them as givers and not takers. They’re living a dream, but they’re totally engaged in their communities and making things better. But they’re engaged back here, too.”

Zimmerman has warm memories of his time in Charlottesville, and he’s donated generously to the baseball program.

“I’m a big believer that I wouldn’t be where I’m at without spending those three years there,” Zimmerman said. “So it just seems right to give back and give other kids the same opportunity or an even better opportunity to try and get where I’m at. In the grand scheme of things, I’ve been lucky to be very successful here, and it’s the least I can do to give back a little bit to them, and it’s a place where, obviously when I’m done here, we’ll go back and visit. I love the town and the city, and I’m lucky enough to be close by where I can kind of shoot back [periodically].”

Zimmerman wasn’t drafted coming out of Kellam High School. In the 2004 MLB draft, the Atlanta Braves selected Doolittle in the 39th round. His decision to put pro baseball on hold, Doolittle said, proved to be a wise one.

At UVA, “I grew up so much, both as a person and as a baseball player,” said Doolittle, whose bushy red beard has become his trademark. “In hindsight, I’m so grateful that my parents were nudging me that direction, and once I started taking my college visits and I got on Grounds, I knew I wanted to go there. I wanted that experience that Virginia offered. It was great for me because I got to grow up. I got to learn about myself, and then I got to physically and mentally and emotionally mature over those three years, so that by the time I got to pro ball I knew the things that I had to do to give myself a chance to be successful.

“I had learned from older guys when I was at UVA, and I understood kind of the inner workings of an organization, about how you come in and you’re the young guy. You have to climb the ladder. You have to earn people’s respect through your work ethic, and the stuff I learned at UVA was crucial to me even having a chance at success in professional baseball.”

Before an enthusiastic crowd at Nationals Park against Milwaukee, both Zimmerman and Doolittle played memorable roles in Washington’s 8-5 win.

In the bottom of the eighth, Zimmerman’s two-run double gave the Nationals a 4-2 lead, and by the time Doolittle took the mound to start the ninth the score was 8-2. Doolittle’s first home appearance with his new team was a roller-coaster ride — he gave up three runs, all earned, and three hits, including a homer — but the 6-2 left-hander eventually struck out the side to secure the victory for the Nationals.

The next afternoon, Zimmerman belted his 21st and 22nd home runs of the season to help Washington take the series with a 15-2 rout of the Brewers. He’s since hit two more home runs, bringing his season total to 24 and counting.

The Nationals, whose bullpen has struggled this season, added one of the game’s better relievers in Doolittle.

“We’re thrilled to have him here to help us try to close out games,” Zimmerman said, “and he’s obviously a great teammate and a great guy, so it’s fun to play with him again.”

Zimmerman, who’s married, with two children, has enjoyed catching up with Doolittle, who moved to D.C. with his fiancée.

“Obviously 12 years ago is a long time, and we’ve both changed quite a bit since we played together [at UVA],” Zimmerman said. “But as far as the type of person and teammate and competitor he is, that seems the same, and I’m looking forward to playing with him, obviously this year, but hopefully for the next few years.”

A Year We Will Never Forget: 2019-20 in Review END_OF_DOCUMENT_TOKEN_TO_BE_REPLACED

‘What Will You Carry With You?’ Remarks From UVA President Jim Ryan END_OF_DOCUMENT_TOKEN_TO_BE_REPLACED