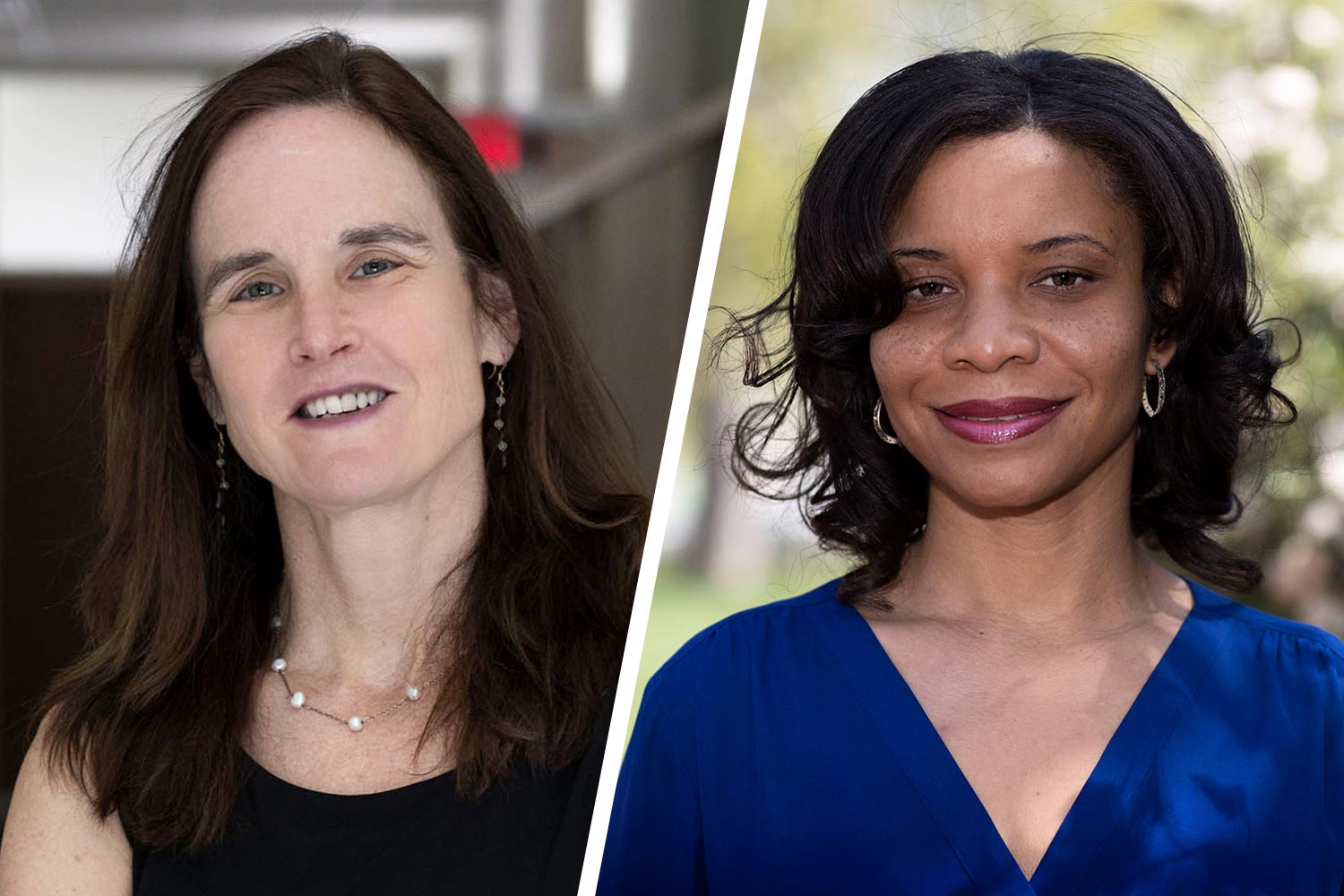 The pair are among 31 distinguished scholars and writers selected by the Carnegie Corporation of New York, a philanthropic foundation. The foundation will fund their research projects up to $200,000, supporting a sabbatical focused on their studies in the social sciences and humanities. They were selected from a pool of 300 nominees.

Hale, Commonwealth Professor of American Studies and History in the Corcoran Department of History, has proposed revisiting and updating the subject of her first book, which she wrote nearly 20 years ago.

“My first book, ‘Making Whiteness: The Culture of Segregation in the South,’ is the now-classic account of how white Southerners created Confederate organizations and memorials, Lost Cause histories, facilities marked ‘white’ and ‘colored,’ and the practice I named ‘spectacle lynchings’ to build and legitimate their segregated ‘New’ South,” Hale said in her proposal.

“In the public ‘debut’ of the extreme right in Charlottesville last August and the controversies over Confederate monuments and other memorials to defenders of slavery and segregation, false narratives of Southern history have yet again become a resource for white supremacists. Drawing on interviews, site visits, archival research and my family’s history, my project reveals how these statues and stories, present in American public landscapes and popular memory, nurture racism and limit U.S. democracy today.”

Her proposed book, “The Lyncher in the Family: Reckoning with the Southern Past,” draws on some of her family history as well as Southern history to examine race relations in the South.

Hale teaches courses in U.S. cultural history, the history of the U.S. South, documentary studies and popular music. She is the author of “A Nation of Outsiders: How the White Middle Class Fell in Love With Rebellion in Postwar America,” and “Cool Town: Athens, Georgia and the Promise of Alternative Culture in Reagan’s America,” due to be released later this year.

She is the founder and senior editor of the University of North Carolina Press Book Series “Studies in U.S. Culture,” and a member of the editorial board of “Southern Spaces: A Journal of the South.” She is co-director, with Lauren Tilton of the University of Richmond, of the National Endowment of the Humanities-funded digital humanities project “Participatory Media” and a collaborator in the University of Georgia’s “Athens Music Project,” interviewing participants in the Athens music and art scene for an oral history archive based in the Special Collections Library at University of Georgia.

She also writes regularly about the history of photography in relation to the U.S. South for “Southern Cultures.”

“The history department was ecstatic to hear the news of Grace’s Carnegie Fellowship,” said department chair Karen V.H. Parshall, Commonwealth Professor of History and Mathematics. “Her project, ‘The Lyncher in the Family: Reckoning with the Southern Past,’ represents a brave undertaking – the historian confronting her family’s own past – but she will bring the skills and talents of one of the country’s finest Southern historians to the task.”

Talitha LeFlouria Investigates Why So Many Black Women Are Imprisoned

LeFlouria, the Lisa Smith Discovery Associate Professor in African and African-American Studies in UVA’s Carter G. Woodson Institute, published her first book, “Chained in Silence: Black Women and Convict Labor in the New South,” three years ago. It netted a half-dozen awards, including the Darlene Clark Hine Award from the Organization of American Historians in 2016.

With her two-year Carnegie Fellowship, LeFlouria will complete research for her next book that will shed light on the stories of incarcerated black women and on this unspoken epidemic. She intends to write this book, to be published by Beacon Press, for a popular audience, making it the first of its kind to concentrate on women and creating a broad reach for readers.

“Thousands of black women are imprisoned all over the United States for self-defense or drug-related offenses,” LeFlouria said. “Sentencing disparities for allegedly committing violent and non-violent crimes have made African-American women three times more likely to go to prison than white women. During the peak of the War on Drugs, from the 1980s through 1990s, these numbers were even higher – a rate of six to one.”

In general, the U.S. has less than 5 percent of the world’s women, yet it houses one-third of the world’s incarcerated women – the majority of whom are black.

“When I received word that Talitha had been awarded the Carnegie Fellowship, I was simply thrilled,” Deborah McDowell, director and chair of the Woodson Institute, said. “Talitha is one of the foremost historians of her generation, working at the intersection of multiple fields and subfields: African-American history, African-American women’s history, labor history, Southern history, carceral studies and modern slavery studies.”

In addition to undertaking archival research, LeFlouria also plans to further interview incarcerated women at several prisons in Virginia, Indiana, Michigan, Maryland and Washington, D.C. LeFlouria said she will look at the legacy that began in the post-Civil War South and arrive at the present “in the modern-day cell block where structural racism, systemic discrimination and infinite exclusion coalesce into keeping black women contained.”

LeFlouria is a member of the board of directors for Historians Against Slavery and the Association of Black Women Historians. She also serves on the editorial boards of the Georgia Historical Quarterly and the journal International Labor and Working-Class History.

It’s Copperhead Season in Virginia. Here Is What You Need to Know END_OF_DOCUMENT_TOKEN_TO_BE_REPLACED

What’s Next for UVA’s Class of 2022? END_OF_DOCUMENT_TOKEN_TO_BE_REPLACED