Virginia’s Population Growth Slow, But Still Ahead of National Rate 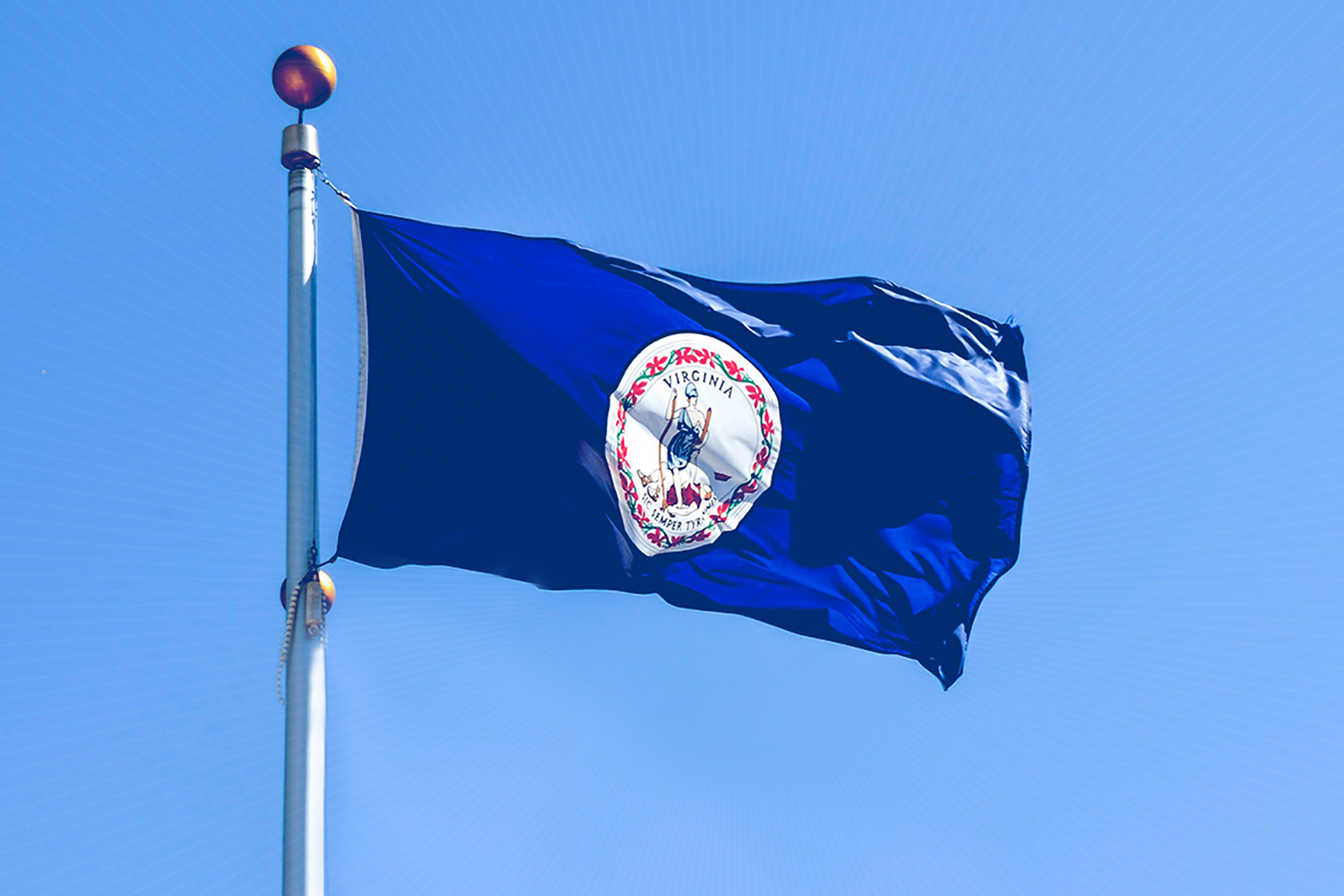 Virginia’s population growth has steadily slowed since the 2010 census, with 90 percent of growth concentrated in its three largest metropolitan areas, according to University of Virginia demographers.

Since the 2010 census, Virginia grew by 5.1 percent, reaching an estimated 8.4 million residents on July 1, 2016. The commonwealth grew faster than the nation as a whole, which grew by 4.7 percent in the same period.  Compared to other states, Virginia was the 19th-fastest growing state and had the ninth-largest numerical population gain.

In recent years, Virginia’s population growth has slowed significantly, matching national and regional trends. Fewer people moving into Virginia has contributed to the slower pace of growth. For the past three years, more people have moved from Virginia to other states than have moved into the commonwealth.

“Though the federal budget sequestration has likely contributed to the slow growth, most mid-Atlantic and Northeastern states have also experienced a rise in out-migration as more of the baby boomers reach retirement age,” said Hamilton Lombard, a research associate who prepared the population estimates. “Popular retirement states, such as Florida and South Carolina, have seen their population growth accelerate in recent years.”

Within Virginia, population gains have been concentrated in the Northern Virginia, Richmond and Hampton Roads metropolitan areas. Northern Virginia alone has accounted for more than 60 percent of the commonwealth’s growth during the past six years. 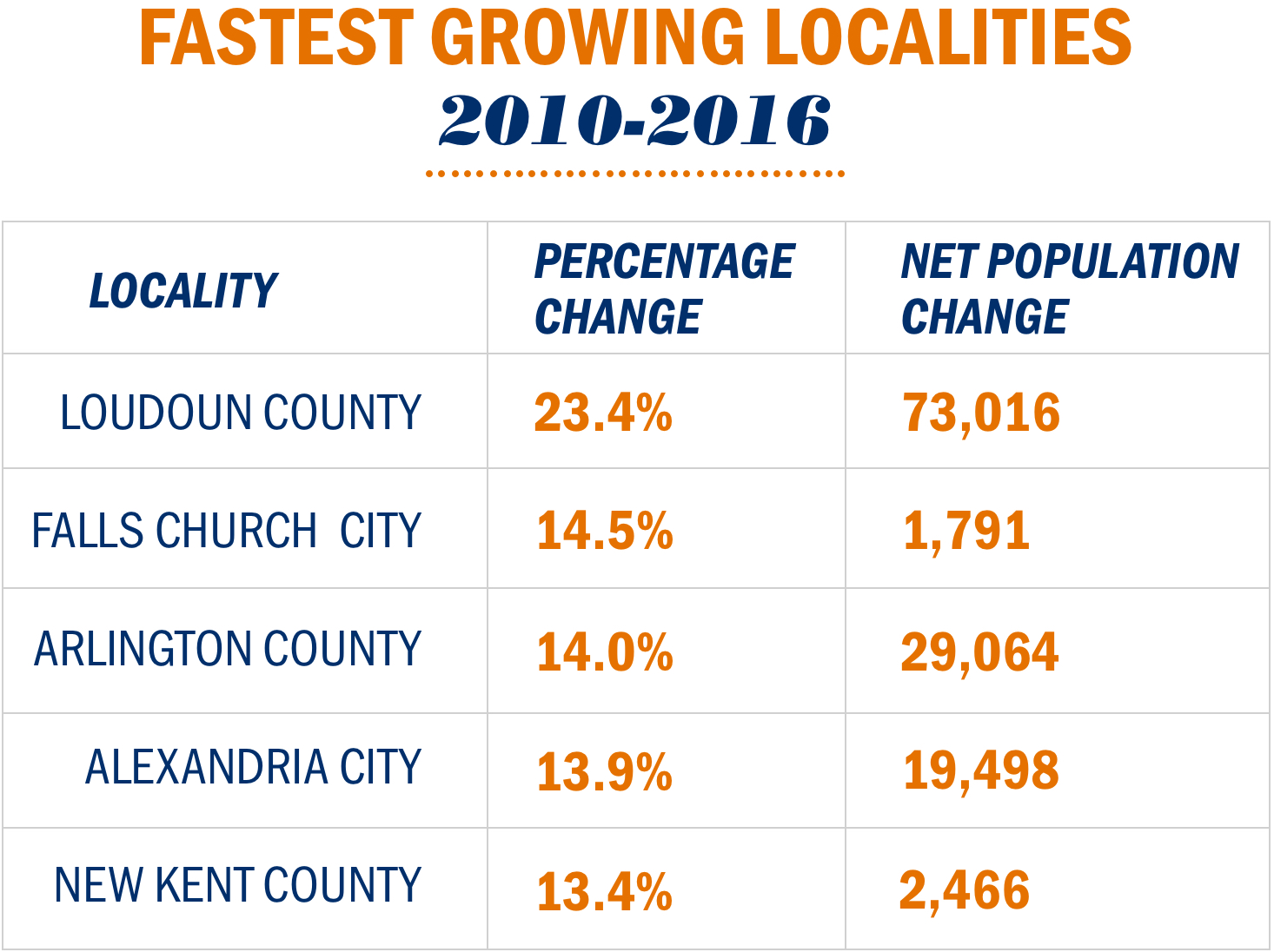 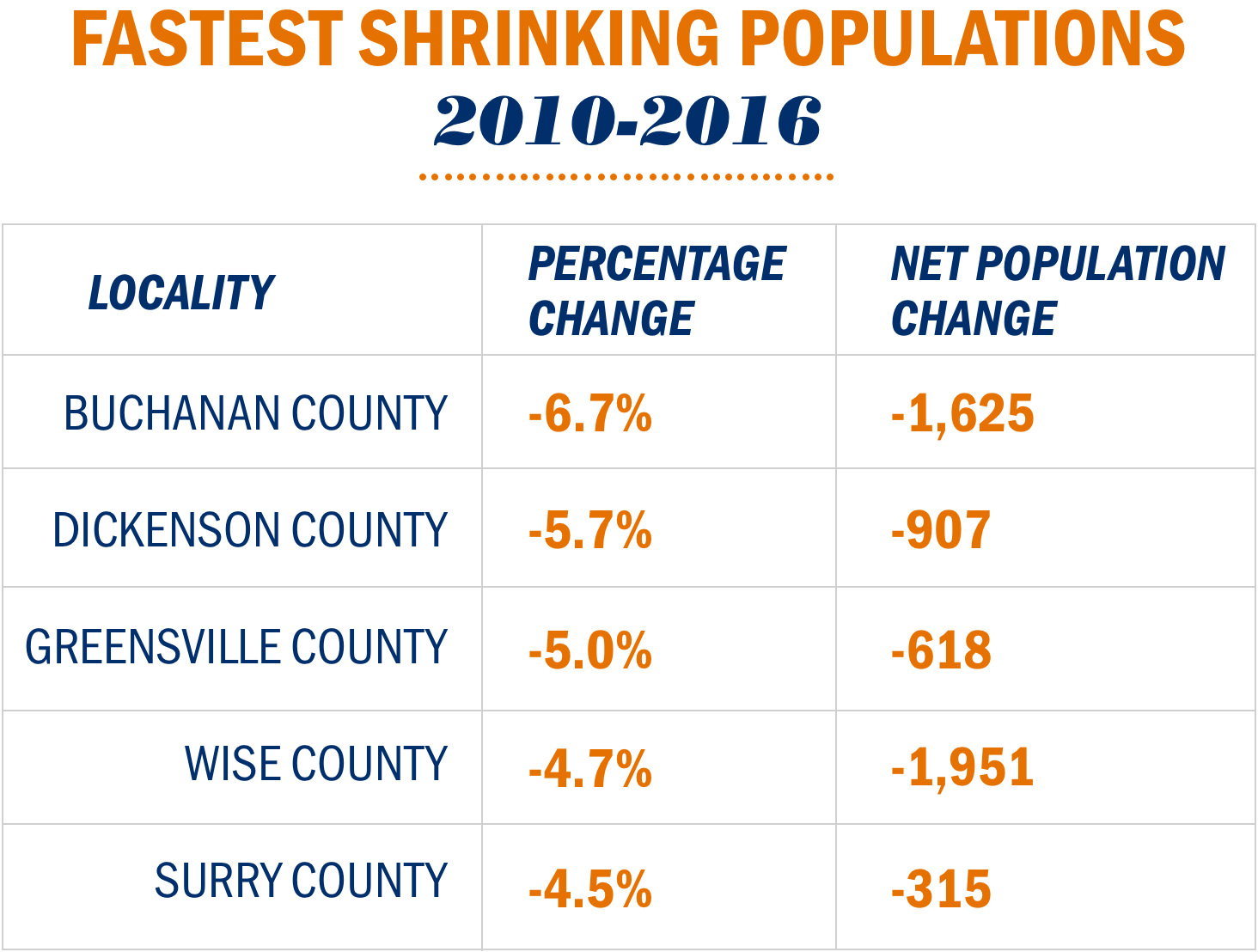 “The trend toward population growth in Virginia’s urban areas, while many of its rural communities’ populations decline, is not new,” said Qian Cai, director of the center’s Demographics Research Group. “However, the deepening polarization of these demographic trends present growing problems for the commonwealth in terms of schools, housing, transportation, workforce and health care. Localities and regions will need to understand the trends in their community’s population and make informed, practical policy decisions to address these demographic changes.”

The Cooper Center’s population estimates are the official figures for the Commonwealth of Virginia. The estimates are based on changes since 2010 in housing stock, school enrollment, births, deaths and driver’s licenses. They are used by state and local government agencies in revenue-sharing, funding allocations, and planning and budgeting purposes.

To find your locality and view all of the 2016 population estimates for Virginia’s counties and cities, click here.

A Year We Will Never Forget: 2019-20 in Review END_OF_DOCUMENT_TOKEN_TO_BE_REPLACED

‘What Will You Carry With You?’ Remarks From UVA President Jim Ryan END_OF_DOCUMENT_TOKEN_TO_BE_REPLACED