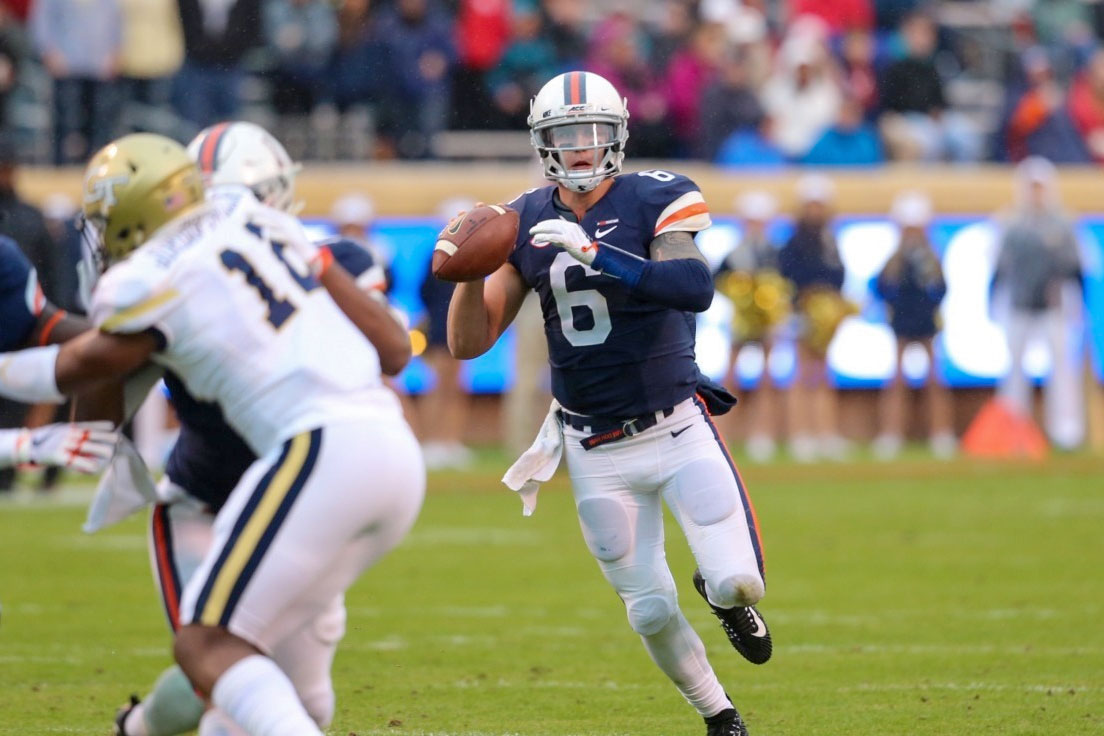 His family’s home in Baltimore County is about 35 miles from the United States Naval Academy in Annapolis, and as a Gilman School linebacker Micah Kiser played twice at Navy-Marine Corps Memorial Stadium in Maryland’s capital city.

Kiser, of course, is now a fifth-year senior on the University of Virginia football team, where his classmates include wide receiver Andre Levrone, who grew up in Laurel, Maryland, about 25 miles from Annapolis.

Levrone played at Navy-Marine Corps Memorial Stadium several times during his career at Our Lady of Good Counsel High School and, like Kiser, returned an interception for a touchdown in a game at that historic venue. It’s no surprise, then, that they were thrilled to learn UVA (6-6) would meet Navy (6-5) in the Military Bowl, Dec. 28 in Annapolis.

“I’m excited to have an opportunity to end my career in a stadium I’m used to playing in,” Levrone said Monday at the McCue Center.

“It’s going to be awesome,” Kiser said from New York City, where he was scheduled to attend the National Football Foundation’s annual awards banquet Tuesday night.

“I’ve got a lot of family members asking about tickets,” said Kiser, a finalist for the Campbell Trophy, also known as the ‘Academic Heisman.’ “Aunts and uncles that have never been able to go to [other UVA] games want to go to this one.”

Levrone is in a similar situation. “My phone’s been kind of flooded in the last 24 hours,” he said, smiling.

That’s a small price to pay, they know, for landing in a bowl that was the preferred destination of many connected to the program, as well as thousands of UVA alumni and fans who live in the Washington and Baltimore metropolitan areas. A strong turnout is expected at 34,000-seat Navy-Marine Corps Memorial Stadium. (Ticket information.)

“Of the different [bowl] opportunities, it was really the one from the very beginning that gained the most traction,” UVA head coach Bronco Mendenhall said. “It just seemed to blend everything that made a lot of sense together.”

This is Mendenhall’s second season with the Wahoos, who finished 2-10 in 2016. That marked the first time in his 12 years as a head coach that Mendenhall did not get to prepare his team for a bowl game.

Staying home last year “was very foreign, and it was very humbling,” Mendenhall said. “It provided a lot of introspection and I think a lot of searching as to what now with this program will be needed to reach a similar, if not better, result than what I’ve had in the past.

“I wouldn’t want to do it again, but last year was just a stark and brutal reality of where we were.”

This will be the Cavaliers’ first postseason appearance since 2011, when they lost to Auburn in the Chick-fil-A Bowl in Atlanta. Kiser and senior safety Quin Blanding put their NFL career dreams on hold after last season and chose to return to UVA in part because they wanted to be part of such a turnaround. They have not been disappointed.

The Cavaliers aren’t satisfied. A victory over Navy would give UVA its first winning season since 2011.

Moreover, Mendenhall said, a season-ending win would propel his program “into the offseason, which then carries over into the spring and the summer. It matters, your last performance, bowl game-wise. It’s one thing to qualify. It’s a whole different thing to perform well and win the game. I’ve learned that over a number of years, and it makes a huge impact in the offseason.

“It doesn’t determine the next season’s outcome, but it certainly provides momentum.”

For Navy, which closes the regular season Saturday against Army in Philadelphia, the bowl will essentially be another home game. That adds to the Cavaliers’ challenge, Mendenhall said, but that’s fine with him.

“It’s just the next cool thing and hard thing to take on in this journey at Virginia,” he said. “It just lines up perfectly. We don’t expect anything to be easy, so it’s just so fitting.”

The ties between these programs are substantial. Virginia and Navy first met in football in 1899, and they played each other regularly in the 1970s, 1980s and early 1990s. The winningest coach in UVA history, George Welsh, came to Charlottesville from Navy, his alma mater, and brought most of his staff with him.

“He’s the ideal in terms of behavior, work ethic, discipline, kindness, unselfishness,” Mendenhall said of Va’a, “and if you know his parents, they’re amazing people.”

The elder Niumatalolo, Mendenhall said, represents “all that’s right with college football, in my opinion, and runs a class program and represents the values that I think are great for the game.”

Mendenhall is “a phenomenal football coach, but he’s an even better person,” Niumatalolo said. “As a dad, I was very appreciative and glad my son got to play for somebody like Bronco.”

Like one of his mentors, former Navy head coach Paul Johnson, who’s now at Georgia Tech, Niumatalolo has had great success running the triple option on offense. Led by quarterback Zach Abey, against whom Kiser played in high school, the Midshipmen are averaging 30.4 points per game this season. Abey has rushed for 1,322 yards in 10 games.

Virginia knocked off Georgia Tech 40-36 at Scott Stadium early last month. The work UVA put in preparing for the Yellow Jackets should pay dividends in the Military Bowl, but Mendenhall, also his team’s defensive coordinator, noted that Navy’s coaches will benefit from that game, too.

“Navy has seen us defend the option,” Mendenhall said. “There’s some familiarity on both sides now. Where we go from there, that’s kind of the coaching part of the game.”

Georgia Tech’s and Navy’s attacks share core similarities, Mendenhall said, “but if you watched both offenses side by side ... you’d easily recognize differences, and it wouldn’t take really a trained eye to notice that. We’ll be defending literally a different offense.”

The ’Hoos haven’t played since Nov. 24, when they closed the regular season with a 10-0 loss to then-No. 24 Virginia Tech at Scott Stadium. The Hokies’ defense controlled the line of scrimmage and held UVA to a season-low 191 yards in that game.

“Obviously, it doesn’t feel any good when you can’t put any points on the board,” Levrone said. “We weren’t able to really move the ball effectively, either.

“That’s not an outing that we were proud of. That’s not how we prepare. That’s not the product we want to put on the field as an offense, and we’re just excited to get right back to work so we can go out there and show what we’re truly capable of.”

Redshirt junior center Jake Fieler said the offensive line is eager to redeem itself for that performance.

“That was a lot our fault,” Fieler said. “We drive the offense. If we play well, then the offense is going to play well, obviously. That put a bad taste in our mouth. We don’t want to end on that.”

The key, UVA quarterback Kurt Benkert said Monday, is for the offense to have an “aggressive mindset. I think we played kind of passive in the last game. We were waiting around for people to make plays, and we can’t play like that.”

A graduate student who began his college career at East Carolina University, Benkert is the only player on the UVA roster to have played in a bowl game. He took a couple of snaps on Jan. 3, 2015, in ECU’s 28-20 loss to Florida in the Birmingham Bowl.

He spent part of his childhood in Florida, but Benkert was born in Baltimore and spent the ninth and 10th grades at Loyola Blakefield in nearby Towson.

Benkert, who still has relatives in the Baltimore area, said he’s never been to Annapolis. Neither has Mendenhall, who’s looking forward to the trip.

Mendenhall said he’s a fan of “programs where young people go for some purpose besides just football. I loved that at Brigham Young, because the kids were faith-based, and there was some other reason they were attending, in addition to football. I love the idea of Army and Navy and Air Force. Those kids, they’re playing like crazy and they’re tough and they’re physical. And then they have this rigor academically, and then they serve [in the military].

“It’s ideal college football to me. I really like it, so I’m anxious to see what it looks like.”

Mendenhall plans to watch the Army-Navy game on Saturday, and his players will follow suit.

“It’s an opportunity that a lot of teams don’t get,” Levrone said, “to watch a team live before you play them in the bowl game.”

A Year We Will Never Forget: 2019-20 in Review END_OF_DOCUMENT_TOKEN_TO_BE_REPLACED

‘What Will You Carry With You?’ Remarks From UVA President Jim Ryan END_OF_DOCUMENT_TOKEN_TO_BE_REPLACED