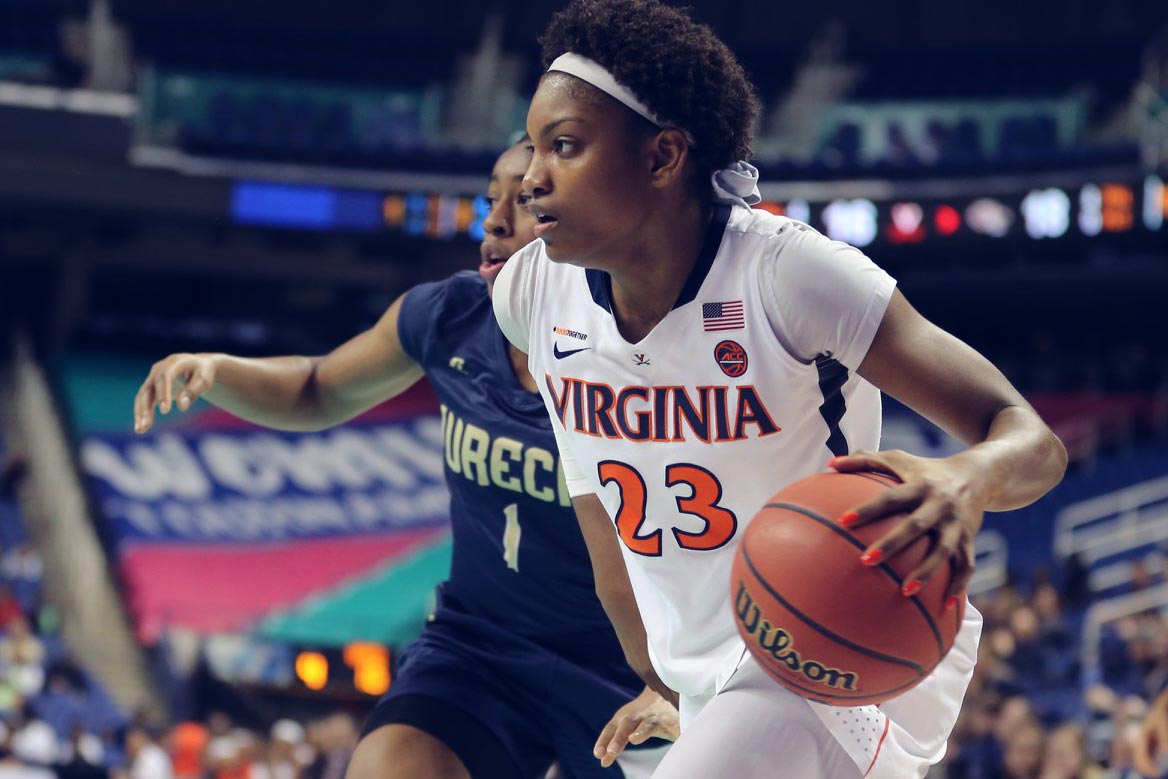 Senior Alyah Huland El said the Cavaliers aren’t content just to be invited. “We want to make a statement, to show that we’re here and we’re here to stay,” she said. (Photo by Jim Daves, UVA Athletics)

For the University of Virginia women’s basketball team, the season started with a 15-point loss at Mississippi State University.

More setbacks followed. Eight games into the season, UVA’s record stood at 3-5. Ten games in, the Cavaliers were 4-6, a sobering start for a team with a stated goal of making the NCAA Tournament.

Throughout that stretch of non-conference games, however, UVA’s players continued to practice hard and remained confident they could turn their season around. And that they did, winning eight of their first nine ACC games.

“Never once did they ever hang their heads and say, ‘This isn’t going to happen,’” head coach Joanne Boyle recalled.

The Wahoos saw their perseverance rewarded Monday night. For the first time since 2010, UVA (18-13) is headed to the NCAA tournament.

“I’m just really proud of the team for all the time and effort and belief in each other that they’ve put forth this year,” said Boyle, who’s in her seventh season at UVA.

The Cavaliers gathered Monday night at a local restaurant to watch the selection show on ESPN. Athletics director Carla Williams, who played in multiple NCAA tournaments as an undergraduate at Georgia, was there with her family, and the mood was festive.

A year ago, the ’Hoos experienced heartbreak on Selection Monday when they narrowly missed making the NCAAs. Bolstered by a formidable strength of schedule and a solid RPI, they were more confident heading into this year’s selection show.

“We were told we had to improve our non-conference schedule,” Boyle said. “So following suit with what the [NCAA selection] committee suggested we do, I felt like we did a really good job at that.”

The Cavaliers did not have to wait long for good news Monday night. The show started at 7 o’clock. At 7:07, ESPN unveiled the UVA-Cal matchup, and the celebration began. The players, who were sitting together at a table, leaped to their feet and screamed with joy, then shared embraces with Boyle and assistant coaches Tim Taylor, La’Keshia Frett Meredith and Katherine Graham.

Later during the show, Ron Sanchez, associate head coach of the UVA men’s team, stopped by to offer congratulations.

“Last year we were heartbroken,” said guard Aliyah Huland El, the Cavaliers’ second-leading scorer. “We were absolutely expecting to have our name called, and I think we used that as motivation in the offseason and preseason and [in the WNIT] last year as well.

“This year it came to fruition. We worked for it, we deserved it, and we’re so excited to be dancing this year.”

Huland El is one of four seniors on the roster, along with guard J’Kyra Brown and forwards Lauren Moses and Jae’Lisa Allen.

“I don’t know even if there’s words to describe the feeling I felt,” Moses said, “for not only me, being a fourth-year, but for this entire team.”

Huland El said: “The fourth-years on this team have been working for this for four years now. We came in wanting to change the program, and time and time again we’ve been so disappointed, and this year it came to fruition.”

This marks the first time since 2001 that UVA will be represented in both the men’s and women’s NCAA tournaments. The men’s head coach, Tony Bennett, was at the Boar’s Head Resort for his weekly radio show when he learned the women had been selected.

“Congrats to them,” Bennett said. “They should have been in last year.”

Moments after the UVA-Cal game was announced, Boyle received a text from Lindsay Gottlieb.

After Boyle left for UVA in 2011, Gottlieb took over as the Golden Bears’ head coach. She’d previously been an assistant under Boyle at the University of Richmond and at Cal.

“She’s one of my best friends,” Boyle said.

If the Cavaliers win Friday, ESPN figures to have more fun in the second round. South Carolina’s head coach is Dawn Staley, the greatest player in the history of UVA women’s basketball.

During the regular season, Virginia faced three of the teams that were awarded No. 1 seeds in the NCAA Tournament: Mississippi State, Notre Dame (twice) and Louisville (twice). Boyle hopes those experiences will help prepare the Cavaliers for what awaits them in the postseason.

Boyle said she wants her players to “go in with confidence and knowing that they have a good body of work, and they’ve been one of the best defensive teams in this conference.”

After taking a couple of days off early last week, the ’Hoos reconvened Thursday at John Pual Jones Arena to resume preparations.

“I came in here with a mission to turn this program around and to get this my senior year is just an amazing feeling,” Moses said, “but I know we’re not done here and that we have a long road to go. We’re just going to take it day-by-day – one practice at a time, one game at a time.”

The Cavaliers have made four WNIT appearances under Boyle, who as a head coach has been to the NCAA tournament five times: once with Richmond and four times with Cal.

She’s thrilled to be back in the NCAAs, Boyle said Monday night, but it’s “not about me. It’s about the team and the hard work that they’re putting in. ... The goal in this program has been: Let’s get this program back to where it used to be. And I know it’s not there yet, but [an important step is] being able to lay that foundation and getting it into the tournament and knowing what that feels like, and then being able to build off of that.

“I’m just so happy for this team that has worked so hard and committed to putting the team first before any individual goals, and just working hard to dream big and understand that they know that they came here for a reason,” Boyle said.

“It’s a great academic school, but we wanted to make some noise in the basketball world as well.”