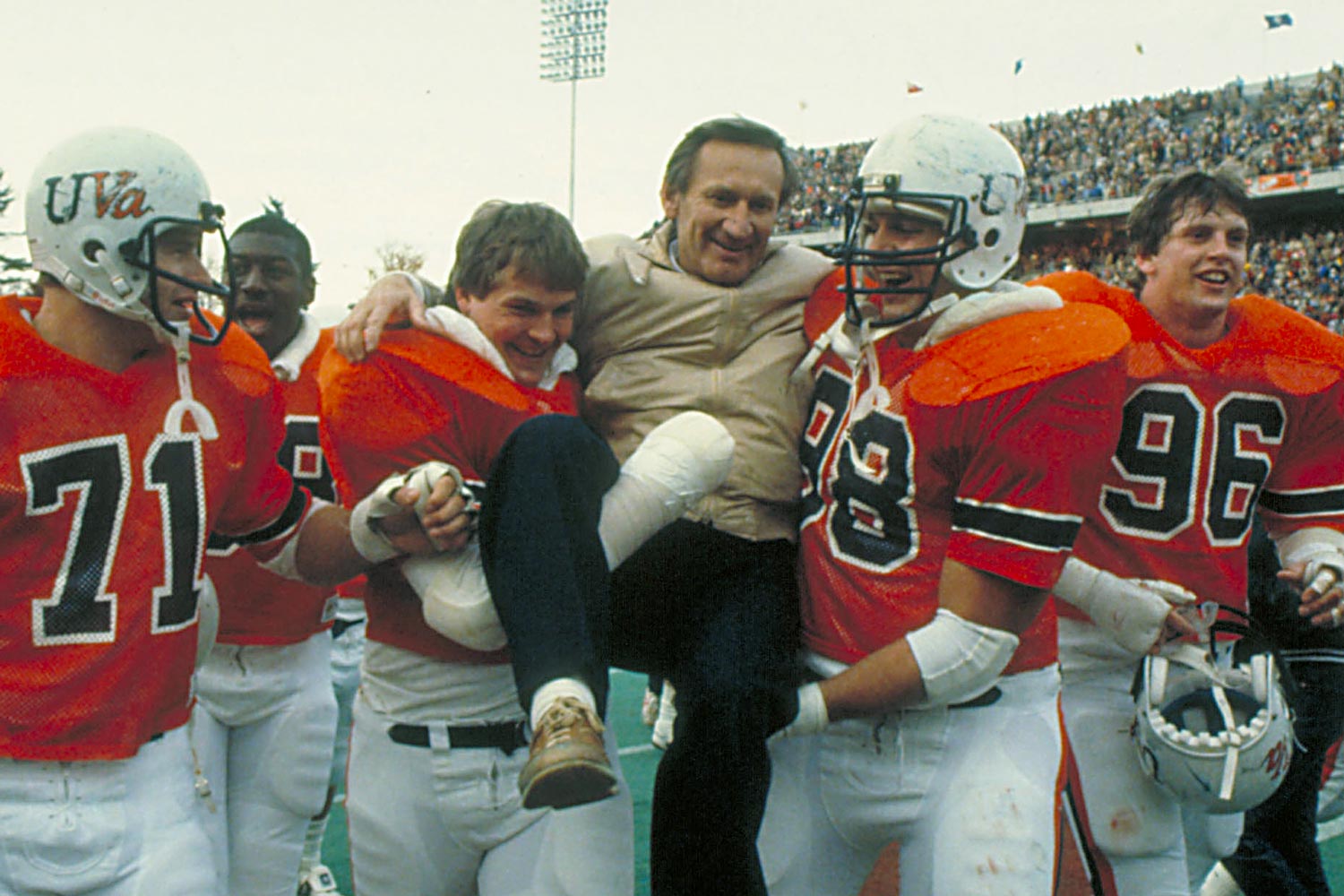 In the town where he spent his college years, in the historic stadium where he coached in so many memorable games, the two football programs with which he’s most closely associated will meet Dec. 28 in the Military Bowl.

But George Welsh will not be in Annapolis, Maryland, to see the University of Virginia (6-6) take on the U.S. Naval Academy (6-6).

Welsh, 84, had a hip replaced late last month. He’s still recovering from surgery and won’t be able to attend the game at Navy-Marine Corps Memorial Stadium.

“I regret that,” Welsh said earlier this month from his home in Charlottesville. “It’s too much of a risk, though I’d love to go. I think it would be a lot of fun.”

Welsh, who was inducted into the College Football Hall of Fame in 2004, is a legend at both schools. Each was an afterthought in football when he took over as its head coach.

In February 1973, after 10 seasons as a Penn State assistant, Welsh was named head coach at Navy, where in the 1950s he’d starred at quarterback. (He finished third in the Heisman Trophy balloting as a senior in 1955). The Midshipmen had finished with a losing record in eight of the previous 10 seasons, but Welsh soon returned them to prominence.

In nine seasons leading Navy, Welsh posted a 55-46-1 record, with three bowl appearances. The Midshipmen went 31-15-1 in their final four seasons under Welsh, who left for UVA in December 1981.

It's almost impossible to overstate the challenge Welsh took on in Charlottesville. From 1953 to 1981, the Cavaliers had finished above .500 only twice.

Welsh quickly reversed their fortunes. In his 19 seasons, UVA finished with a winning record 17 times. His tenure included a stretch of 13 consecutive seasons in which the Wahoos won at least seven games – and that was during an era when teams typically played 11 regular-season games, not 12.

Because of health issues, Welsh hasn’t been around the McCue Center as much this fall as in recent seasons, but he still uses “we” when discussing the Cavaliers, and he follows them with interest. The ’Hoos are in their second season under head coach Bronco Mendenhall.

“I think he’s done a really good job,” Welsh said of Mendenhall, who came to UVA from Brigham Young University in December 2015.

The Cavaliers won five of their first six games this season before suffering one-sided losses to Boston College and Pittsburgh. But the ’Hoos steadied themselves on Nov. 4 and rallied for a 40-36 win over Georgia Tech at Scott Stadium, a result that made them bowl-eligible for the first time since 2011.

“I thought that was quite a mental accomplishment,” Welsh said.

Mendenhall, whose team often trains in the George Welsh Indoor Practice Facility, is well aware of Welsh’s legacy at UVA.

When Welsh left Navy in December 1981, most of his assistants followed him to Charlottesville. Similarly, Mendenhall brought most of his staff from BYU with him to UVA.

In Welsh’s first season at Virginia, his team finished 2-9. Mendenhall’s first team at UVA went 2-10. In each case, the Cavaliers showed dramatic improvement in year two.

“I consider it a privilege to be following a similar path,” Mendenhall said this month.

Navy is in its 11th season under head coach Ken Niumatalolo, whose son Va’a played linebacker for Mendenhall at BYU. During the 2014 season, Niumatalolo broke Welsh’s record for coaching victories at Navy, and his record there now stands at 83-48.

That Virginia and Navy ended up in the same bowl did not surprise Welsh.

“I could see it coming,” he said. “Somebody told me that was probably going to be in the cards. I think it’ll be a good game.”

This will be the 10th bowl appearance for the Midshipmen under Niumatalolo. UVA, by contrast, has played in only two bowls since the end of the 2005 season: the Gator in 2007 and the Chick-fil-A in 2011.

Welsh, who has never met Niumatalolo, said he hasn’t been back to Annapolis in nearly a decade. He was there in 2008 for a reunion of the Navy team that in 1978 edged BYU 23-16 in the Holiday Bowl. That was the Midshipmen’s first bowl appearance in 14 years.

UVA and Navy haven’t played each other in football since 1994. Welsh has been on both sides of this series. As Navy’s head coach, he was 4-1 against the Cavaliers. At UVA, Welsh posted a 7-3 record against the Midshipmen.

As for the Dec. 28 game, Welsh said, “I had some great years [at Navy] and it’s my alma mater, but I don’t have a favorite. I would say this: Niumatalolo can lose that game and not have a big problem. He’s very well-established and has won a lot of games and has beaten Army so much.”

A UVA victory would accelerate Mendenhall’s building project, Welsh said. “It would help Virginia if they can win, help them recruit. I think that would be one difference.”

A Year We Will Never Forget: 2019-20 in Review END_OF_DOCUMENT_TOKEN_TO_BE_REPLACED

‘What Will You Carry With You?’ Remarks From UVA President Jim Ryan END_OF_DOCUMENT_TOKEN_TO_BE_REPLACED