What Did You Do for Spring Break? This UVA a Capella Group Sang at The Great Wall 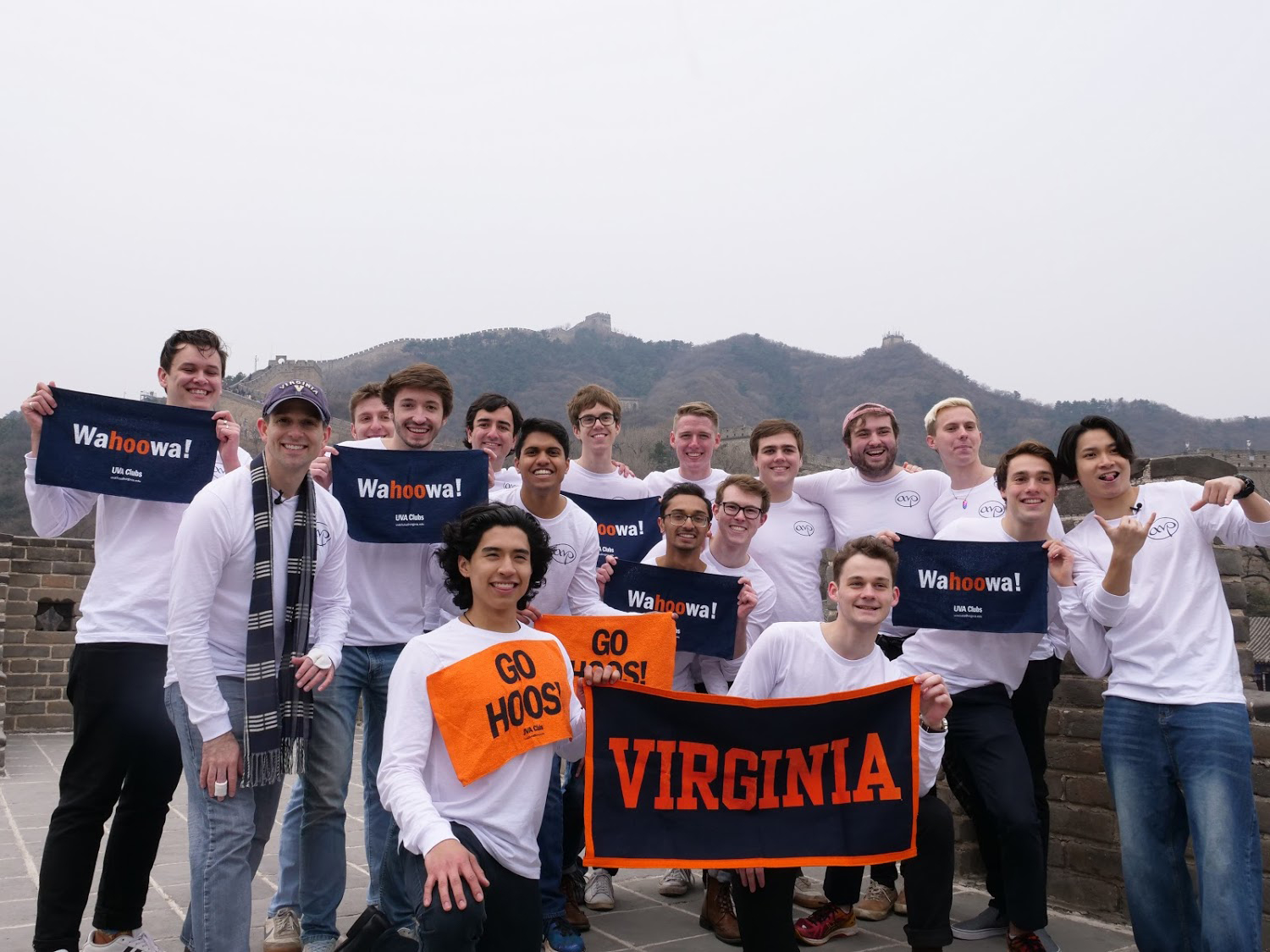 The University of Virginia’s spring break ended Monday. While thousands of students participated in UVA’s service-oriented Alternative Spring Break, hit the beaches or visited with family, a clutch of crooners headed to China for a whirlwind singing tour capped by a performance at the Great Wall, the world’s largest military structure.

The humorously named Academical Village People headed east for a capella performances in Beijing, Shanghai and Guangzhou from March 8 to 17, performing at high schools and universities, on Chinese national television and at the U.S. consulate in Guangzhou. 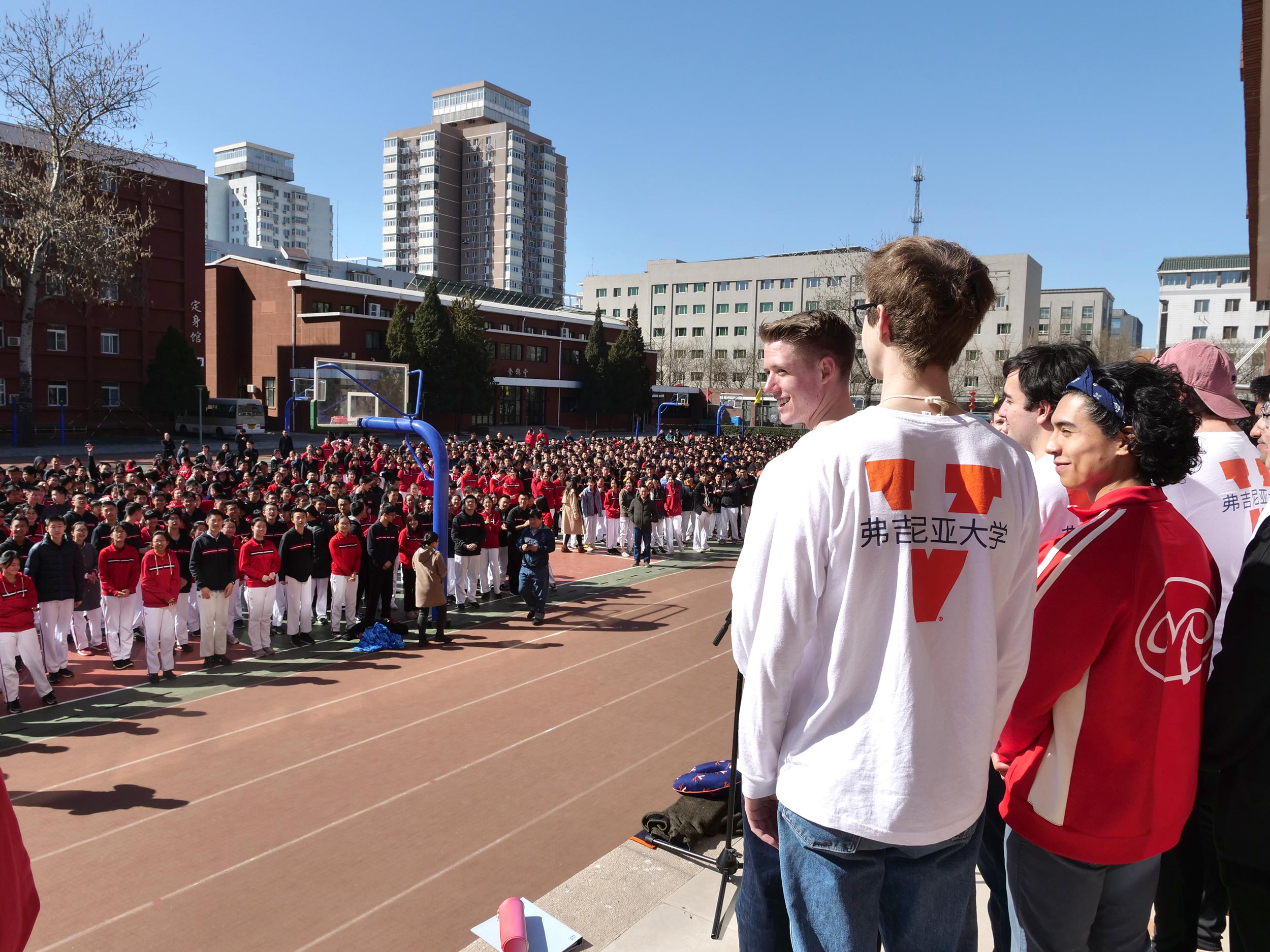 Their journey began almost exactly one year ago, when an Academical Village People alumnus named Mike Ludwick returned to Grounds for the March 17 celebration of the singing troupe’s 25th anniversary. Ludwick has lived in China for years and has become a well-known television star there, singing on several talent shows, annual galas and television dramas.

He told the current members, “You guys should come over. If you come to China, I’ll, like, plan a tour for all of you,” said Myles Stremick, a former president of Academical Village People, or “AVP” for short.

“We’re like, ‘OK, there is no way we will actually go to China, but if we do, like, great. Thanks, Mike,’” said Stremick, who has a funny flair for the dramatic.

But Kiran Menon’s ears perked up. As AVP’s determined business manager, he went to UVA’s vice provost for global affairs, Stephen Mull, to see how the singers could pull off the China trip.

“I ended up striking gold with the support from the vice provost, Steven Mull,” he said. Before he knew it, Mull had kicked in some support, as had the Parents Fund and Air China. And before they knew it, 15 members of AVP were packing their bags and heading for their first destination: Beijing.

In all, Stremick estimates the all-male group gave about 15 formal performances in China. One, of course, was at the Great Wall.

It was there the singers joined Ludwick to perform for a documentary about Ludwick that Chinese television conglomerate CCTV was filming. They performed just three songs, but the taping took an hour.

“The TV crew needed to get a ton of different angles, so we would have to do it once, and then we would have to move and do it again,” Stremick said. They sang “Lost in Japan,” by Shawn Mendes and Zedd; “If You Leave Me Now,” by Charlie Puth and Boys to Men; and “Kiss Goodbye,” by a Chinese artist named Wang Leehom.

There were also several impromptu performances, one of which Menon remembers with great fondness. “I think the moment I will remember most is when we went to this public park that was near the Temple of Heaven” in central Beijing, he said. There were about 100 elderly Chinese men, and in a funny moment the singers decided to challenge them to do push-ups and sit-ups.

“It was a bunch of 70-year-old-guys just absolutely schooling us,” Menon laughed. “They went up to about 75 push-ups and the most we got was about 50.”

“This crowd kind of formed around us and as soon as we went into the lyrics, everyone kind of started singing along and there were a couple of people tearing up and getting emotional,” Menon recalled.

“I think that’s the moment that I’ll remember the most, about how meaningful it was to see from the Chinese perspective to see Westerners engaging in in their culture in a way that really I guess most of them had never seen before,” he said.

The group also visited Tsinghua University, where there is a rotunda believed to have been designed by Yan Huiqing, UVA’s first Chinese graduate.

[Read all about the back story on the “Chinese Rotunda” here.]

“These guys are outstanding representatives of the very best of UVA – talented, disciplined and engaged, all with a healthy dose of good-natured fun,” Mull said. “Their travel around China won the hearts of all who watched them perform and they did a terrific job in boosting our global profile.”

Stremick and Menon said they are incredibly grateful for the support they received from the University.

“The trip was just incredible,” Menon said. “If there is any way to convey a ‘thank you’ to everyone involved, that would great, because we definitely would not have been able to do this without help.”

In all, it was an action-packed visit. Singer Zach Liga was so pooped when he got back to UVA that he slept for 20 hours straight.

A Year We Will Never Forget: 2019-20 in Review END_OF_DOCUMENT_TOKEN_TO_BE_REPLACED

‘What Will You Carry With You?’ Remarks From UVA President Jim Ryan END_OF_DOCUMENT_TOKEN_TO_BE_REPLACED