What UVa. People Do When They Celebrate the Humanities 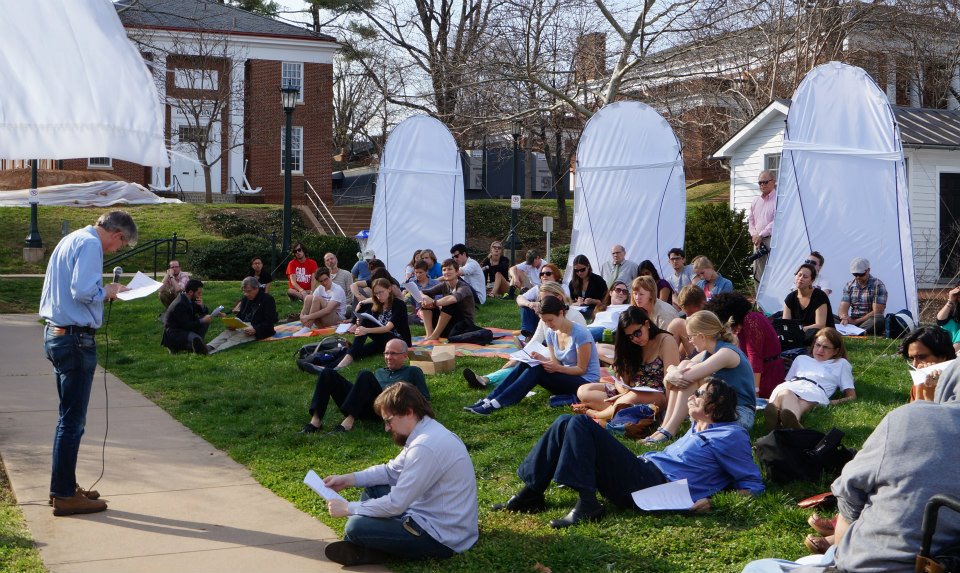 UPDATED April 17 to correction the spelling of the name of the English professor who organized the program on “emergency poetry” to Clare Kinney; and further extended and clarified information about the “emergency poetry” session.

As if to usher in the spring, Humanities Week at the University of Virginia, held April 8 through 12, featured events held outside under warm, breezy skies, with U.Va. poets and professors sharing their work and the poetry that sustains them; students putting on scenes from plays; photos and experimental films showing on large screens at night; and speakers asking “big questions,” exploring what it means to be human.

This year’s events – the second time the Institute of the Humanities & Global Cultures has sponsored the weeklong program – brought humanists “from all corners of the University,” said institute director Michael Levenson, an English professor in the College of Arts & Sciences. Professors and students “showed their colors, flaunted their convictions,” he said.

Those colors and convictions filled the air in the Dawson’s Row courtyard, a grassy patch about 20 feet by 60 feet tucked next to Cabell Hall that served as the epicenter of the week’s activities. Starting with the idea of erecting “a Humanities Tent,” students in a one-credit course that Levenson and architecture professor Bill Sherman led this semester, “The Humanities in Place: Academic Space in Theory and Practice,” created a series of wing-like fabric structures to mark the space. Experimental films and photos were projected onto hanging sheets, illuminating the nights.

In one of the first events, Monday evening, poets from the U.Va. English department’s Creative Writing Program – Paul Guest, Debra Nystrom, Gregory Orr and Lisa Russ Spaar – read poems they have written and, together with colleagues and students, translated into several languages.

Mehr Farooqi, assistant professor in the Department of Middle Eastern and South Asian Languages and Cultures; Kevin Hart, Edwin B Kyle Professor of Christian Studies who chairs the Department of Religious Studies; and Fernando Operé, professor of Spanish, also have published poetry and contributed their poems in their native languages.

Writers have begun an initiative to make connections among poets, translators and poetry lovers across as many U.Va. departments as possible, said Nystrom, one of the event’s organizers.

At a Wednesday night program, “Unholy Unions, Unexpected Understandings,” five guest speakers shared their passions and thoughts on what it means to be human, while keeping the tone light-hearted and humorous. Each of the speakers, who included two undergraduate students, a community member, a French professor and Dean of Students Allen Groves, had seven minutes to talk about a topic of their choosing.

“We want to link together the low culture of everyday life with the high culture of the humanities,” said Elizabeth Leet, a doctoral student in French who hosted the event with fellow graduate student David Barr.

The program opened with third-year student Charlie Tyson’s talk, “Mental Dead-Lifting.” Inspired by a humanities graduate student who told him, “Graduate school will make you fat,” Tyson discussed staying fit while a student and the woes of gym-going.

He proposed the question, “What would famous philosophers think of the Aquatic & Fitness Center?” and went through a list that included Thomas Aquinas, Plato, Judith Butler (“the gym reaffirms gender norms”), Friedrich Nietzsche, Immanuel Kant, Voltaire (“the AFC is the best of all possible gyms”), Sigmund Freud and Aristotle (who he concluded would probably enjoy the gym).

Groves talked about why he decided to be a history major in college. “People ask me all the time why I majored in history, and I always answer, ‘The outfits,’” he said. Growing up, Groves’ favorite historical figure was Napoleon, because he looked “fabulous,” Groves quipped.

On Thursday, a small band of students gathered on the shady side of the Dawson’s Row tents to make other links by experimenting with “found poetry.” Two fourth-year students, Isabelle Conner and Victoria Kornick, have been teaching a workshop this semester devoted to found poetry – a hands-on way of making poems by taking scraps of poems, words, phrases, pieces of already written text, whether a newspaper article or a magazine advertisement, and reorganizing them to create another text that is poetic.

Through the process, which incorporates collage, the class is exploring “the appearance, sound, and boundaries of language as well as its meaning, taking words out of context to show students the alchemy of transforming everyday life into poetry,” as Conner and Kornick described it. During the Humanities Week event, participants got to try the creative process themselves.

Poets and other professors regrouped Thursday afternoon to share poems that help them in troubled times. Organizer and English professor Clare Kinney brought a crew of professors to recite “emergency poetry” and talk about how a particular poem, especially one that has been memorized.

Kinney summarized the idea of the “emergency poem” as “the poem you can't do without: a beloved object, a restorative, a mantra, a momentary stay against confusion, a special touchstone for its possessor (or borrower).”

After reciting a love sonnet by late 17th-century poet Michael Drayton, “Since There’s No Help,” Kinney said it exemplified her own particular kind of emergency poem, “the literature of second chances.”

English professor Stephen Cushman described another kind of crisis: “The emergency can be if you fear you’re losing your memory or your mind,” he said. He recited “Caedmon’s Hymn,” from the seventh century, the oldest recorded poem in Old English, Turning to origins can be restorative, Cushman said.

Overall, Levenson said he had received lots of comments about the events – all strong and celebratory.

Whether the events were healing, funny, challenging or soul-stirring, “Each day renewed the blooming diversity,” he said, “in word and image, thought and song, found poetry and late-night movies, in our tents and on our screens. We have much more to do in the cause and mission of the humanities, but now we begin to see how it can be done.”

Fall Is in the Air on Grounds END_OF_DOCUMENT_TOKEN_TO_BE_REPLACED