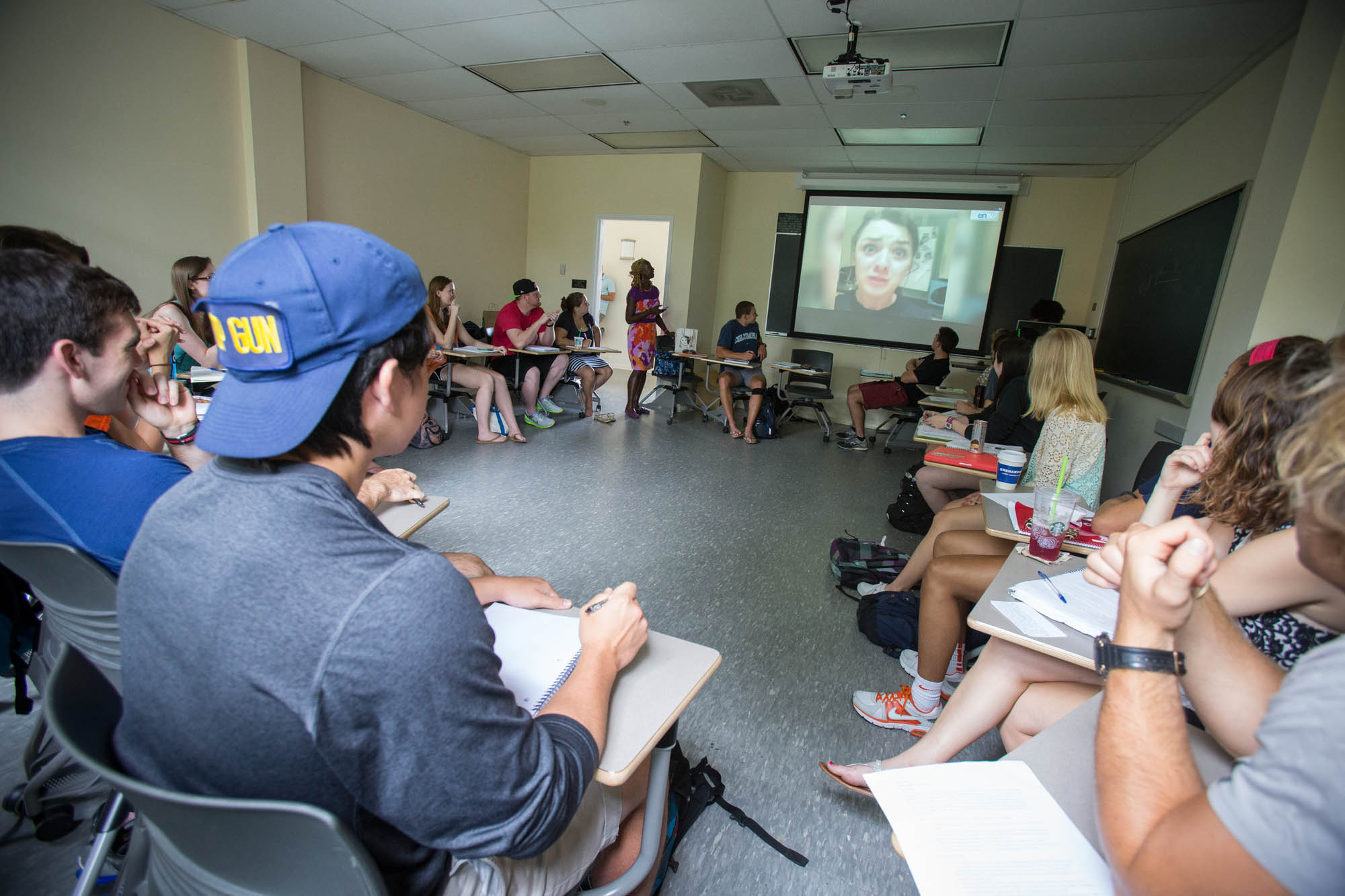 Students discuss the latest installment of the Game of Thrones series.&amp;nbsp;

“When you play the game of thrones, you win or you die,” future Queen Cersei Lannister says in the first season of the “Game of Thrones” television series. “There is no middle ground.”

Though George R.R. Martin’s Emmy-nominated series may be filled with surprisingly more violence and gore than the average HBO flick, for University of Virginia students enrolled in Lisa Woolfork’s summer English course, discussion of the smash fantasy drama series goes far beyond those grim absolutes.

That’s because they’re studying not only a genre of literature – fantasy – that isn’t usually discussed in English classes, but a book and television series that’s still being written, and a transforming medium of storytelling that is still evolving in the modern world.

“Game of Thrones” is as current as you get, a unique breath to an academic discipline that’s more often concerned with what critics and academics have already dubbed to be “classics.” But then again, not much is conventional about Woolfork’s course, a four week, discussion-based seminar that divides its focus between the first “Game of Thrones” novels and watching the first three seasons of the show.

“One of the goals behind this class was to teach students how the skills that we use to study literature are very useful skills for reading literature and TV in conjunction,” Woolfork, an associate professor of English, said. “‘Game of Thrones’ is popular, it’s interesting, but it’s also very serious. There are a lot of things in the series that are very weighty, and very meaningful, and can be illuminated through the skills of literary analysis.”

Critics have called the book series “groundbreaking” and “genre-bending” because of its deeply layered themes of power, honor, loyalty and corruption, as well as its exceptionally broad and active international fan base. The television series, which first aired in April 2011, has attracted a record number of HBO viewers – recently beating out “The Sopranos” for the all-time top spot in the cable channel’s ratings.

The series is known for taking viewers on an emotional ride: favorite characters unexpectedly and uneventfully die, relationships rock and crumble, and hidden motifs and agendas quickly become major players. It’s these layers, twists and turns that make the series useful for literary analysis, according to Woolfork, regardless of the medium through which the stories are told.

Visual representation doesn’t supplant or take away from the novels, she said, but enhances them – and in a world where the major sources of storytelling are increasingly visual, developing the skills to analyze how plot devices and weaving storylines translate to film will be crucial for the storytellers of the future.

“It’s so literary – how in-depth it is, how robust it is, how much there is to discuss about it,” she said, “but we’re also very concerned about the pop culture aspects, how we as viewers receive ‘Game of Thrones.’ I think it’s important to apply the same principles we do with literature to television and film, and that’s determined a lot of the English courses I’ve taken.”

One of the most poignant aspects of the series is its capability to reflect the human condition. In a recent class, students discussed “The Red Wedding,” an event consisting of the shocking and gruesome killings of one of the series’ main families, characters that seemed crucial to the series.

But Martin places a greater focus on the aftermath of the violence; after major deaths, the books and the seasons don’t end, as many other series would. One of the greatest lessons of “Game of Thrones,” the class argues, is how life goes on after death.

They’ve also examined the importance of honor – a high value at U.Va., but also in the series’ fictional lands of Westeros and Essos, where there are heavy taboos about carrying out murder during a meal. Topics of racialism, fan-fiction, power in gender roles, identity formation and cultural allegory sprout up from chapter to chapter, and the novel’s storytelling from multiple characters’ perspectives bends the way readers perceive situations that would have been considered “evil” or “good.” Martin, many critics have stated, is concerned with writing his characters in the gray.

There’s no lack of student participation in Woolfork’s 24-person class. Students are poised to leap out of their seats to contribute to discussion, which they take turns leading.

“There’s a lot of detractors who say [‘Game of Thrones’] is not really worthy of academic attention, so I think in a way the class legitimizes it for us,” said Alexandria Shofe, a fourth-year English major. “All the stuff we’ve read on it says it’s breaking out of fantasy’s literary ghetto.”

The class culminates with a group-based creative project, where students had to come up with their own way to write a new chapter in the fantasy saga.

“All of them have to connect in some way to how ‘Game of Thrones’ has sustained itself as a cultural phenomenon,” Woolfork said. “Some are writing a prequel graphic novel; others are working on spoilers. … I want them to consider, ‘How do you track the progress of a book to a TV series to this large phenomena, and how does that transform?’ Literarily speaking, it’s very diverse and rich text. It has lots of layers, lots of characters, and it’s very smart.”

Message from President Ryan Regarding Fatal Shooting on Grounds END_OF_DOCUMENT_TOKEN_TO_BE_REPLACED