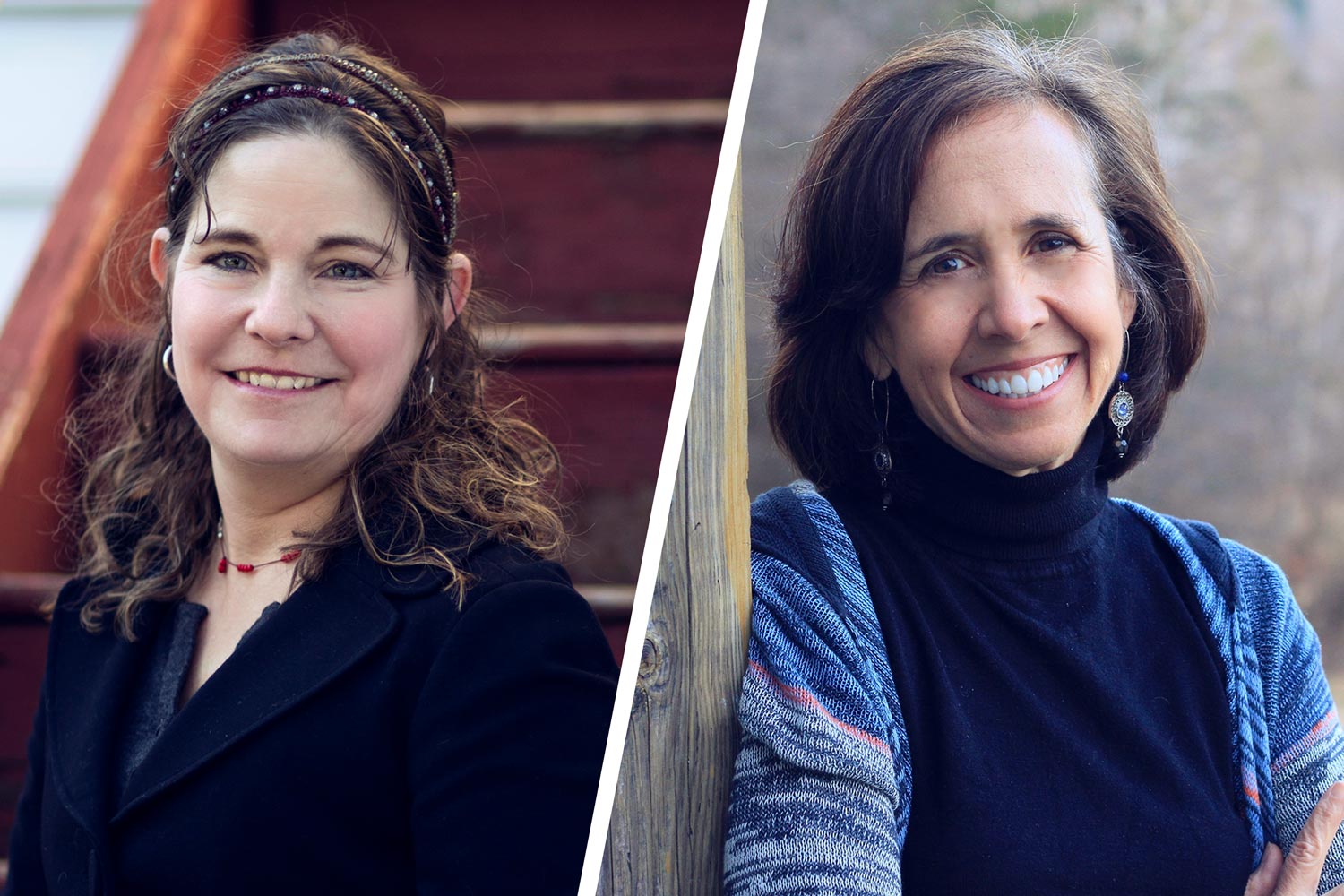 A constellation against a dark sky or a handful of sand strewn across the floor – that’s how one woman in a writing workshop described the mammography images of the early breast cancer she saw in her own body.

“It’s not just about the cancer,” said Jocelyn, who gave only her first name. “The disease doesn’t have to define you. Writing stirs up a lot about life, and cancer is a piece of it. It’s about life, the hopefulness of it.”

She has been able to share all she’s been through in writing workshops offered online and at the University of Virginia’s Emily Couric Cancer Center by poet Charlotte Matthews, a UVA alumna who teaches in the Bachelor of Interdisciplinary Studies program in UVA’s School of Continuing and Professional Studies.

Although medical care and treatment for breast cancer have greatly improved and there are a variety of support groups out there, Matthews felt something was missing after she went through aggressive treatment to overcome stage 3 breast cancer 12 years ago. She discovered that through her writing, she could confront what was happening and find a way to renew her life.

“I realized this was my dream – to bring writing to women who had undergone cancer,” she said. Matthews ended up sharing her idea with UVA alumna and award-winning documentary filmmaker Betsy Cox. Soon “Whistle Words” was born, a multimedia project that would offer writing workshops to women during and after treatment for cancer who could also share their voices through a film and interactive website.

The writing workshops – which are free – have helped other women who might feel lost or misunderstood like Matthews did. The results have been amazing.

“I’ve come alive in this workshop. I’ve missed my feelings. Thank you!” says one testimonial on the website.

“I feel like I’m understood when I share,” reads another. “I don’t feel embarrassed by what I’m writing. Listening to others has resonated with my own struggle. You’ve given me a voice.”

About the writing process, another participant wrote, “It has been comforting to be drawn back in again and have an opportunity to take stock of life in fresh ways, with other women, through words. New words. Unearthed words. Words that become threads, reworking fabric into something new.”

“Writing is the tool, and not the goal. The workshops are not designed to ‘teach’ writing,” Matthews said, “but rather to use writing as a means of empowerment at a time often marked by feelings of isolation and a lack of control – all within a community of women on similar journeys. The sessions are raw and quite powerful, and the bonds among the women form quickly and are strong.”

Matthews has held workshops at the UVA Cancer Center, Sentara Martha Jefferson Hospital and nearby churches. On Wednesdays, she leads weekly sessions online. Women can connect to the online workshop once, every week or as often as they want.

Jocelyn, who took Matthews’ workshop in the fall and plans to take another one, said she had a lot of support and resources when undergoing treatment the second time she had breast cancer. When that daily structure and support tapered off, she wasn’t sure how to navigate this new version of her life anymore. Unlike some women, she had left her job and put off what she was going to do next.

Jocelyn tried other support groups – even a fly-fishing retreat. For her, the writing workshop provides a community where she and the participants can feel safe sharing their vulnerability, without judgment, she said. The way Matthews runs the workshop with a grab bag of writing exercises makes it fun and surprising.

“We’re not always in tune with our heart, or soul, if you will. Charlotte gives you the tools so you can be real – no pretense,” Jocelyn said.

“Everybody has a story, everybody can write, as long as they have a basic literacy,” Matthews said in a recent session that served as an introduction to the workshop series she’ll continue in February. At that meeting, she had written this quote on the white board: “Writing is the guardian of human dignity and significance,” from the poet Stanley Kunitz.

Cox, who knew Matthews from a yoga class, had a good friend going through cancer and was witnessing her struggles long-distance. After reading “Whistle What Can’t Be Said,” Matthews’ book of poems that was partly inspired by her experience with cancer, Cox wanted to help Matthews make her dream a reality.

“Writing is empowering. Sharing that writing with an audience amplifies that a hundred-fold,” Cox said. “When you’re feeling isolated – as many, many women with cancer do – being heard is huge. That’s why we have the website and are making the documentary – the project is designed to build community on many levels.”

Just as Matthews’ poems touched and inspired Cox, she hopes the documentary will also help the loved ones of those going through cancer, as well as the patients or survivors themselves.

The Whistle Words website features poetry and artwork from participants, information about workshop times and a trailer Cox has already produced to launch the project, based on one of Matthews’ poems.

Through her production company, Red Spark Films, Cox seeks to “tell people’s stories who rarely have had a platform and are often overlooked in mainstream media,” she said. Members of the writing workshops will have the option of being part of the film, but aren’t required to participate.

The next free workshop in partnership with UVA will begin Feb. 2 and will be held every Friday through March 9, from 10 to 11:30 a.m., at the University Baptist Church. Signing up is encouraged by calling 434-297-4870 or going to the website.

Each workshop includes a range of writing exercises to help get the creative juices flowing, from reacting to an inspiring photograph to describing a room from one’s life that comes to mind. After a 10-minute period of writing, for example, everyone has the option to read aloud some or all of what they wrote. Later they can have their work posted on the website, adding an audio reading of their poems if they want.

Matthews, who earned her B.A. in English at UVA in 1988 and has published three books of poetry, is humble about her way with words. She listens as each woman reads, jotting down phrases and images along the way. She has an uncanny ability to capture the poetry that appears in everyday life. She strings together their words, creating a group poem that shimmers with insight and imagery, with unabashed feelings and honesty. This is one way she tries to lessen the mystique of poetry as she shares the power of their writing.

Here is one of the group poems from a recent workshop. 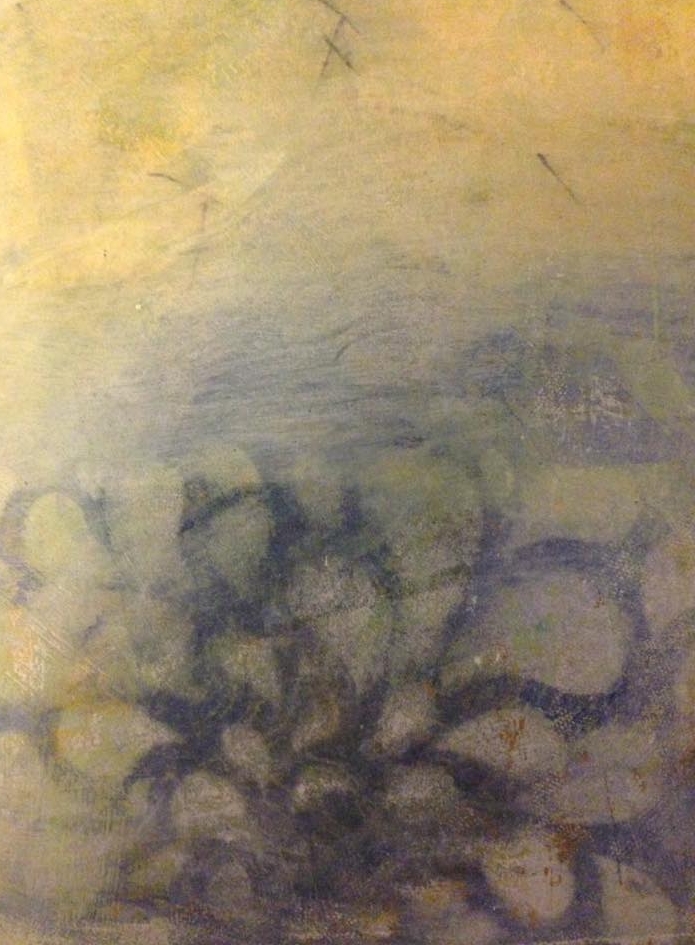 Used by permission of the artist, Kristin Rexter.

What I want to talk about is the healing room,

place to hide, a treehouse, small bed of branches

where you can see the weather coming,

watch the hillsides green, focus of all the colors

of silver. It’s exactly what I want. Envision it:

everyone has on felt slippers and before you know it,

you are high above the fray. You are purposeful,

patient, like a hand stitched quilt. I am real

and the nurses are real. But what if it changes?

What if I do? To get there focus on the beauty,

you will remember being asked what you wanted.

Another workshop member, Elizabeth, first met Matthews in one of the writing classes she teaches for the BIS program, and has since joined a Whistle Words workshop. Elizabeth has a different health issue: Living with chronic Krohn’s disease, she regularly takes medication that is similar to chemotherapy, she said, and goes to the Cancer Center for monthly treatments.

“I take my poems to my doctors when I want to explain something that’s hard to talk about,” Elizabeth said. Her doctors have noticed, and say she has a better outlook, “a bounce in her step,” since she joined Matthews’ writing workshop. She has even decided that getting sick was more of a blessing than a curse, she said.

Elizabeth has been so inspired by writing to explore and work out what she’s thinking or feeling that she has compiled her own book of poems. Like Jocelyn, she appreciates the community the workshop fosters and being able to relate to others without worrying about giving too much information.

Matthews and Cox plan to produce an anthology of the women’s work along with the documentary, packaged with a facilitator’s guide, so that Whistle Words can be replicated in any community and available to cancer centers.