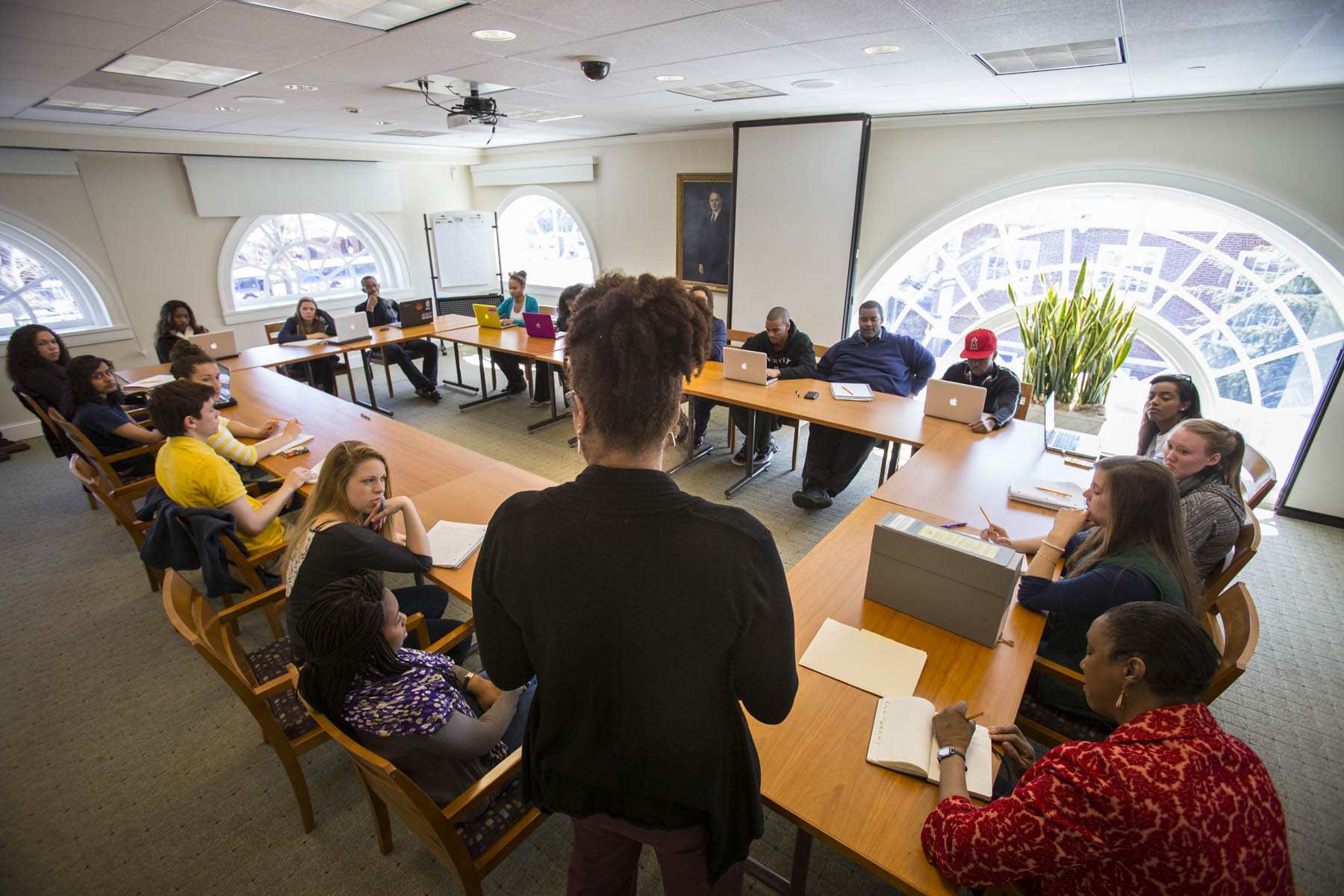 In “1964,” a seminar offered this spring, University of Virginia students examined the papers of civil rights activist Julian Bond, a U.Va. history professor emeritus. In a companion course, “1963,” offered last fall, they spoke with U.S. Rep. John Lewis via Skype about his experiences working with the Rev. Dr. Martin Luther King Jr. This summer, students will study aspects of the curriculum taught in the “Freedom Schools” of July 1964 and recreate a slice of that summer’s campaign to register voters and teach literacy.

These classes are part of an initiative organized by U.Va.’s Carter G. Woodson Institute for African-American and African Studies, “50/5: Remembering the ‘Modern’ Movement for Civil Rights,” which is focusing on several 50th anniversaries over the course of five significant years – 1963 through 1968. The series began in the fall and more events and courses are being planned through 2018.

“Students are so thirsty for this knowledge,” said Deborah McDowell, Alice Griffin Professor of English, who directs the Woodson Institute and, along with Woodson Institute fellows, is teaching some of the courses.

The institute and Summer Session are offering a pair of courses in the coming months: “Mapping Virginia in the Civil Rights Era,” June 16 to July 12, and “Freedom Summer,” July 14 to Aug. 8. Students can take one or both of the classes. U.Va. employees can also sign up, using their employee education benefits.

“Mapping Virginia,” led by pre-doctoral fellow Laura Helton, will marry archival resources of the past with digital technologies of the present to examine Virginia’s pivotal role in the Civil Rights Movement. Students will explore how different struggles and strategies for change unfolded across the state’s diverse geography, and will build a digital map of Virginia’s civil rights timeline.

The second course, which post-doctoral fellow La Tasha Levy calls “Mississippi in Virginia: The Work of Freedom Summer,” will include a service-learning component designed to revive the movement’s emphasis on voter registration, literacy and cultural performance, in addition to a syllabus of readings, lectures, exams and papers.

One class session when her students examined Bond’s papers, housed in the Albert and Shirley Small Special Collections Library, they met in an upstairs room at the library. Petrina Jackson, head of special collections instruction and outreach, wheeled in a cart filled with gray storage boxes containing a variety of items, including letters, newspaper clippings, press releases and minutes from meetings of the Student Non-Violent Coordinating Committee, which Bond helped found.

The materials, which document SNCC’s concerns, help build the context for projects like Freedom Summer, McDowell said. Using Bond’s materials exposed her students to the work of archival research connected to a cluster of related writing assignments.

While focused on 1964, the course also featured materials from earlier decades. “As I explained to the students, while we focus primarily on major events in that one year within the broader trajectory of the Civil Rights Movement, we cannot understand it fully without recourse to earlier decades,” McDowell said.

Second-year student Marcus Cross, who also took McDowell’s 1963 course in the fall, said he has learned what the civil rights activists were fighting for and a lot about the political platforms they put together. “We’ve learned about all the people, big names and more – Julian Bond, John Lewis, Bob Moses, Ella Baker, Fannie Lou Hamer.”

Cross-listed with English, the reading list for McDowell’s course focused heavily on literature, including Eudora Welty’s “Where is the Voice Coming From?,” Sally Belfrage’s “Freedom Summer” and Alice Walker’s 1976 novel, “Meridian,” which focuses on SNCC workers and depicts competing philosophies within the Civil Rights and emerging Black Power movements.

“‘Meridian’ captures the less triumphant moments of the Civil Rights Movement. It captures the casualties,” she said. “This was a movement of great violence – many people suffered physical, psychological and emotional harm. Many were murdered for exercising their rights to vote, their rights to the rights and privileges of American citizenship.”

One highlight of the fall semester course was the Skype conversation with Lewis, who was elected to Congress in November 1986 and has served Georgia’s Fifth Congressional District since then – a conversation that was briefly interrupted when a bell rang and Lewis had to leave his office to go vote on several bills.

“We described scenes of protests, violence and segregation. We told the president people were restless,” he recalled. Lewis also told the students he’s frustrated about today’s economic uncertainties and worried that they’ll inhibit young people from protesting against the problems of this period.  He also expressed dismay that Section Five of the Voting Rights Act was recently gutted.

“The right to vote is sacred, the most powerful instrument in a democratic society,” he said.

“Commemorating anniversaries often becomes an excuse for avoiding the urgencies of the present,” McDowell said, “so I want to make it clear that we are revisiting this period for its relevance to our current lives.”

First-year student Kiera Givens, who arranged the conversation with Lewis, said she thought she knew what the Civil Rights Movement was all about, but found herself learning new things through the in-depth study in McDowell’s course and from her classmates.

“This has been my favorite class,” she said.