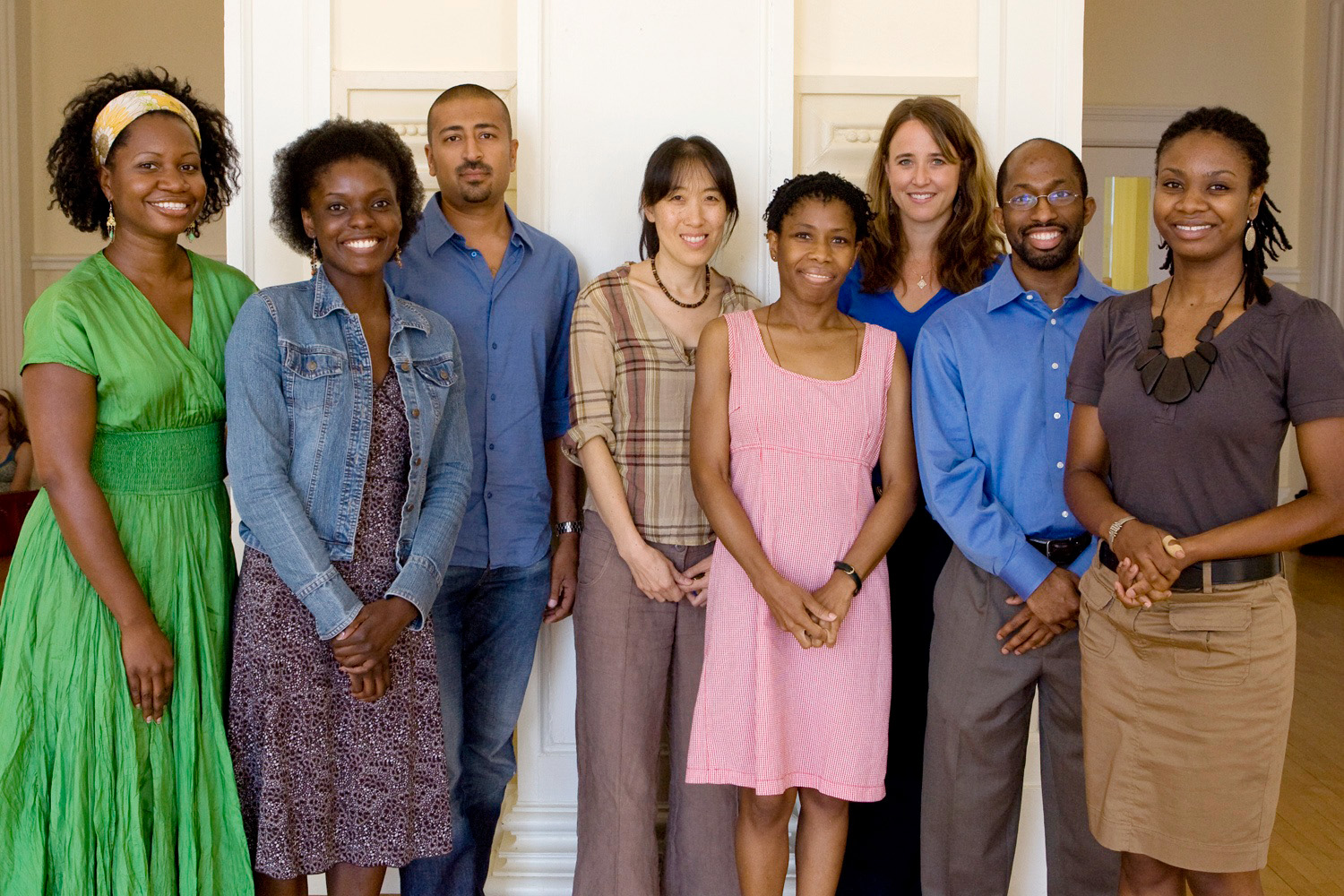 October 10, 2008 — The lobby of Minor Hall at the University of Virginia is adorned with poster-sized covers of books written by previous fellows at the Carter G. Woodson Institute for African-American and African Studies.

They are a tangible sign that the institute, established in 1981 and named for native Virginian Carter Godwin Woodson -- only the second African-American to earn a Ph.D. in history from Harvard -- is fulfilling its mission to not only enhance the teaching of African and African-American studies at U.Va., but also to establish a research center that would make important contributions to scholarship.

And the cornerstone of that effort is the institute's fellowship program. Since its founding, the institute has sponsored 129 fellows whose work has been published by university presses and academic journals.

Six fellows joined the institute this fall, bringing the total to eight. "By fall '09, we will have 12, a number which we hope to sustain into the foreseeable future,” said director Deborah E. McDowell.

The Woodson fellows are a diverse group of young scholars from different disciplines in the humanities and social sciences who work on a wide array of topics in African-American and African studies and related fields.  “An intense application process whittled hundreds of applicants down to this year’s six winners, and the new fellows are stellar,” McDowell added.

It all adds up to one of the most exciting times in the institute's 27-year history. Some of that excitement will be shared at the annual "Meet the Fellows" presentations, to be held at 3:30 p.m. Wednesday, Oct. 15, in the South Meeting Room of Newcomb Hall.  There the current fellows will discuss their passions and research with students and faculty.

Woodson was an eminent historian whose accomplishments included establishing the Journal of Negro History in 1916 and founding Black History Week, which later became Black History Month. The first director of the institute, the late Armstead Robinson, sought to carry on Woodson’s legacy of leadership and scholarship.

The Woodson Institute provides its fellows a two-year stipend to research and write at the University, whether they are working on a dissertation or turning that dissertation into a published manuscript.

For a pre-doctoral program to provide students with two years to complete their research is almost unheard-of.  "The two years was huge," said Anoop Mirpuri, one of the four new pre-doctoral fellows, along with two incoming post-doctoral fellows. "It was a long move for me, coming from Seattle, but having so much time is really rare."

"We have many reasons to take pride in our fellows," McDowell said, noting that this year alone, major academic awards have gone to two fellows.

Deirdre Cooper Owens, one of the new post-doctoral fellows, won the Mary Wollstonecraft Dissertation Award recently, given annually to an outstanding doctoral dissertation pertaining to women or gender that uses historical materials and methods. She received her Ph.D. in history at UCLA in May.

"My project is a comparative race study on enslaved women and poor Irish immigrant women who lived during the antebellum era, in the South and in the North," she said. "In a larger sense, I'm interested in understanding how slavery and immigration impacted the growth of American modern gynecology."

While writing a book based on her dissertation, she is preparing to teach a course in the spring titled "From Gold Coast to Reparations: A Social History of Slavery in America."

Kristin Phillips, a pre-doctoral fellow from the University of Wisconsin, now in her second year at the institute, won the Graduate Student Paper Prize for "Consuming the State: Hunger, Healing and Citizenship in Rural Tanzania," presented last year at the 50th annual meeting of the African Studies Association in New York.

The award committee noted that Phillips' paper "addresses an important problem — hunger — in a community in central Tanzania through multiple visions: that of the people, that of local administrators, that of the state authorities and in popular visions represented through newspaper commentary."

Phillips will present another paper at the 2008 conference this month.

Woodson alumni are also making their marks in academia, landing subsequent fellowships and jobs at prestigious universities such as New York University and the University of Chicago. One former fellow, Tera Hunter, was recently appointed professor of history at Princeton.

“The Woodson Institute has historically played a significant role in faculty recruitment for the University,” McDowell said. "We take the best of an invariably excellent crop of people, and try to place them into departments across the University.

"Whenever we can make such connections, we are very happy," she said, for such appointments go far to support the University’s expressed commitment to creating and sustaining a diverse faculty.

Lott said the institute played a key role in the development of his early work. "It was and remains an extremely rich environment of intellectual exchange and solidarity, one that I count on still," he said.

The legacy of the institute and the intellectual community around it constantly inspire the fellows as well. For Rosemary Millar, a pre-doctoral fellow focusing on utopian literature, the strength of the academic community at U.Va. presents a unique opportunity.

"It's an honor being in the presence of the fellows who are and were here, to be with wonderful scholars and have intellectual stimulation within a small group," she said.

That connectedness is what Robinson envisioned when the fellowship program began, and it is vital to the ongoing success of the institute, McDowell said.  “It is important that fellows be immersed in the broader intellectual community of the University and, in turn, that the University community be kept abreast of the exciting research flowing out of the Institute.”
Resources
www.artsandsciences.virginia.edu/woodson.
See http://artsandsciences.virginia.edu/woodson/news/events/index.html for a listing of Woodson Institute events.)

Netflix to Add Ads. Why This Could Be a ‘Game-Changer’ for Your Viewing Experience END_OF_DOCUMENT_TOKEN_TO_BE_REPLACED

What’s Next for UVA’s Class of 2022? END_OF_DOCUMENT_TOKEN_TO_BE_REPLACED