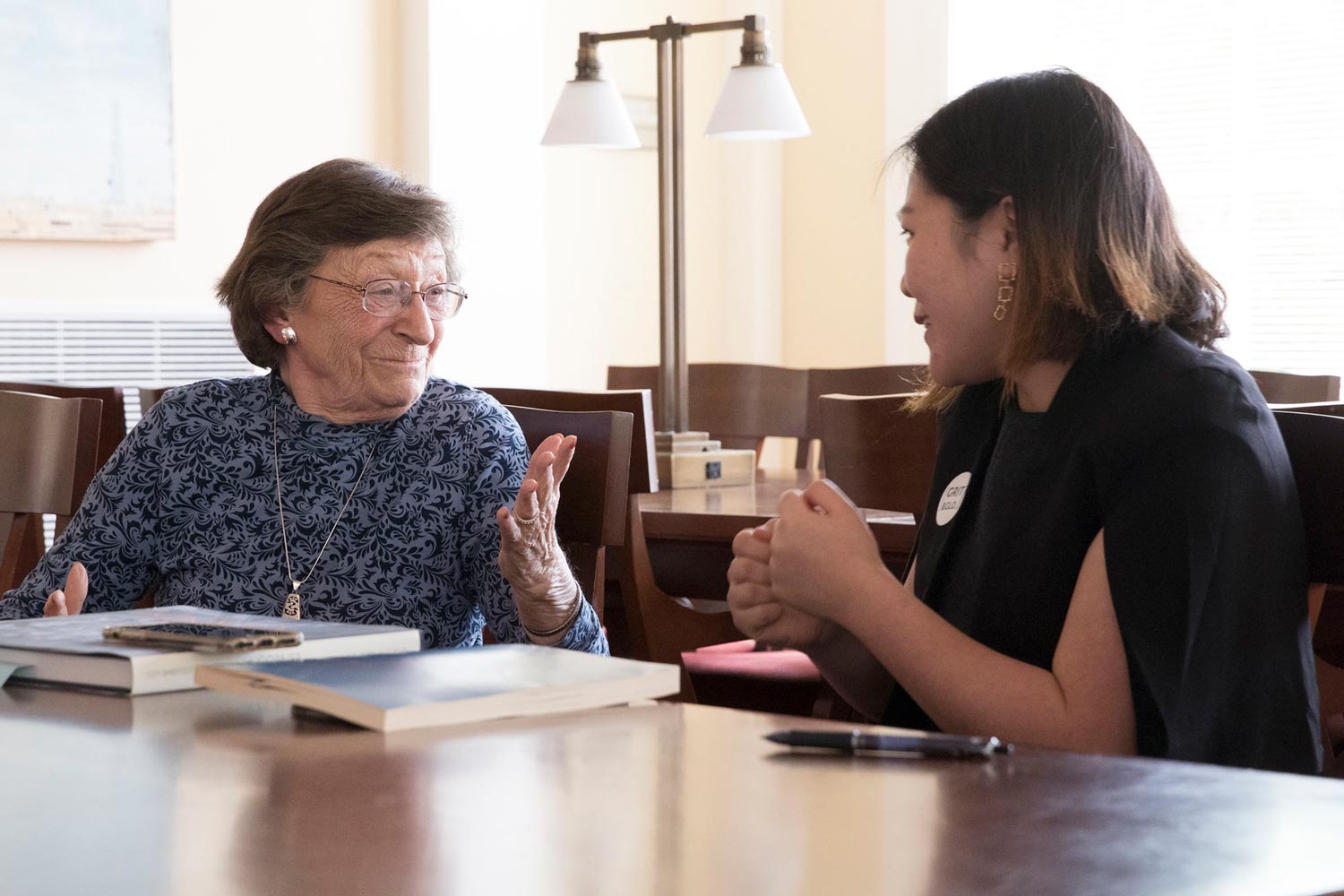 As World War II drew to a bloody close just over 70 years ago, a young woman from Charlottesville transferred into the University of Virginia’s McIntire School of Commerce – the only woman in the school’s Class of 1946.

Patricia Earle had never intended to go to the University. Though her father graduated from the School of Law, Earle never really believed UVA had a place for her. She mostly associated the University with the crowds of often-rowdy men who roamed through her town; besides, there were few openings for women there.

“The University had a sort of dual personality in my young mind,” Earle recalled, sitting in the Commerce School’s library on a sunny morning this spring. “It was so revered, as you can feel when you see the Rotunda. But I also knew and respected the fact that it was only a place for men.”

To her own surprise, Earle found herself breaking that stereotype when she graduated as the only female member of her school’s class. Now, more than 70 years later, she found herself sitting next to 2017 graduate Gloria Felicia in the library. When Felicia graduated from the Commerce School last year, 48 percent of her class was female.

“I really need to thank you,” Felicia said, meeting Earle’s eyes as the 92-year-old smiled. “You paved the way for the rest of us.”

Felicia wanted to give back to the Commerce School and decided to honor some of the first women to graduate from the Commerce School with a Dean’s Society leadership level gift. Her research led her to Earle, the school's oldest living alumna. To Felicia, the timing was perfect and the financial sacrifice well worth it.

“Now is the time for a lot of women to rise up in their fields, whether they are in commerce, in STEM or something else,” she said. “What Mrs. Earle did gave a lot of confidence to later generations of women.”

She and the others gathered around the table – including three of Earle’s five children and several of her extended family (many of them also ’Hoos) – were eager to hear the alumna’s stories of life at UVA in the 1940s.

In the Shadow of War

The teenage Earle, then Patricia Walker, was interested in studying foreign affairs. There was a war on, after all.

She wanted to go to college out of state but her father would not permit her to do so unless there was a relative living nearby. So after graduating from high school in 1943, she enrolled at Cumberland College, a small private school in southern Kentucky, where a relative lived. However, the worsening war made her father nervous and he asked his daughter to return home to Charlottesville after just one year. She recalls having to stand up or sit on her suitcase the entire train ride home from Knoxville, Tennessee; all of the cars were overcrowded with men in uniform, many of whom were also forced to stand the entire trip, and the mood was somber.

“The war news was bad; everyone was nervous about what was going to happen,” Earle said.

Earle came back to an altered University. Most of UVA’s regular students had suspended their education to fight in the war. Instead, the Grounds were teeming with U.S. Navy recruits. UVA, along with 130 other colleges and universities in the country, participated in the V-12 Navy College Training Program, which offered expedited bachelor’s degrees for naval officers in training. 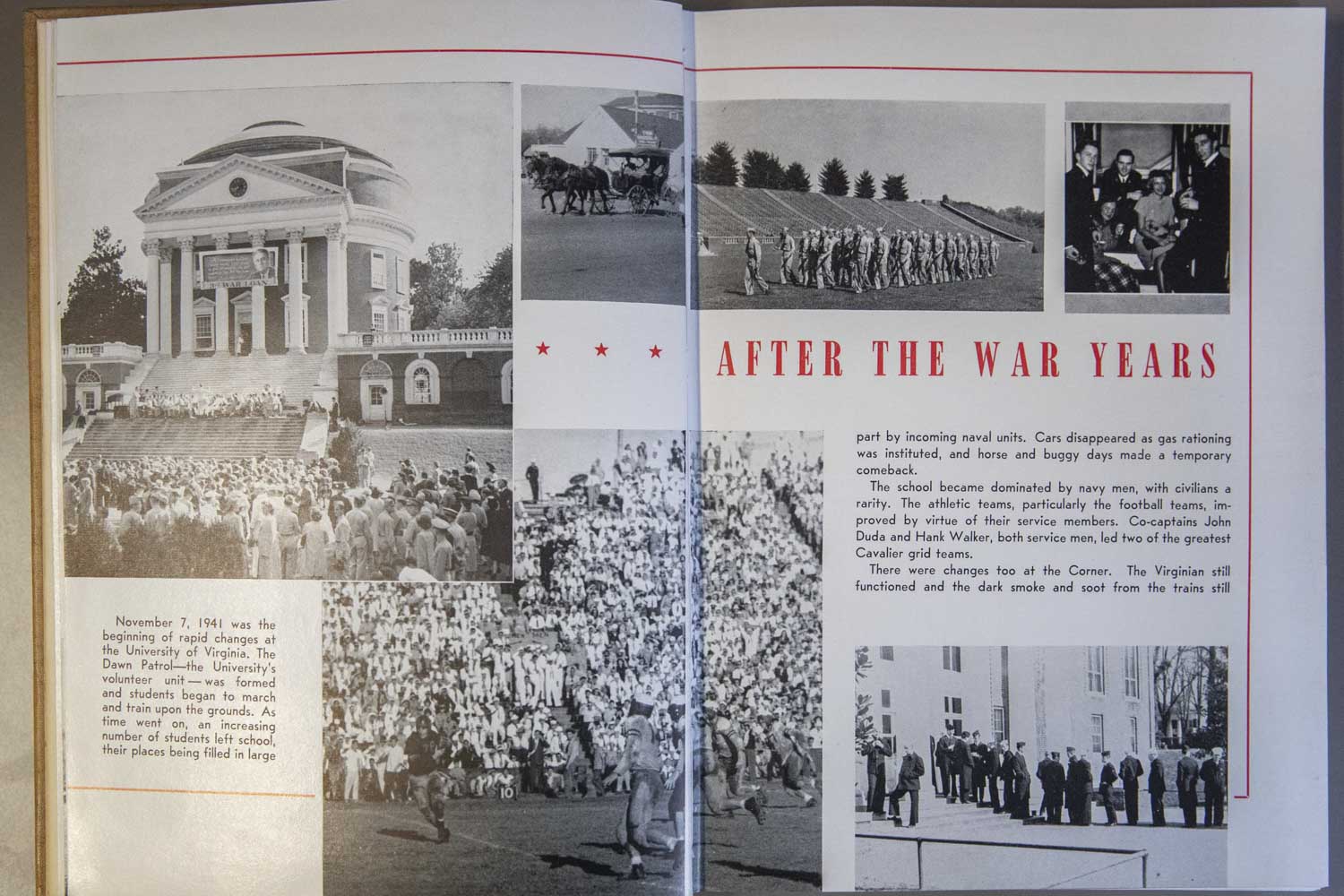 The wartime program was designed to maintain academic rigor while producing college-educated officers – sorely needed overseas – at a quick clip. The academic year was divided into three semesters of four months each, with classes continuing all year. Another program, The Allied Military Government School, trained Army recruits on Grounds.

Despite the ongoing war, Earle did not want to give up her education. When she came home, her father encouraged her to enroll in UVA’s Curry School of Education, the only school that welcomed women at the time.

There was just one problem: Earle had no desire to be a teacher.

“I had some high school friends who were there, so I decided to try it,” she said. “After one semester, I realized it was just not for me. I was wasting my time and they were wasting theirs on me.”

She shared her concerns with a friend, who suggested that she talk to Tipton R. Snavely, who headed the McIntire School of Commerce, then under the umbrella of the College of Arts & Sciences. The friend’s sister was engaged to Snavely’s son, and she felt confident he would listen to Earle.

“That’s how small this place was,” Earle said, laughing. The administrator, she said, was very gracious.

“He assured me that I would be welcome, that there was a place for me and that he would accept my transfer into the Commerce School,” she said.

Earle was delighted. She was intrigued by the world of business and felt confident the degree would help her support herself down the road.

“I wanted to have some way to be independent, to take care of myself,” she said.

Still, the young woman was nervous about walking into a classroom full of men. There was one other female student taking a few classes in the school, but Earle knew she would mostly be the only woman among her male classmates.

“It was intimidating,” Earle said. She had heard rumors that UVA students would stomp their feet – loudly, in unison and in clear protest – when a female student walked in the classroom.

The dean of women at the time, Roberta Hollingsworth, knew of that particular custom and advised Earle to lay low.

“The advice given to me was not to call attention to myself,” she said. “Otherwise, they might stamp the floor when I tried to come in.”

Fortunately, Earle encountered few problems. She speculates that was because her classmates were mostly U.S. Navy recruits and did not know as much about UVA traditions – even unscrupulous traditions, like stomping at female students.

“They did not come here because it was a men-only school,” she said. They simply came for the Navy. “I think it made a big difference in the way I was accepted.”

By her last year on Grounds, more and more ’Hoos were returning from the front and resuming their education. Again, Earle was nervous about how the returning students would react to a lone woman in their midst. However, she found that age and the war had changed their perspective.

“When the war was over, there was a new wave of returning students in 1945,” she said. “and there was a difference in their attitude. Many were now married and brought their wives with them.”

Indeed, the war changed much at the University. The “Corks and Curls” yearbook for 1946 poignantly chronicles transition from war to peace the University that year.

“This past year at the University of Virginia has been one of sweeping changes,” the editors wrote in the front of the book. “Along the hallowed lawns and ranges there has been a rapid exchange of Navy blue for civilian clothes again. This 1946 ‘Corks and Curls’ emphasizes the changeover from war to peace. With no apologies, we emphasize the peace. Four years of war, however, have inevitably left their mark.” 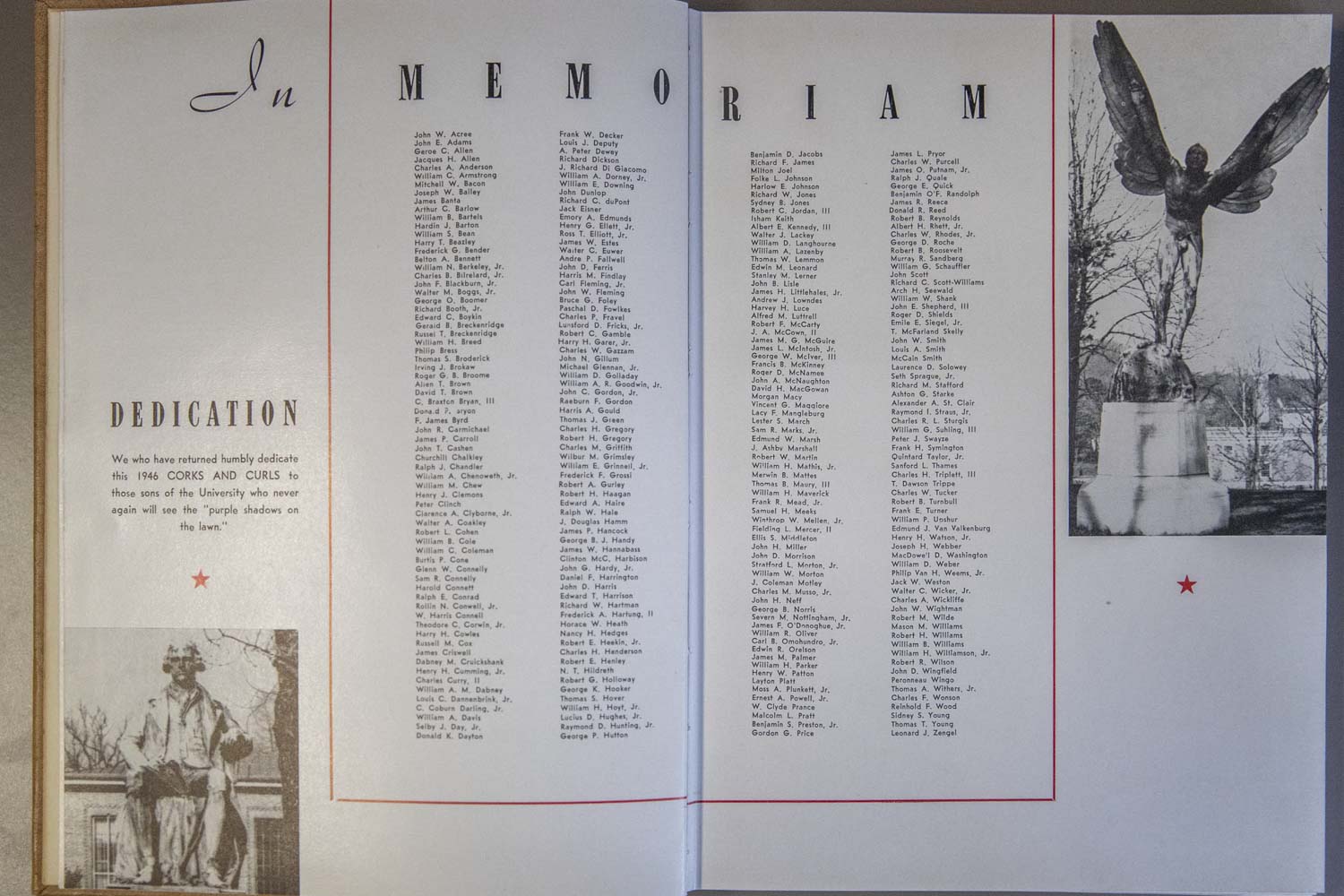 The book is dedicated to UVA students killed in the war, their names filling four columns in tiny print on the second page.

“Those years were so unique in comparison to anything before or after,” Earle said. “The lessons I learned here, I carried with me forever.”

Among them, she said, was to focus on doing the right thing and staying true to herself, without worrying what others thought. She credits the University’s honor code with instilling that lesson in her.

“I was so afraid to call attention to myself at first, and I realized that might make me reluctant to try to report an honor violation if I saw one,” she said. “I was so afraid of what people would think of me, but I finally realized it was more important what I thought of myself. Whether I had done the right thing was so much more important than how others might receive me.”

Earle said that her Commerce degree served her well throughout her life. She and her husband – the late U.S. Army Col. Frank H. Earle, also a University alumnus – traveled the world for his military career.

Although Earle’s college degree qualified her for several different jobs, it was rare at the time for military dependents to be employed on bases and overseas installations. However, during the Korean War, when her husband was deployed to Korea and she remained in Japan, Earle worked in the Office of Military Special Services. She had the rather unique experience of helping set up and maintain a canteen to greet military personnel in transit from the states to the war in Korea, just a few hours away. With the battlefield only four hours away by plane, a community of American wives and children had not lived so close to an active battlefield since the Civil War.

Several years later, while stationed in Fort Bliss, Texas during the Vietnam War, Earle was commended by the Red Cross for helping establish one of the first lending ‘tideover’ closets in the country, where newly arrived families could borrow, without charge, essential goods they needed while waiting for their possessions to arrive on the base.

Even more importantly, however, her skills and her experiences in UVA’s classroom gave her the confidence to embrace the constant changes and challenges that come with an international military career.

After living abroad for much of her life, Earle has returned to Charlottesville where she worked as a realtor and continued volunteering with civic organizations, work that did not go unnoticed.

After her retirement, she was honored by the Charlottesville Area Association of Realtors and inducted into their Hall of Fame for her years serving as their treasurer. She was also the first recipient of the lifetime achievement award from the Albemarle County Republican Committee.

Throughout her adult life, Earle has remained involved with the McIntire School of Commerce and the University community.  She is a a big fan of UVA sports, particularly football and basketball. She has held season tickets and supported UVA athletics for more than 40 years and still loves attending games today. 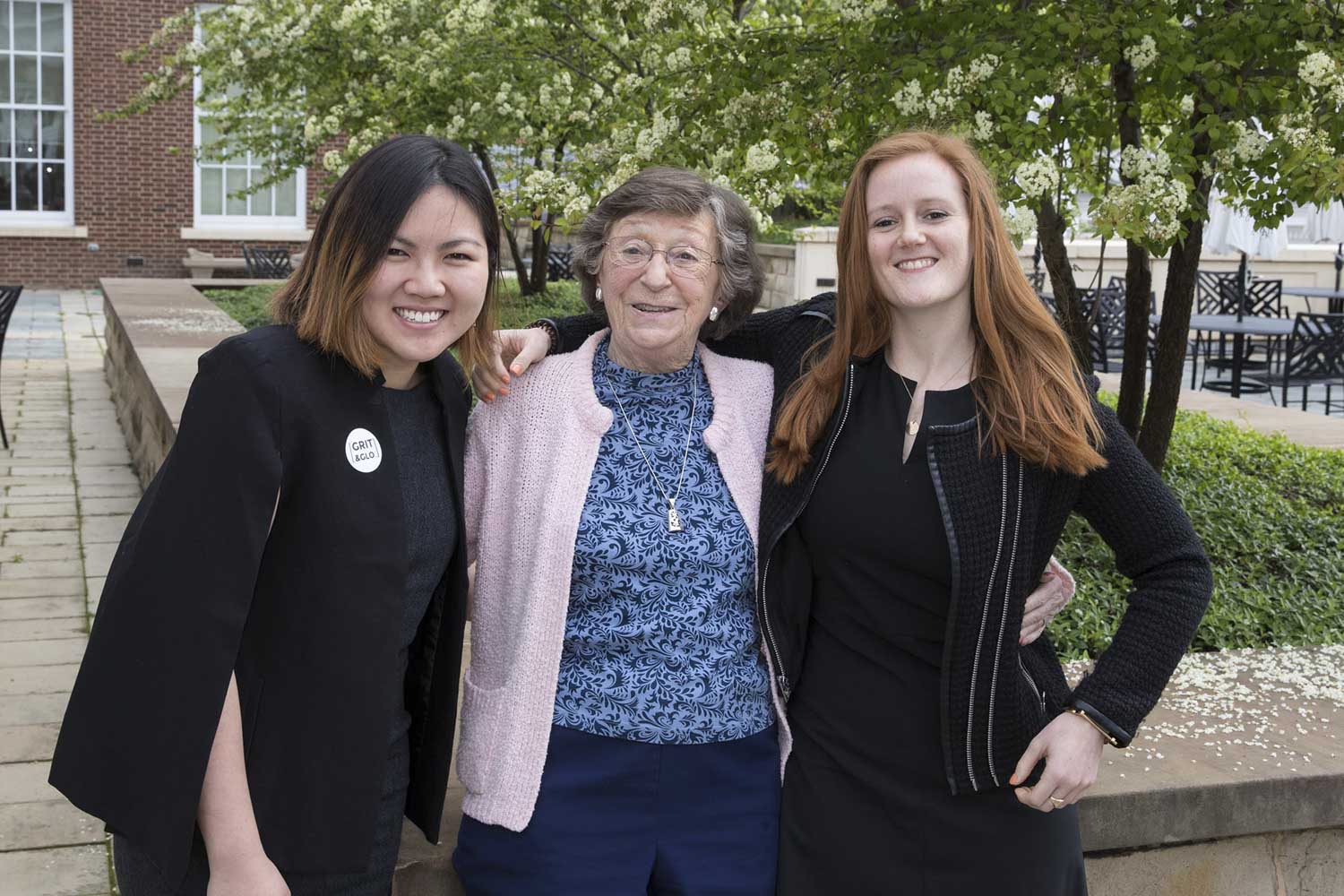 She has also raised generations of Wahoo fans, by taking her many grandchildren, nieces and nephews to UVA athletic events, teaching them the Good ‘Ole Song and the “Wahoowa” chant. Two of her sons are UVA graduates, and granddaughter Cameron Boland graduated from the Commerce School in 2015 and currently works for an executive search firm, Henkel Search Partners, in New York City. She loves sharing UVA with her “Grammy Pat” and so many other members of her family.

“It’s been a huge part of our entire family,” Boland said. “There is also a Virginia Tech contingent, of course, but my family will always be a very devoted group of Wahoos.”

With Boland and other family members gathered around her in the library that day, Earle said it had been a pleasure to visit the school again and talk to students and young alumni – particularly women like Felicia.

“A lot has changed, and for the better,” she said.

She turned to Felicia, smiling at the young woman.

“I am so proud of the way things have turned out,” she said. “The school is much richer for having all of you here.”

Here Is What You Need to Know About the New Coronavirus Variant, Omicron END_OF_DOCUMENT_TOKEN_TO_BE_REPLACED

Fall Is in the Air on Grounds END_OF_DOCUMENT_TOKEN_TO_BE_REPLACED

Meet the Cats and Dogs Your CVC Donation Supports END_OF_DOCUMENT_TOKEN_TO_BE_REPLACED