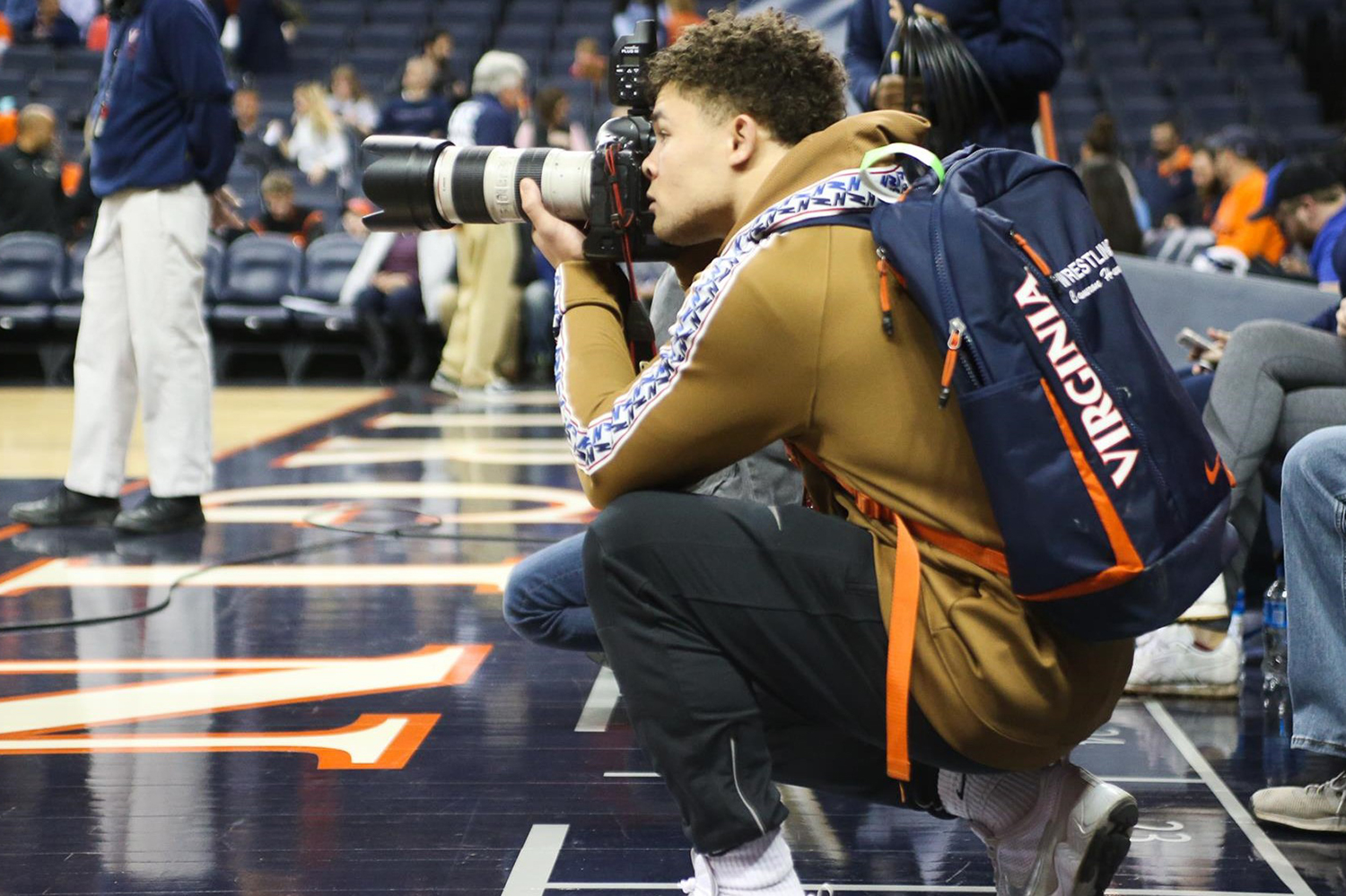 He’s still listed on the University of Virginia wrestling roster, and you can still find him on the floor at Memorial Gymnasium for dual matches.

But fourth-year student Cam Harrell won’t be wearing a singlet. He’ll be in street clothes, with a camera in his hands. An African-American and African studies major, Harrell is also a photography intern in the UVA athletics department.

Harrell, a graduate of McDonogh School near Baltimore, arrived on Grounds in the summer of 2015 as an acclaimed wrestling recruit. In 2015-16, he posted a 10-7 record while competing independently in college tournaments while officially red-shirting, and his promise in the sport was undeniable. But he hasn’t competed for the Cavaliers since Jan. 13, 2017, when as a redshirt freshman he suffered a concussion during a match at the Virginia Duals in Hampton.

It wasn’t his first one. Harrell had several concussions in middle school and high school, followed by four at UVA, the final one coming in Hampton against North Dakota State University’s Andrew Fogarty.

Harrell injured himself while executing a suplex, a throw in which a wrestler tries to slam his opponent down on the opponent’s back. Video of Harrell’s throw went viral in wrestling circles.

“To put it in perspective for people who don’t know wrestling, he basically did a back flip with a guy on his chest,” Cavalier head coach Steve Garland said. “That’s how athletic it was. But what nobody realized is that when Cam did it, he knocked himself almost unconscious.”

Harrell, who’s from Arnold, Maryland, near Annapolis, missed the rest of the 2016-17 season. (He’d posted a 7-6 record at 165 pounds.) He tried to return in 2017-18, but due to his ongoing concussion symptoms, UVA’s medical team would not clear him to compete.

“I went through preseason, and it wasn’t really working out,” Harrell recalled. “As good as I wanted to feel, you can’t push through lingering symptoms. They just don’t go away. While they may not be as bad as they were a while ago, it doesn’t take much to spark that up and for it to go from, ‘I’m not 100 percent, but I feel all right,’ to ‘I feel bad for days at a time.’”

His symptoms? “It was headaches. It was nausea. Class was difficult. I was just spacing in class,” Harrell said.

With his competitive wrestling career over, Harrell felt adrift. He’d picked up the sport when he was a young boy, and it had become his identity in many ways.

“It’s such a long process to get to where I’m at now, just based on having concussion after concussion,” Harrell said. “The time you spend [sidelined], that’s less time you spend being able to bond with your teammates, who are grinding every day, and you’re sitting there with your concussion. It’s a different type of injury, and it does cause a lot of mental stress on you. When I actually got retired, it was unfortunate. I separated myself a lot from the team, from wrestling, from the culture. And also, the guys on the team, they didn’t know what to say to me, either.”

Attending UVA’s duals in 2017-18, Harrell said, was difficult for him, “because you see guys wrestling in the spot that you would be in. Not that I didn’t always wish the best for these guys and cheer them on, but I missed that competitive aspect.”

It’s no longer as hard on him, Harrell said. “Photography has helped me, I would say, fall in love with the sport again.”

For Garland, who’s in his 13th season as head coach at his alma mater, seeing Harrell with his camera sparks mixed emotions.

“One is, I’m so happy he’s happy,” Garland said. “He’s really found his calling in that art, and he’s so at peace and he’s so happy when he’s doing it, so you just smile and you’re happy for a guy that you care about, because let’s face it, a lot of athletes struggle with their identity. They have an identity crisis when injuries happen.

“I always tell my guys, ‘Wrestling is what you do. It’s not who you are, because if that’s all you are and it gets taken away, then what do you have?’ So it’s nice to see that he’s really found something that makes him happy and it’s such a cool thing for everybody, because his pictures are great.

Harrell said his mother encouraged his interest in photography.

“She would always take pictures at my wrestling matches and my football games,” he said, “and then whenever my brother would wrestle or I’d be at one of his tournaments, I’d always grab the camera from her.”

He took a class in high school that piqued his interest in photography. Not until after he suffered his final concussion at UVA, however, did Harrell begin to seriously pursue his passion.

“I had a friend who goes to Morgan State [University, in Baltimore] and was kind of in the fashion department over there,” Harrell said. “So when I was home over break, I borrowed my mom’s camera and went and took pictures for him, and then she let me take the camera back to school.”

In the wrestling room at Onesty Hall – the program has since moved to Mem Gym – Harrell began shooting his teammates, who would post the pictures on their Instagram accounts, and he took photos to help a friend who was trying to start a clothing line. Harrell realized he was hooked.

“I really like this thing,” he told himself. “I want to further it.”

Physically, Harrell is fit – he still weighs around 165 pounds – and deals with few ill effects from his concussions.

“But I know I can’t expect to push myself like I used to, on a daily basis, when I’m working out,” he said. “It’s hard for me to just kind of step in the weight room or go for a run, because I’m so used to a style of training, and nothing compares to wrestling. And so to kind of get back in my comfort zone of where I like to be, where I like to work out, it’s taken a while to kind of figure that out.”

At UVA, he’s taken classes that focus on photography, and he started working in the athletics department, helping multimedia designer Lauren Taylor, last spring. In the fall, he became a photography intern after Bill Bunting, who coordinates media relations for wrestling, learned that Harrell had been taking photos of his teammates and their matches.

Harrell’s supervisor is Matt Riley, the department’s head photographer. Most of Harrell’s assignments have been for wrestling, but he’s also shot other sports, including football, tennis, basketball, volleyball and soccer.

The department’s other photography interns are Cayla Eason and Emma Sharon, who’s also on the rowing team.

“He’s a great kid,” Riley said of Harrell. “One of his strengths is the fact that he’s competed in the sport and has an athletic background, and because he’s also a student-athlete, he does a good job of getting shots behind the scenes.”

Harrell, who lives with teammate Corbin Allen, remains a valued presence in the wrestling program.

“I don’t get to see him as much as I’d like, but he stops by and we still have really good talks, all about life stuff,” Garland said. “When he first started going through this concussion thing, we started meeting once a week and I started mentoring him. And now we meet probably once a month and just chat.

“He cares about our team. He’s tried to help out younger guys. We set up a meeting at the beginning of the year where he got to talk to the younger group about making mistakes and how as a freshman you have to be extra careful. So he’s been a really productive member of the team, even though he’s not competing.”

One of the first wrestling events Harrell photographed was the Southern Scuffle in Chattanooga, Tennessee, in January 2018.

“I was up in the stands trying to take pictures,” Harrell said, shaking his head at the memory.

His vantage point later improved considerably. UVA teammate Michael Murphy’s father, Pat, a former Chattanooga wrestler, had a press pass that he lent to Harrell for the finals.

“I got to sneak on the floor and sit with the big photographers of college wrestling, and they had these huge lenses, all these setups, and I’m sitting there with a Nikon D3400,” Harrell said, laughing.

As an intern, he has access to bigger and better equipment, and Harrell’s skills have improved too. He hopes to pursue a career in photojournalism after graduating from UVA in May. For now, he’s happy to have found a niche in the sport he loves.

“It’s been a rocky road, me and wrestling,” Harrell said. “Photography has kind of helped me take my mind off of the idea that I wish I was competing. Instead, I’m able to look at wrestling in a different light, with a different perspective. It’s given me, one, a lot of respect for the art of the sport, and, two, just a lot of respect for the kids who are still doing it, and the kids who are able to stay healthy and push through all their injuries and all their distractions.”