Zebrafish Lab Provides Insights Into Diseases of the Nervous System 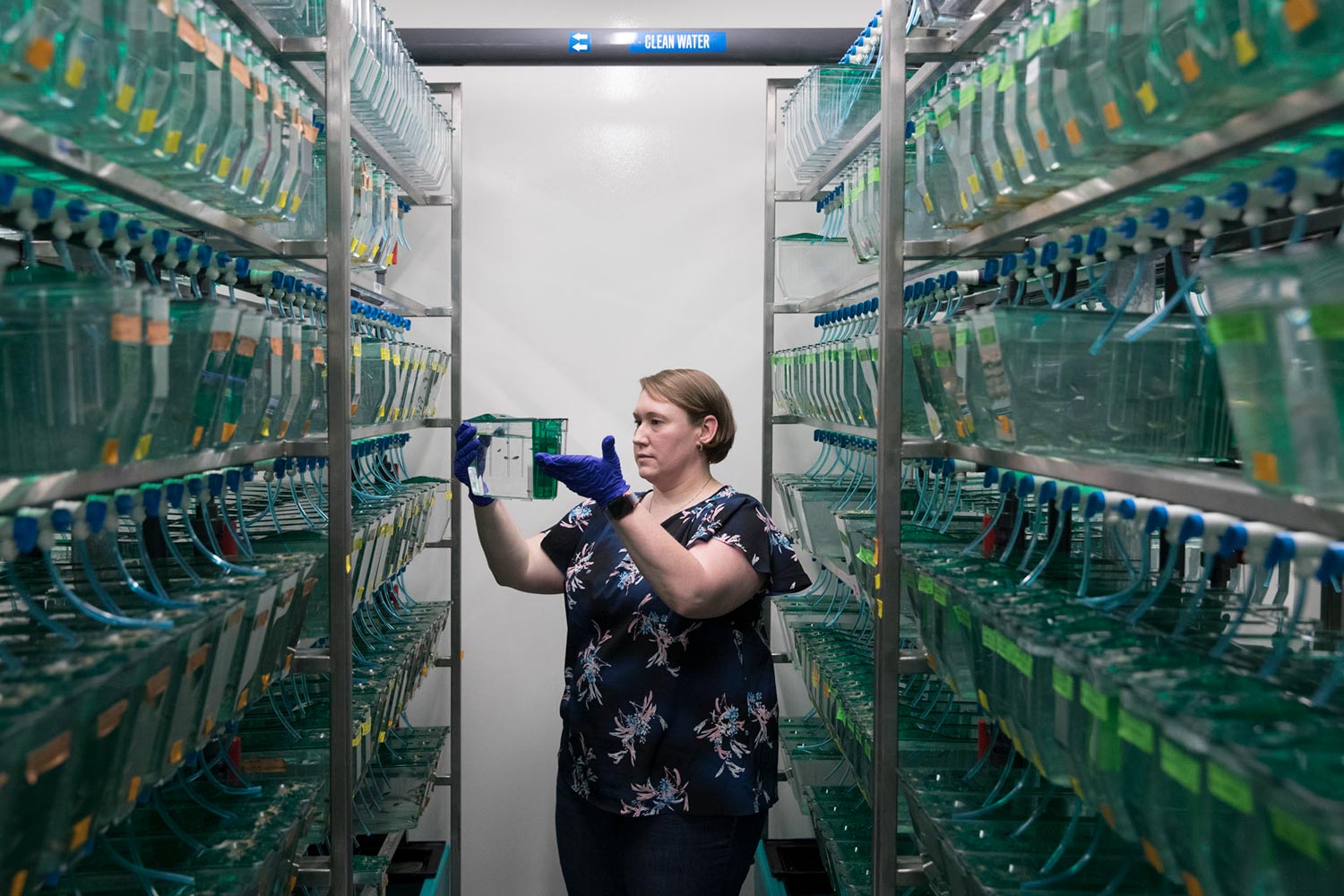 Kucenas describes science as akin to shining a flashlight on a space in the dark and seeing what’s there, and then shining the light on what’s beyond the original arc of light. She wants to know what’s there and beyond, and she says she’s stubborn in her quest to find answers where others have failed – or haven’t bothered to look.

As a grad student at Saint Louis University, Kucenas became interested in a type of nerve cell called “glia,” because so little was known about it at the time. Much more is known now, thanks to years of research by Kucenas and her grad students and postdoctoral fellows, shining light on the intimacies and intricacies of cells that are central to the proper functioning of our bodies.

Named after the Greek word for “glue,” glia hold together brain matter, and are key components in the development of the central and peripheral nervous systems. The cells also are important to the regeneration or repair of these systems in response to disease or injury. What Kucenas and her colleagues learn about glia could lead to the development of drugs that could help the nervous system repair itself, and has implications for the treatment of such childhood neurodegenerative diseases as muscular dystrophy, Charcot-Marie-Tooth disease, multiple sclerosis, autism and bipolar disorder, all of which involve defects of the glia.

During her nearly nine years at UVA, Kucenas has won more than $5 million in research funding from the National Institutes of Health, The Hartwell Foundation, the March of Dimes and others.

“Historically glia has been under-studied and under-appreciated for its role in so many of these diseases,” Kucenas said. “We are now beginning to increase our appreciation of the role of glia in development and regeneration through further study.”

Kucenas uses zebrafish as her study model, as about 80 percent of the genes involving the nervous system in these fish – native to the Himalayan region and frequently kept in aquariums – are the same as in humans.

“The zebrafish nervous system has a direct link to the human nervous system; the cells are genetically identical,” Kucenas said. “We can mutate genes in the fish to mimic human diseases and watch the biology as it happens.”

Most helpfully, the fish are nearly transparent. Researchers anesthetize the fish, place them under a microscope, and observe, in real time in a living organism, glia and other nerve cells as they migrate and interact. These activities also are video-recorded, allowing researchers to repeatedly study cell interactions, make comparisons and look for meaningful patterns that reveal the intricacies of how the central and peripheral nervous systems work together. Kucenas’s lab has gained several insights previously unknown, including the discovery of two new cell types; the realization that glia migrate from the central nervous system to the peripheral nervous system; and that, like other cells, glia communicate with one another.

Kucenas believes that these insights will lead to ways to reverse diseases through targeted therapies. As an example, she is learning that in muscular dystrophy, which has long been believed to be a muscle-wasting disease, the problem first begins as a nervous system developmental problem that then leads to muscle wasting.

“We’re looking at ways to make this muscle loss slow down by focusing on reversing damage to the nervous system,” she said.

Kucenas’s fish facility recently expanded in size by 50 percent, thanks to funding from the College of Arts & Sciences. It now includes its own water-treatment plant and can house up to 50,000 fish and hundreds of tanks in a 1,300-square-foot area, allowing Kucenas and her staff to “really ramp up the research.” Kucenas’s researchers now have plenty of fish to study.

“I am very proud of the 16 functioning scientists we have in this lab, at all levels from postdocs to undergrads,” Kucenas said. “Everybody is a contributor.”

She said some of her undergraduate students stay at UVA through the summer to gain hands-on research experience, full-time.

“Some of my students will go on to medical school, and some will go on to grad school to continue doing science,” she said. “This is a great opportunity for them to participate in Research 1-level, federally funded science.”

And, she added, “I’m successful as a scientist because I am able to recruit amazing, dedicated people who trust me in their training. Everything good that has happened to me is because of them.”

A Year We Will Never Forget: 2019-20 in Review END_OF_DOCUMENT_TOKEN_TO_BE_REPLACED

‘What Will You Carry With You?’ Remarks From UVA President Jim Ryan END_OF_DOCUMENT_TOKEN_TO_BE_REPLACED