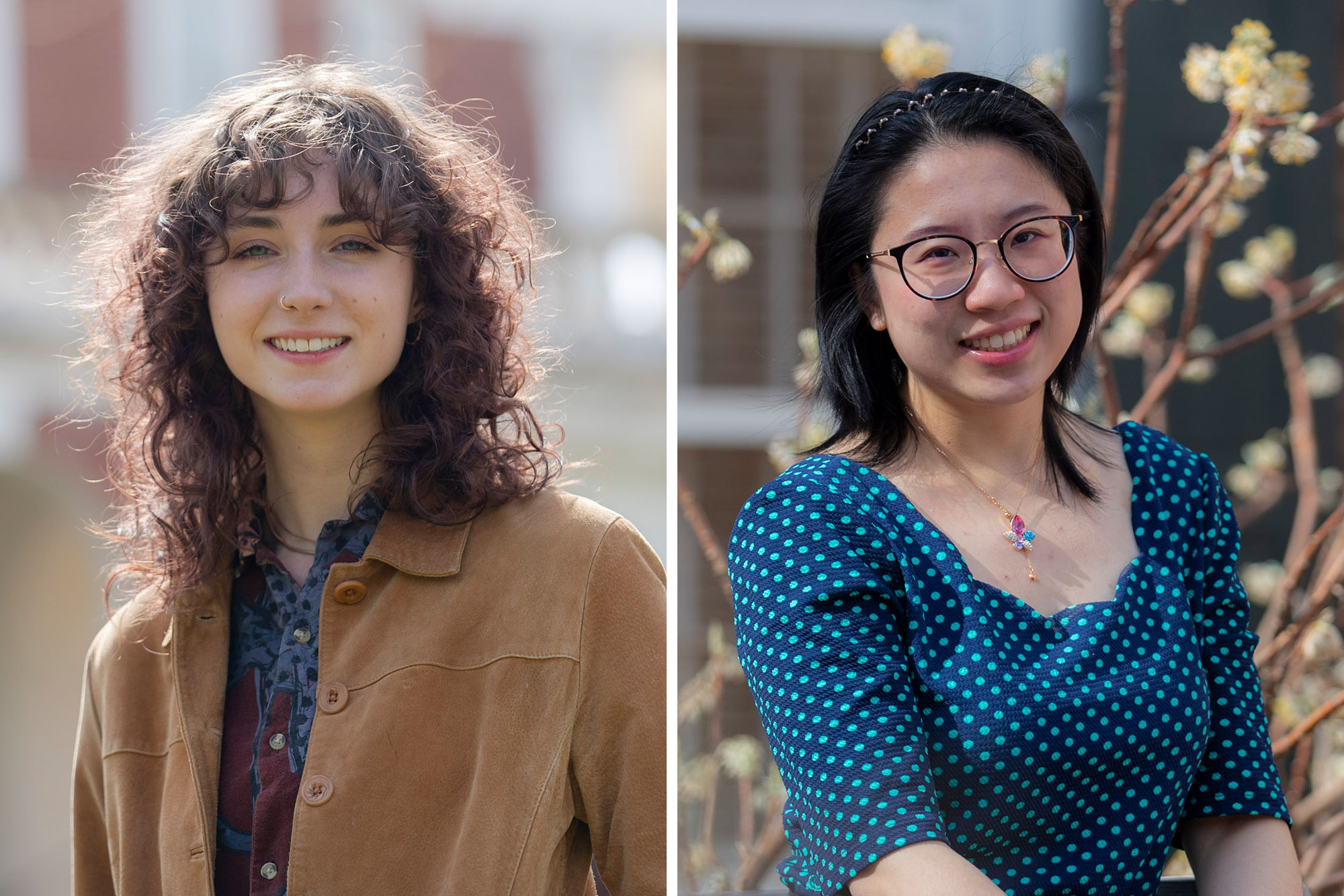 Goldwater Scholars are selected based on their commitment to research, effective display of intellectual intensity and potential for a significant future contribution in their chosen field in the natural sciences, mathematics or engineering. Each Goldwater Scholar annually receives funding for tuition, mandatory fees, books, and room and board, up to a maximum of $7,500 per full academic year.

“We are thrilled that Zhiwen and Theo have been named Goldwater Scholars,” said Andrus G. Ashoo, director of UVA’s Office of Citizen Scholar Development. “It is a testament both to their development as researchers and to their hard work in learning to communicate well to various scientific audiences.

“Melissa Hey was the primary adviser for all of our Goldwater nominees this year and did a fantastic job of supporting them.” 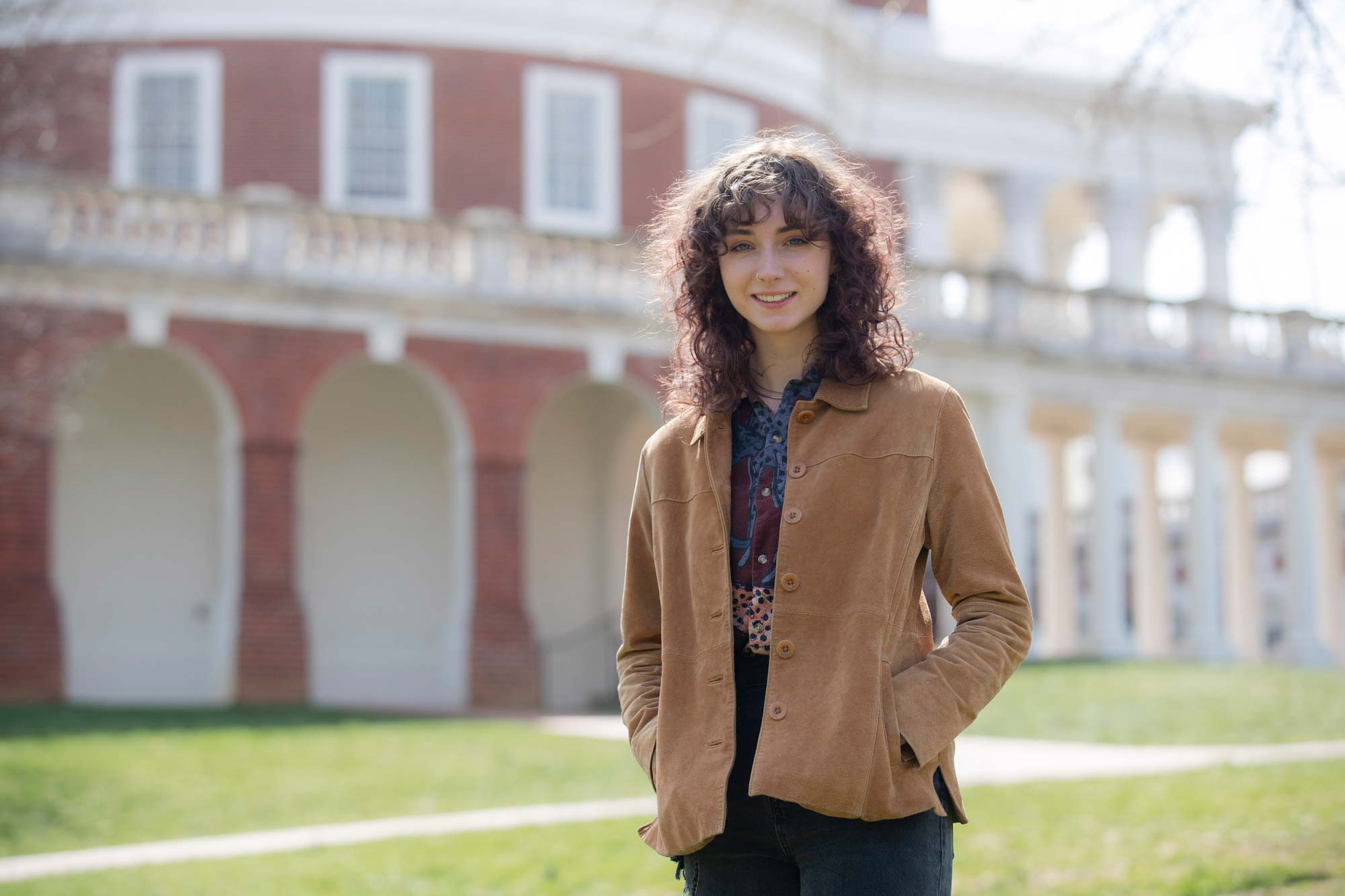 Theo O’Neill is currently researching the progression of star formation in nearby dwarf galaxies.

O’Neill, an astronomy physics and statistics double major from Tiburon, California, conducts research into star formation and applications of statistics to astronomy.

“I am particularly interested in the relationship between young stars and the clouds of molecular gas that they form within,” O’Neill said. ”My research currently involves studying the progression of star formation in nearby dwarf galaxies, which are interesting because their chemical compositions are similar to the conditions of the early universe. By studying molecular cloud structure in these areas, we can improve our understanding of how stars form in extreme environments.”

“This experience inspired me to study astronomy in college and I am so grateful for having had the opportunity,” they said. “My advisers at UVA have been incredibly supportive and have fostered my interest in star formation, the interstellar medium and data science. I think the complex interplay of physics involved in these processes is fascinating, and I enjoy the creative aspect of exploring applications of statistics and data science to my work that I’m able to incorporate.”

So far, O’Neill’s research has included an analysis of likely triggers for star formation in another galaxy, a statistical study of the masses of molecular clouds in our own galaxy and an evaluation of physical processes that can bias the observations of molecular clouds.

“I mainly work with data from the Atacama Large Millimeter/sub-millimeter Array [in Northern Chile] and the Hubble Space Telescope [in low Earth orbit],” they said. “I hope my research will contribute to our understanding of the relationship between young stars and the clouds of molecular gas from which they form, and to the process of star formation in general in environments very different from our own.”

Astronomy professor Remy Indebetouw said O’Neill has “exceptional scientific insight and programming skills” for someone so young. O’Neill has been working with the professor on several problems related to star formation.

“Astronomers know that stars form from interstellar gas clouds, but the details remain to be worked out about what kinds of stars are likely to form from a particular observed gas cloud,” Indebetouw said. “Theo began with analysis of gas clumps in one of our neighbor galaxies, but in the process of figuring out how to interpret those data, we realized that a quantitative model for gas clumps in such environments had not been published, so [O’Neill] switched gears from analyzing telescope measurements, and added a second paper on the theoretical models.”

O’Neill’s work in statistics is instrumental in their astronomy, Indebetouw said.

“In my research, we can’t perform experiments under controlled conditions and so are limited to what we can infer from observations,” O’Neill said. “This makes statistics a key part of harnessing the full potential of the data we do have.

“Additionally, new telescopes and large surveys are generating larger volumes of data on a nightly basis than ever before. The field is adapting to take full advantage of the opportunities this presents through an increased focus on data science.”

Through this work, Indebetouw said, they have learned several interesting things about star formation and how astronomers interpret – or may misinterpret – observations of star-forming gas.

“Theo is enthusiastically studying astro-statistics, which is a major growth area as astronomy moves toward larger and larger surveys and datasets,” Indebetouw said. “Theo is smart and perceptive and, risking an astro-pun, I expect that the future will be stellar.”

Hey, the assistant director in the Office of Citizen Scholar Development, agreed O’Neill has put in an enormous amount of hard work.

“Theo has done a lot of math through research,” Hey said. “Nowhere was this more apparent than in the research essay for the Goldwater, which was at first incredibly dense, but it also communicated just how much programming and statistical skill Theo possesses. When I met with Theo, I came prepared with questions I had to better understand the statistical analyses. Statistics can be tricky to explain, but Theo walked me through their objectives, methods and rationale and outcomes.

“Theo’s growth moment came in the form of understanding how to make their research accessible to others in writing. At the end of the process Theo was able to communicate advanced mathematical concepts to a general audience, and I was impressed by how easy it was to read their final research essay. Theo cares deeply about engaging in the scientific conversations happening in the field and is now more prepared to share that conversation with people outside of it.”

“This scholarship will provide support for me to continue to work toward my professional goals and grow as a researcher,” they said. “I’m also excited to connect with other Goldwater Scholars.” 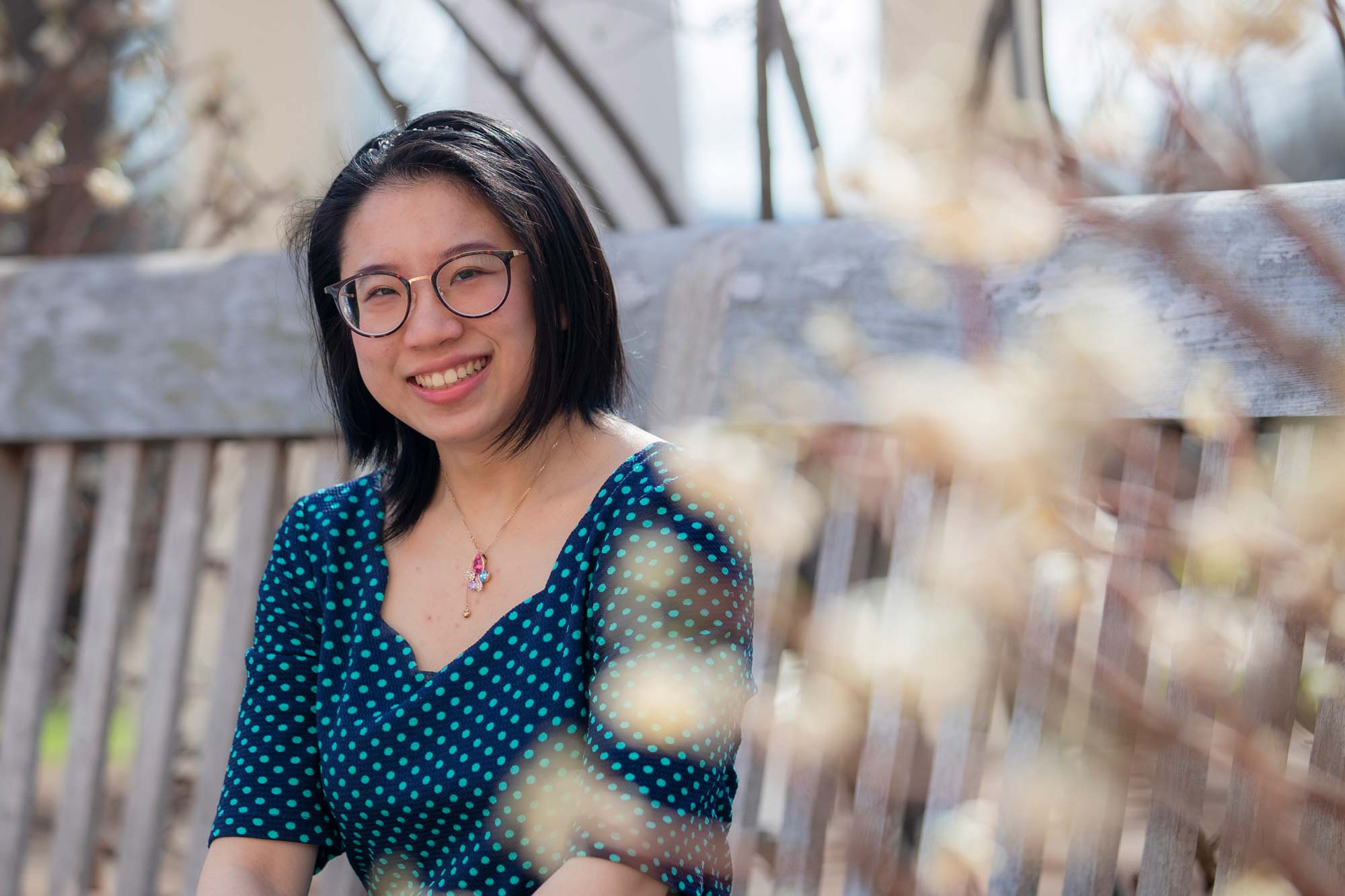 Zhiwen Xu merges the scientific exploration of biochemistry with the self-expression of art.

Xu, a biochemistry and studio art double major from Hangzhou, China, and Fayetteville, Arkansas, focuses her scientific research on diabetes and metabolic diseases.

“Diabetes is one of the world’s fastest-growing chronic diseases,” Xu said. “This disease has affected many of my close relatives and friends. It is important to learn the mechanism pathways behind Type 2 diabetes and how one can target specific genes to treat it.”

Xu seeks to understand the genetics involved in metabolic diseases on a molecular level.

“Zhiwen is very hard-working, very curious about the science we are doing and has impressed everyone in the lab,” said Mete Civelek, an associate professor of biomedical engineering in UVA’s Center for Public Health Genomics. “She joined my laboratory in the fall 2019 semester as part of the Undergraduate Student Opportunities in Academic Research Program. I believe she has great potential to be an outstanding medical scientist.”

Science and art influence each other in many of Xu’s projects. “I incorporated the creativity and imagination from art into my science projects, whether in finding new ideas or in finding approaches to solving scientific problems,” Xu said. “Art trained me to observe and discover easily overlooked things.”

Well-designed figures and STEM videos have helped Xu to understand complex scientific concepts, and the student has used her art to express ideas to her colleagues.

“Digital visualization technology can be a powerful tool in extending further understanding of our world and science, including explaining how we could treat a disease or how diet or genetics affect the susceptibility toward disease,” Xu said “Similarly, I will incorporate my scientific knowledge into my artwork to raise awareness to a pressing societal issue or popularize scientific knowledge.”

In her artwork “Cell City,” Xu visualizes regression in cell development as a way of demonstrating the progress of getting sick or becoming feverous.

“The idea of fever is not limited to a person getting sick; it can also be applied to a broader concept – for example, a whole world is getting ill from coronavirus,” Xu said.

Xu received a Harrison Undergraduate Research Grant as a first-year student after being in Civelek’s lab for only a few months, working with postdoctoral fellow Qianyi Yang on a project about the molecular characterization of mice. When the laboratory ramped down research due to COVID-19, Civelek created a remote computational project for Xu.

“She taught herself imaging software and analyses with Coursera classes,” Civelek said. “I was very impressed by her determination.”

In her artwork “Cell City,” Xu depicted fever through the scientific concept of cell development. (Artwork by Zhiwen Xu)

Based on Xu's research work, along with other lab members and mentors, the final findings were published in the Diabetes journal. “In her work so far, Zhiwen has demonstrated that she enjoys science and works hard to achieve her goals,” Civelek said. “In a short period, she has become independent. She has an excellent rapport with everyone in the lab. We enjoy having her there and she is a joy to work with. She is a fast learner and takes research opportunities seriously.”

Xu also hopes to promote and share her skills learned from the lab with others. With two other undergraduates, she founded the Genomics Society at UVA, which promotes undergraduate research and seeks to equip members with the skills needed for biological research. She has taught workshops on cell culture, mice models, and wet-lab techniques to UVA undergraduates and high school students.

Xu is also co-president of Mind & Body at UVA, a student group supporting healthy living, self-exploration and connection through contemplation. She is the culture chair of the Taiwanese Student Association at UVA.

“Zhiwen is engaged in a lot of different activities, but the underlying themes in her involvements are her artistic creativity, her research itself and making science broadly accessible and interesting to a lot of people,” said Hey of the Office of Citizen Scholar Development. “As we talked about why she chose the extracurriculars she did, and why she cared about them, it became increasingly clear, to her more than anyone, that her artistic interests and her research interests in STEM were not as incongruous as she first thought.

“Zhiwen’s growth moment came in the form of self-reflection and understanding. She cares deeply about finding ways to engage people through research and art, and I think she is more aware of that in herself now.”

Xu plans to dive into the field of molecular medicine, pharmacology and physiology, and she wants to continue researching gene interaction within human bodies and find solutions to cure and lower the occurrence of inflammatory diseases.

“I am incredibly honored and grateful to be recognized among all the candidates. But more importantly, I am extremely thankful to all the mentors and everyone at UVA who has helped me,” Xu said. “They have provided tremendous support and a platform of opportunities to help me pursue my science journey. I felt fortunate to have been able to learn from so many brilliant researchers, professors and administrators.”

When Less Is More: How Harnessing the Power of Subtraction Can Add to Life END_OF_DOCUMENT_TOKEN_TO_BE_REPLACED