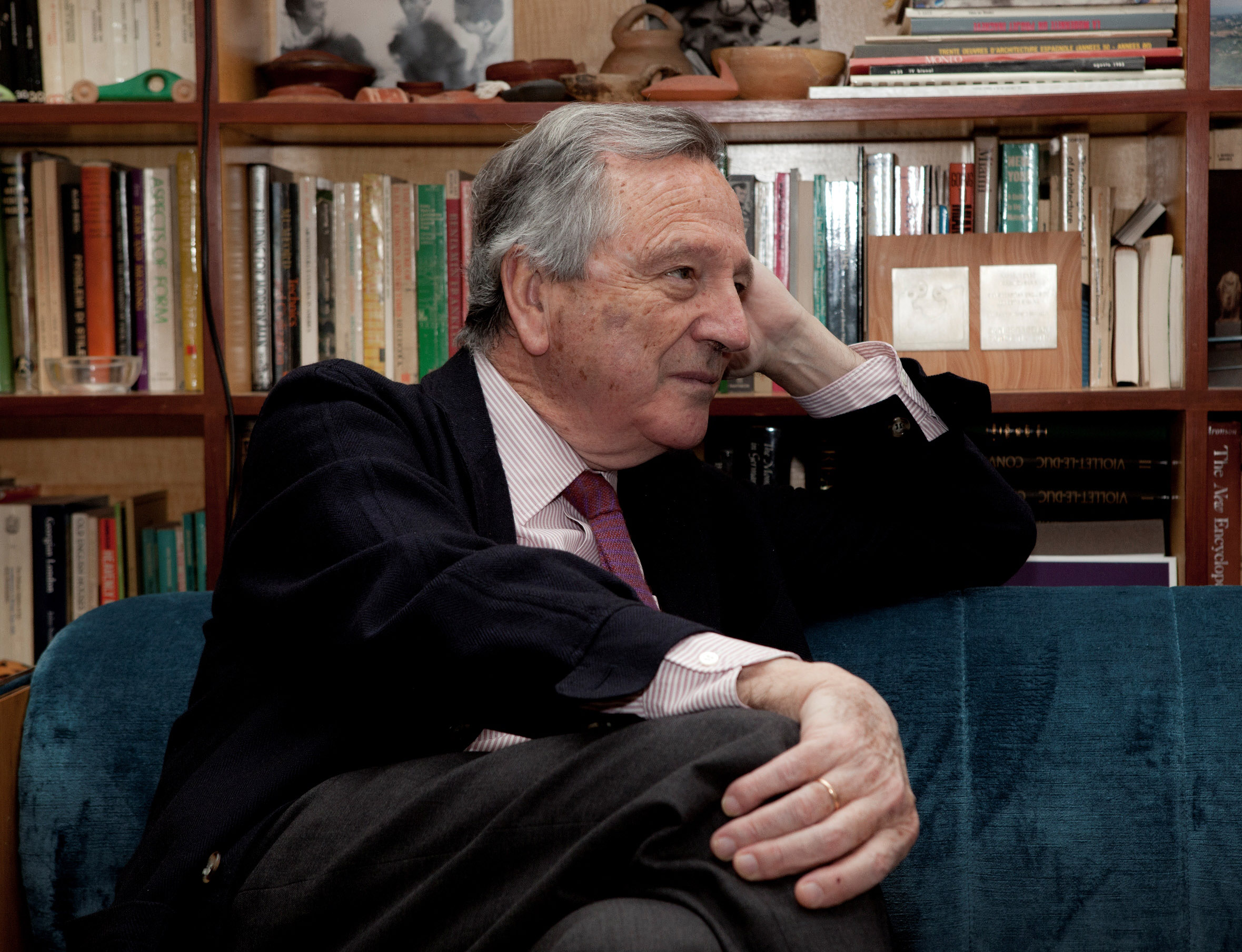 The awards are presented jointly on April 13 – Jefferson's birthday – by U.Va., which he founded in Charlottesville in 1819, and by the Foundation, the independent, nonprofit organization that owns and operates his home, Monticello.

• George Mitchell, former U.S. senator and statesman who brokered a peace accord in Northern Ireland, will receive the 2012 Thomas Jefferson Foundation Medal in Law.

The Thomas Jefferson Foundation Medals are the highest external honors bestowed by the University, which grants no honorary degrees. They recognize achievements of those who embrace endeavors in which Jefferson, author of the Declaration of Independence and third U.S. president, excelled and held in high regard.

"This year's medal recipients have each in their own way made the world more beautiful, secure and environmentally safe through their hard work and scholarship," U.Va. President Teresa A. Sullivan said. "The Thomas Jefferson Foundation Medals, now in their 46th year, celebrate these leaders, all of whom have dedicated their talents to the public good."

The medals, struck for the occasion, will be presented by Bowman and Sullivan at a luncheon in the Dome Room of the Rotunda. The recipients will be honored at a dinner at Monticello on April 12, and each will give a public talk.

Museums, congress centers, town halls, railroad stations and even factories have been made more beautiful by Rafael Moneo, the renowned Spanish architect who, it has been said, "succeeds in creating a balance between tradition and innovation."

Moneo divides his professional life as an architect between teaching and practice. In both, he assumes a critical attitude toward the trend of short-lived architecture and seeks to emphasize the importance of buildings as enduring monuments to society.

"Architecture only reaches its true status when it is realized, when it acquires its being as an object, and when it is transformed into material reality as a building," he says.

Kim Tanzer, dean of U.Va.'s School of Architecture, said Moneo's legacy, as both a practitioner and an educator, cannot be overstated. "His ongoing life's work continues to inspire architects around the world," she said.

"Rafael Moneo's clear, persistent architectural vision – respectful of historic contexts, yet utterly of the present – first came to the attention of the international community as an antidote to the excesses of post-modern historicism," Tanzer said. "Later, as chair of the Harvard Graduate School of Design's Department of Architecture, he went on to provide leadership for several generations of architects and academics, grounding their studies in a thoughtful and poetic material sensibility."

José Rafael Moneo Vallés, 74, was born in Tudela, Spain. He obtained his architectural degree in 1961 from the School of Architecture in Madrid, then worked with Danish architect Jørn Utzon and studied at the Spanish Academy in Rome before opening his own practice in Madrid.

Among his best-known works in Spain are the Museum of Roman Art in Mérida, the Kursaal Congress Center in San Sebastian, the Pilar and Joan Miró Foundation in Palma de Mallorca and the Atocha Railway Station in Madrid.

His most prominent U.S. works include the Cathedral of Our Lady of the Angels in Los Angeles, the Audrey Jones Beck Building at the Houston Museum of Fine Arts, the Davis Art Museum at Wellesley College, and more recently the Laboratory for Integrated Science and Engineering at Harvard University, the Chace Center at the Rhode Island School of Design, and the Northwest Corner Building at Columbia University.

Works currently under construction include the Princeton University Neuroscience and Psychology Building and the Center for Contemporary Art de la Universidad de Navarra.

Moneo is also a noted theorist, critic and teacher. His scholarly work includes numerous and widely published articles and lectures. He has taught architecture at various sites around the world, and from 1985 to 1990 served as chair of the Harvard Graduate School of Design, where he is the first Josep Lluís Sert Professor of Architecture.

He was the first Spanish architect to be awarded the Pritzker Architecture Prize, often referred to as the profession's highest honor, in 1996. He is also the recipient of numerous additional awards, including the Gold Medal by the Spanish government, the Arnold W. Brunner Memorial Prize by the American Academy of Arts and Letters, the Prince of Viana Prize (Spain), the Swedish Schock Price for the Visual Arts and the Royal Institute of British Architects Gold Medal.

The School of Architecture will host a public talk by Rafael Moneo on April 13 at 3 p.m. in Old Cabell Hall Auditorium.

Former U.S. Sen. George J. Mitchell, a former majority leader known for efforts to broker peace in Northern Ireland and the Middle East, is the ideal Jefferson medalist, according to Paul Mahoney, dean of the U.Va. School of Law.

"Like Jefferson, an intellectual, a leader, a legislator and a diplomat, Senator Mitchell has served the nation in many capacities but always with judgment, wisdom and fair-mindedness," he said.

Mitchell, 78, most recently served as special envoy for Middle East peace under President Obama, a role in which he led American efforts to advance Israeli-Palestinian peace negotiations. When Mitchell stepped down in May, Obama said in a statement that Mitchell was "a tireless advocate for peace."

"His deep commitment to resolving conflict and advancing democracy has contributed immeasurably to the goal of two states living side-by-side in peace and security," Obama said. "George told me when he took this job that he would put in a couple of years, and I'm so glad he did. He is – by any measure – one of the finest public servants that our nation has ever had."

Mitchell, a native of Maine, was one of five children born to George Mitchell Sr. and Mary Saad Mitchell. His mother was an immigrant from Lebanon and his father was the orphan son of Irish immigrants.

He graduated from Bowdoin College in 1954, served in the U.S. Army, and in 1961 received his law degree from Georgetown University after studying as a part-time student.

Prior to serving as the Obama administration's point person on Middle East peace, Mitchell had a long career in public service. In 2008, Time Magazine named him one of the world's 100 most influential people.

A Democrat, Mitchell entered the Senate in 1980 and went on to serve as Senate majority leader from 1989 until 1995. He led the 1990 reauthorization of the Clean Air Act, which included new controls on acid rain toxins, and wrote the first national oil spill prevention and clean-up law. He led the Senate in its passage of the first child care bill and was principal author of the low-income housing tax credit program. And he played a key role in the passage of the Americans with Disabilities Act, as well as the ratification of the North American Free Trade Agreement and creation of the World Trade Organization.

After leaving the Senate in 1995, Mitchell was named special adviser to President Clinton on Ireland and served as chairman of the Northern Ireland peace talks. Under his leadership, the negotiations resulted in the Good Friday Peace Agreement, which brought an end to decades of conflict. He documented his experience in "Making Peace," one of four books he has authored.

For his service in Northern Ireland, Mitchell received numerous awards and honors, including the Presidential Medal of Freedom, the highest civilian honor given by the U.S. government.

Mitchell chaired an international fact-finding committee on violence in the Middle East in 2000 and 2001. The committee's recommendation, known as the Mitchell Report, was endorsed by the administration of President George W. Bush, the European Union and other governments.

He led an investigation into the use of performance-enhancing drugs in Major League Baseball in 2006-07. He also was chairman of a special commission that probed allegations of impropriety in the Olympic Games bidding process. And he served as the independent overseer of the American Red Cross Liberty Fund, which helped victims and their families following the Sept. 11 terrorist attacks.

The School of Law will host a public talk by George Mitchell on April 13 in Caplin Pavilion. The time will be announced.

In the 14 years that Jessica T. Mathews has been at the helm of the Carnegie Endowment for International Peace, she has had an enormous impact on the world of international affairs.

Today, in addition to its Washington, D.C., headquarters, Carnegie has full-fledged research institutions in Moscow, Beijing, Beirut and Brussels. A new center is expected to open in India in 2013, and a new program for Central Asia has been established in Kazakhstan.

The Endowment runs websites in Arabic, Chinese and Russian as well as English. In Moscow, there are more than 40 Russians on the staff and one American. In Beirut and Brussels, the staffers are entirely Middle Eastern and European, respectively. In the 2011 think tank rankings by the University of Pennsylvania, every center was ranked in the top category for its region – a feat unmatched by any other institution.

This marks the second year that the Frank Batten School of Leadership and Public Policy has led the selection process for the citizen leadership medal, which was established in 2007.

"The medal honors private citizens who have exercised leadership in the public arena in a non-governmental capacity," Dean Harry Harding said. "One of the most important ways they can do so is through America's vibrant network of organizations that engage in research and advocacy on various areas of public policy."

Mathews, he said, has advanced the Carnegie's reputation for objective, influential, non-partisan analysis that provides insight into emerging transnational issues and explores collaborative solutions. "Many of the students and faculty at the Batten School share an interest in those issues," he said.

Before joining the Carnegie Endowment in 1997, Mathews worked in both the executive and legislative branches of government, in management and research in the nonprofit arena, and in journalism and science policy.

Mathews, 65, was born in New York City, the daughter of renowned historian Barbara Tuchman and Lester Tuchman, a researcher and professor of medicine. She holds a bachelor of arts from Radcliffe College and a Ph.D. in molecular biology from the California Institute of Technology.

She turned toward public policy during a one-year science fellowship in the office of U.S. Rep. Morris K. Udall. During that year, Udall began considering a run for the presidency, and Mathews wrote memos on campaign issues, from busing to amnesty to import tariffs. When Udall decided to run, she stayed on. "The long and short of it was that I never got back to the lab," she said.

From 1977 to 1979, she was director of the Office of Global Issues at the National Security Council, covering nuclear proliferation, conventional arms sales and human rights. As a member of the Washington Post's editorial board from 1980 to 1982, she wrote about such topics as arms control, energy, environment, science and technology. Later, Mathews wrote a popular weekly column for the Washington Post, which circulated nationwide and in the International Herald Tribune.

In 1982, she became founding vice president and director of research of the World Resources Institute and returned to government in 1993 as deputy to the undersecretary of state for global affairs.

Mathews was director of the Council on Foreign Relations' Washington program and a senior fellow from 1994 to 1997. While there, she published an article in Foreign Affairs, "Power Shift," selected by the editors as one of the most influential in the journal's 75 years.

The Frank Batten School of Leadership and Public Policy will host a talk by Jessica Tuchman Mathews on April 12 at noon in Garrett Hall.

Mathews will also be the featured speaker at Monticello's commemoration of Jefferson's 269th birthday April 13 at 10 a.m. on the West Lawn of Monticello. The celebration is free and open to the public.

A Year We Will Never Forget: 2019-20 in Review END_OF_DOCUMENT_TOKEN_TO_BE_REPLACED

‘What Will You Carry With You?’ Remarks From UVA President Jim Ryan END_OF_DOCUMENT_TOKEN_TO_BE_REPLACED