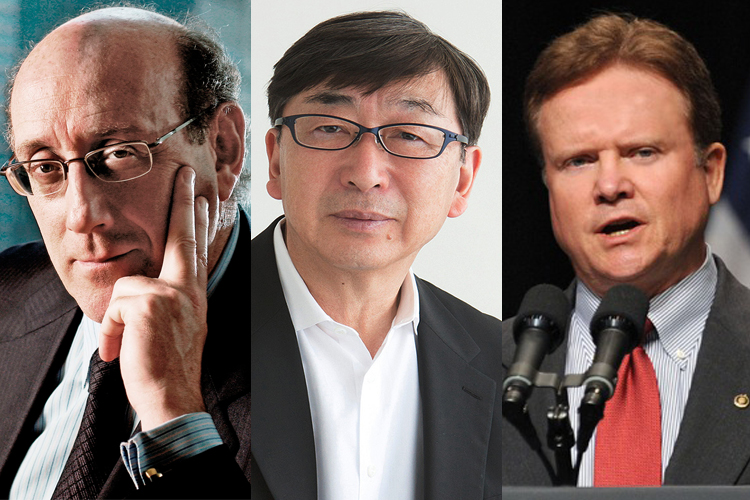 The awards are presented annually on Jefferson's birthday – April 13, known locally as Founder’s Day – by U.Va., which he founded in Charlottesville in 1819, and by the Thomas Jefferson Foundation, the independent, nonprofit organization that owns and operates his home, Monticello. This year, April 13 falls on a weekend, so the medals will be presented on Friday, April 11.

“These medal recipients have excelled in fields that are very different from each other, but they come together on this day because of the profound significance of their achievements,” U.Va. President Teresa A. Sullivan said. “A common denominator for all of them is their commitment to the public good.”

The medals are the highest honors bestowed by the University, which grants no honorary degrees.

“In many ways, Thomas Jefferson was the architect of American life,” said Leslie Greene Bowman, president and CEO of the Thomas Jefferson Foundation. “Our third president was not only the Enlightenment philosopher who wrote the Declaration of Independence, he was also a lawyer, scientist, architect, gardener, epicure, politician and diplomat. From our founding documents to the neoclassical style of the federal city, Jefferson shaped the new nation.

“We are pleased to honor the 2014 Thomas Jefferson Foundation medalists, who exemplify the best in their fields and who, like Jefferson, provide essential leadership for our world.”

Bowman and Sullivan will present the medals, struck for the occasion, at a luncheon in the Rotunda Dome Room. The recipients will be honored at a dinner at Monticello on April 10, and each will give a free public talk at U.Va. (Details below.)

Webb will also be the featured speaker at Monticello’s commemoration of Jefferson’s 271st birthday, on April 11 at 10 a.m. on the West Lawn of Monticello. The celebration is free and open to the public.

Ito has defined architecture as “clothing” for urban dwellers, a metaphor that distills Ito’s approach to design. “For me,” he said, “the task of the architect is to release people from… restrictive frameworks by creating spaces in which they feel at ease and in which they can attain some degree of freedom.”

According to Ito, his architecture seeks “to erase conventional meaning … through minimalist tactics, developing lightness in architecture that resembles air and wind.” These ideas of fluidity pervade his work, particularly the critically acclaimed Sendai Mediatheque (completed in 2001), a cube-shaped glass-walled structure whose floors are penetrated by 13 “tree-like” steel pipe superstructures that Ito calls “tubes,” which distribute the “energies” of light, air, water, sound and information throughout the building’s open floor plan.

Replacing the archetypal ideas of a public art museum or library housing a collection of paintings or books with “a completely new concept of architecture,” Ito named it a “mediatheque,” wherein an array of state-of-the-art electronic media can flexibly serve different cultural functions.

“At its best, architecture is alchemical, transforming the pragmatics of site, structure, program and enclosure into something never before experienced,” said Kim Tanzer, dean of the U.Va. School of Architecture. “It takes us beyond ourselves and helps us aspire to inhabit and contribute to a more evolved world. Toyo Ito’s work has this quality; both ethereal and utterly grounded, fantastical and practical, his architecture helps us to imagine new forms of human experience. His meaningful use of emerging digital tools, combined with his sophisticated deployment of non-Cartesian rationality, will inspire architects for generations to come.”

After studying architecture at the University of Tokyo, Ito worked in the office of prominent Japanese architect Kiyonori Kikutake until founding his own Tokyo-based office, Urban Robot (later renamed Toyo Ito & Associates), in 1971. Ito’s practice has completed a wide range of projects, from small-scale housing to seminal public works, including the temporary (2002) Serpentine Pavilion Gallery in London’s Hyde Park, the Tama Art University Library in Tokyo, and Taiwan’s National Stadium, built to host the 2009 World Games.

Ito has won numerous international awards, including the Royal Gold Medal from the Royal Institute of British Architects, the Architectural Institute of Japan Prize for the Sendai Mediatheque, the Golden Lion for Lifetime Achievement for the 8th Venice Biennale International Exhibition, and the 2013 Pritzker Architecture Prize, one of the discipline’s highest honors. His works have been the subject of museum exhibitions in nine countries.

Ito has also served as a visiting professor at the University of Tokyo, Columbia University, the University of California-Los Angeles, Kyoto University, Tama Art University and the Harvard Graduate School of Design. In 2011, he constructed the Toyo Ito Museum of Architecture on a small island in the Seto Inland Sea, which showcases his past projects and serves as a workshop for young architects.

The School of Architecture will host a translated public talk by Ito on April 11 at 3:30 p.m. in Old Cabell Hall Auditorium.

Feinberg has become America’s go-to arbiter of compensation funds for victims of national tragedies. One of the nation's leading experts in mediation and alternative dispute resolution, Feinberg has administered compensation funds for victims of the Sept. 11 terrorist attacks, the 2007 shootings at Virginia Tech, the 2010 BP oil spill in the Gulf of Mexico, the 2012 mass shooting in a movie theater in Aurora, Colo., and the 2013 Boston marathon bombings, among other assignments.

Feinberg is best known for serving as the special master of the federal Sept. 11 Victim Compensation Fund. In that role, Feinberg reached out to everyone who was qualified to file a claim, evaluated applications, determined appropriate compensation and disseminated awards. In 2005, he authored a book about the experience: “What is Life Worth?: The Unprecedented Effort to Compensate the Victims of 9/11.”

“Kenneth Feinberg’s career is a testament to the fact that a great lawyer can bring a sense of justice and fairness to even the most emotionally charged disputes,” said Paul G. Mahoney, dean of the U.Va. School of Law.

Following the April 16, 2007, shootings at Virginia Tech, Feinberg was appointed fund administrator for the Hokie Spirit Memorial Fund, which distributed roughly $8 million to those most profoundly affected by the tragedy.

In 2009, Feinberg was appointed by Treasury Secretary Timothy Geithner to oversee compensation of executives at companies that received federal bailout funds in the wake of the financial meltdown.

Following the 2010 Deepwater Horizon oil spill in the Gulf of Mexico, Feinberg was tapped by President Obama and BP to administer a $20 billion fund to pay claims to victims of the disaster.

And last year, he was appointed by Boston Mayor Thomas Menino and Massachusetts Gov. Deval Patrick to administer the One Fund Boston, which collected donations to help the families most affected by last year's Boston Marathon bombings that killed three and injured 264.

He also advised the Newtown-Sandy Hook Community Foundation, which distributed $7.7 million to victims of the December 2012 elementary school shooting in Connecticut.

In 2010, Feinberg recounted his experiences in his second book, “Who Gets What: Fair Compensation After Tragedy and Financial Upheaval.”

Feinberg earned his undergraduate degree from the University of Massachusetts in 1967 and his law degree from New York University in 1970. Following law school, he served as law clerk to Chief Judge Stanley H. Fuld of the New York State Court of Appeals.

He founded the law firm Feinberg Rozen in 1992. He has repeatedly been named one of the 100 most influential lawyers in the country by the National Law Journal, and was named the magazine's lawyer of the year in 2004.

The School of Law will host a public talk by Feinberg on April 11 at 10 a.m. in Caplin Pavilion.

Webb, former U.S. Senator from Virginia, has been a combat Marine, a counsel in the Congress, an assistant secretary of defense and Secretary of the Navy, an Emmy-award winning journalist and a filmmaker, and is the author of 10 books.

While in the Senate, Webb was selected to deliver the response to the President’s State of the Union address in 2007, and served on the Foreign Relations, Armed Services, Veterans Affairs, and the Joint Economic committees. He wrote, introduced and guided to passage the Post-9/11 GI Bill, the most significant veterans legislation since World War II, and co-authored legislation which exposed $60 billion of waste, fraud and abuse in Iraq and Afghanistan wartime-support contracts. A long-time advocate of fixing America’s broken criminal justice system, Webb was spotlighted in The Atlantic Magazine as one of the world’s “Brave Thinkers” for tackling prison reform and possessing “two things vanishingly rare in Congress: a conscience and a spine.”

“Many people run for the Senate to be something, rather than do something – but not Webb,” Sabato said. “He’s a restless, ‘been-there, done-that, close-the-door’ kind of guy. For a one-term senator, he’s got quite a legacy. I’ve watched senators serve three, four, five terms and have less to show for it.”

Having widely traveled in Asia for decades, as chair of the Foreign Relations Committee’s Asia-Pacific Subcommittee Webb was a leading voice in calling for the U.S. to re-engage in East Asia, meeting frequently with key national leaders throughout the region. In 2009, he led a historic visit to Burma, becoming the first American leader to visit that country in 10 years, and opening a dialogue that resulted in the re-establishment of relations between our two countries.

Webb graduated from the Naval Academy in 1968, receiving a special commendation for his leadership contributions. First in his class of 243 at the Marine Corps Officer's Basic School, he served as a rifle platoon and company commander in Vietnam and was awarded the Navy Cross, the Silver Star Medal, two Bronze Star Medals and two Purple Hearts. He graduated from the Georgetown University Law Center in 1975, having received the Horan Award for excellence in legal writing.

Webb served Congress as counsel to the House Committee on Veterans Affairs from 1977 to 1981. In 1982, he led the fight to include an African-American soldier in the Vietnam Veterans Memorial on the National Mall. In 1984 he was appointed assistant secretary of defense for reserve affairs, and in 1987 became Secretary of the Navy. He was a all 1992 Fellow at Harvard University’s Institute of Politics.

In addition to his public service, Webb has enjoyed a varied career as a writer. He taught literature at the Naval Academy. Traveling widely as a journalist, he received an Emmy Award for his PBS coverage of the U.S. Marines in Beirut in 1983, and in 2004 was embedded with the U.S. military in Afghanistan. He wrote the original story and was executive producer of the film “Rules of Engagement,” which held the top slot in U.S. box offices for two weeks in April 2000.

Webb’s books include “Born Fighting,” a sweeping history of the Scots-Irish culture; “Fields of Fire,” widely recognized as the classic novel of the Vietnam War; and “I Heard my Country Calling,” a memoir of his early life which will be published by Simon and Schuster in May.

Webb has six children and lives in Northern Virginia with his wife, Hong Le Webb, who was born in Vietnam and is a graduate of Cornell Law School. He speaks Vietnamese and has done extensive pro bono work with the Vietnamese community dating from the late 1970s.

“In one lifetime, Jim Webb has embodied many of the ways in which Americans can serve as citizen leaders,” said Harry Harding, dean of U.Va.’s Frank Batten School of Leadership and Public Policy. “I look forward to welcoming him back to Grounds so that he can engage in a dialogue with our Batten School students about the challenges and opportunities of being a citizen leader.”

The Frank Batten School of Leadership and Public Policy will host a public talk by Webb on April 10 at 12:30 p.m. in Garrett Hall.

What’s Next for UVA’s Class of 2022? END_OF_DOCUMENT_TOKEN_TO_BE_REPLACED