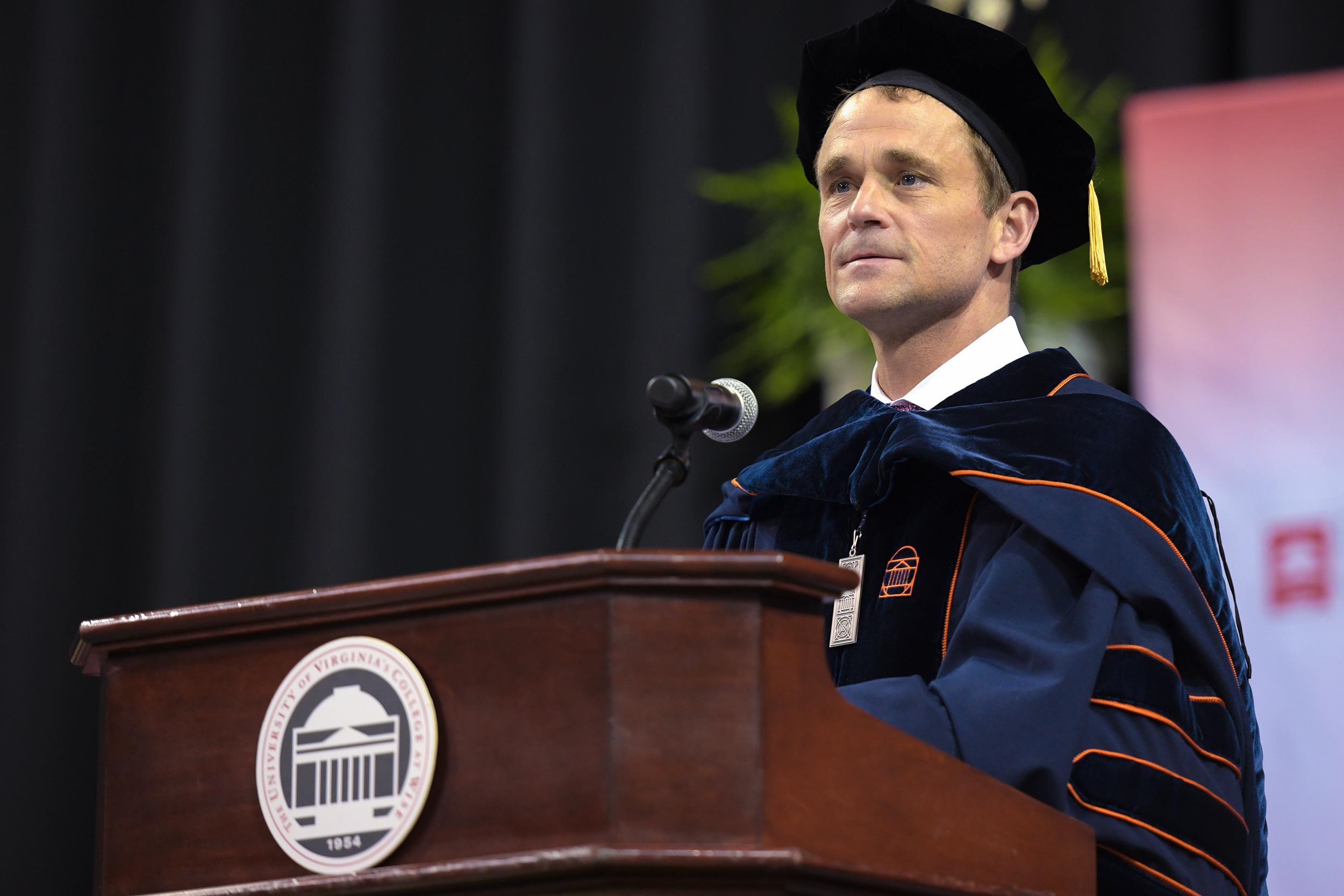 When University of Virginia basketball star De’Andre Hunter hurled the basketball toward the rafters of Minneapolis’ U.S. Bank Stadium on April 8, he marked the triumphant end of his team’s season and a national title run for the ages.

The impact of that run, however, was just beginning as fans – among them UVA President Jim Ryan – began to digest what the team had accomplished and think about all that Hunter, his teammates and their coach Tony Bennett, taught the University and the watching nation.

Last week, Ryan – a longtime UVA basketball fan who was as excited as anyone in the stands in Minneapolis – shared five of those lessons with graduating students at UVA’s College at Wise. Even those of us who are not recent graduates can learn a lot from them.

Lesson 1: If you make a mistake, own it and learn from it.

Ryan pointed out that UVA men’s basketball team owned up to mistakes and grew stronger. Coaches and players, he said, talked a lot about how 2018’s stunning upset, a first-round tournament loss to a No. 16 seed, brought the team closer and made them even more determined to succeed this year.

“Instead of running away from this mistake, Coach Tony Bennett and the team owned it, and they used it all year to motivate themselves,” Ryan said. “They didn’t shy away from it, but they learned from it.

“When you leave here, if you’re like me, you are likely to make mistakes,” he told the graduates. “You should expect to make mistakes, but you should also commit to learning from them. You will end up, like the UVA basketball team, stronger than you were before.”

Lesson 2: If you want to succeed, work hard even when no one is looking.

Everyone saw the UVA team work hard on the court. But making those tough jump shots – or draining clutch free throws, à la Kyle Guy – doesn’t just happen. It takes hours and hours of work behind the scenes.

If you watched UVA’s practices, Ryan said, “You would have noticed that the practices always looked the same, with the same intensity, whether the team was preparing to play Morgan State or Duke.” And, he said, many players stayed behind afterward just to shoot, just to get better.

He saw a similar work ethic among students, faculty and staff at UVA-Wise.

“That work ethic is contagious. It’s hard to come here and not notice it, not catch it,” Ryan said. “My simple advice to you today is to keep putting in the work, the effort, the dedication.”

He encouraged students keep that work ethic alive, and to trust in it when others underestimate them.

“In your life, there may be people who underestimate you because of where you are from and what they think they know about you. As someone who grew up in a blue-collar town and was a first-generation college student, I know this to be true,” he said. “But I also know that the harder you work, the luckier you will become.”

Lesson 3: It shouldn’t be all about you, but instead about the team.

For this lesson, Ryan singled out one player: Jack Salt. Salt, who earned a master’s degree from UVA’s Curry School of Education and Human Development on Sunday, started at center for most of his career, but played reduced minutes this year, due to injury and the growth of other players.

“According to his teammate, Ty Jerome, if you ask Jack to play 30 minutes one game and five minutes the next, he will always give it his all,” Ryan said. Off the court, Salt frequently read to students at local schools, spent time with patients at the UVA Children’s Hospital and helped his teammates, especially when his close friend Isaiah Wilkins struggled with depression.

“Ask anyone what makes this place special, and you hear one word over and over again: family. Everyone knows, and more importantly, everyone cares about everyone else,” he said, citing stories like that of student Bridgette McCarty, whose classmates and professors surprised her by showing up at her grandmother’s funeral.

“I hope that you remember that some of the greatest figures in history, and also some of the most beloved people at Wise, have been servant-leaders. They have made a difference in the world by helping others, and I hope you will as well,” Ryan said.

Lesson 4: Never give up.

The first game of this year’s NCAA Tournament felt eerily like the last game of the last one. UVA again found itself down by a double-digit margin to a No. 16 seed, this time Gardner-Webb University.

At halftime, Ryan said, Bennett told the team he could accept defeat, but couldn’t accept anything less than all they had to give: “In other words, don’t even think about giving up,” Ryan said.

UVA won by double digits, scoring twice as many points as Gardner-Webb in the second half.

“I’m sure all of you at some point have been told to settle, or maybe even to give up completely. I hope you ignore those voices,” he told the graduates. “The fact that you are graduating today means that you have already chosen more than once not to give up on yourselves, and I hope you never give up on Southwest Virginia either, because I believe no one should give up on the places and the people they love. There is so much to love about this place, beginning with the people.”

Lesson 5: When you do succeed, give back.

Just a few days before the national title game, a bus carrying the UVA-Wise softball team caught fire on its way to a game in West Virginia. Fortunately, no one was hurt. However, the bus and the team’s equipment were severely damaged.

“As soon as word got out, the rest of the community swung into action,” Ryan recalled. “Whatever people could give, they gave, offering to donate everything from new uniforms to a Chick-fil-A lunch.”

The lesson, Ryan said, was to always give back, in good times as much as in bad.

“This belief is based on two principles: first, that with success comes responsibility; and second, that all of us are only here because of the generosity of those who came before us,” he said. “While we might not be able to pay them back directly, we can do our part for someone else.”

Again, Ryan cited McCarty, whom classmates and professors supported at her grandmother’s funeral, as an example. During her time at Wise, McCarty studied abroad in South Africa and Peru and, Ryan said, came to truly appreciate what Appalachia taught her – “to persevere, to treat others with kindness, to be respectful to those who don’t have as much.”

“Now, she wants to use her experiences to help people back home,” he said. “For the rest of your life and all of your success, I hope that you remember to give back, including to this place and these people who have given you so much.”