Academical Village’s Hotel A Gets an Upgrade

James Zehmer, project manager, examines some of the original brickwork for the building. (Photo by Dan Addison)

After 190 years, Hotel A – part of the original Thomas Jefferson-designed Academical Village at the University of Virginia – is finally getting a lavatory.

On the north end of the West Range, Hotel A is undergoing renovation to turn the basement into useable space and to extend the hotel to an adjacent student room, where its first lavatory will be installed – albeit accessible only through an outside door.

“The cellar has been unused for many years, except as storage, and we want to make it more habitable,” said Facilities Management’s James Zehmer, who is leading the project.

For the first fifty years of its history, Hotel A was rented out to a hotelkeeper and served as a dining hall and work site and residence for enslaved African Americans. Later, it became a physiology lab and most recently, home of the Virginia Quarterly Review. The interior of the building has undergone extensive reconfiguration and restoration over the years.

“An understanding of the alterations throughout the history of Hotel A informs the design as to where modern systems should be installed and where more historic fabric should be left alone,” Zehmer said. 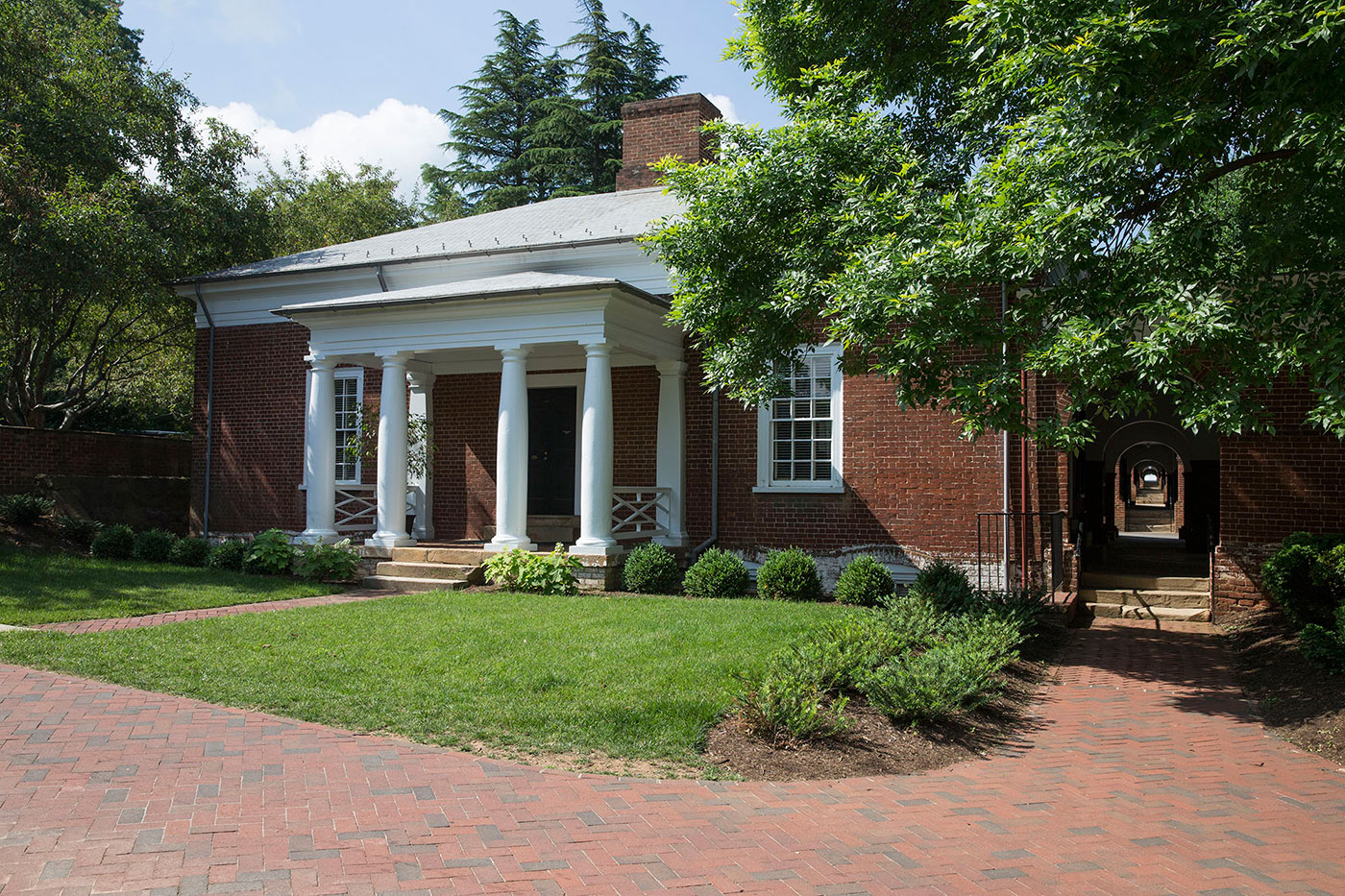 Hotel A, which started off as a dining facility for University of Virginia students, is undergoing extensive renovation to upgrade its facilities.

The renovation also will create two new offices and a shared office and meeting space in the cellar, doubling the current useable square footage of the building. A large first-floor room will serve as a flexible area designed to accommodate student study space as well as technology to allow for presentations and Web-based meetings that could include participants from around the world – a key necessity considering that the new tenant will be UVA’s Center for Global Inquiry and Innovation.

UVA’s Project Services Department is serving as the construction manager and most of the work is being done by in-house workers.

The student room adjacent to Hotel A, West Range 1, was a part of the hotelkeeper’s accommodation for many years, as far back as 1834, and may have served as additional work or living space for enslaved laborers owned or hired by the hotelkeeper. A window in the east wall of the student room will be converted to a door and an exterior metal deck will provide access from the hotel to the lavatory, which will be available to the hotel’s occupants, students of the Center for Global Inquiry and Innovation and those participating in activities at the University Chapel, answering a long-needed resource for that facility.

According to Maurie McInnis, professor of Art History and American Studies, Hotel A, like the other hotels on the ranges, played a vital role in the Academical Village. Each of the students boarded with a hotelkeeper, and the faculty laid out the duties they expected the hotelkeepers to fulfill. These included providing three meals a day, lighting the fires and bringing water to the dormitory rooms by 6 a.m., and providing laundry and cleaning services for the students. The faculty also specified that the hotelkeepers were to keep at least one enslaved person for every ten people they served. The original kitchen space in the hotel’s basement is largely intact, including the original cooking fireplace where several enslaved cooks would have worked all day to prepare meals for the dozens of students who ate here.

One of the most striking aspects of Hotel A, is the extensive open paved yard just outside the kitchen door. This was an area where enslaved cooks likely did a fair amount of food preparation, such as plucking chickens, McInnis said. This basement foundation was dug out by an enslaved man named Zachariah in 1822; his owner was paid $15 for his labor.

The original kitchen space in the hotel’s basement is largely intact, including the original cooking fireplace, but most of its early finishes are gone. The ground floor of the hotel, built at the bottom of an incline, tended to be wet; in an effort to keep the water out, the floor was built up over the years, and at one point was a concrete slab. The original floor was brick, laid in a herringbone pattern, which Zehmer said UVA’s masons will restore in the new brick floor with modern waterproofing.

Sifting through the layers of dirt under the floor yielded archaeological finds, including fragments of glass and ceramics.

“The bulk of the artifacts recovered come from the bedding deposit associated with the later slab in the northern two-thirds of the room,” said Steve Thompson of Rivanna Archaeological Services LLC, who worked closely with Project Services’ masons to  remove the multiple floor layers. “The bedding deposit consisted primarily of coal clinker – what remains after coal is burnt – so we think it came from the dump behind the old early-20th-century boiler house where New Cabell Hall now stands.”

He said glass fragments were mixed with the coal remnants.

“The area behind the old boiler house was used as a dump in the early 20th century,” Thompson said. “This material is very useful for dating the bedding and slab, as pre-Prohibition beer and whiskey bottle fragments are common.”

There were also some artifacts found in old rat burrows, including a minie ball from the Civil War era and an 1865 silver five-cent piece from Newfoundland.

“It is highly worn and very hard to read,” Thompson said of the coin. “How it got to UVA is anyone’s guess.”

Thompson said the items did not necessarily come from the building, since rats carry objects back into their burrows and nests.

“Small shiny things are common, like buttons and coins, though I suppose buttons may have originally come in attached to bits of cloth,” he said. “Rats don’t have a great range, so the objects probably come from close by, but probably not directly from the soil we were digging in.”

Edwin Conway operated Hotel A until 1842. According to Kirt von Daacke, co-chair of the President’s Commission on Slavery and the University, in 1830, Conway owned twenty-eight people who labored to prepare food, chop wood, do laundry, clean for the students, and tend to the messiness of nineteenth-century life. In total that year, the census listed 143 people owned by faculty and hotelkeepers in the Academical Village. Fourteen of Conway’s slaves were under age ten. Students commented frequently on the fact that enslaved children were often expected to wait on the students at the dining table.

Many of the hotelkeepers found other ways to supplement the wages they received.

“Like many of the other hotelkeepers, Conway had been accused of drinking and gaming with the students as early as 1826,” according to a 2009 Historic Structure Report prepared for the University by Mesick, Cohen, Wilson, Baker Architects of Albany, New York. “Apparently, he was able to conceal his actions for years; however, by 1837, as a result of two ‘protracted sprees,’ Conway was forced to join the Temperance Society, a punishment resulting in only temporary success.”

As the University’s student population grew, more space was needed to feed the students and an addition was built on the east side of the hotel – a one-story brick wing that was about the same size as the hotel. Built sometime shortly after the Civil War, between 1865 and 1877, the addition was connected to the hotel by an enclosed passageway. It remained until the early 1930s, when it was demolished.

Garrett Hall opened in 1908 as the refectory – a student dining hall – and Hotel A was converted into laboratory space. The hotel was divided into three parts: one for the physiological laboratory, one for experimental physiology, and, in the basement, space for “experimental practice of medicine on animals,” according to Philip Alexander Bruce’s book, “History of the University of Virginia, 1819-1919.”  It was probably during this time that the first floor of the original hotel was opened into a single large room.

The building, along with its adjacent student rooms, was severely damaged in a Christmas Eve fire in 1920, a blaze that apparently started in the laboratory’s furnace room. University President Edwin Alderman and several faculty members saved records from the adjoining laboratory until the fire was brought under control. Even today, there are still some charred timbers in the hotel’s attic.

The laboratories remained for several years until it became the home of the Virginia Quarterly Review from 1928 to 2012, when it moved to Boar’s Head Lane. In 1965, Frederick Doveton Nichols, architectural history professor and author of “Thomas Jefferson, Landscape Architect,” supervised the restoration of the first-floor rooms to the original design. The roof was replaced in the 1980s, replicating a metal shingle design Jefferson had pioneered.

The current work should be completed on the hotel by this fall.

At UVA, There Is a Club for Everyone END_OF_DOCUMENT_TOKEN_TO_BE_REPLACED