Accolades: Ranking Touts UVA as ‘Best Value’ in Virginia and One of the Best in America 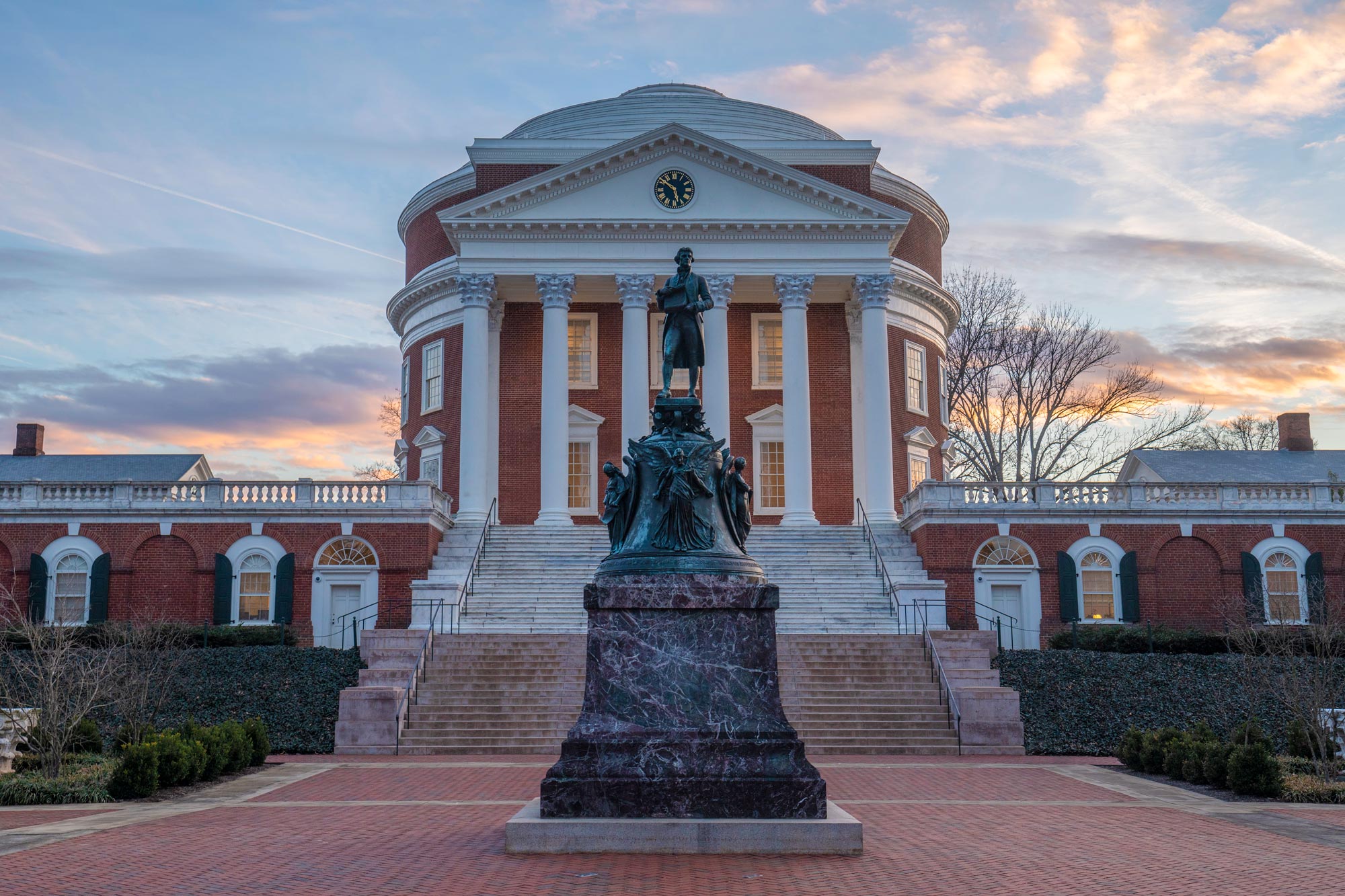 The University of Virginia is the top-ranked school in Virginia and No. 17 nationally in “best value” rankings released recently by the New York-based financial technology company SmartAsset.

The Society for College and University Planning honored UVA’s plans for the Ivy Corridor in its 2020 SCUP Excellence in Landscape Architecture award program.

The design, created by the team of DumontJanks, VHB Biohabitats and OvS, received honors in the Open Space Planning category.

The Ivy Corridor encompasses a 14.5-acre tract that runs along Ivy Road from Emmet Street to Copeley Road. The University has long worked on a plan to redevelop the area, including the construction of a new hotel and conference center and a home for the School of Data Science. 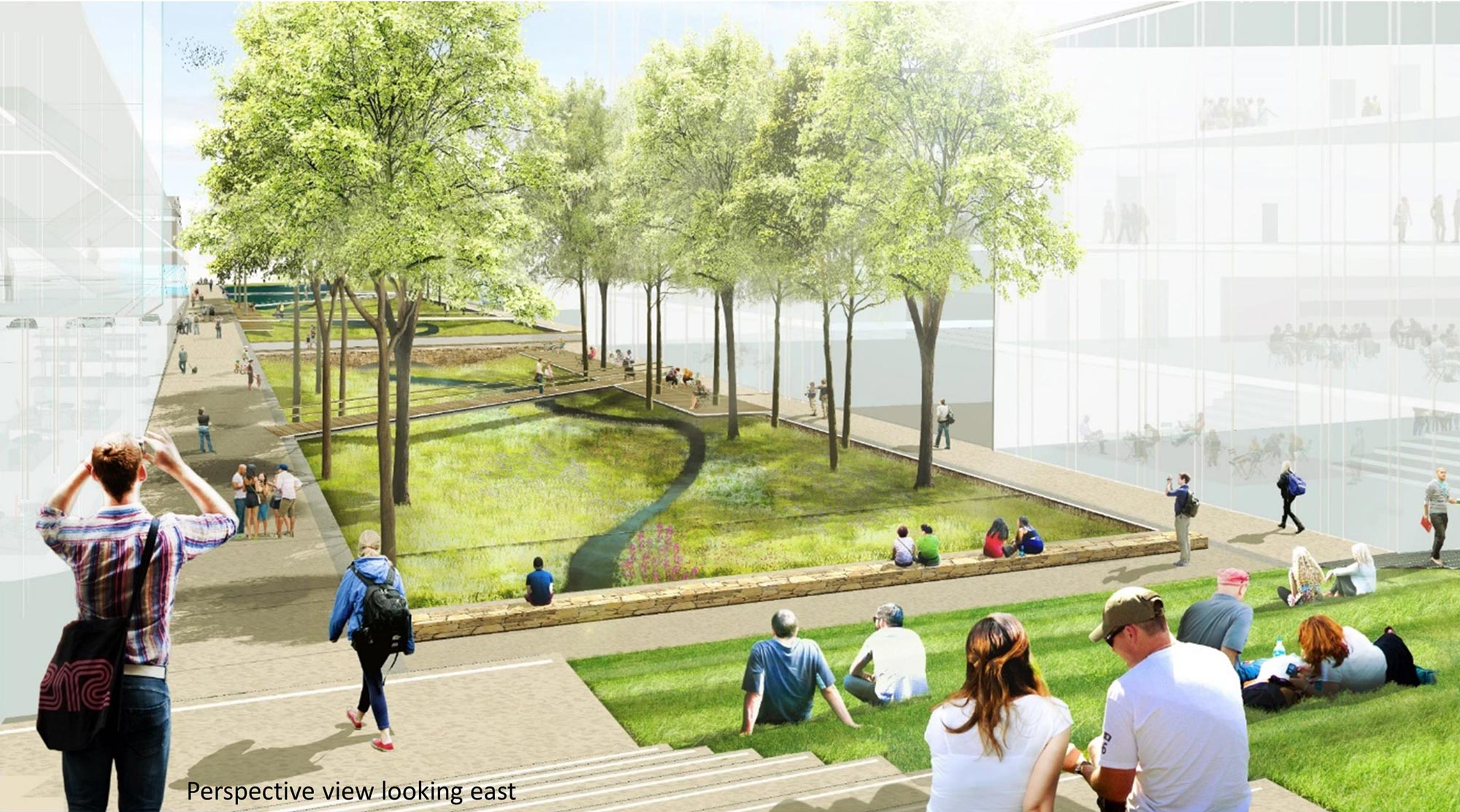 In conjunction with the Ivy Corridor plan, the University is working in coordination with the City of Charlottesville on the development of an “Emmet Streetscape” plan, which will provide improvements along Emmet Street from its intersection with Ivy Road north to Arlington Boulevard.

The planned improvements along both Emmet Street and Ivy Road are designed to make the area more pedestrian- and bicycle-friendly, with green space for the benefit of the University and Charlottesville communities, and to improve the connections between Central and North Grounds.

Historian Elizabeth R. Varon, author of “Armies of Deliverance: A New History of the Civil War” (Oxford University Press), is the recipient of the 2020 Gilder Lehrman Lincoln Prize, awarded by Gettysburg College and the Gilder Lehrman Institute of American History. A specialist in the Civil War era and the 19th-century South, Varon is on the executive council of UVA’s John L. Nau III Center for Civil War History and is the Langbourne M. Williams Professor of American History.

She was to have been recognized in April during an event hosted by Gettysburg College and the Gilder Lehrman Institute of American History in New York City, but the event was postponed to Feb. 4 due to the COVID-19 pandemic. The award includes a $50,000 prize and a bronze replica of Augustus Saint-Gaudens’ life-sized bust, “Lincoln the Man.”

Varon’s 500-page “Armies of Deliverance” anchors the Civil War narrative in the defining moments that occurred on the battlefield, while simultaneously integrating the social and military history of the time period. 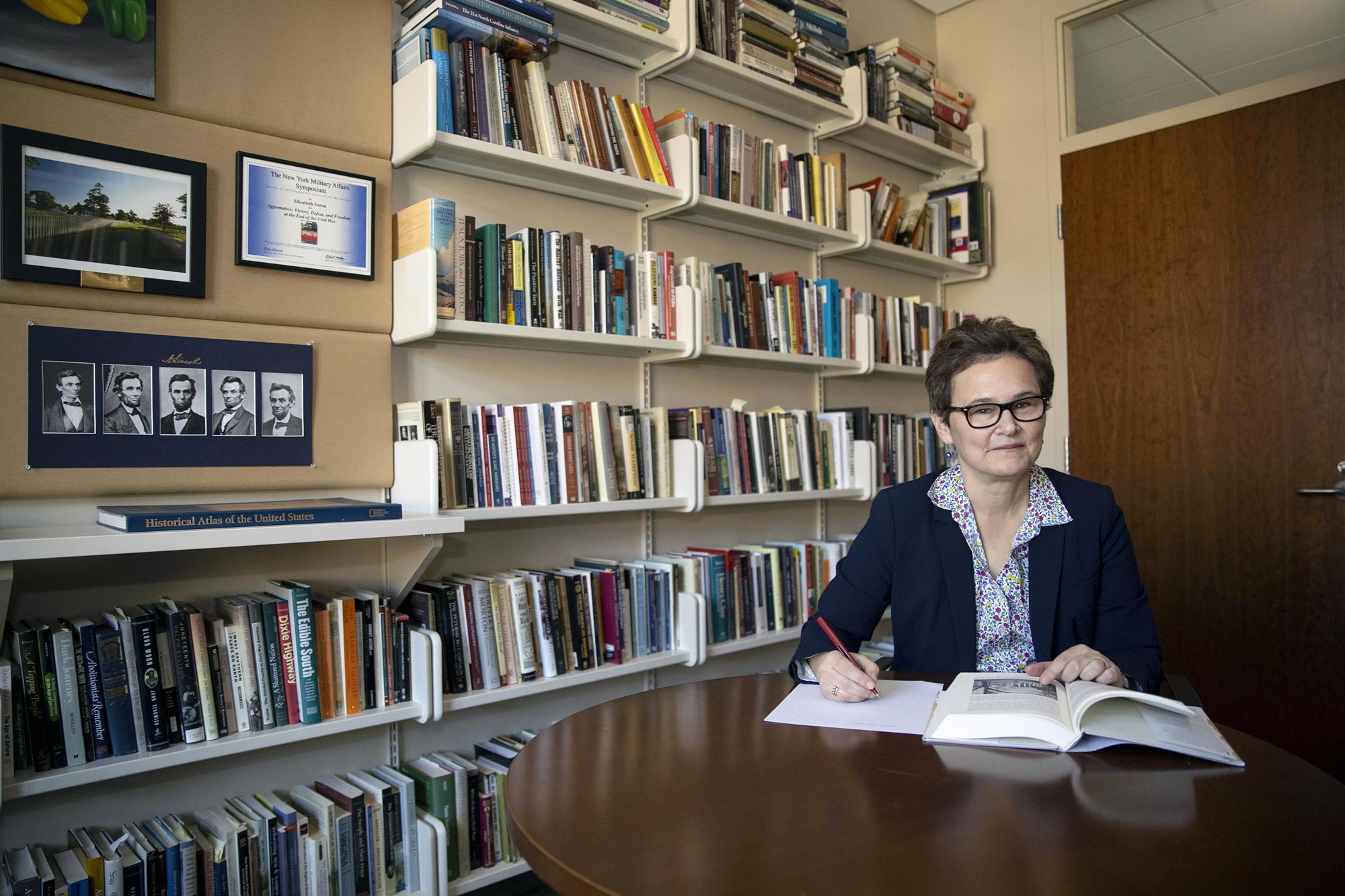 “‘Armies of Deliverance’ is the defining history of the Civil War for the next generation, written by one of the leading Civil War authors of our time,” said James G. Basker, president of the Gilder Lehrman Institute of American History, in a release announcing the honor.

“Dr. Varon’s scholarly exploration of the Civil War era not only offers insights into this defining chapter in our nation’s history, but it also signals the fragility of our own democracy and the responsibilities inherent in ensuring its vitality today,” Gettysburg College President Robert W. Iuliano said. “Through her ambitious and important work, Dr. Varon provides readers with a unique vantage point in which to more fully understand the driving motives behind Union and Confederate forces, and how these motives – shaped by the experiences, beliefs, and aspirations of everyday people, navigating this singular moment in time – manifested themselves on the battlefield and at home. It is an inspired work worthy of our highest recognition.”

Dr. Eric. R. Houpt, head of UVA’s Division of Infectious Diseases and International Health, was elected as one of 73 new fellows of the American Academy of Microbiology, the American Society for Microbiology announced in February.

Fellows of the academy, an honorific leadership group within the American Society for Microbiology, are elected annually through a highly selective, peer-review process, based on their records of scientific achievement and original contributions that have advanced microbiology.

There are more than 2,500 fellows in the Academy, representing all subspecialties of the microbial sciences and involved in basic and applied research, teaching, public health, industry and government service. In addition, fellows hail from all around the globe. The Class of 2020 represents fellows from 11 different countries, including Australia, Austria, Brazil, Chile, China, France, Germany, Israel, Switzerland, the United Kingdom and the United States. 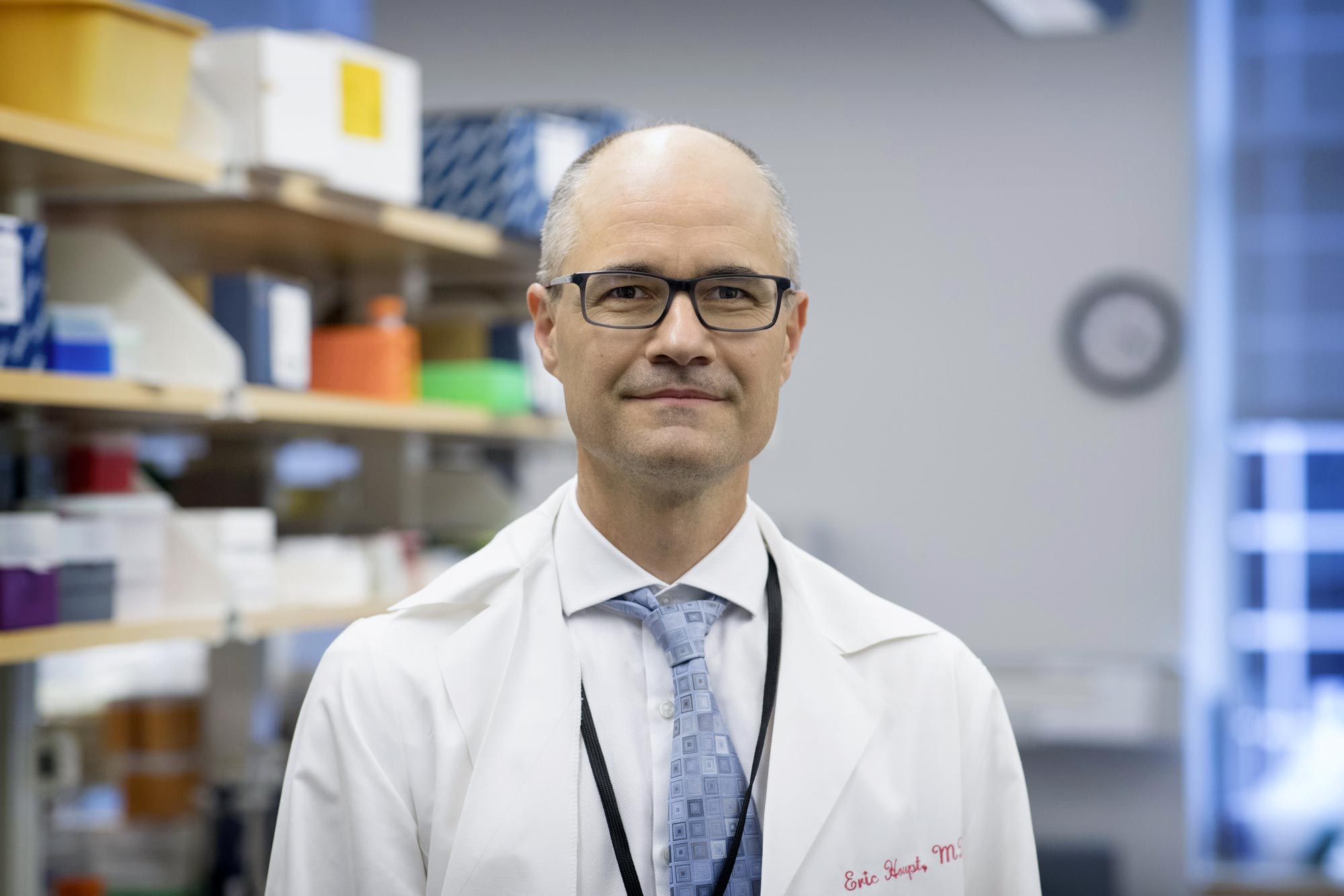 “This is the highest recognition in microbiology, and in Eric’s case is a reflection in part of his redefinition, with molecular tools, of the causes of diarrheal illness in infants and children in low-income settings,” said Dr. William Petri, Wade Hampton Frost Professor of Medicine and vice chair for research of the Department of Medicine. “This work was published in the Lancet in 2016 with Eric as the senior author, and it has already been cited more than 300 times. Eric’s pioneering work has shifted research priorities at the Gates Foundation and [the National Institutes of Health] to a focus on shigella, cryptosporidium and campylobacter as the leading causes of diarrhea.”

Houpt, the Jack M. Gwaltney Jr. Professor of Infectious Diseases, and his research team are internationally renowned for the development of molecular diagnostics and application to enteric infections in children in resource-limited settings. The work has fundamentally changed how infectious diarrhea is recognized, showing that diarrhea is often a multi-pathogen event and a state of enteropathogen excess above a high carriage baseline.

A recent manuscript in The Lancet showed how molecular diagnostics could assign an infectious cause to diarrhea in more than 80% of cases, with most of the global childhood diarrhea burden ascribable to just six pathogens. This work has galvanized global efforts to develop shigella vaccines and prompted clinical trials by the World Health Organization to evaluate new management strategies for diarrhea. For this work he was awarded the 2015 Oswald Avery Award for Achievement by the Infectious Diseases Society of America.

Houpt’s special clinical interests include tropical medicine and tuberculosis and non-tuberculous mycobacterial diseases. He is the tuberculosis consultant physician for the Virginia Department of Health and has NIH grants in TB diagnosis and management.

Engineer Tapped for National Academies of Sciences, Engineering and Medicine Board

Venkataraman “Venkat” Lakshmi, a professor in the Department of Engineering Systems and Environment, is newly appointed to the Water Science and Technology Board of the National Academies of Sciences, Engineering and Medicine.

The board’s objective is to “improve the scientific and technological basis for resolving important questions and issues associated with the efficient management and use of water resources,” according to its website. Membership on the board is highly selective, with appointees chosen for their professional qualifications to serve as volunteers and individuals, not as representatives of an institution. 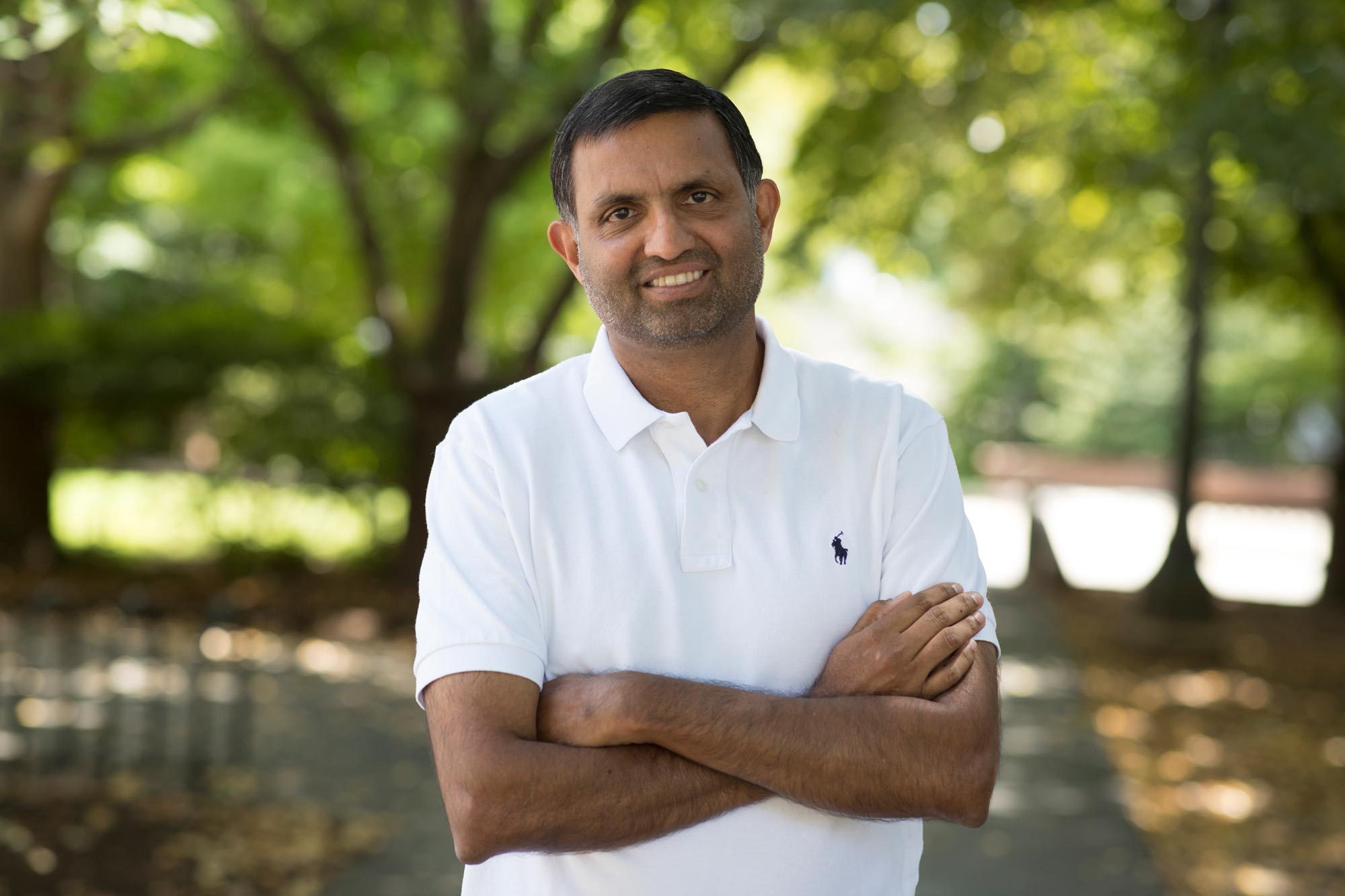 Lakshmi joined the UVA Engineering faculty in 2019 after directing the National Science Foundation Hydrologic Sciences Program from July 2017 to December 2018.

His areas of research interest include catchment hydrology, satellite data validation and assimilation, field experiments, land-atmosphere interactions, the vadose zone – the area that extends from Earth’s ground surface to the water table – and water resources. He specializes in using data collected from space, aircraft and in situ systems, along with hydrological and ecological models, to make observations about the terrestrial water cycle and to better understand weather, climate and ecology.

“The National Academies of Sciences, Engineering and Medicine play critical advisory roles in all matters of science and technology for the country,” Brian L. Smith, professor and chair of the Department of Engineering Systems and Environment, said. “Those who are asked to serve on academy boards are highly regarded as among the best in their fields. Venkat fits that description, and we are lucky to have him on our faculty.”

University of Georgia Honors its Alumna, UVA’s Director of Athletics

One of the highest individual honors given to a former Georgia student-athlete, the Hartman Award recognizes “those who have demonstrated excellence in their profession and/or in service to others by 20 or more years of superior performance after graduation,” according to a press release. 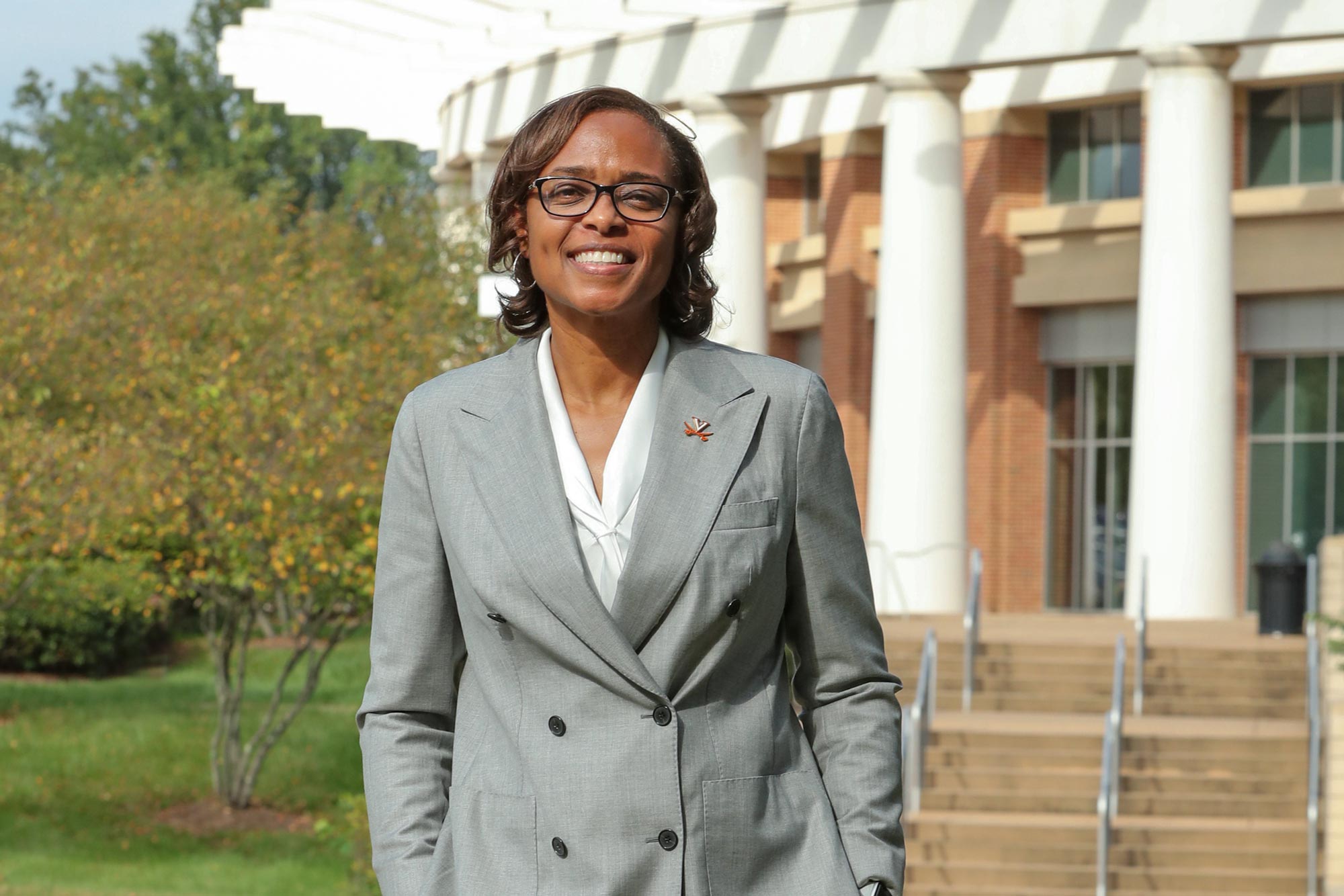 After serving for 13 years as an athletics administrator at Georgia, rising to deputy director of athletics, Williams was named UVA’s director of athletics in October 2017. Under her watch, the Cavalier men’s basketball and men’s lacrosse teams won NCAA championships in 2019, while the UVA football team has seen a resurgence.

In 2018, she launched the $180 Master Plan campaign to upgrade facilities for the Cavalier football program and UVA’s Olympic sports. Administrative buildings, sport performance centers and new playing surfaces are the most visible phases of the project, while the services and support areas encompassed within the project will have lasting impacts on student-athletes in the form of leadership, ethics, stewardship, wellness and academic achievement.

The Black Law Students Association at School of Law has won national chapter of the year honors for the sixth time since 2002.

The organization, founded in 1970, picked up the top award for large-sized chapters on March 8 at the National Black Law Students Association convention in Cincinnati. There are more than 200 BLSA chapters in the United States.

Additionally, former chapter president Rachel Barnes, who is pursuing law and MBA degrees, was elected to a full term as NBLSA national chair after assuming the position in the fall. She was elected vice chair last year.

In February, the UVA BLSA chapter was named mid-Atlantic chapter of the year. 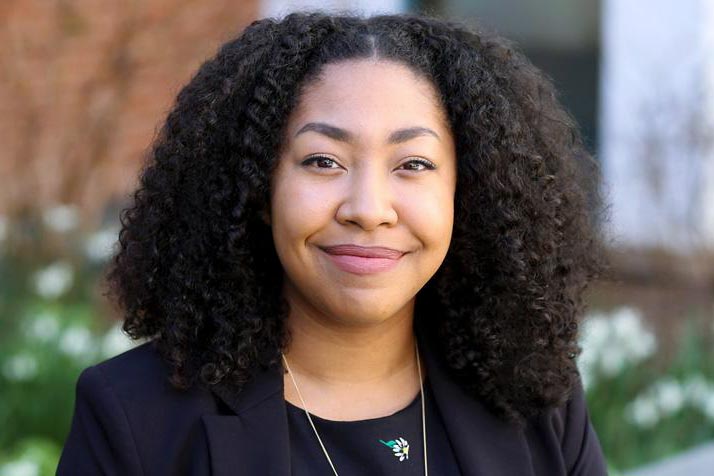 “Just 50 years ago, UVA had its first black woman graduate, Ms. Elaine Jones,” said current chapter president Lillian Childress, a second-year law student. “It is a remarkable feeling and an honor to have our national chapter of the year win coincide with such an important milestone in our school’s history.”

The national chapter of the year is chosen, in part, by the type and creativity of the programming the chapter organizes during the year. Childress said one thing that sets UVA BLSA apart is consistent presence in national leadership positions.

Anne Garland Mahler, an associate professor of Spanish in the Department of Spanish, Italian, and Portuguese, is among the national cohort of 2020 American Council of Learned Societies Fellows. The program awards fellowships to individual scholars working in the humanities and related social sciences with the potential to make significant contributions to knowledge in their fields.

This year, ACLS Fellowships totaling $4.3 million will be distributed among 81 awardees selected from nearly 1,200 applicants through a multi-stage peer review process. The awards range from $40,000 to $75,000 and support six to 12 months of full-time research and writing.

Mahler’s project, “South-South Solidarities: Racial Capitalism and Political Community from the Americas to the Globe,” unearths networks of politically radical activists and artists in the American hemisphere and around the world in the 1920s and ’30s, examining the impact of their vision for a “rebellious humanity” in social movements today, specifically on the subjects of black and indigenous labor, immigrant rights and racial policing.

A Year We Will Never Forget: 2019-20 in Review END_OF_DOCUMENT_TOKEN_TO_BE_REPLACED

‘What Will You Carry With You?’ Remarks From UVA President Jim Ryan END_OF_DOCUMENT_TOKEN_TO_BE_REPLACED