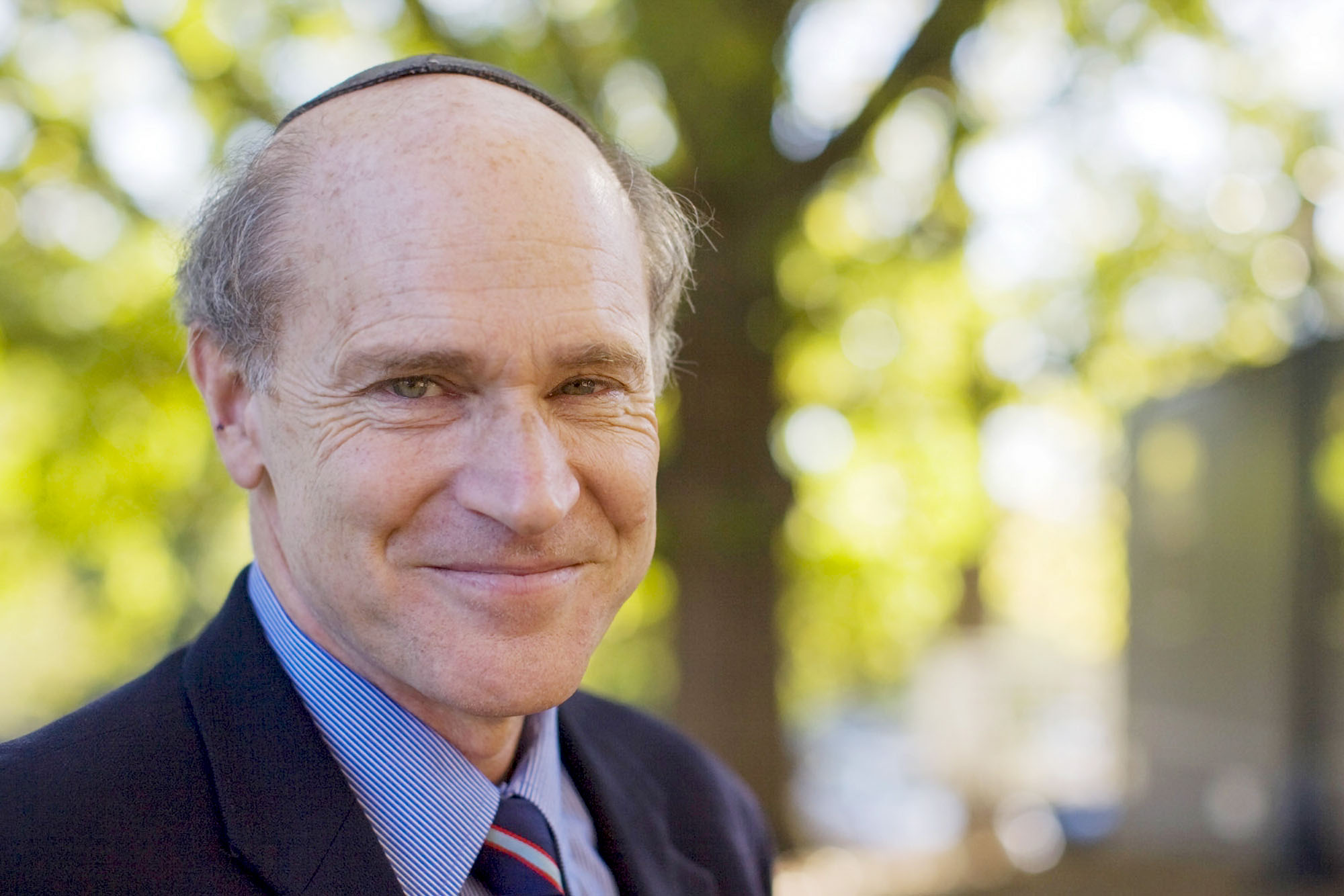 The festschrift is unique to academia, honoring a retiring faculty member with a compilation of essays written by authors in honor of the retiree.

In the case of Peter Ochs, the University of Virginia’s Edgar Bronfman Professor of Modern Judaic Studies, his friends and colleagues took the tradition a step further: 16 of the pieces in his festschrift, “Signs of Salvation” – presented in June – are carefully considered analyses of Ochs’ own research or teaching, integrated with comments about his how work influenced the lives of the authors, who included six of his former Ph.D. students, plus many colleagues around the world. The co-editors were former UVA Ph.D. students Mark James and Randi Rashkover.

Ochs, who plans to step down in December, said he was “especially moved and instructed” by the collection.

“Reading through all this, I have had this calming experience that the essayists have uncovered and brilliantly identified everything I’ve thought and all of my pertinent reasonings and purposes, but also much more beyond what I’ve seen,” Ochs wrote in an email.

“I am always rather driven to pursue certain lines of inquiry I feel are urgently needed to address this or that ill in the world or in academe – and equally driven to co-nurture a community of scholars dedicated to the same general purpose. After reading the festschrift, I realize that I don’t anymore have to push so hard, since all of the younger essayists have the spirit and insight to do anything I wanted to do, but do it better and with new discoveries and fresh energies.”

Not that Ochs is resting on his laurels. Over the winter, he published his latest book, “Religion Without Violence: The Practice and Philosophy of Scriptural Reasoning,” describing his work to create interreligious understanding through close, mutual readings of sacred texts from Judaism, Christianity and Islam. The practice has since spawned an international Scriptural Reasoning movement.

According to the publisher, in “Religion Without Violence,” Ochs “reflects on the practical and philosophic lessons he has learned from hosting hundreds of Scriptural Reasoning engagements. He introduces the ‘scriptural pragmatism’ of Scriptural Reasoning. He painstakingly recounts instances of successful scriptural reasoning and warns where and how it might fail. He provides guidance on how to introduce and facilitate Scriptural Reasoning in the classroom. He shows how reading out of the ‘hearth’ of a faith can contribute to peace-building across religions. And, drawing on the resources of rabbinic tradition, Augustine and Charles Peirce, he moves beyond practice to reflect on the implications of Scriptural Reasoning for discerning what kinds of ‘reasoning’ best address and help repair societal crises like religion-related violent conflict.”

Ochs said he plans to continue writing after his retirement. 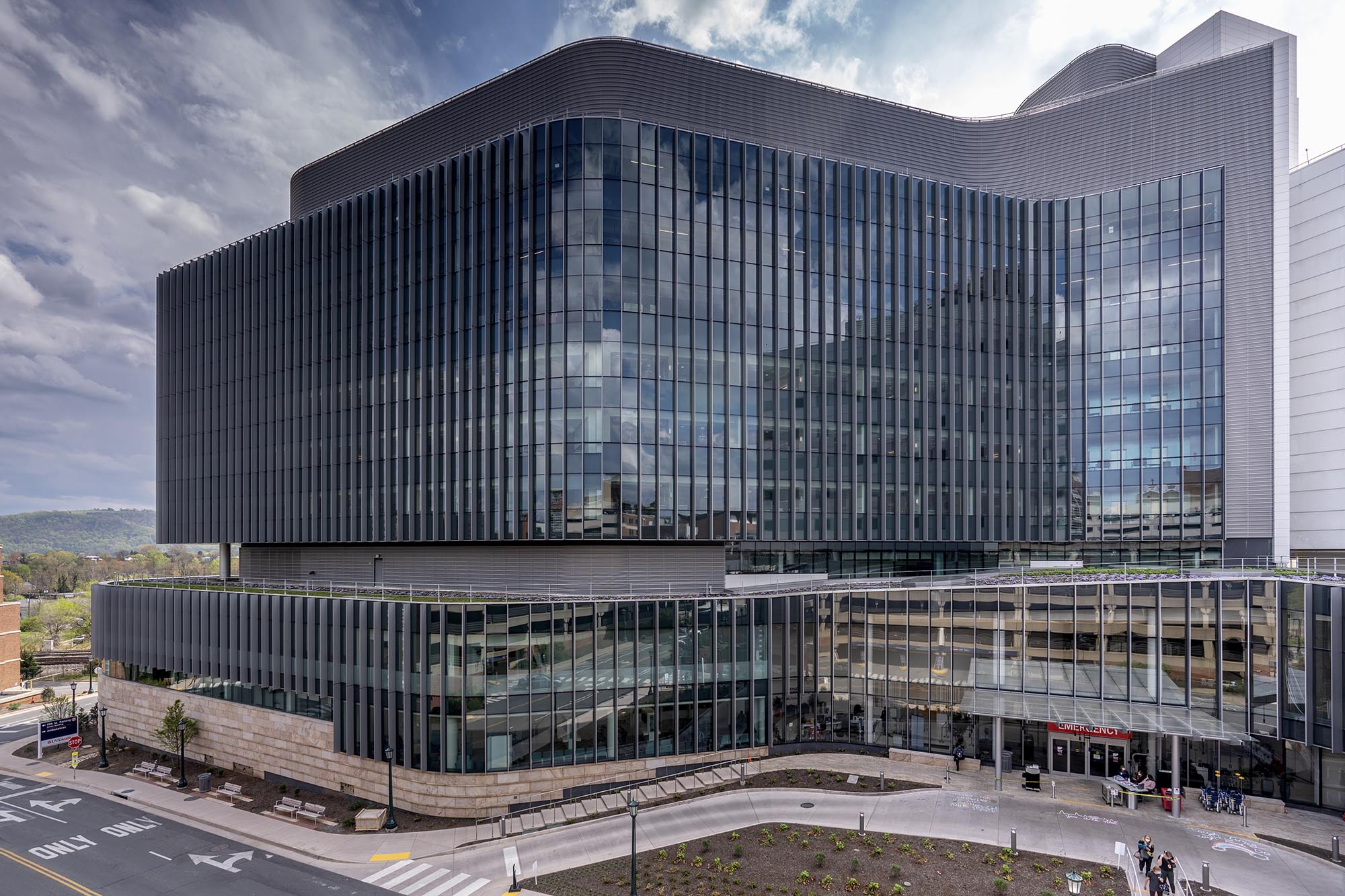 The new emergency department and inpatient bed tower offer an enhanced and more dignified experience for patients and staff. Designed by Perkins&Will and built by Skanska, the interior connects patients and staff to the calming effects of nature, reduces the building’s environmental impact, allows for greater flexibility in the ways patients and staff use space and accommodates evolving medical technology and best practices.

A 28-foot-tall atrium with towering windows floods the space with natural light. Circular skylights spanning 12 feet in diameter, together with a constellation of recessed ceiling lights, lend a celestial feel to the space – as though one is looking up at a starry sky. A light-colored wood ceiling, juxtaposed with white floors and ceilings, creates a feeling of brightness and warmth. The 400,000-square-foot bed tower includes 168 private patient rooms – each of which was designed to offer a range of care options tailored to an individual patient’s needs.

Elizabeth Varon, Langbourne M. Williams Professor of American History and associate director of UVA’s John L. Nau III Center for Civil War History, is among 18 new fellows elected to the Society of American Historians, “based on their demonstrated commitment to literary distinction in the writing and presentation of history and biography. Literary excellence in historical work is marked by vividness, clarity, empathy, narrative power, and explanatory force.”

Varon most recently published “Armies of Deliverance: A New History of the Civil War,” named one of the 10 best nonfiction books of 2019 by The Wall Street Journal. In the book, she posits that Union troops in the American Civil War were motivated by the idea of deliverance, in which they were not only seeking to preserve the nation, but also trying to save the misled Southern masses caught in the grip of the “slave power conspiracy.” 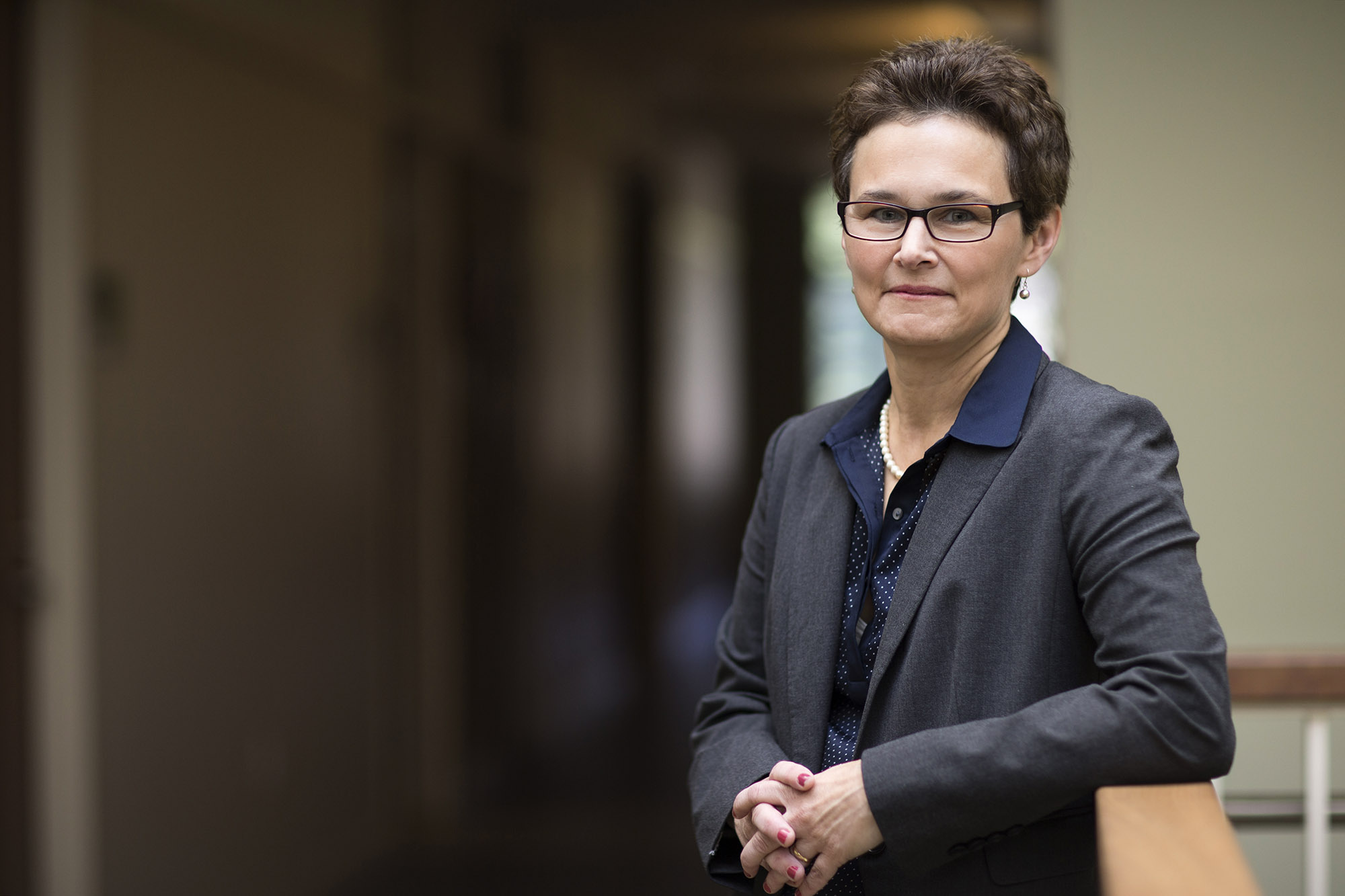 Blending military history with social history, Varon used accounts of major battles and campaigns to open discussions of topics such as the role of women in Civil War medicine and how the resistance of enslaved people shaped Union emancipation policy.

Among her earlier books are “Appomattox: Victory, Defeat and Freedom at the End of the Civil War,” which won the 2014 Library of Virginia Literary Award for Nonfiction and the 2014 Daniel M. and Marilyn W. Laney Prize of the Austin Civil War Roundtable; “Disunion!: The Coming of the American Civil War, 1789-1859”; and “Southern Lady, Yankee Spy: The True Story of  Elizabeth Van Lew, A Union Agent in the Heart of the Confederacy,” which received the Lillian Smith Award from the Southern Regional Council and the 2004 Richard Slatten Prize for Excellence in Virginia Biography from the Virginia Historical Society, and was named one of the five best books on the “Civil War away from the battlefield” in the Wall Street Journal in October 2008.

Associate professor Ishan Williams, assistant dean of the School of Nursing’s Inclusion, Diversity & Excellence Achievement initiative and head of the school’s Aging Research Team, was one of four individuals chosen by the Southern Gerontological Society to receive the Victor W. Marshall Fellowship at the group’s annual meeting in April.

The award recognizes “outstanding and continuing achievement that bridges the domains of original and applied research, service to government, practice with older adults, gerontology education, and advocacy within gerontology.” Williams is in her second term as Southern Gerontological Society president, having served since 2019 through the end of her term in late 2021. 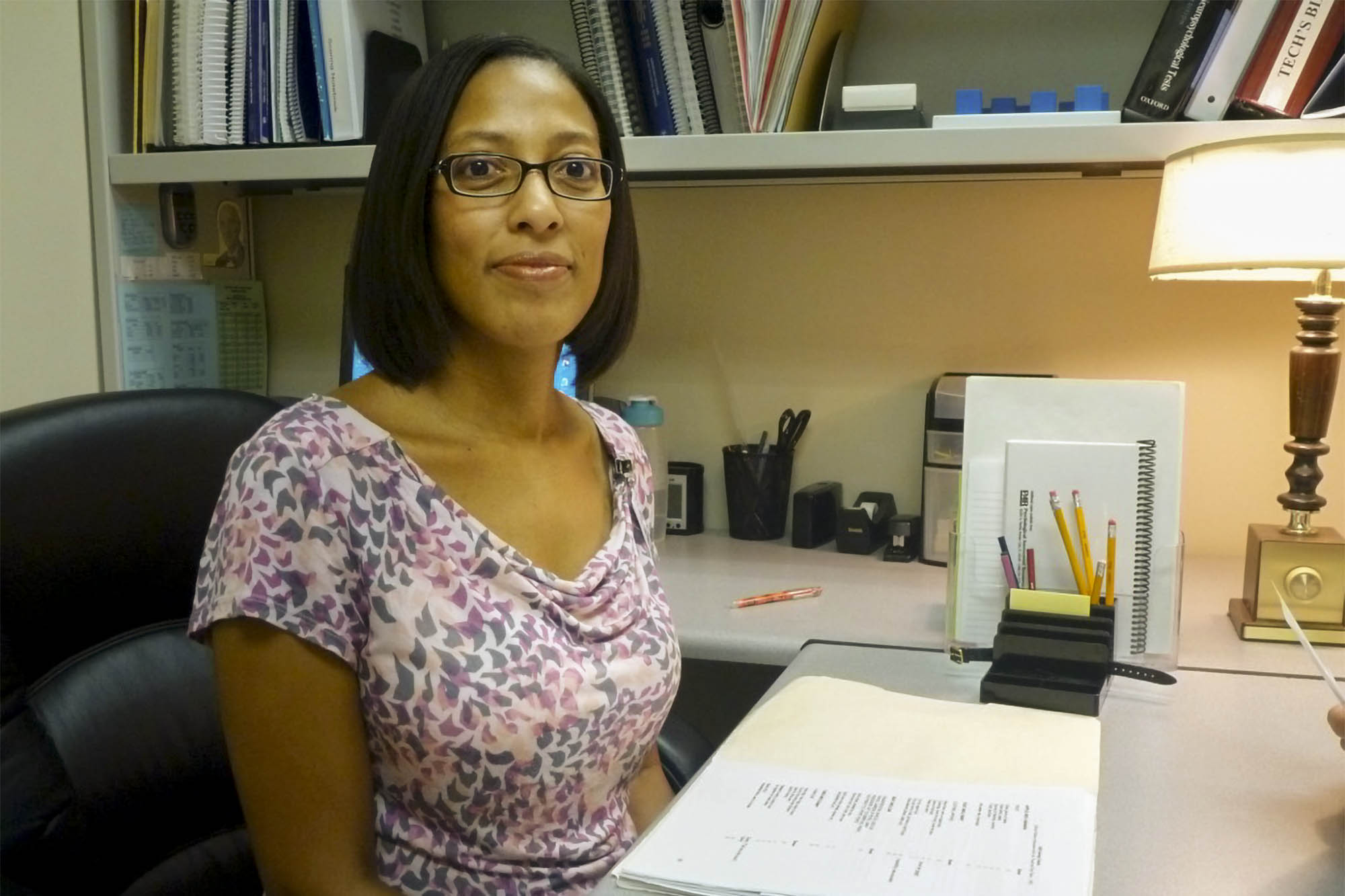 Designation by the Southern Gerontological Society as a Victor W. Marshall Fellow is equivalent to the attainment of fellow status in many prestigious societies and organizations.

Williams – who teaches health policy, evidence-based practice, health promotion and population health, and culture and diversity courses – studies quality of life and health care among older adults and their family caregivers, with a particular focus on vulnerable populations. Her current research focuses on quality of life issues among older adults with dementia, chronic disease management for older adults with Type 2 diabetes, and a study on the link between cognition and vascular problems among African American adults.

She also collaborates with colleagues on work focused on advance directives, end-of-life concerns, patients’ transitions between home, community and hospital settings, and how individuals with chronic conditions share information about their health issues on social media.

The associate director for clinical affairs at UVA Cancer Center, Williams was recognized for his contributions to scientific discoveries in the diagnosis and treatment of mantle cell lymphoma and his leadership as the inaugural chair of the foundation’s Mantle Cell Lymphoma Consortium. The consortium is composed of 150 international laboratory and clinical scientists focused on mantle cell lymphoma.

“Dr. Williams has led the way in advancing our understanding of mantle cell lymphoma,” said Meghan Gutierrez, chief executive officer at the Lymphoma Research Foundation. “His contributions to the LRF Mantle Cell Lymphoma Consortium have informed LRF’s education programming and resources for patients and led to the growth of the foundation’s [mantle cell lymphoma] research program – making LRF one of the largest private funders of research for this type of lymphoma.”

One of his proudest moments as a researcher, Williams said, was helping discover a better way to diagnose mantle cell lymphoma.

“Our discovery of the key molecular alteration in mantle cell lymphoma provided the means to specifically diagnose this malignancy and to test new treatments, which in turn led to a remarkable increase in therapeutic options and improved patient survival over the past 20 years,” he said. 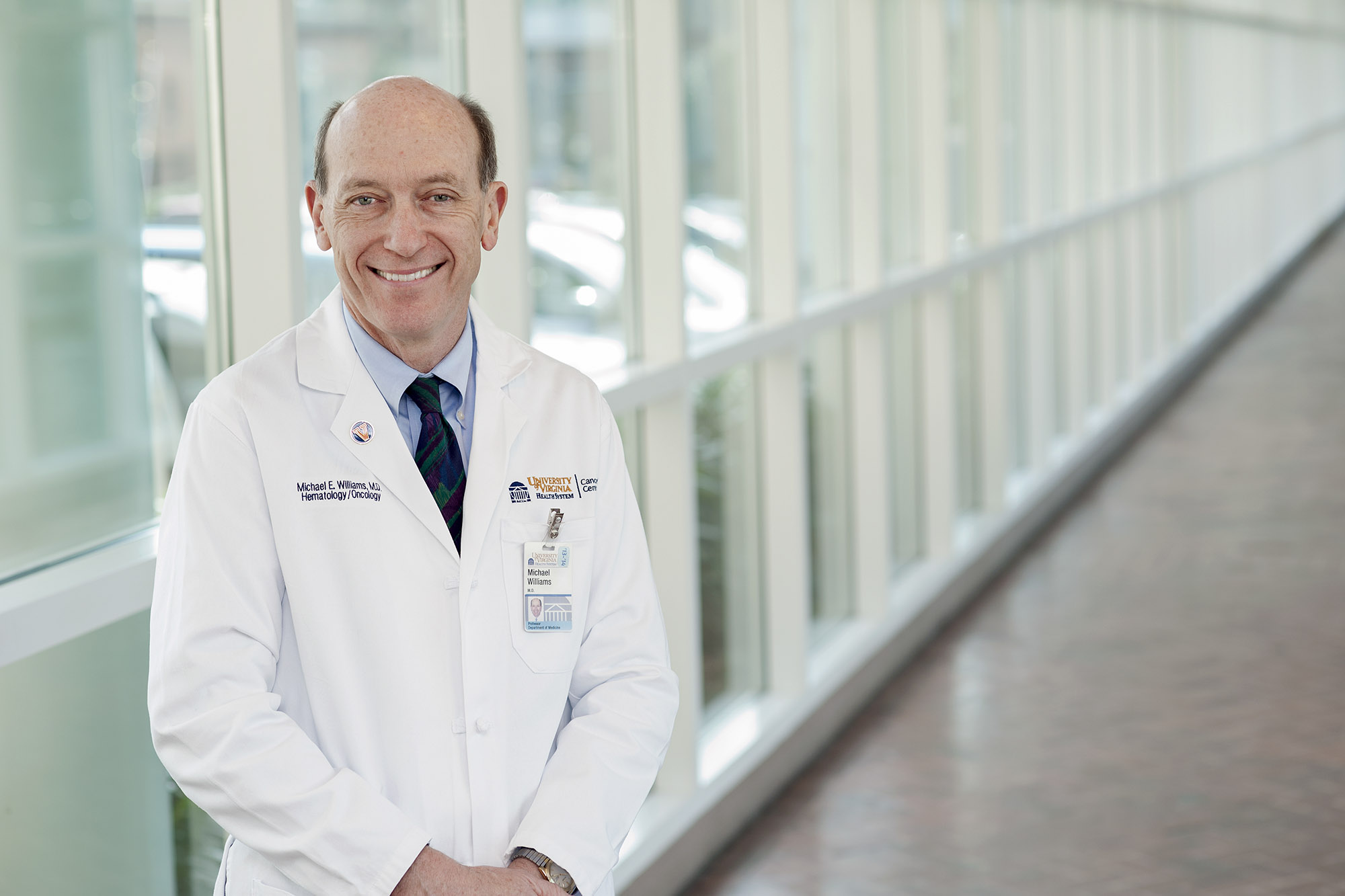 “Many advances in the field of mantle cell lymphoma research have arisen from the Lymphoma Research Foundation’s presence in this area, and by their ability to catalyze work with the greatest potential to create an impact on this disease,” Williams said. “I am honored to work with and be recognized by LRF, and look forward to our continued collaboration to drive scientific discovery and improve patients’ lives.”

Professors’ Scholarship Among Best Corporate Law Articles of the Year

Papers by School of Law professors Michal Barzuza, Quinn Curtis and Cathy Hwang have been named among the top 10 corporate and securities articles of 2020 in an annual poll.

The poll of academics, conducted for Corporate Practice Commentator, selected the UVA Law professors’ works over papers from more than 320 candidates. “Shareholder Value(s): Index Fund Activism and the New Millennial Corporate Governance,” co-written by Barzuza, Curtis and professor David Webber of the Boston University School of Law, was recently published in the Southern California Law Review. “Shadow Governance,” co-written by Hwang and professor Yaron Nili of the University of Wisconsin Law School, was published in the California Law Review. 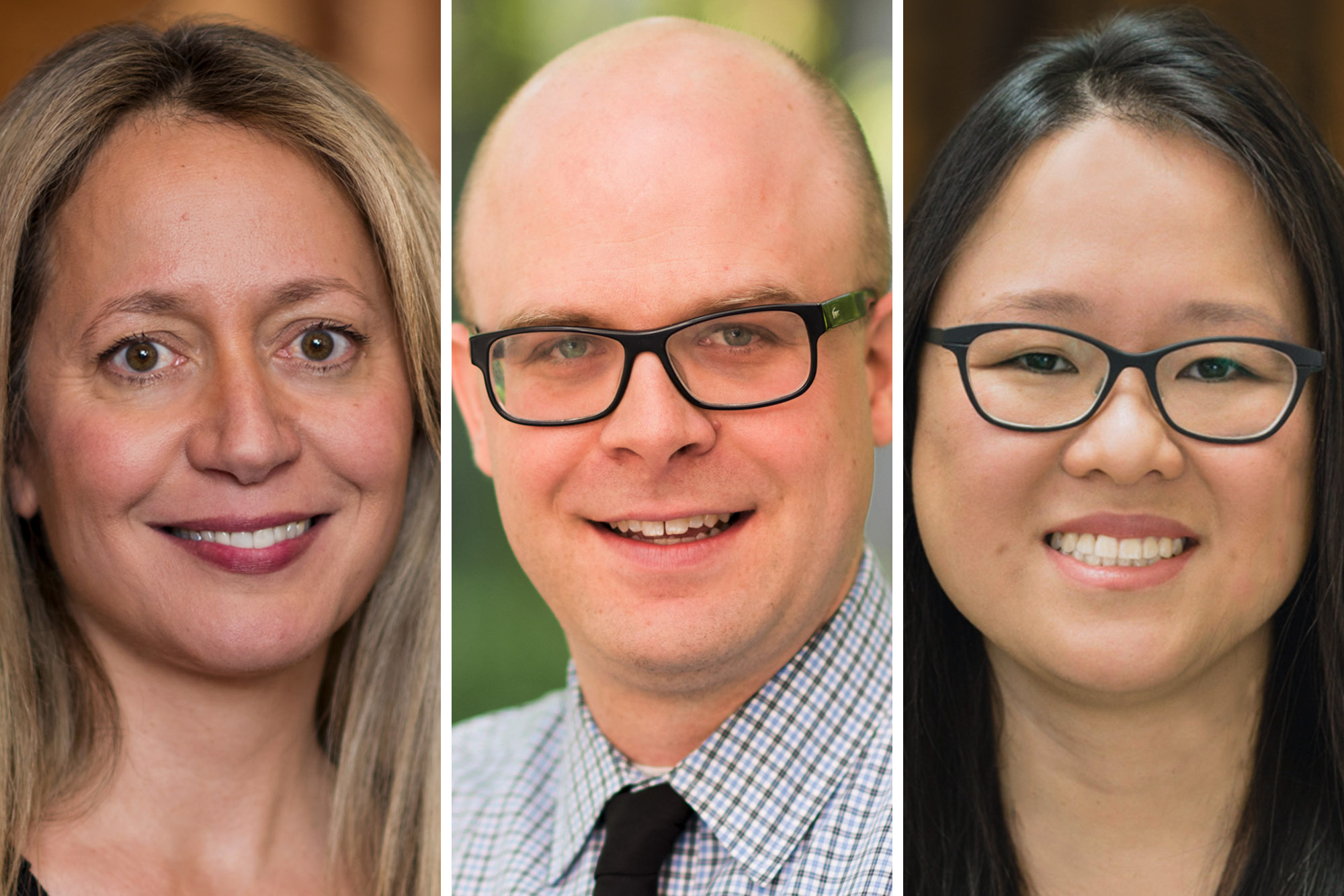 “Millennials – raised in the shadow of the threat of climate change – came of age during the 2008 global financial crisis and are now raising their young children amid a pandemic punctuated by social upheaval,” the three wrote in an op-ed for The Hill. “Substantial research shows that, more than the Gen Xers or Baby Boomers, they integrate their social values into their economic life as employees, customers, and now investors.”

These “shadow governance” documents “express a corporation’s commitment to and process on issues as wide-ranging as campaign finance, environmental sustainability, and sexual harassment, but are largely overlooked by scholars and practitioners alike,” the pair write in their abstract. “Among other things, these documents set the board’s annual agenda, define the metes and bounds of boards’ and committees’ responsibilities, and memorialize the corporation’s values.”

Fall Is in the Air on Grounds END_OF_DOCUMENT_TOKEN_TO_BE_REPLACED