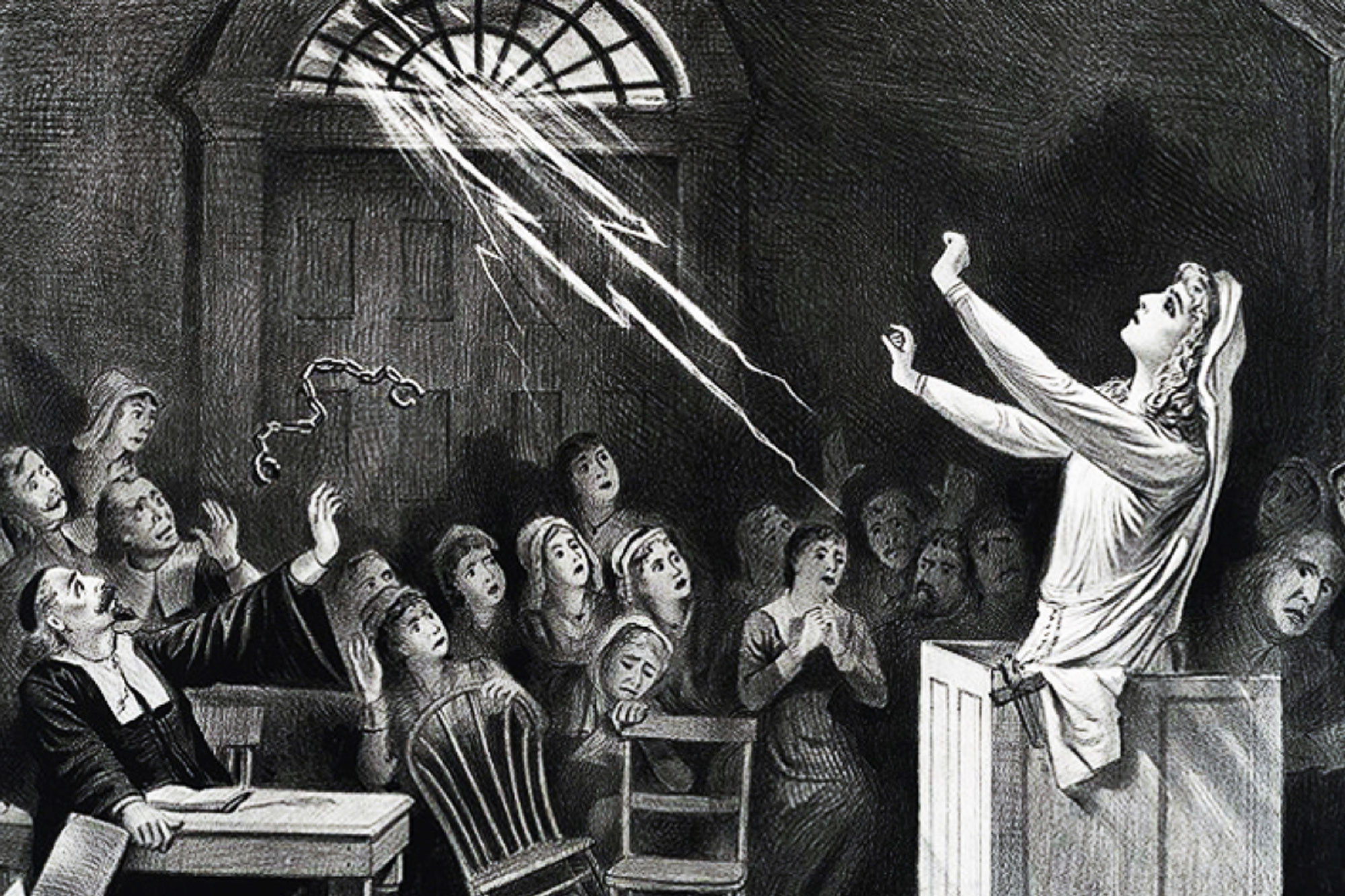 The identification by a research team that included University of Virginia religious studies professor Benjamin Ray of the execution site of 19 suspected witches more than three centuries ago has been named one of the top 10 archaeological discoveries of 2016 by Archaeology magazine.

Ray worked with Chris Gist, a geographical information systems specialist in UVA’s Alderman Library Scholars’ Lab, to digitally map the area known as “Proctor’s Ledge” – then a prominent rocky outcropping near Salem, Massachusetts, and now part of a quiet neighborhood near a Walgreens pharmacy.

Ray, Gist and a research team led by Emerson Baker of Salem State University pored over maps, court documents and other primary sources, then used digital mapping resources to pinpoint the site of the executions that concluded the notorious Salem Witch Trials.

College Choice, a self-described “independent online publication dedicated to helping students and their families find the right college,” has named UVA the No. 22 national research university in the country – the second-highest-ranked public university on the list, trailing only the University of California, Berkeley.

UVA “offers both the intellectual resources of a major research university and the intimacy and community of a liberal arts college,” the editors wrote.

The rankings are based largely upon academic reputation, financial aid, net price and graduates’ starting salaries.

Finally, the site ranked UVA No. 10 among “Colleges and Universities With the Happiest Freshmen.”

Nine UVA faculty members have been named to the annual Edu-Scholar Public Influence Rankings, which recognizes the 200 faculty members at U.S. universities who “contribute most substantially to public debates about education.”

The sixth annual rankings – compiled by former UVA faculty member Rick Hess, now a member of the American Enterprise Institute – were published Wednesday in Hess’ Education Week blog, “Rick Hess Straight Up.” They are based upon a variety of metrics that “recognize university-based scholars in the U.S. who are contributing most substantially to public debates about education,” including measures of publishing and press, Web and social media citations, according to Hess’ explanation.

Three UVA faculty members, including two leaders of UVA’s Curry School of Education, earned spots in the top 25. Carol Tomlinson, William Clay Parrish Jr. Professor and chair of Curry’s Educational Leadership, Foundations and Policy Department, rose to the 13th slot. Daniel Willingham, a professor of psychology in the College of Arts & Sciences and a scholar affiliated with Curry’s Center for Advanced Study of Teaching and Learning, ranked No. 18, and Curry School Dean Robert Pianta was rated the 25th-most influential university-based scholar.

Faculty from the higher education program were also recognized for their influence. Associate sociology professor Josipa Roksa ranked No. 125 and Michelle Young, a professor of educational leadership and policy who directs the University Council for Educational Administration, moved up to No. 167.

“The importance of our engagement as scholars in deliberations concerning policy cannot be understated,” Pianta said. “And the fact that our influence spans preschool to higher education shows the breadth of talent here at the University. As the country and states move to shape public education in the U.S., the University and Curry School will be a ‘go-to’ place for advice and solutions.”

Obama Appoints Willingham to Education Board

President Barack Obama announced Jan. 6 his intent to appoint UVA psychology professor Daniel Willingham to the board of directors of the National Board for Education Sciences, which oversees the Institute of Education Sciences – the statistics, research and evaluation arm of the U.S. Department of Education.

Willingham, who joined the UVA faculty in 1992, is the author of “Raising Kids Who Read: What Parents and Teachers Can Do,” “Why Don’t Students Like School?” and “When Can You Trust the Experts?” He is a contributor to American Educator magazine and a member of the Advisory Committee for Learning and the Brain.

Engineering Professor Gets Double Dose of Good News to End 2016

On Dec. 13, he was among 175 leaders of academic invention who were elected fellows of the National Academy of Inventors. Also last month, he was named acting assistant director for the Engineering Directorate at the National Science Foundation.

According to the announcement, “Election to NAI Fellow status is the highest professional distinction accorded solely to academic inventors who have demonstrated a prolific spirit of innovation in creating or facilitating outstanding inventions that have made a tangible impact on quality of life, economic development and welfare of society.”

The newest fellows will be inducted April 6 as part of the sixth annual Conference of the National Academy of Inventors, to be held in Boston. Fellows will be presented with a special trophy, medal and rosette pin.

Those elected to the rank of fellow are named inventors on U.S. patents and were nominated by their peers for contributions to innovation in areas such as patents and licensing, innovative discovery and technology, significant impact on society, and support and enhancement of innovation.

Johnson is one of five current or former UVA faculty members elected fellows of the NAI, including Jayakrishna Ambati, Joseph Campbell, the late John C. Herr and Thomas C. Skalak.

At the National Science Foundation, Johnson, currently on leave from the University, had been serving as acting deputy assistant director and division director for industrial innovation and partnerships within the Engineering Directorate. In his new post as acting assistant director, he will report directly to NSF Director France Córdova.

The UVA Cancer Center earned its America’s Best Hospitals for Cancer Care award based on criteria that include the availability of comprehensive patient care and research, as well as patient satisfaction. Award-winning hospitals must be accredited by the American College of Surgeons’ Commission on Cancer and are evaluated based on their patient recommendation rating from the federal Hospital Consumer Assessment for Healthcare Providers and Systems survey.

“I am pleased to see our team recognized not only for our high-quality care and research, but also for providing care that is focused on the patient’s needs,” said Dr. Thomas P. Loughran Jr., director of the UVA Cancer Center.

UVA earned its America’s Best Hospitals for Bariatric Surgery award by meeting criteria that include providing high-quality care and better-than-average patient satisfaction. To earn the award, bariatric surgery programs – which perform weight-loss surgery – must be accredited through the national Metabolic and Bariatric Surgery Accreditation and Quality Improvement Program and receive a patient recommendation on the Hospital Consumer Assessment for Healthcare Providers and Systems survey that is better than the national average.

“We are proud to be honored for our efforts to help patients lose weight and live healthier with our comprehensive treatment options and patient-centered approach,” Dr. Peter T. Hallowell, director of UVA’s bariatric surgery program, said.

Law Professor Named to Board of Prestigious Environmental Law Institute

School of Law professor Jonathan Cannon has been named to a three-year term on the board of the prestigious Environmental Law Institute.

The group specializes in producing research publications and sponsoring forums that target legal practitioners, environmental organizations and others, such as business leaders, whose decisions affect the environment both in the U.S and abroad.

Cannon, who directs the Law School’s Environmental and Land Use Law Program, joined the UVA Law faculty in 1998 from the Environmental Protection Agency, where he was general counsel (1995-98) and assistant administrator for administration and resources management (1992-95).

He is currently the Blaine T. Phillips Distinguished Professor of Environmental Law and the Hunton & Williams Professor of Law at UVA. His most recent book is “Environment in the Balance: The Green Movement and the Supreme Court.”

Leon will attend the association’s February conference in New York, and her paper is being considered for publication in Bloomberg BNA’s Tax Management International Journal.

The paper, “If the Commission ‘LOBs’ a Pitch to the ECJ, Will It Strike Out Again?” tied for the award. It looks at a 2015 European Commission infringement action against the Netherlands and explains how a potential court case stemming from that action could have a major impact on international tax law – specifically, the enforcement of limitation-of-benefits clauses, or LOBs.

She credits UVA Law Professor Ruth Mason for getting her interested in the topic during “EU Taxation,” Mason’s spring seminar class. As a former CPA with Deloitte Tax, Leon had a head start in her study of tax law before attending the Law School.

“I told myself I wasn’t going to do tax, because I did tax before coming to law school and I wanted to try something new,” she said. “But I took ‘Federal Income Tax’ my first year and really got into it again. The tax faculty are great here, so I kind of lucked out.”

After graduation, Leon will work for Caplin & Drysdale, a renowned law firm in Washington, D.C. She holds a bachelor of business administration degree in accountancy and political science from the University of Notre Dame.

Meet the New Cavalier on Horseback: She’s Eager To ‘Carry On a Legacy’ END_OF_DOCUMENT_TOKEN_TO_BE_REPLACED

Housing Changes Are a Breath of Fresh, Cool Air – Especially for Lawnies END_OF_DOCUMENT_TOKEN_TO_BE_REPLACED

Virginia Football – For All Virginia END_OF_DOCUMENT_TOKEN_TO_BE_REPLACED