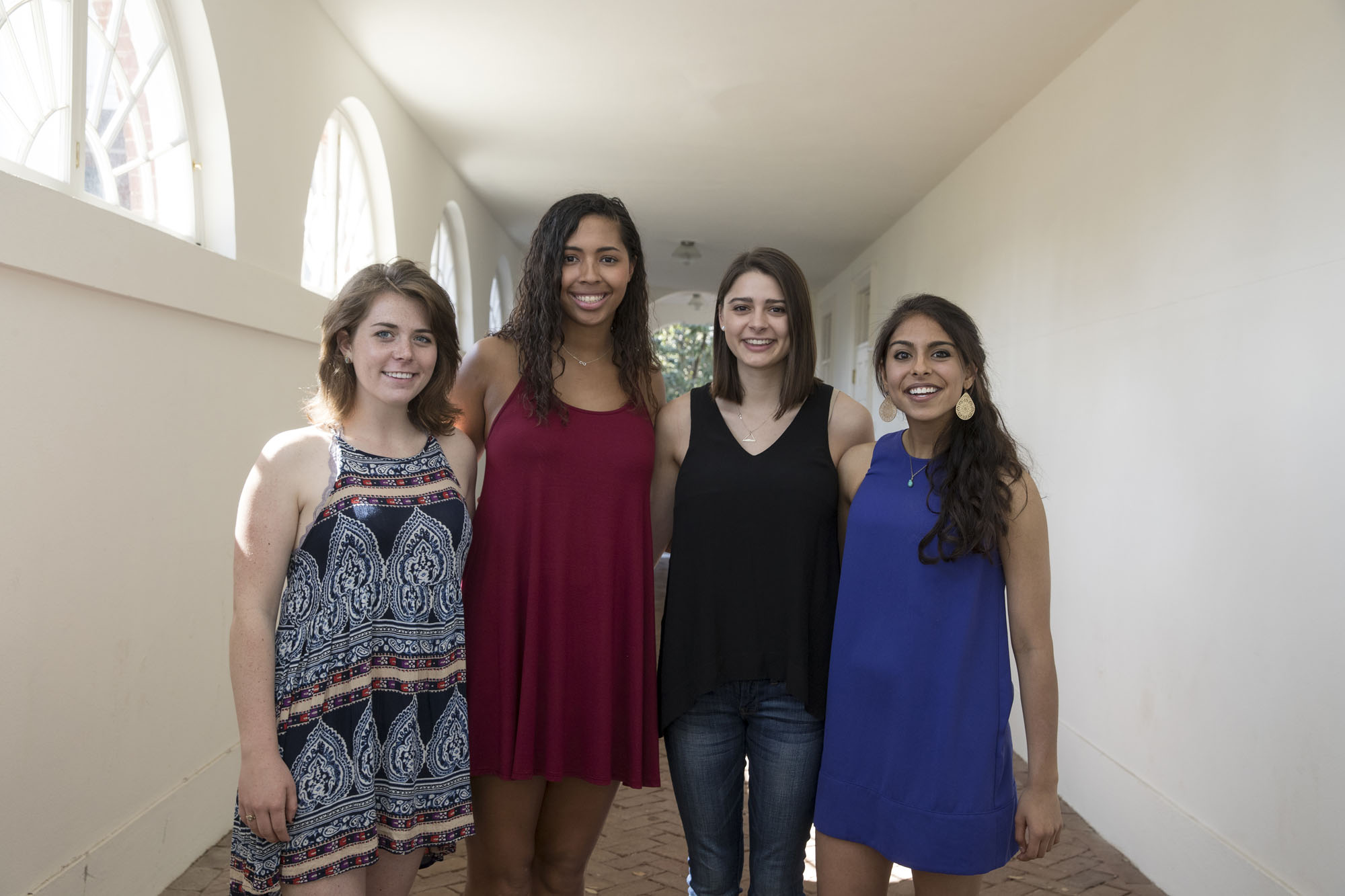 A quartet of University of Virginia students will spend their summer in the South Africa trying to rekindle a deeper appreciation of “ubuntu,” an African traditional philosophy focused on compassion and community, with a Davis Projects for Peace grant.

Jillian Randolph of Baltimore; Nanki Kaur of Ashburn; Madeline Curry of Fairfax; and Sophie Binns of Douglasville, Georgia – all second-year students majoring in global studies – will seek to create a youth development center in Khayelitsha, South Africa, one of the largest townships in the world. The quartet has also received a Jefferson Public Citizen award for their project.

This team is picking up the work a previous group of UVA students began in South Africa.

“We will create sustainable activities for youth through engaging the community in discussions of ubuntu, an African philosophy that emphasizes human commonality, community relations and compassion. It can best be captured by the phrase ‘I am because you are, and you are because we are,’” Randolph said. “We chose this topic as a result of the analysis of previous research and feedback from the women’s group we work with in the township. The women’s group calls themselves ‘Iliso Lamakhosikazi,’ which translates into ‘The Eye of the Woman.’”

Randolph, who has worked with at-risk youth in Baltimore for five years, is looking forward to creating programs and activities for the youth of South Africa.

Davis Projects for Peace awarded 120 projects nationwide $10,000 each for implementation this summer. The organization was the vision of philanthropist Kathryn W. Davis on the occasion of her 100th birthday in 2007. Until her death in 2013, Davis was intent on advancing the cause of peace and sought to motivate tomorrow’s leaders by challenging them to find ways to “prepare for peace.”

Randolph said she is pleased that their project was funded, since it is building on the work of others.

“We all are actually continuing research that was started about three years ago now,” Randolph said. “With this funding, we’ll be able to continue to build upon and extend the relationship with our community partners by integrating the results from previous research with member feedback.

“The idea of this project actually came directly from the women’s group that we work with in the township,” she said. “I know that they will be excited to see the work that we’ve been doing for the past couple of years materialize with the formation of a youth center.”

The students hope ubuntu can redirect the community’s youth from other temptations.

“The women’s group expressed deep concern regarding the unsafe activities youth engage with in their free time,” Kaur said. “Without formal after-school outlets, certain children resort to drug and alcohol use within makeshift taverns known as ‘shebeens.’ Thus, our goal is two-fold: to collaboratively design and implement after-school programming, and to better understand the rich, peace-building principle of ubuntu.”

Andrus Ashoo, director of UVA’s Center for Undergraduate Excellence, said the strength of the group comes from its members’ diverse backgrounds and collaborative methods.

“Since I have been at UVA, this is the first Davis project that is a collaborative endeavor by design,” Ashoo said. “The project will evolve as the team interacts with the host community to develop the most appropriate next steps. That’s exciting.”

Randolph, who is also minoring in health and wellbeing, is a varsity volleyball student manager, a Rotunda Ambassador, a member of the University Guide Service, a Second Year Council member and a recipient of the Stephanie Jean Charles Award and the Harambe II Award. A graduate of St. Paul’s School for Girls, she plans to join the Peace Corps after graduation.

An Echols Scholar, Kaur was part of a team that presented its research at the 2017 Human Development Conference at the University of Notre Dame. She has a minor in biology, is a member of the executive board for the Conflux Global Health Journal and the student advisory board of the Center for Global Health. She is a writer for Unsung People and a member of Alpha Chi Omega sorority. A graduate of Broad Run High School and the Academy of Science, Kaur hopes to work as primary care physician for Partners in Health.

​Curry, who is also a Spanish major, is a member of the Ski and Snowboarding Team and Alpha Chi Omega sorority. A graduate of W.T. Woodson High School, she plans a career in academia.

Binns is a member of Kappa Delta sorority. A graduate of Oak Mountain Academy, she plans a career in international development. After studying in Cape Town last year, she joined this research group as a way of maintaining contact with a community she had grown to love.

“It’s such an amazing opportunity,” Binns said. “Grants such as Davis are what allow us to establish and maintain these relationships across the globe, and our continuous presence in these communities is what makes the work real and meaningful. This research isn’t just defining our UVA experiences, it’s laying the foundations for our careers.”

Projects for Peace is open to undergraduates at the American colleges and universities that are partners in the Davis United World College Scholars Program.

A Year We Will Never Forget: 2019-20 in Review END_OF_DOCUMENT_TOKEN_TO_BE_REPLACED

‘What Will You Carry With You?’ Remarks From UVA President Jim Ryan END_OF_DOCUMENT_TOKEN_TO_BE_REPLACED