Algae: Biofuel of the Future? 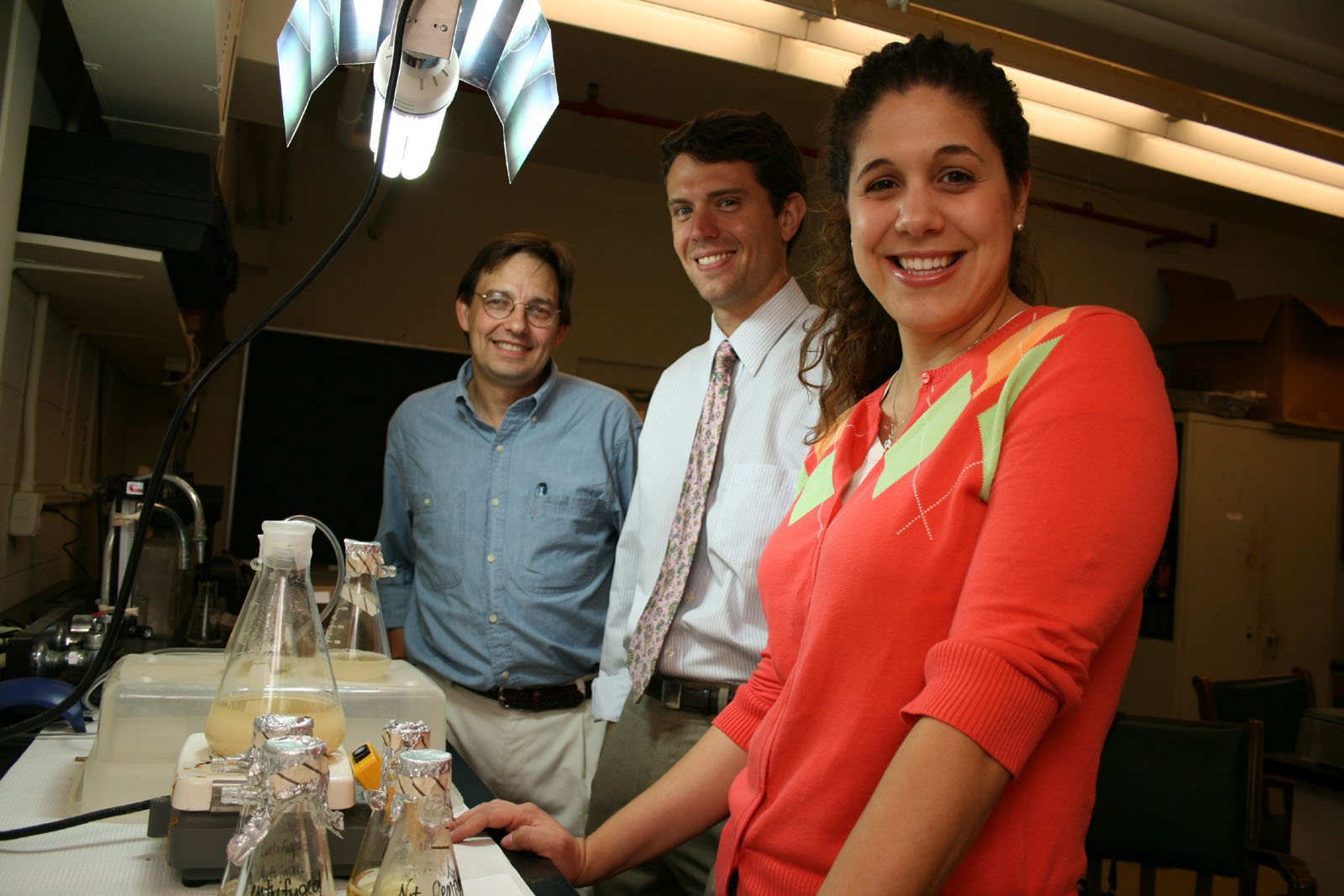 Environmental engineering professors Andres Clarens (center) and Lisa Colosi (right) have teamed up with commerce professor Mark White to investigate how algae may offer the biofuel of the future.(Photo: Melissa Maki)

Update: ABC13-TV out of Lynchburg, Va., ran a story on this new finding. Click here to watch.

August. 6, 2008 — In the world of alternative fuels, there may be nothing greener than pond scum.

Algae are tiny biological factories that use photosynthesis to transform carbon dioxide and sunlight into energy so efficiently that they can double their weight several times a day.

As part of the photosynthesis process algae produce oil and can generate 15 times more oil per acre than other plants used for biofuels, such as corn and switchgrass. Algae can grow in salt water, freshwater or even contaminated water, at sea or in ponds, and on land not suitable for food production.

On top of those advantages, algae — at least in theory — should grow even better when fed extra carbon dioxide (the main greenhouse gas) and organic material like sewage. If so, algae could produce biofuel while cleaning up other problems.

"We have to prove these two things to show that we really are getting a free lunch," said Lisa Colosi, a professor of civil and environmental engineering who is part of an interdisciplinary University of Virginia research team, recently funded by a new U.Va. Collaborative Sustainable Energy Seed Grant worth about $30,000.

With the grant, the team will try to determine exactly how promising algae biofuel production can be by tweaking the inputs of carbon dioxide and organic matter to increase algae oil yields.

Scientific interest in producing fuel from algae has been around since the 1950s, Colosi said. The U.S. Department of Energy did pioneering research on it from 1978 to 1996. Most previous and current research on algae biofuel, she said, has used the algae in a manner similar to its natural state — essentially letting it grow in water with just the naturally occurring inputs of atmospheric carbon dioxide and sunlight. This approach results in a rather low yield of oil — about 1 percent by weight of the algae.

The U.Va. team hypothesizes that feeding the algae more carbon dioxide and organic material could boost the oil yield to as much as 40 percent by weight, Colosi said.

Proving that the algae can thrive with increased inputs of either carbon dioxide or untreated sewage solids will confirm its industrial ecology possibilities — to help with wastewater treatment, where dealing with solids is one of the most expensive challenges, or to reduce emissions of carbon dioxide, such as coal power-plant flue gas, which contains about 10 to 30 times as much carbon dioxide as normal air.

"The main principle of industrial ecology is to try and use our waste products to produce something of value," Colosi said.

Research partner Mark White, a professor at the McIntire School of Commerce, will help the team quantify the big-picture environmental and economic benefits of algae biofuel compared to soy-based biodiesel, under three different sets of assumptions.

White will examine the economic benefits of algae fuel if the nation instituted a carbon cap-and-trade system, which would increase the monetary value of algae's ability to dispose of carbon dioxide. He will also consider how algae fuel economics would be impacted if there were increased nitrogen regulations (since algae can also remove nitrogen from air or water), or if oil prices rise to a prohibitive level.

The third team member is Andres Clarens, a professor of civil and environmental engineering with expertise in separating the oil produced by the algae.

The team will experiment on a very small scale — a few liters of algae at a time. They will seek to optimize the oil output by using a pragmatic engineering approach, testing basic issues like whether it makes a difference to grind up the organic material before feeding it to the algae.

Wastewater solids and algae, either dead or alive, are on the menu. "We're looking at dumping the whole dinner on top of them and seeing what happens," Colosi said.

Some of these pragmatic issues may have been tackled already by the various private companies, including oil industry giants Chevron and Shell, which are already researching algae fuel, but a published scientific report on these fundamentals will be a major benefit to other researchers looking into algae biofuel.

Published evidence of improved algae oil output might spur significant follow-up efforts by public and private sectors, since the fundamentals of this technology are so appealing, Colosi said. Research successes would also open the door to larger grants from agencies like the U.S. Department of Energy, and could be immediately applicable to the handful of pilot-scale algae biofuel facilities recently funded by Shell and start-up firms.